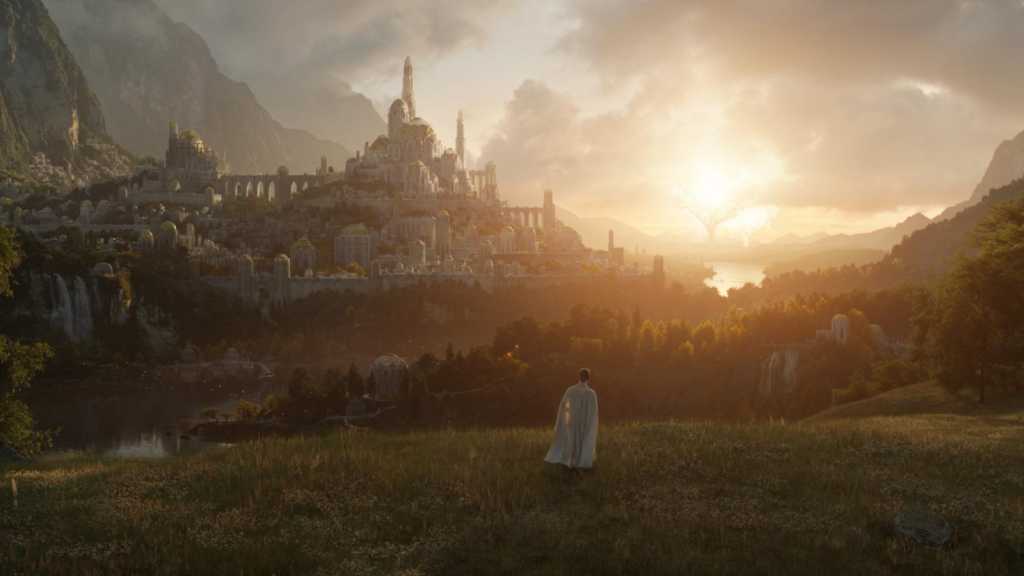 For most of the past decade, TV producers have been desperate to find ‘the next Game of Thrones’, and now Amazon apparently reckons it’s found it: Lord of the Rings.

The retail giant has reportedly spent an astonishing $250 million to secure the rights to an ongoing TV show set in Middle-earth, with a commitment to multiple seasons and the potential for a spin-off, all to air exclusively on its own Amazon Prime Video streaming platform.

The show now also has an official title – The Lord of the Rings: The Rings of Power – and its first full trailer ahead of a debut this autumn.

Here’s everything we know so far about the series. If fantasy is your thing, we also have a similar roundup for The Witcher.

When does The Lord of the Rings: The Rings of Power start airing?

We finally have a release date for the new Lord of the Rings TV series: 2 September 2022. The announcement was made on Twitter, along with a first look at the new series:

This date is a lot later than the original intention, which was the end of 2021. However, that’s to be expected considering all the production delays due to the pandemic.

This definitely won’t be a one-hit-wonder. Amazon has already commissioned a second season of the series, which will trade the classic filming location of New Zealand for the UK, much to the dismay of many fans.

It’ll be exclusive to Amazon Prime Video, Amazon’s rival to Netflix. You can get Prime Video as one of several benefits from a general Prime subscription, with other perks including free next-day shipping and Prime Music. Prime normally costs £79 a year, but you can always try it for free through a free trial.

The Hollywood Reporter unveiled that Amazon has spent a whopping $465 million on just the first season alone, making it one of the most expensive first seasons of a television show ever to be made.

Watch The Rings of Power trailers

The most recent trailer is from Comic-Con, with plenty of battles and stunning visuals:

The first full trailer for The Rings of Power is packed full of action. Watch it now:

Before that, we had a shorter teaser that set the tone for the show:

And before that we got the title reveal, which doesn’t include any actual footage, but is a cool enough clip that it’s worth watching in its own right:

There are also some character posters with close-ups of people’s hands – take a look at all of these below:

The Lord of the Rings: The Rings of Power cast and crew

Thanks to some recent announcements, we’ve now got a much better idea about who we’ll see strapping on some pointy ears or beard extensions for the series.

Aramayo will be standing in for Will Poulter, who had to pull out due to scheduling conflicts. He’ll be starring alongside Morfydd Clark, who will be playing the commander of the Northern armies, Galadriel, a younger version of the character played by Cate Blanchett.

Joseph Mawle – best known for his role as Benjen Stark on the fantasy giant Game Of Thrones – has been cast as the main villain of the show according to The Hollywood Reporter. He’s not the only GOT alumni onboard, as Robert Aramayo has also been cast as a young Elrond.

Noteworthy names in there are Peter Mullan (recently seen on Westworld) and British legend Sir Lenny Henry, who will be playing an unnamed harfoot elder.

Tom Budge was in the cast but has now left. He revealed in an Instagram post that he and the crew had creative differences, so he chose to part ways. He’s the second main character to leave after Will Poulter – though allegedly Poulter left due to schedule clashes.

We also know a bit about who’ll be behind the cameras. The first official announcement came in July 2018, with news that writing duo JD Payne and Patrick McKay would be “developing” the series.

They were involved in adapting Disney’s Jungle Cruise theme park ride into the Dwayne Johnson and Emily Blunt film and were also busy working on the script for the untitled Star Trek 4 (now unlikely to go ahead) for producer JJ Abrams.

Perhaps more excitingly, in July 2019 it was announced that Jurassic World: Fallen Kingdom director J.A. Bayona will be directing the first two episodes of the series, and will be an executive producer for the remainder.

You can find even more of the crew in what might be the first-ever ‘crew trailer’ for a TV show, which Amazon itself billed as the reveal of its Fellowship:

Wayne Che Yip will direct four episodes and will serve as an executive producer on the series. Yip has worked on Hunters, Preacher, Utopia and Doctor Who – so has a lot of experience with the fantasy genre.

Veteran fantasy director Charlotte Brändström is also set to direct two episodes. Brändström has previously worked on the likes of The Outsider, Madam Secretary, Jupiter’s Legacy, Outlander and The Witcher.

Finally, one of the original movies’ most iconic members is coming back too: New Zealand. Amazon confirmed that the new show will follow in Jackson’s footsteps by shooting in the southern hemisphere, so the landscapes should be just as epic as we’ve come to expect – though for the second season it’s moved to the UK, which will have to make do as a stand-in.

What’s The Lord of the Rings: The Rings of Power about?

The first thing we know is that the show “will explore new storylines preceding J.R.R. Tolkien’s The Fellowship of the Ring,” according to Amazon’s statement – which we now know means before both The Hobbit and The Lord of the Rings.

Over a series of tweets, Amazon teased the show’s setting using lines from the famous ‘one ring to rule them all’ poem, culminating in a tweet that simply said: “Welcome to the Second Age.” When his hiring was announced, director J.A. Bayona later confirmed that the audience will “discover the wonders of the Second Age, with a never before seen story.”

The teaser tweets also came with a map which you can find below:

For those unaware, the ‘Second Age’ is the period in Middle-earth history when Elrond founded Rivendell and Sauron began to build his power base in Mordor and forge the One Ring. It also saw him wage war with the Elves and other Middle-earth races not once, but twice – the latter including the battle in which the Ring is cut from his hand, immortalised in the prologue to the LotR films.

It’s a period that lasts over three thousand years, and as you can see from the place names on the map, this is a Middle-earth very different to the one seen in the films so far, with different kingdoms, cultures, and names.

Particularly noteworthy is the inclusion of the isle of Numenor in the west – this is the location of a human civilisation that was corrupted by Sauron in the Second Age and turned against the Valar – and was ultimately sunk beneath the sea for it, long before the events of The Hobbit. That means it’s never been seen on screen before.

The official teaser image is suspected to be of the city of Valinor, home of the immortal Valar. Den of Geek pointed out that the gold and silver coloured trees signify what period this image is set – the primordial period. This is before the Second Age, so it’s likely that this still is taken from a flashback/prologue.

The trailer showed off a human city set on the waterfront, which fans suspect to be Númenor.

We have an official synopsis for the show, which was originally reported by TheOneRing.net, and now confirmed by Amazon. You can read this below:

“Amazon Studios’ forthcoming series brings to screens for the very first time the heroic legends of the fabled Second Age of Middle-earth’s history. This epic drama is set thousands of years before the events of J.R.R. Tolkien’s The Hobbit and The Lord of the Rings, and will take viewers back to an era in which great powers were forged, kingdoms rose to glory and fell to ruin, unlikely heroes were tested, hope hung by the finest of threads, and the greatest villain that ever flowed from Tolkien’s pen threatened to cover all the world in darkness.

“Beginning in a time of relative peace, the series follows an ensemble cast of characters, both familiar and new, as they confront the long-feared re-emergence of evil to Middle-earth. From the darkest depths of the Misty Mountains to the majestic forests of the elf-capital of Lindon, to the breathtaking island kingdom of Númenor, to the furthest reaches of the map, these kingdoms and characters will carve out legacies that live on long after they are gone.”

Amazon apparently “may use material from the films,”, so its likely this will exist in the same universe as the film series, rather than rebooting it entirely.

If you were hoping that Peter Jackson would be involved, then we have some bad news. He has told The Hollywood Reporter that Amazon was initially in contact with him about the series, but then cut off communication.

He said the following: “They asked me if I wanted to be involved — [writer-producer Fran Walsh] and I — and I said, ‘That’s an impossible question to answer without seeing a script. So they said, ‘As soon as we get the first couple scripts, we’ll send them to you.’ And the scripts never showed up. That’s the last thing I heard, which is fine. No complaints at all.”

Jackson doesn’t harbour any hard feelings, and has stated he will be tuning in. In response to this comment, Amazon issued the following statement: “In pursuing the rights for our show, we were obligated to keep the series distinct and separate from the films. We have the utmost respect for Peter Jackson and The Lord of The Rings films and are thrilled that he is looking forward to watching The Rings of Power.”

Vanity Fair gave more of an inclination to who the show will be following: Galadriel, as commander of the Northern armies, and Halbrand, a castaway. The former is fighting for the future and is much brasher than her future self seen in the films (played by Cate Blanchett). Halbrand, however, is running from his past.

The series will open with Galadriel fighting for survival on a raft in the storm-swept Sundering Seas – a scene that was originally filmed right as the pandemic started to sweep the nation. The official trailer also shows her climbing up a frozen waterfall by using a gold and silver dagger and riding on horseback.

Harfoots, the hobbit ancestors in this era, will also feature in The Rings of Power. The series will explore ‘who shares the world of Middle-earth’, with forbidden relationships between elves, humans, harfoots and more all portrayed.

Matt Galsor, a representative for the Tolkien Estate and Trust and HarperCollins also explained that Amazon will “bring to the screen previously unexplored stories based on J.R.R. Tolkien’s original writings,” so we know it will at least partly draw on Tolkien’s own work.

There’s one big unadapted prequel – The Silmarillion – but since it reads more like a history textbook than a novel, it would be tough to adapt into an ongoing show. Still, Amazon could be taking it as a source of loose inspiration.

There are also a number of published books based on Tolkien’s notes and unfinished writings, such as The Children of Húrin or the Unfinished Tales compilation. Anyone keen to figure out what Amazon’s show will cover could do worse than reading all these books, as it’s almost certain that Amazon will be drawing on one (or more) of them to tell its story.

We do know that Amazon has signed a multi-season deal – so it’s clearly confident about the show – and also has the option for a second spin-off TV series if everything goes well.