iOS 12 was announced at WWDC, and is currently available as a Public Beta. It will run on the same iPads and iPhones as iOS 11 – none drop off this time around – and the final version’s release date has been confirmed to be 17 September.

We’re sure Apple is hopeful the new version will turn around the company’s recent bad luck with the mobile operating system.

iOS 11 hasn’t been a walk in the park, with several patches released to address bugs in TouchID, FaceID, unresponsive touchscreens and performance issues. Apple has also had to contend with Spectre and Meltdown, and it has faced criticism over  deliberately slowing down older iPhones via iOS updates.

According to a report by Axios, Apple decided to postpone introducing certain new features in iOS 12 in order to improve security and reliability, and it’s focusing on the same things for the next version of macOS, too.

These issues shouldn’t affect when iOS 12 is released, though. As we said, the Public Beta is available to try right now, having been released on 25 June.

iOS 12 will be available for download on 17 September as announced at Apple’s keynote event on 12 September.

What new features does iOS 12 have?

Apple must have taken that recent criticism to heart as it says iOS 12 will “make your device faster and more responsive”. Efforts have been focused on the oldest devices. For example, on the iPhone 6 Plus apps launch up to 40 percent faster and the keyboard comes up up to 50 percent faster.

In iOS 12, processor performance can ramp up instantly, and then instantly back down to save battery life. Under iOS 11, performance increases and decreases more slowly, leading to a less-responsive device.

So the rumours about ‘doubling down on performance’ were true, Apple is adding a good helping of new features in iOS 12. Here are 11 of the main ones

Apple has teamed up with Pixar to create a new file format for AR: USDZ. This sort of stands for universal description and will allow you to place objects in the real world in various areas throughout the operating system.

Adobe, for one, has embraced the new format, which it says is a great new way to bring AR to all iOS apps – including Photoshop and other Creative Cloud apps.

There’s even a new app – Measure – which is specifically for measuring objects in the real world. It will also detect rectangles, such as a photo and give you instant measurements. Apple says the system is accurate thanks to the tight integration between hardware and software.

The USDZ format also works on the web so you could browse for something you might want to buy and see how it looks in your home.

ARKit 2 brings a number of improvements to AR apps, including multi-player support which allows two people to play together and at least one other to spectate on another device.

This was demoed using a LEGO set, which was augmented with other virtual LEGO models and even the ability to have multiple people interacting with the AR set in real time. 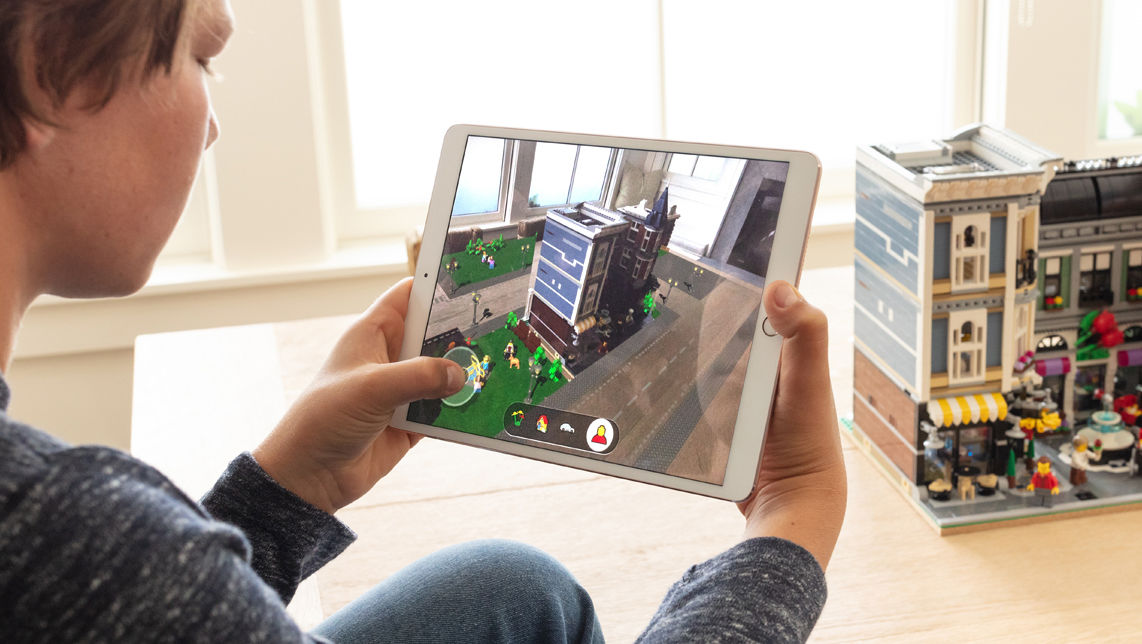 The primary new feature in Photos is Search Suggestions. This works a bit like Siri Suggestions and will offer up photos before you even start typing. You can now search for places and events, and you can use multiple search terms.

A new ‘For You’ section brings an On this day feature, and suggests effects you might want to add to a particular photo. A bit like Google Photos, then. 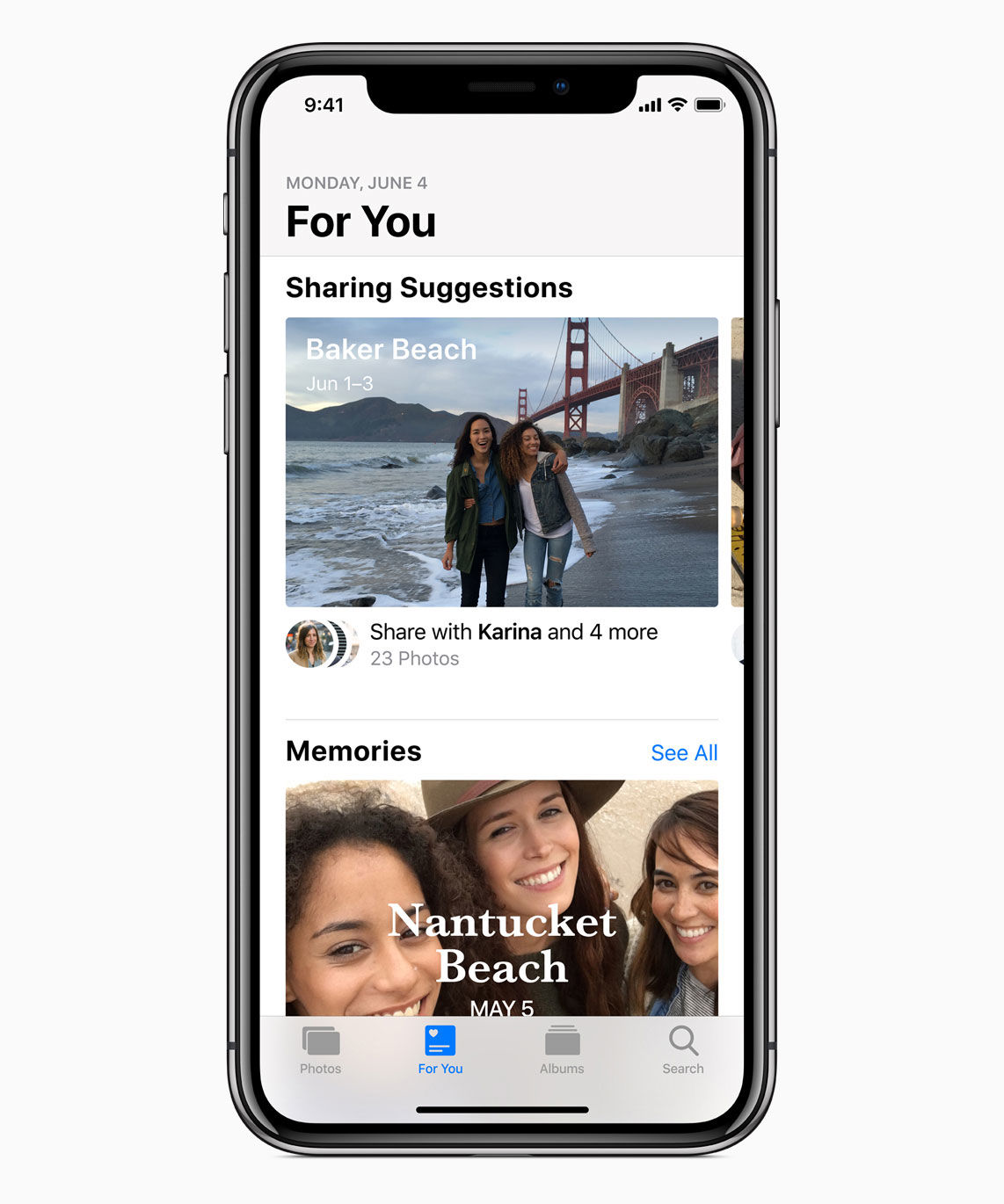 It will also suggest photos you might want to share and who with, based in part on who is in them. If you share them with another iPhone user it will search their library for photos taken at the same place or event and suggest they share them with you. And as it’s based on iMessage, you get the usual end-to-end encryption.

There’s a new Shortcuts app in iOS 12 which is essentially a way to create macros with Siri. It’s a bit like a mashup of IFTTT and Scenes which allows you to record a custom phrase and make things happen. But you’ll also find a bunch of pre-made shortcuts that you can use straight away. 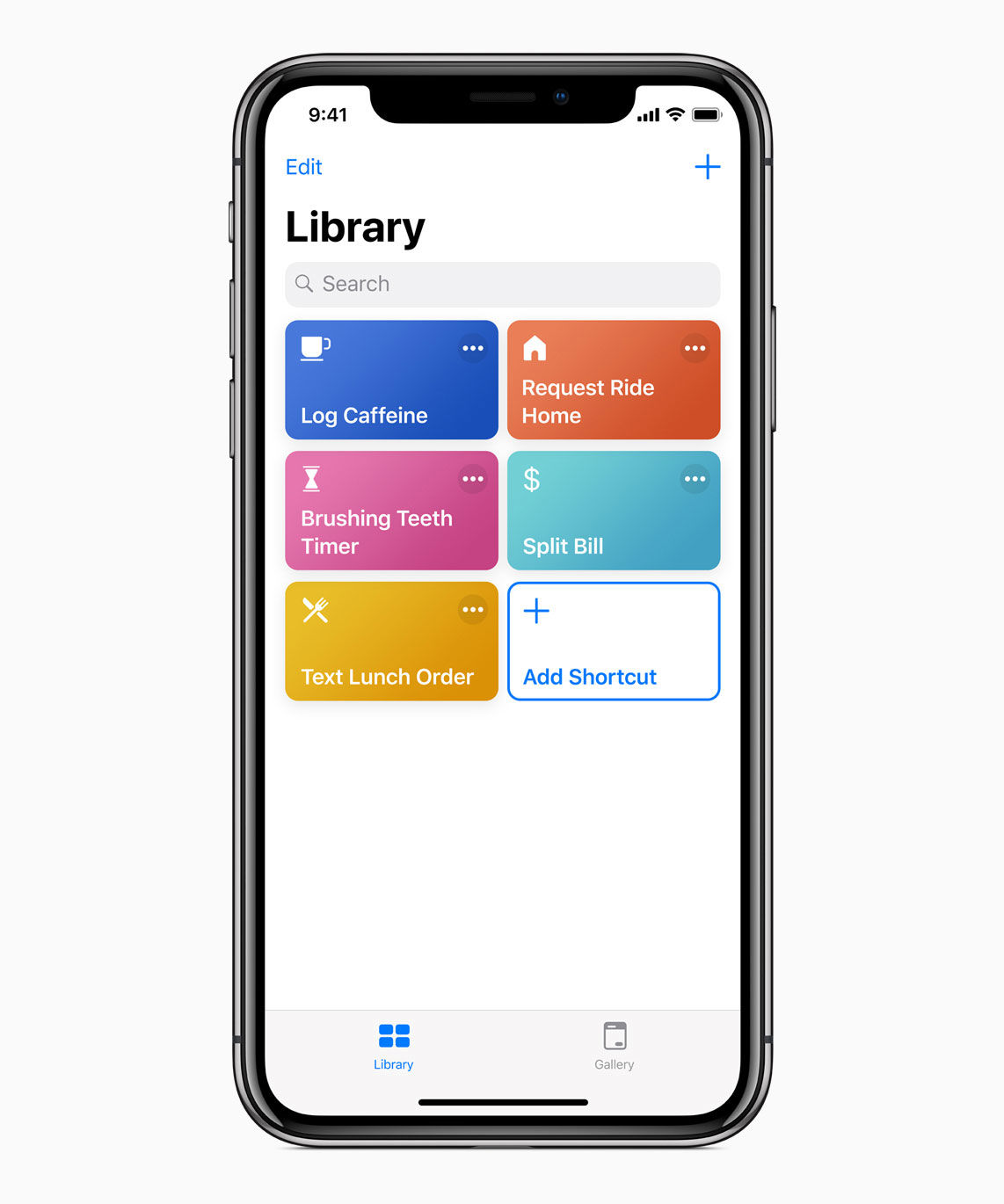 Shortcuts can be as simple as bringing up a hotel address when you say “travel plans” or as complex as telling Siri you’re heading home at which point your shortcut might make the heating turn on, give you an estimation of how long it will take you to get there (with traffic information via Apple Maps) and tune in to your favourite radio station.

The Stocks app is finally coming to the iPad, and on both iPhone and iPad will include business news.

Another app coming to the iPad is voice memos – recordings sync between your devices.

iBooks has been renamed Apple Books, and several features have been added including ‘Reading Now’ which gives you a thumbnail image of the book you’re currently reading.

Much has been made of our addition to phones (and tablets) recently. To combat this, Apple has added three main features to iOS 12.

First there’s improvements to Do Not Disturb. This already mutes the phone at certain times, such as night. But there’s a new feature called Do Not Disturb during Bedtime which mutes notifications on the lock screen so you don’t get distracted when you check the time. 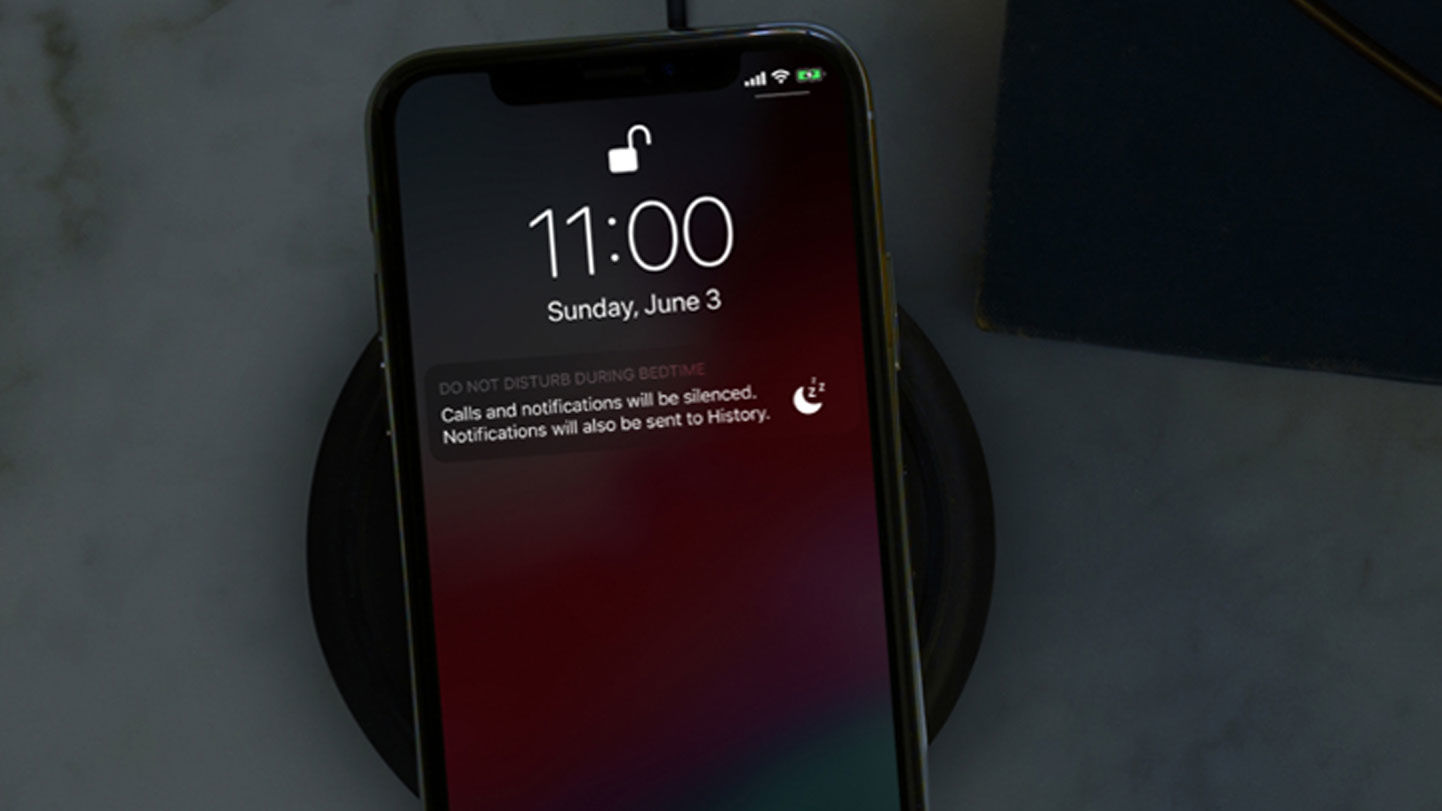 The shortcut for Do Not Disturb on the Control Centre now allows you to pick from various options including:

There’s also a new ‘instant tuning’ option available when you receive a notification. A deep press on it brings up new options to turn off notifications temporarily for that app or permanently.

More importantly, notifications can now be grouped per app, preventing them becoming overwhelming. 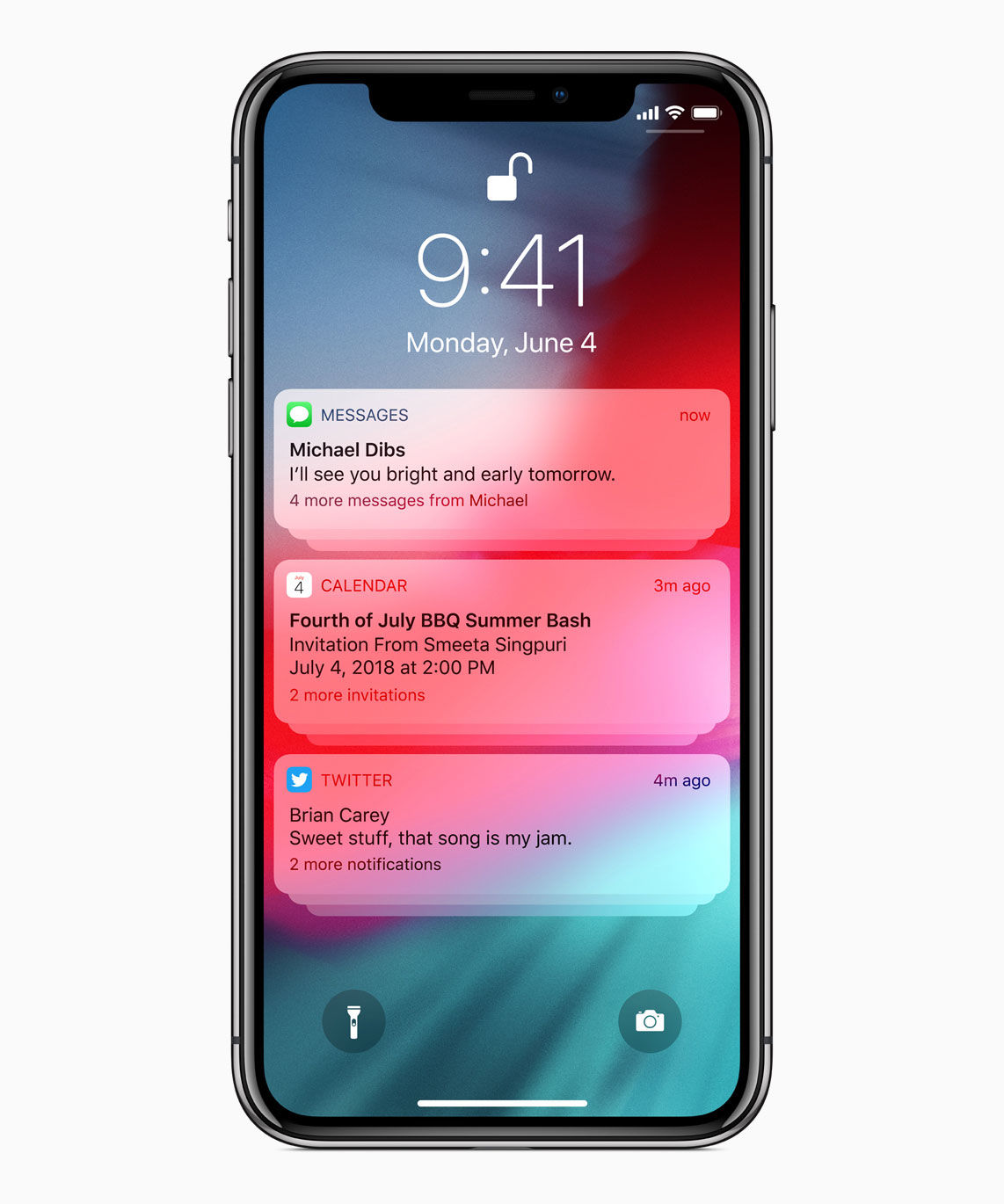 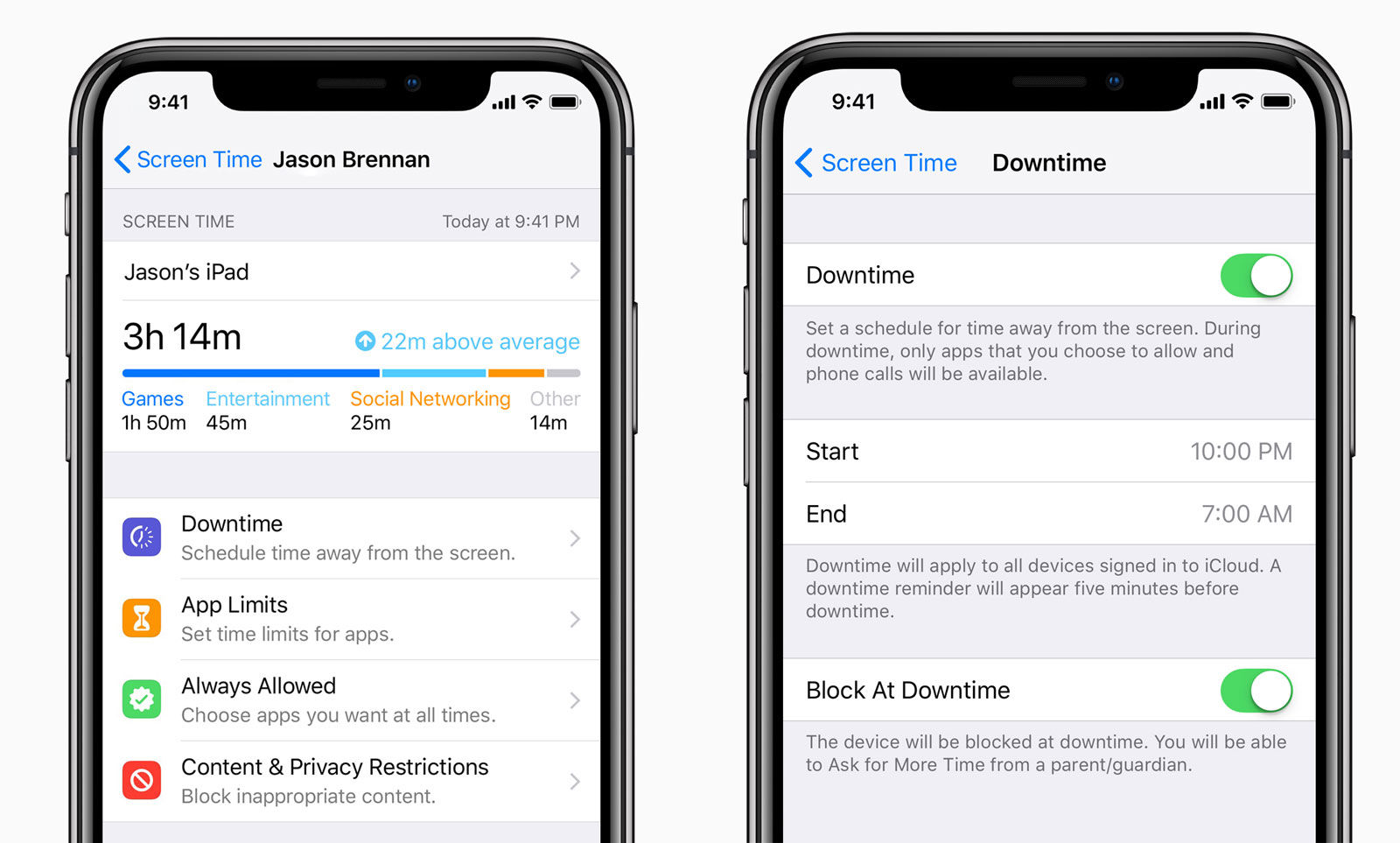 App Limits let you set your own limits for how long you want to use each app each day. The app also gives you a daily summary showing information such as how long you spent using different categories of app, how many notifications each app is giving you and even how many times you’re picking up your iPhone or iPad each hour and which apps you tend to open first. 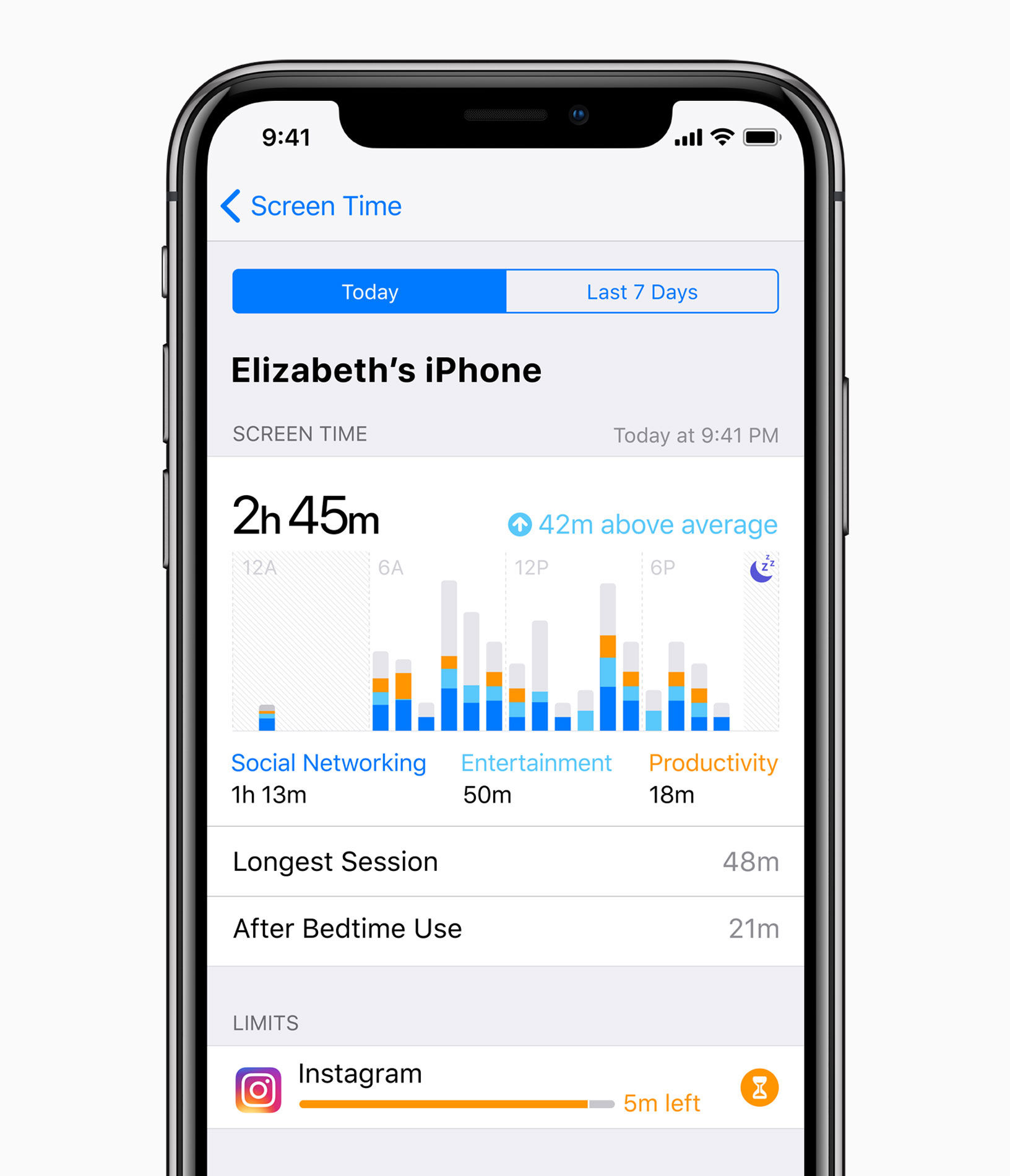 Screen Time works across iOS devices, so as a parent you can choose to see a summary of your child’s daily use, too.

For those with an iPhone X, Animoji have been enhanced with tongue detection so you can make the unicorn stick its tongue out. Plus, there are new models and – most gimmicky of all – you can now create your own custom animoji, called a Memoji, using a vast array of customisation options. 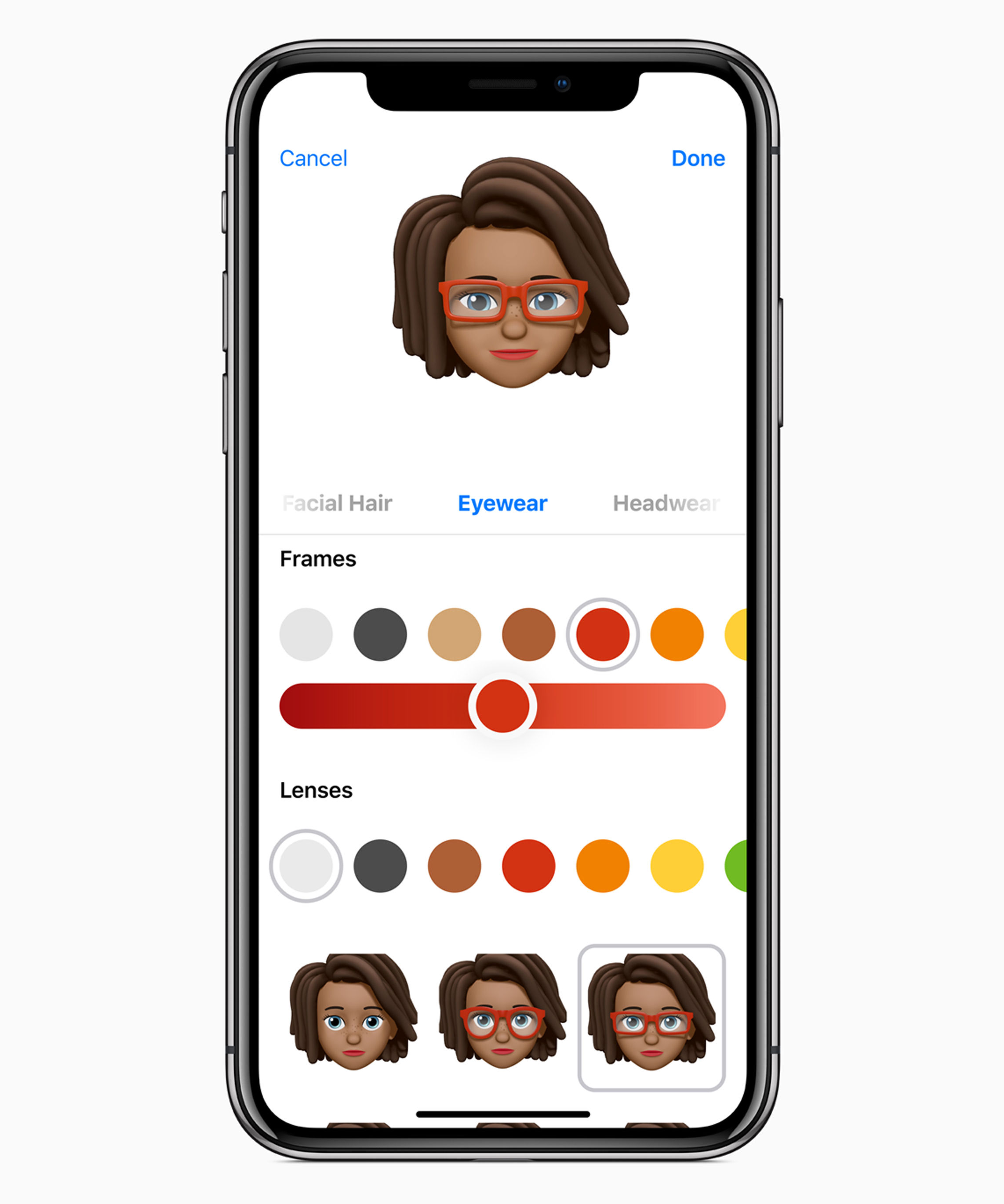 In Messages, the camera lets you add stickers, filters and even your animojis live. The same happens with the front camera in other apps such.. FaceTime.

In iOS 12, you’ll be able to use FaceTime with up to 32 people. Group calling was previously impossible with Apple’s video calling app, but now it has caught up with some of its multi-platform rivals.

But of course, it looks great and each person’s video tile automatically enlarges when they speak. People in the ‘roster’ at the bottom of the screen automatically get added to the main screen when they speak, or you can tap on a tile to achieve the same thing manually. 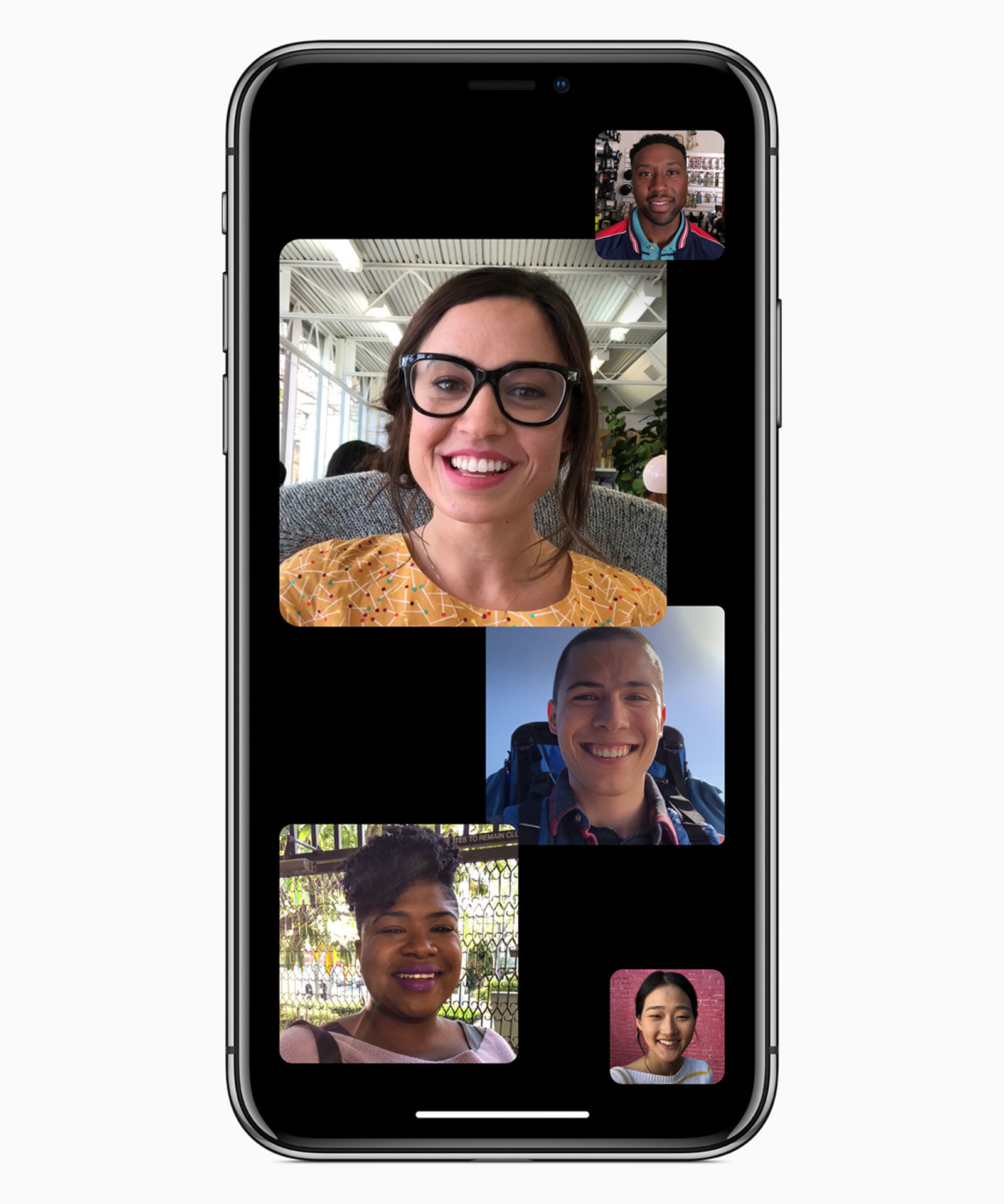 That’s right. The moment CarPlay fans have been waiting for. No longer do you have to use Apple maps! With iOS 12 on your phone, you’ll be able to fire up Waze instead.

So those are the main new features, but don’t forget that there were others rumoured ahead of iOS 11 which haven’t yet made an appearance.

They could be introduced in small updates throughout the year, but equally they could appear in iOS 12. Or not at all. We’ll just have to wait and see.

Also, let us know in the comments below which features you want to see in iOS 12.

Many an iPad owner has wished for the ability – just as you have in Android – to create multiple users and switch between them. This makes sense for lots of reasons, including seeing your own music library, email, calendar, photos, bookmarks and preferences (such as favourite TV shows in iPlayer and channel subscriptions in YouTube).

It was rumoured that Apple will add user profiles to tvOS at some point because this truly is a shared device, and this has led to speculation that it might also (finally) bring them to iOS as well.

But don’t expect to be able to see account switching on an iPhone: if it does arrive, it’ll just be for iPads.

For now, here’s how to lock apps and folders in iOS 11.

There has been a long-running rumour that Apple will introduce a ‘dark mode’ which will provide a dark theme or background in apps and throughout iOS. This should help reduce brightness when using your phone in total darkness. Currently, the light colours iOS uses are still too bright in some environments even with the brightness slider set to minimum.

However, this could be implemented in iOS 12.

We’ve moaned about this in our iOS reviews for few years now, the frustration that camera settings aren’t in the Camera app. If you want to switch between 1080p at 60fps and 4K at 30fps (for example) you have to spend about 20 seconds doing it through the Settings app.

All we want is a simple cycle through the few modes in the Camera app itself. Is that so much to ask? Alternatively, an auto-switching mode which drops the frame rate in low light would be an acceptable workaround.

Now, in iOS 11, there are new settings, such as whether to save photos as HEIC or JPG and whether or not to enable QR-code scanning and it would make so much more sense to put these in the camera app.