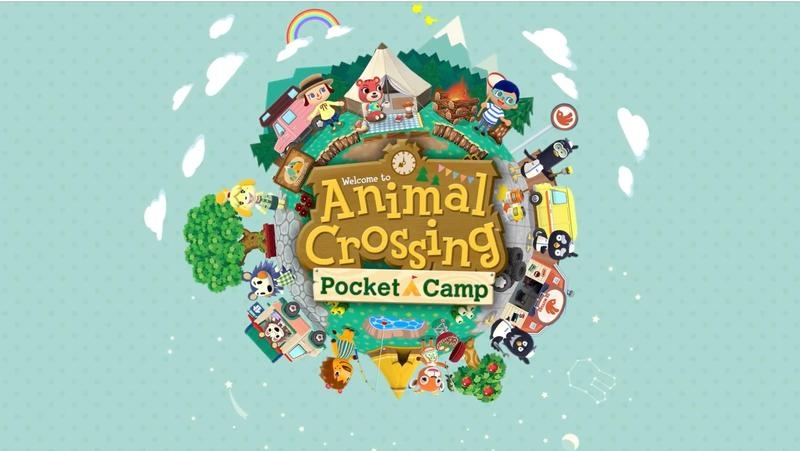 Nintendo’s new mobile game Animal Crossing: Pocket Camp, available now for Android and on iPhone, is an addictive little number but frustrating at times. There are lots of built-in delays and there never seem to be enough of the necessary resources, whether wood, steel or coconuts.

In this article we offer 10 tips that will help you to do well at Pocket Camp.

Play regularly (but for short periods)

The Animal Crossing games have all tended to suit a ‘little but often’ approach – they are perfect for dipping in, catching a couple of butterflies, moving some furniture around and popping out again. (This was one of the reasons why the game was an obvious candidate for a mobile port.)

This is particularly true for Pocket Camp. There are rewards for logging in frequently – as your daily login streak gets bigger, you receive better and better stuff for free – while the array of timers and delays (and the tendency for one or two particular fishes or insects to dominate at a given time) mean there’s generally a limit to how much you can achieve in one go. Get a few jobs done and then come back later. 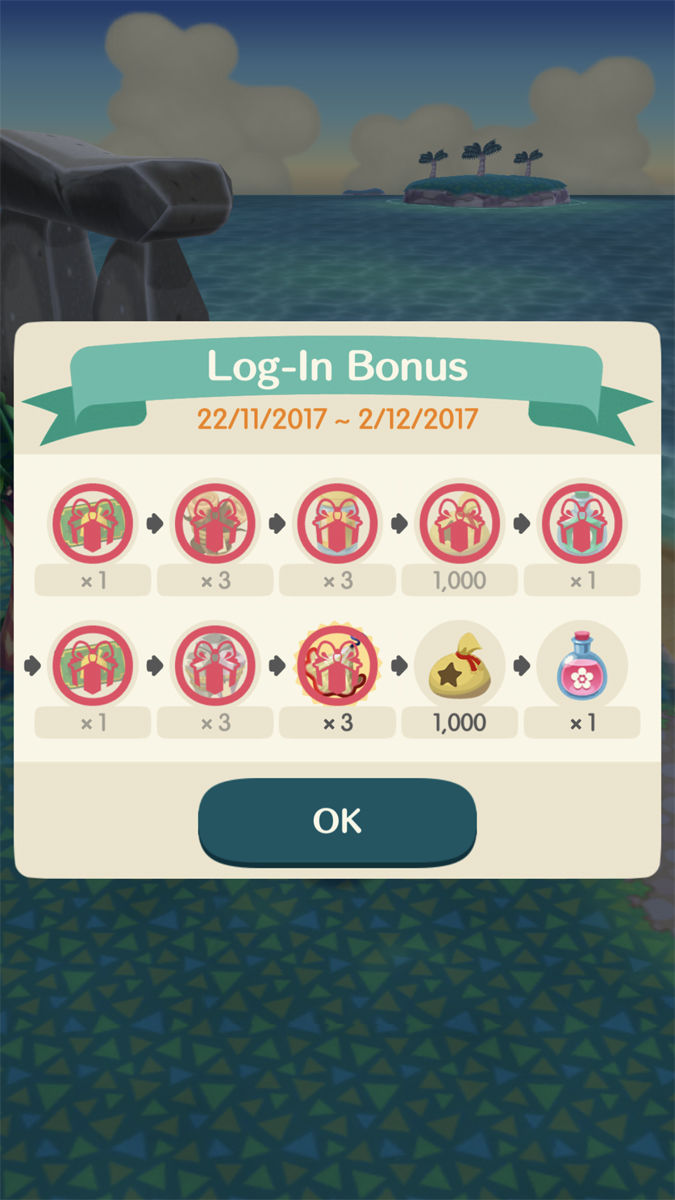 This will also help you avoid making in-app payments, because skipping the timers is generally expedited by Leaf Tickets.

You can pay to speed things up

We don’t recommend this – the real-world expense is disguised by the fictional currencies, so it can mount up, and it goes against the spirit of the game in any case – but if you can’t be bothered to wait it’s possible to spend your way out.

Throw nets can be used on the river and sea levels to pull in a group of fish at once with no danger of failure; the larger ones can be bought with Leaf Tickets. The same principle applies to honey, which scoops up multiple insects on Sunburst Island.

Leaf Tickets can also be spent to speed up the building of craft items or amenities. And you can use fertiliser to make trees grow fruit immediately.

If an animal has stopped giving you quests, you can ask for more by spending a Request Ticket. And Calling Cards let you summon an animal who isn’t currently available, instead of having to wait.

Focus on new and low-level friendships

Probably not a tip to apply to real life. But in Pocket Camp you’ll generally get better ROI from helping new (or neglected) friends where your Friendship Level is fairly low.

Your Friendship Level with an animal gains a few points each time you do a job for them, and when this happens enough times it will go up to the next level, and you’ll get a boost to your XP – which is how your overall level goes up. However, the higher an animal’s Friendship Level gets, the more tasks you’ll have to do to make it go up another level.

(In fact, the first time you speak to an animal, the level will go up from 0 to 1 just for that, and you’ll get a little XP boost for nothing.) 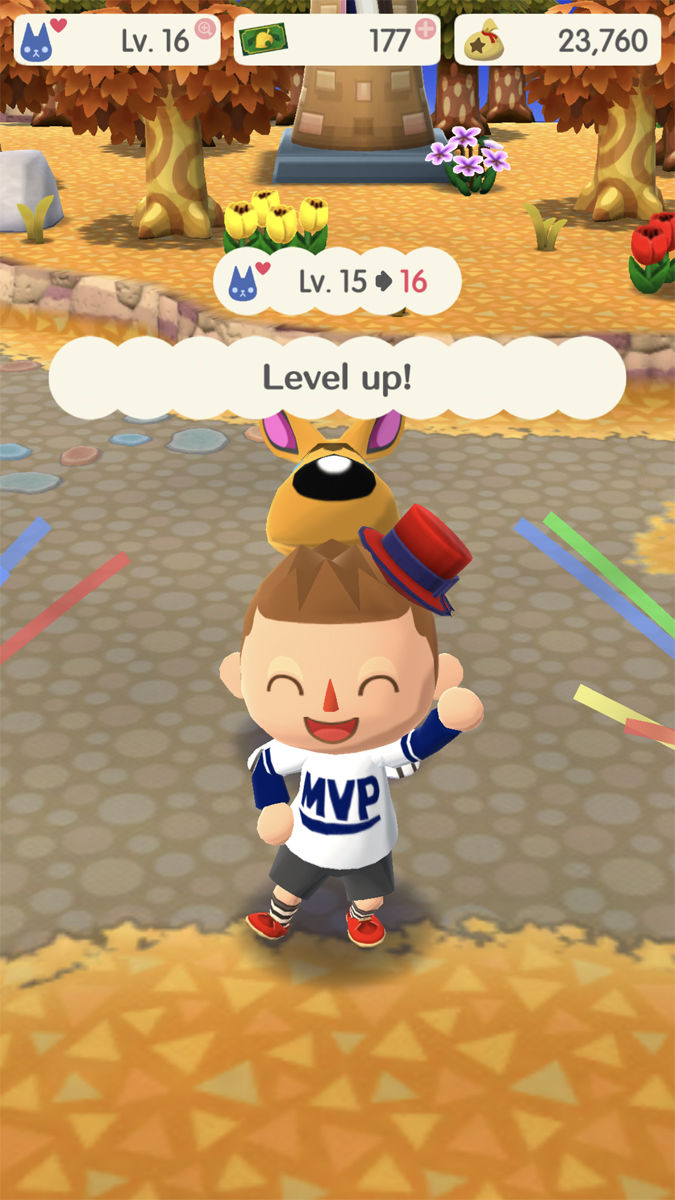 There is an exception to this, and that’s when you want to accomplish something specific. Animals will have to reach a certain level before they will come and visit your campsite, for instance, and each one will offer a range of cool unique rewards when they hit the very high levels. And of course after a while you’ll only have mid- and high-level friendships to cultivate.

But when you’re trying to get some easy boosts to your level, it’s best to focus on the low-hanging fruit.

Interaction with other humans playing Animal Crossing is a bit dry, but it’s still worth making plenty of friends if only for the benefits this provides in-game. Lots of timed goals providing lots of important resources depend on you visiting a certain number of friends’ campsites and giving them ‘kudos’, and it’s impossible to visit the quarry location (without spending Leaf Tickets) unless you can get five friends to help.

You’ll see non-animal characters in each of the game’s locations; these are real players, although you won’t see them do anything very interesting. But if you go and tap on them you’ll get the chance to make friends – ie send a friend request. 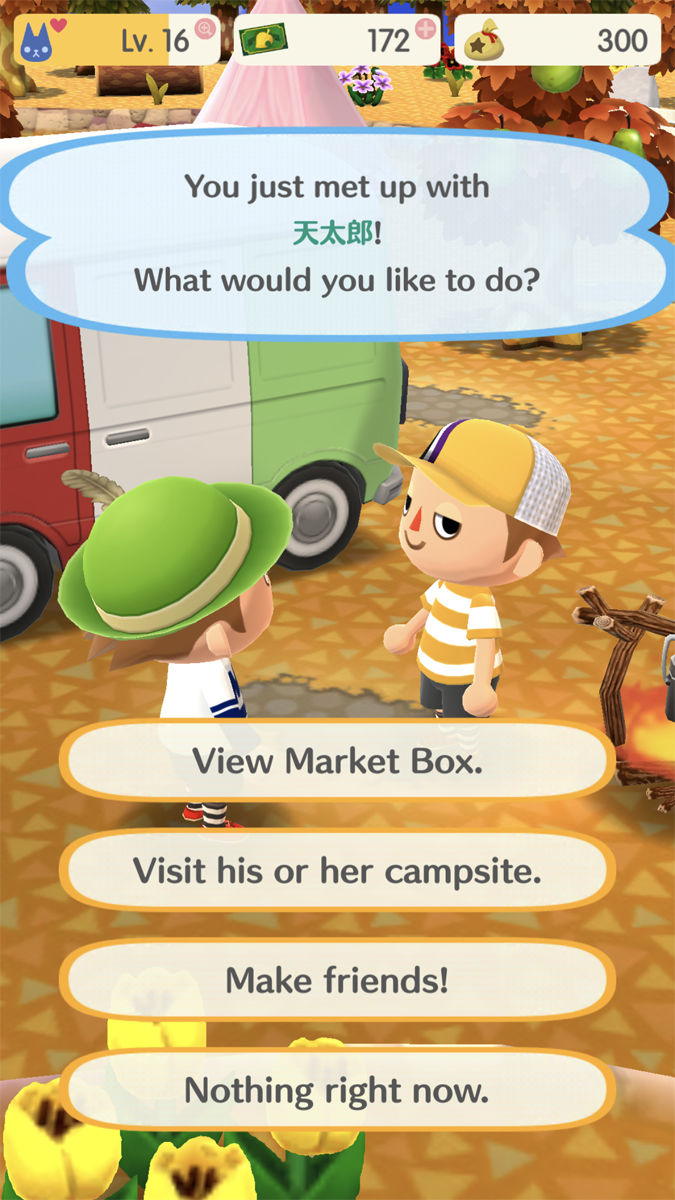 Your friends’ details are accessible, not from the Contacts menu as you might expect, but from the slide-out menu just below your bells. Tap the icon with two people standing next to each other to see all your friends, and details of who has given you kudos lately. This menu will also contain friend requests from others, so be sure to check it regularly.

How to get animals to visit your campsite

To get these guys to come along too, tap them and check out their ‘special requests’ – these are the criteria that must be fulfilled before they’ll turn up. You’ll need to hit a certain Friendship Level with them, but mostly the list will be items of furniture you need to craft.

When you craft all the necessaries, the game will encourage you to invite that animal to visit. And at this point you have two options: you can arrange the required furniture yourself (the animal will demand that it be available to sit on, play with etc, not just tucked away in your inventory), or you can get the game to do it for you.

The nice thing about this is that the game will also offer to revert the campsite layout back to the way it used to be after your new friend has settled in. Oddly enough they won’t flounce off when you get shot of their favourite chair: it just needs to be there for the induction ceremony. 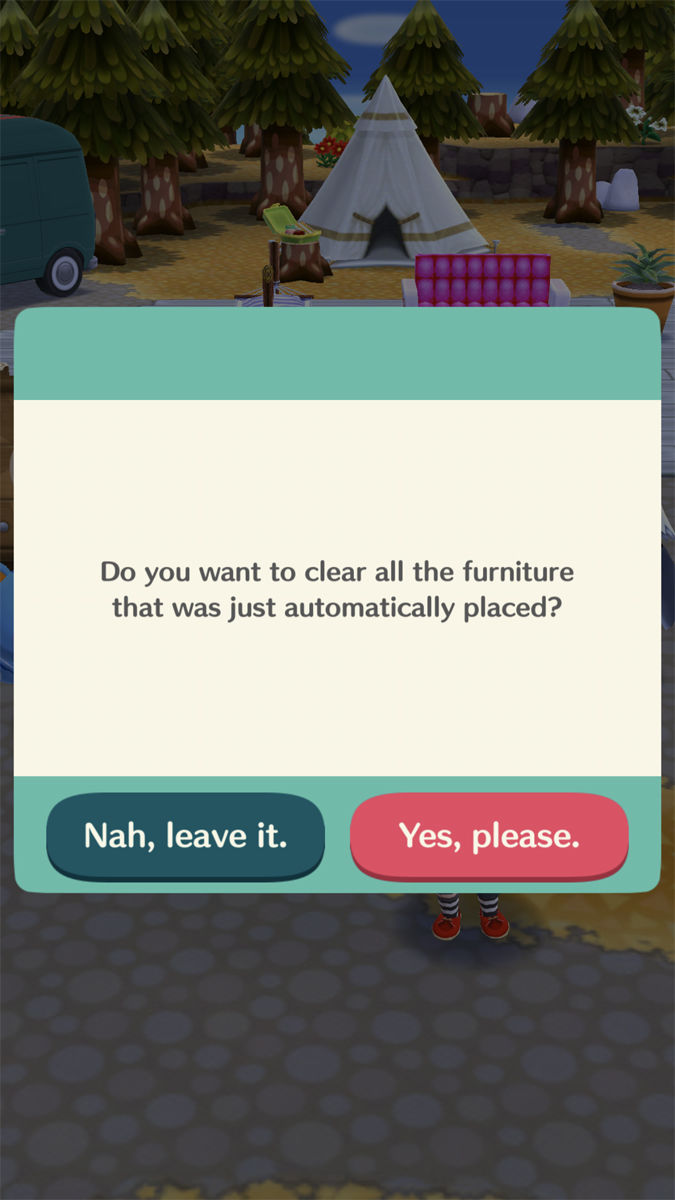 Don’t forget to collect your rewards

The rewards you get for going up a level, hitting a goal and so on are not paid directly into your inventory; instead, they are posted to your mailbox. And they don’t stay there forever – so it’s important to collect them before they expire.

Tap the icon at the top right, just below your bells, and then tap the mailbox icon on the righthand end of the menu that appears. Then tap Collect All. 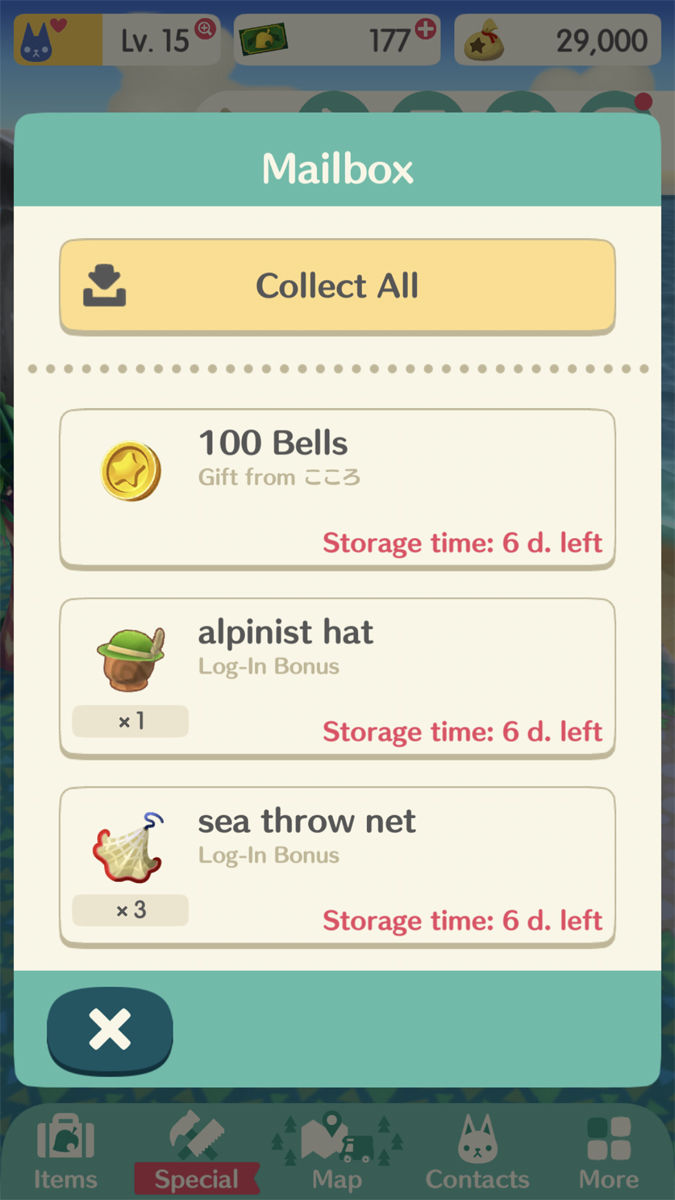 Fish shadows help you identify them

Pay attention to the size of the shadow that lurks in the sea or river, because it gives you an idea of what kind of fish is casting it. Flounders are big, squid are medium-sized and pale chub are tiny, for example. This can help if you’re trying to haul in a specific catch.

Fish and insects (seem to) turn up in groups

Whether it’s based on time of day, the day/night cycle or just random chance, experience suggests that a given location at a given time will tend to spawn lots of fish and insects of the same type. If you’ve been tasked with catching 15 squid, and you just pulled in two of them in a row, stick around and see if you can get some more, because it’s probably good squid conditions. The reverse applies if flounders can’t be had for love nor money – come back later. 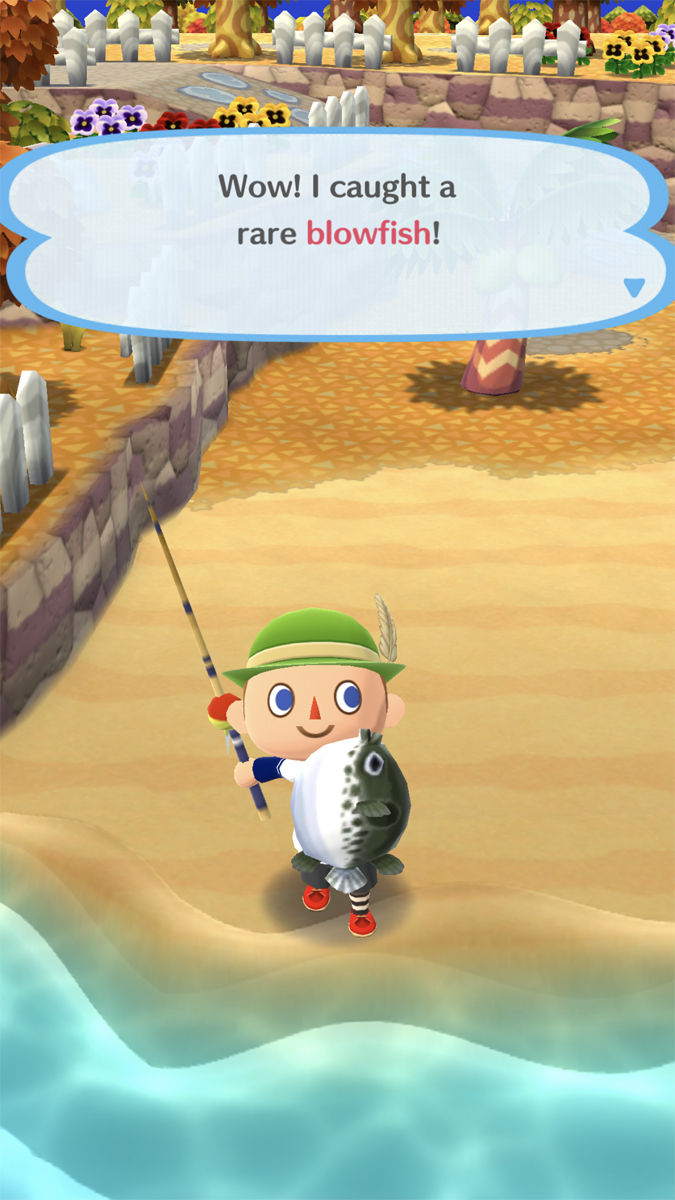 Be careful with insects

Tapping an insect, or tapping the water close to a fish’s head, will trigger a ‘catch’ animation with rod or net, and you must tap the screen again when instructed to complete the capture. This takes a little timing, but is pretty easy.

A bigger worry is that if you bump into the tree that a beetle is sitting on, or walk into a butterfly, it will (understandably) fly away. In other words, be careful that you tap the insect itself to trigger the catch animation, rather than just next to it.

Take out a big loan, and don’t worry about paying it back

Another one to avoid in real life! But the way Animal Crossing: Pocket Camp deals with loans is strange, and our advice would be to take the loans and not worry very much about where the money is coming from to pay them back. There aren’t any penalties or incentives not to.

The loans are part of the process by which you upgrade your camper van, which happens at OK Motors. If you want to expand your vehicle, a loan is automatically and unavoidably the way you’ll pay for it, even if you’ve got enough money in your wallet right there and then. (The other odd thing is that Giovanni doesn’t tell you how much it will cost until the work is done!)

But there are no interest payments or penalties for long-term non-payment, and it’s best to regard this process, as the game appears to do, as simply a form of medium-term quest: get 30,000 bells and you can add a level to your vehicle. It’s just that, thanks to the loan system, you get the upgrade right away, and then work to pay for it… at which point your reward is that you can immediately get the next upgrade and work towards that.