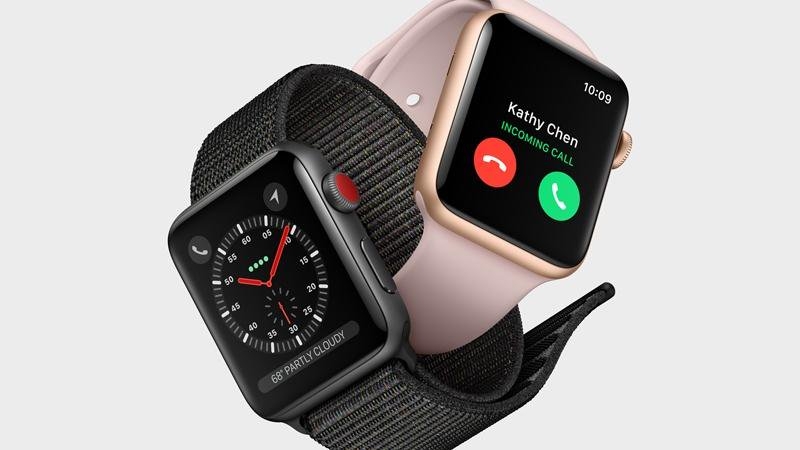 The Apple Watch Series 3 was announced at Apple’s September 2017 launch event and is now officially on sale. It brings with it a handful of tweaks and features, including one big one: the option for a version with its own cellular connectivity.

So, if the new Apple Watch has piqued your interest, where can you get one? Here are all the places you can pick up an Apple Watch 3, with or without the cellular data option.

Buy it from Apple

Naturally, Apple’s own store will be the first port of call for most people looking to buy the Apple Watch. You can either visit a physical Apple shop (which we’d recommend for first time Watch owners purely so that you can compare the 38mm and 42mm models on your own wrist) or head to the online shop.

Buying from Apple online lets you buy either the regular GPS model (from £329/$329) or the GPS + cellular edition (from £399/$399) and you can buy either in a variety of different cases and bands.

Bear in mind that if you buy the cellular edition of the watch from Apple, you’ll still need to pay your phone carrier to link the Watch to your phone number – in the UK, it’s an EE exclusive, but US owners will get more choice.

The Apple Store also offers the Nike and Hermès versions of the Watch, and the Apple Watch Edition, which comes in a ceramic case.

Finally, Apple naturally also sells a whole range of other straps and accessories for the Watch (including several straps that aren’t options when you’re buying the Watch itself), so you can further customise it to your liking.

Buy from another retailer

If you don’t want to buy directly from Apple, you might find a better price by looking at alternative retailers.

You can also buy the Apple Watch from most major electronics retailers, which might help you find more competitive prices or offers – especially during big sales events like Black Friday. Bear in mind though that they’ll usually have fewer case and band options than Apple itself.

In the UK, take a look at Currys, John Lewis, Amazon, and Argos; if you’re in the US you probably want to look at Amazon, Best Buy, and Target.

Buy from a carrier

Finally, if you’re specifically looking for the new cellular version of the Apple Watch, you might want to try buying it directly from a phone carrier. Bear in mind that you’ll need your Apple Watch to be on the same carrier as your iPhone, and that you’ll have to pay a £5/$10 monthly surcharge for adding the Watch to your plan – not including data usage.

In the US, the Apple Watch 3 will be supported by AT&T, Sprint, T-Mobile, and Verizon, so as long as you’re already on one of those networks you should be able to easily add the Apple Watch on. All of those are selling the Watch either outright or on credit, and will be charging $10 per month to add an Apple Watch to a plan, along with waiving their usual activation fee – and in some cases reportedly offering the first few months of service free.

It’s a little tricker in the UK – EE is the exclusive launch partner for the Apple Watch, so you can only use the cellular capabilities if EE is your network – meaning you not only have the buy the Watch, but you might also have to change your phone contract.

The bigger issue with buying from EE is the available plan – right now the company is only selling it on a £25 per month plan with unlimited data. That gets you the Watch with no upfront charge (or £29.99 for a 42mm size and more for the stainless steel), but costs £600 over the 2-year contract for the cheapest model – so you’re paying £200 just for the data, on top of your main phone contract.

That means you should be able to get better value by buying the Watch elsewhere and paying EE’s £5 monthly surcharge – which only kicks in after the first six months anyway, and includes a generous 10GB data a month. That would only cost £90 over the equivalent 2-year period – far less than £200 – without locking you into a contract.

It’s a similar situation in a few other countries too – check Apple’s list of partners to find out which carriers support the Apple Watch in your country.

Do note that the Apple Watch 3 LTE does not support roaming, so any additional features enabled by the e-SIM will not work when you take it abroad.