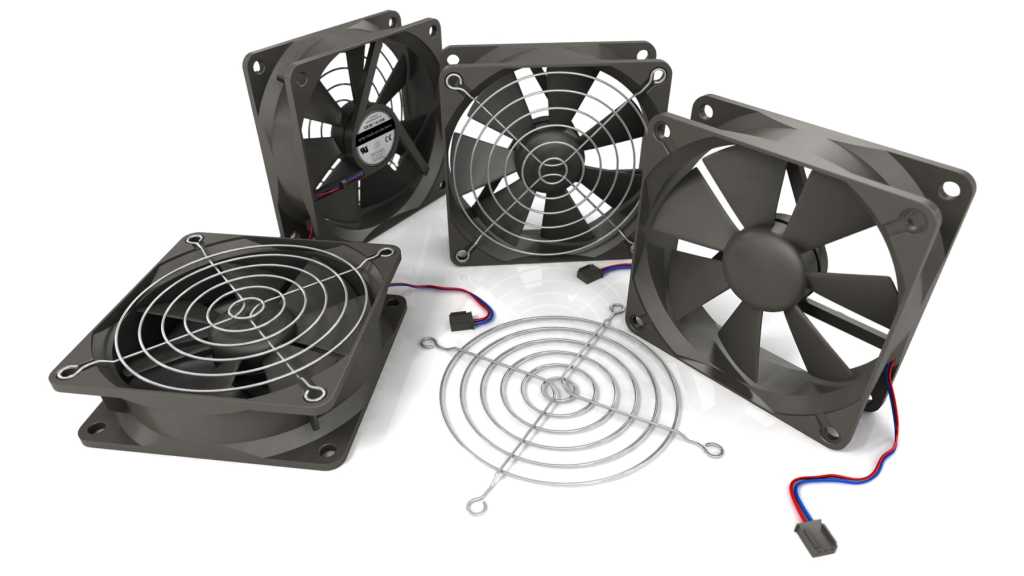 Your PC probably has a few fans inside it. There’s usually one to cool the CPU, one or more for the graphics card and between one and four attached to the case itself.

They’re required to keep the electronics cool, but they shouldn’t be overly noisy. In fact, unless you’re running any demanding apps – such as games or video editing, it should be possible to run the fans so slowly they’re almost inaudible.

Any fans connected to your PC’s motherboard are controllable according to temperature, but those connected directly to the PC’s power supply may run only at once fixed speed.

So the method for controlling them will depend upon how they’re powered. So you’ll have to take the side panels off your PC to have a look. When you do this, it’s a good idea to turn off the switch on the power supply (or at the wall) but leave the wire connected so the PC has a ground connection – you don’t want to damage anything with static electricity. 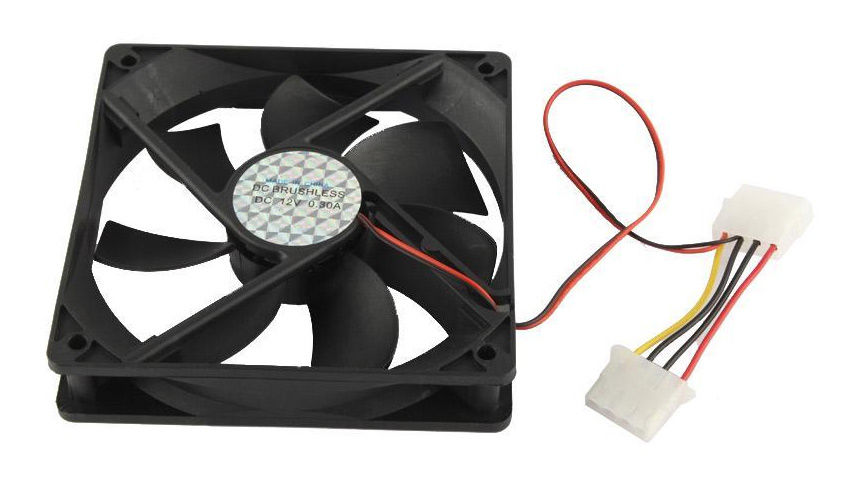 Above is a fan that connects to a power supply using a four-pin Molex plug. Sometimes, such fans have a second cable emerging from their main body with a switch for adjusting speed, but if this is is not present, the only way to adjust its speed is to buy a fan controller which has corresponding Molex sockets.

For fans with smaller three- or four-pin connectors which attach to the motherboard, these can be controlled by software, or in the BIOS.

How to identify which fan is noisy

Remove the left-hand side panel from your PC case (left when looking at it from the front). Power it on and have a listen. You might be able to work out if there’s one particularly noisy fan just by listening. However, if you’re careful you can gently press the centre of most fans on CPUs and graphics cards to slow them down – even stop them spinning. Don’t jam a pen in the blades: it could cause some fins to snap off.

Stopping each fan in turn will give you an audible indication of how much that fan is contributing to the overall noise.

It might be that there are lots of fans all making lots of noise, in which case you can follow the process below to use software to make them spin more slowly. Or, if you cannot control them as they use Molex plugs, you may want to buy a quieter, replacement fan which can be controlled by your motherboard. 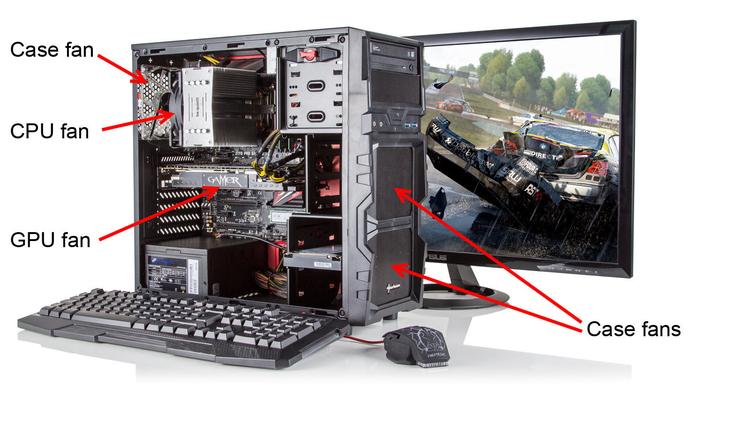 How to make your PC fans quieter

It’s all well and good fiddling with the inner settings of a PC, but sometimes a little housekeeping could solve your problems instead.

Dust is a major problem with PCs, as they attract it like no one’s business. A build-up of the material in or around the fan ports can make it harder for hot air to escape, and thus make the fans worker even harder.

If you can, open the case of your PC and do a little spring clean. You can use a vacuum cleaner to remove dust, just ensure that the plastic nozzle is fitted to the end and that you’re very careful not to touch any of the components. A can of compressed air is another option here.

It’s also a good idea to make sure that air can pass freely around your PC. So, if it’s stuck between boxes under your desk, buried amidst a pile of papers, or just in a poorly ventilated area, then you’re going to hear the whirring of those fans more often than might be necessary.

Change fan speed in the BIOS

When you first turn on your PC it will run through various checks and settings before you can use it. These are contained in something called the BIOS (Basic Input/Output System), which you can access and change.

To do this you’ll first need to turn off your PC, then power it on again. Look for a message that will appear very quickly saying something along the lines of ‘Press XX to enter setup’, where XX will probably be Delete or F2, F10 or another key.

If you miss it, and it does go by very fast, then just reboot your machine and try again. Eventually you’ll time it right and be presented with the Startup menu page. 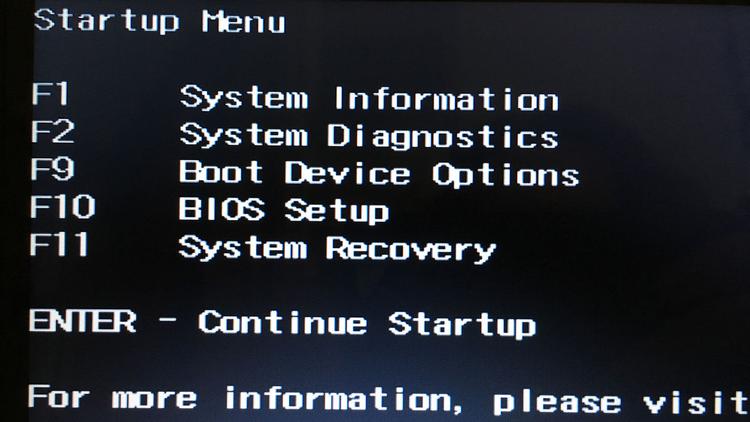 Here you should find an option called BIOS Setup, or something similar. Each manufacturer has its own BIOS, so the precise names vary from machine to machine.

You’ll now be presented with a page of information about your PC. Look for a System Configuration option, navigate to it (usually using the cursor keys), and then look for a setting related to your fan.

On our test machine this was an option called ‘Fan Always On’ which was enabled. 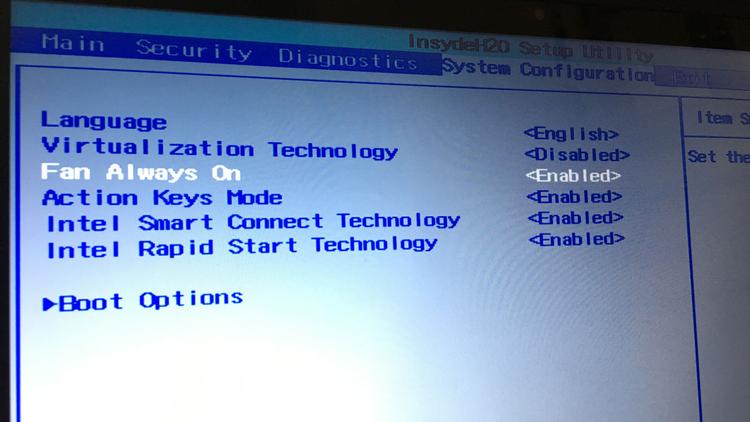 Most PCs will give you the option to set temperature thresholds when you want the fan to kick in. Be sure to set these sensibly, as letting your PC run too hot for too long could do serious damage to your machine.

When you’re finished, press F10 to Save & Exit, then your PC should reboot with the new adjustments a permanent fixture.

Although we’re talking about PCs mainly, you can use software to control fans on laptops as well as PCs. In fact, on many laptops the only option in the BIOS is to disable the fans entirely, which is a very bad idea. If your PC has similarly paltry settings then you’ll want to seek out some third-party software to help.

The most popular is SpeedFan, which has been around in various iterations since 2000. 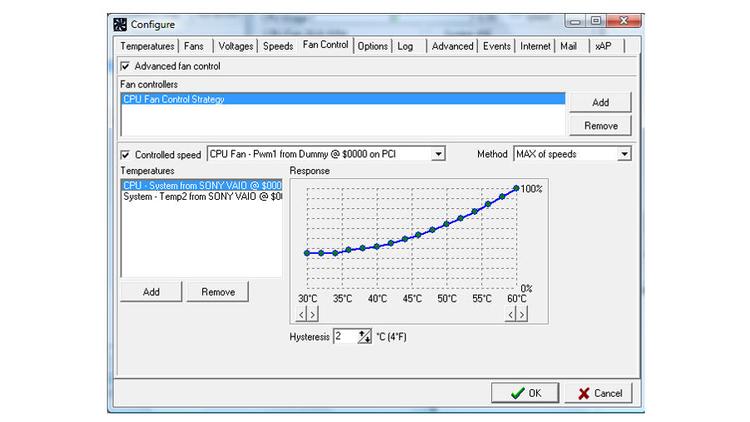 This free app gives you an impressive amount of control over your fans which are connected to the motherboard, allowing you to choose how fast they spin at various temperatures. When you’ve installed it, launch it and click on the Fan Control tab. Here you can see a list of the motherboard’s fan controllers, with a drop-down list near the middle where you can choose each fan individually.

While SpeedFan covers a wide range of motherboards, there are still some that are beyond even its impressive reach. In this case, you might consider buying a fan controller. These typically fit into a spare 5.25in bay on the front of your PC and you connect a certain number of fans to it.

They allow you to adjust individual fan speeds via knobs or other controls, but the disadvantage is that most controllers like this are purely manual and do not auto-adjust speeds based on temperature. That means that your PC can overheat if you forget to turn up the fans before playing, say, a game.

However, Thermaltake’s Commander FT has both manual and automatic modes, and isn’t too expensive from Amazon.

Read about fan controllers and other ways to lessen the din from your machine in our guide to  making your PC quieter.

There you have it. A few quick ways to try and get your fans under control. Hopefully now you can enjoy your digital adventures without the roar of spinning motors in the background. Ah, such sweet serenity.

Of course if you want to use your noisy PC as an excuse to move to a new, super-quiet, fanless laptop, then you’ll find lots of tempting choices in our best laptops guide.