Anthem is the latest new IP from EA studio BioWare, best known for the Mass Effect and Dragon Age games. Previously known only by the codename Dylan, Anthem departs from what BioWare is known best for, instead moving towards a cooperative action looter/shooter in the vein of Destiny or The Division.

First unveiled at E3 2017 and with more details emerging all the time, we’re starting to piece together more information about BioWare’s next big title.

Here’s what we do know, including the release date, platforms, early access information and gameplay and story details. For more information, check out our Anthem hands-on review from E3 2018.

When is the Anthem release date?

“It’s not a delay,”  EA CFO Blake Jorgensen  told The Wall Street Journal. “People are trying to create a story.” Instead, EA felt that moving Anthem’s release date into the first quarter of 2019 would provide the new IP with an open release window, rather than putting it up against established brands in the run-up to Christmas.

Anthem is coming to PS4, Xbox One and PC, and will take full advantage of the 4K-enabled  PS4 Pro and Xbox One X.

Can I play Anthem early?

The good news is that if you’re keen, you’ll be able to play Anthem earlier than everybody else.

The Anthem VIP demo will be available to EA/Origin Access subscribers and those that pre-order the game from 1 February 2019.

If that’s not enough, you’ll be able to access the full game from 15 February 2019, though that is exclusive to EA/Origin Access. The standard subscription will allow you to play 10 hours of the game before release on 22 February, while Origin Access Premier subscribers will have unlimited access. 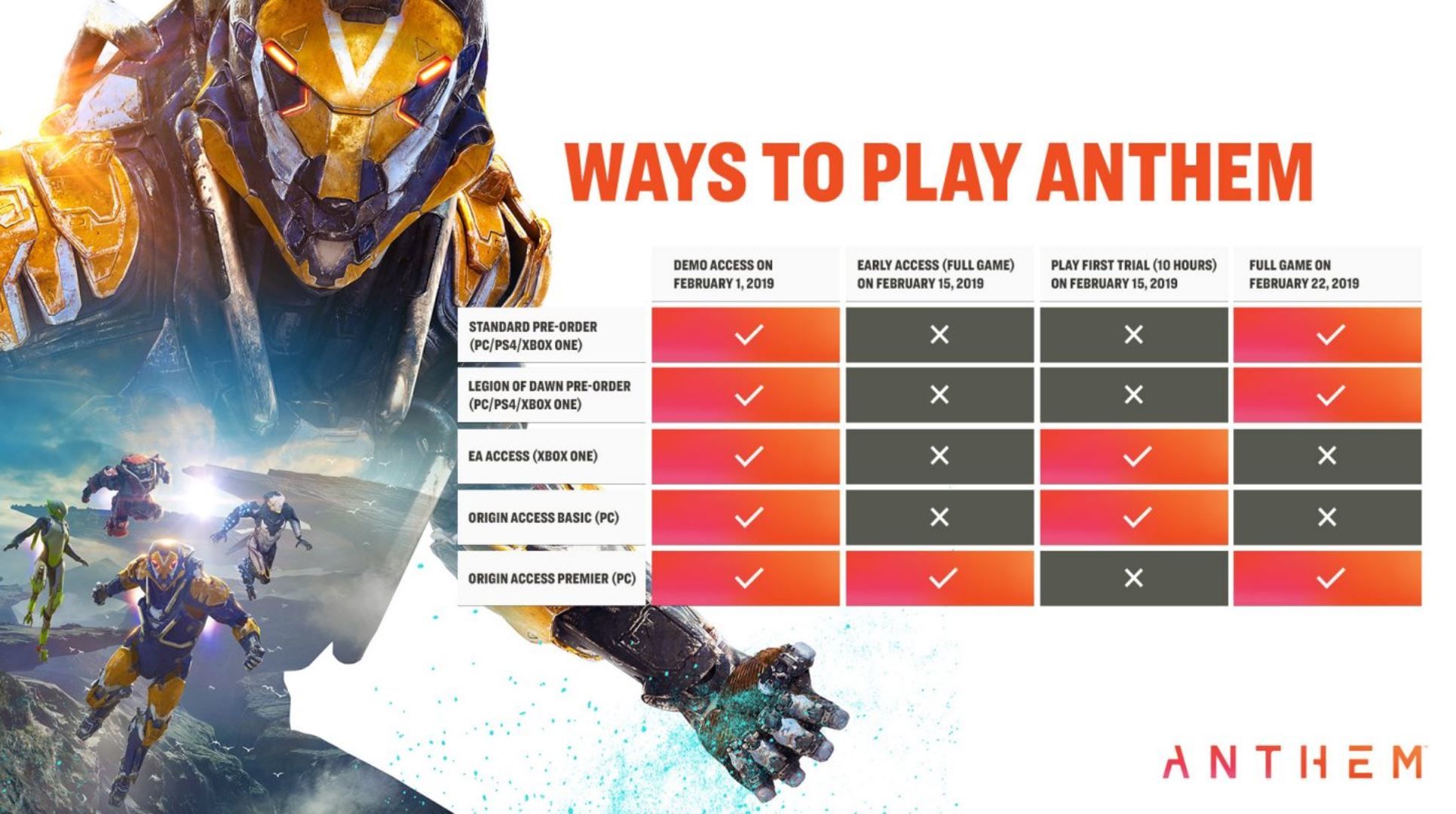 So, if you want to see what Anthem has to offer before everybody else, you better get subscribing/pre-ordering!

EA describes Anthem as a ‘shared-world action-RPG’, which in practice means it’s a bit like Destiny or The Division, a sort of massively multiplayer online shooter.

You play as a Freelancer, tasked with braving the wilderness around a walled city (so far, so Destiny) to protect mankind from the threats that lie beyond. They include huge, savage beasts, and at least some armed enemies called Scars.

To help you survive, you don a Javelin exosuit. These allow you to fly, and are also packed with weapons and abilities. You’ll be able to accrue multiple Javelin suits for different situations, and can customise both their loadout and their look.

You’ll be able to team up in groups of up to four to complete missions together, though we expect you’ll also be able to play most of the game on your own if you prefer.

You will progress through the game and your character will level up as you do so, gaining more loot and abilities. If we haven’t made this clear already, they’re borrowing fairly heavily from The Division and arm-dislocatingly heavily from Destiny.

You can watch some of that for yourself in the 20-minute gameplay demo shown off at E3 2018, which EA has since uploaded in video form with commentary from Lead Producer Ben Irving:

More recently, Anthem devs took to Twitch to showcase the game’s town hub, Tarsis. Much like Destiny’s Tower, it Tarsis appears to be where you’ll hand in loot, upgrade gear and even talk to the NPCs. It is a BioWare game, after all!

The stream features a few technical glitches, but overall, the hub looks colourful and a[ppealing. It’s good to see the devs talking about more than the flying and shooting (of which there will be plenty, don’t worry!).

Then, at The Game Awards 2018, EA showcased a trailer that gives us a better understanding of the world that Anthem is set in, as well as a quick glimpse at the breadth of enemies you’ll be going up against. Most importantly, it seems to show that BioWare has got past the horrible facial animations present in the last Mass Effect game, with some pretty natural-looking characters present.

Will Anthem have loot boxes and microtransactions?

EA was very quick to state that there will be no loot boxes or pay-for-power advantages in Anthem. We remember a time when that didn’t have to be stated as if it’s a feature that demands applause but here we are in a post-EA Battlefront 2 world.

You will be able to buy cosmetics to make your Javelin mech look different, through colours and geometric shapes, but you will know exactly what you’re getting and it won’t give you an advantage.