Announced at Computex 2017, Nvidia’s new Max-Q range of GeForce GTX 10-series chips is coming to a gaming laptop near you. We explain why you should care about Max-Q.

And you can also read our hands-on reviews of the Asus RoG Zephyrus which has a GTX 1080 Max-Q. We’ve also seen the Acer Predator Triton 700 but Max-Q hasn’t been announced at the time. Also check out the  MSI GS63VR Stealth Pro.

So what is Max-Q?

It’s actually an aerospace term which relates to the aerodynamics of a rocket or missile, specifically the maximum stress the design can cope with. However, in the context of graphics cards, Nvidia is using the term to mean maximum efficiency.

The actual GTX 1080, 1070 and 1060 chips are the same, but they’re cherry-picked from the production line and then designated as Max Q versions. In Device Manger, you’ll see Nvidia GeForce GTX 1080 with Max Q technology.

What it means is that these particular GPUs are more efficient and draw less power than their ‘Max P’ counterparts, that is those chips which deliver the full performance, but also draw more power.

When are Max-Q laptops coming out?

Laptops from Asus, MSI, Acer and many more will go on sale from 27 June.

Nvidia has given laptop makers a set of requirements which they have to fulfil order to get their Max-Q badge. One is that fan noise mustn’t exceed 40dB.

And while it isn’t a requirement, some laptops are just 18mm thick.

Compared to older gaming laptops which typically weighed well over 3kg, those with Max-Q GPUs will weigh around 5lbs (just over 2kg).

So any laptop with the Max-Q sticker will be relatively lightweight and quiet-running, two facets that gaming laptops have tended to lack up to this point.

Because of the lower power draw, Max-Q graphics chips generate less heat, which in turn means fans don’t have to move so much air, which is why they can be quieter even when you’re playing Overwatch at 60fps.

And since they do use less power, your battery will last longer. Or, you can get away with a smaller battery, which makes you laptop lighter.

However, it isn’t simply electrical efficiency at play here. Laptop makers have worked closely with Nvidia to develop better cooling solutions, such as nifty hinge on the Asus Zephyrus that opens up a full-width vent when you raise the lid.

Max-Q chips are around 5 percent slower than their ‘Max P’ counterparts. Nvidia says that squeezing that last few percent out of a GPU requires loads more power, as illustrated by this handy graph: 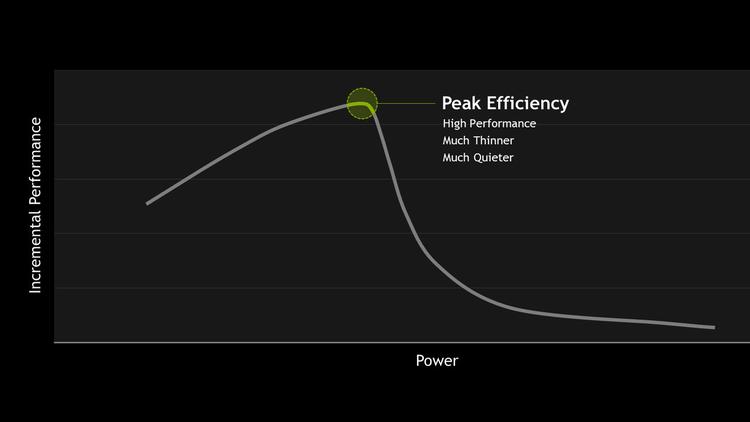 For some gamers that performance counts, but if you’re playing on a smaller laptop screen, you can get away with decreasing some image quality settings without really noticing the difference.

Nvidia has also used its software prowess to automatically make some of these ‘efficiencies’ in games so you can enable a new WhisperMode that trades off a little graphical quality (but not frame rate) to lower fan noise to just 32dB.

And as the Decibel scale is logarithmic, that’s a much bigger difference than you might expect. A quiet room has a background noise of between 25-30dB, so it means you can play a game on a Max-Q equipped laptop and not disturb those around you.

We’ll bring you reviews of the new laptops shortly.