Nvidia started off Gamescom 2018 with a bang by officially announcing the RTX 2070, RTX 2080 and the RTX 2080 Ti based on the long-rumoured Turing architecture.

Following the Ray Trace demo a few months ago on a monstrous $64,000 rig that featured 4x Nvidia Volta cards, we were able to get a glimpse into the future of CGI and gaming with dynamic reflections and lighting that help make virtual worlds feel that much more realistic.

The same demo was run on a single Turing card which helped to highlight the leap forward in technology that Nvidia has been developing in parallel for 10 years.

The 2070 doesn’t have a pre-order date at the moment. This is the card that will catch the eye of most consumers as it promises a massive performance jump despite being the baby of the new range, at a reasonable price considering the current state of the graphics card market.

The prices for the cards announced at the event were as follows.

On Nvidia’s UK website you will be able to find Founders Editions of the 20 series for the following prices.

Various third-party versions of these cards can also be found on the Overclockers website.

The US pricing for the Founder’s Editions of the new cards according to Nvidia’s website:

Should you pre-order a card? We explain why you should wait.

The performance gap between this new Turing generation and the older Pascal architecture is being advertised as nothing short of revolutionary.

The cards are based on the brand new platform which promises up to 6x the performance of the previous generatios, although that’s talking specifically about real-time ray tracing – the technology that has had the industry buzzing since Nvidia demonstrated it several months ago.

The new GPUs are equipped with Tensor Cores that can provide over 100 TFLOPs of AI computing power,allowing the GPUs to create and run algorithms to make graphics sharper and more defined.

The first round of benchmarks are starting to appear for the RTX 2080, although it must be said that they should be taken with a pinch of salt

A gentleman from Thailand by the name of Tum Apisak has reported some 3DMark Time Spy results on his twitter account.

This shows the RTX 2080 outpacing the 1080 Ti by 5%, and the 1080 by 35%. However, the core clock on the ‘Generic VGA’ card (which we can assume is the 2080) seems a little high at 2025MHz when the factory stock is advertised at 1800MHz. We will see how reliable these figures are pretty soon as more benchmark results will be flooding out over the next few weeks.

Nvidia has just released some internal benchmark results – probably to address concerns over the new cards’ performance in non-ray traced games. The graph below compares the RTX 2080 to the GTX 1080, but note that the bright green bars are the extra performance when DLSS is enabled in games. And not many games yet support this new technique. (It stands for deep learning super-sampling and is basically an alternative way to do anti-aliasing to smooth out jagged lines). 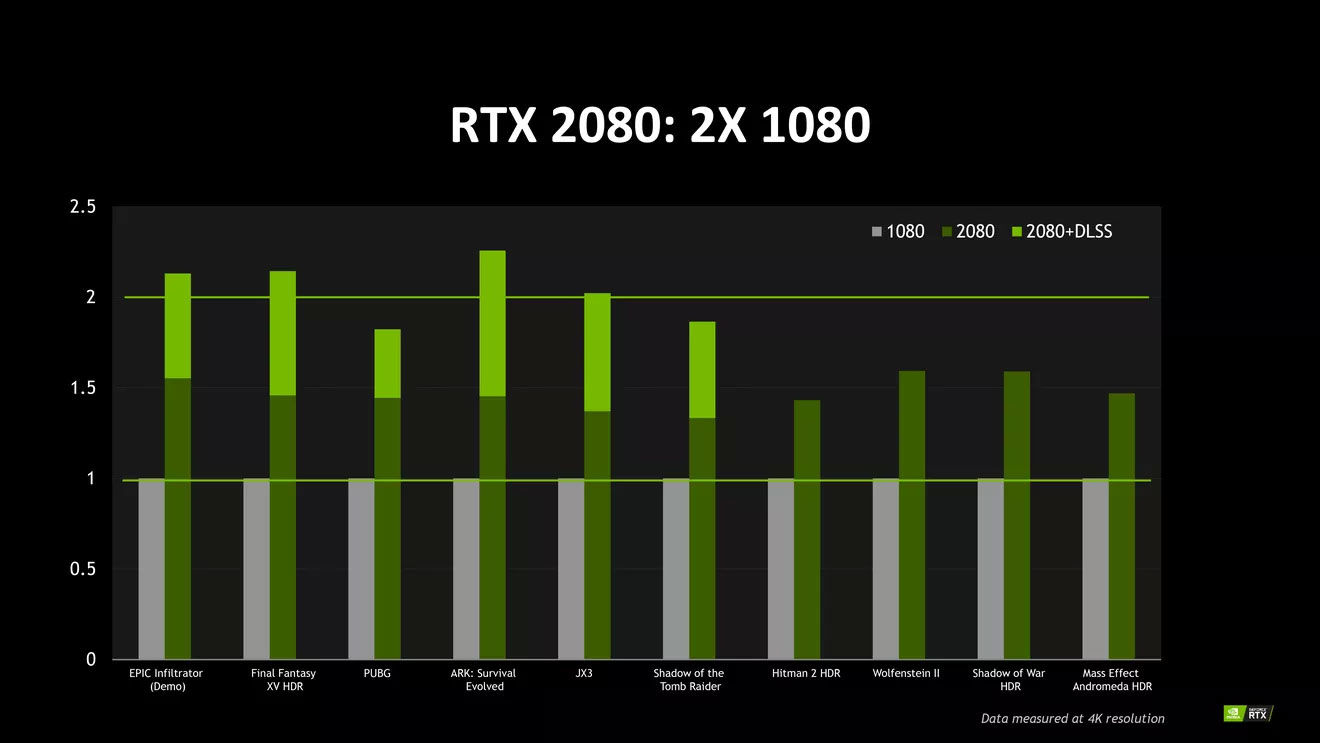 So, what can you take away from this? Well, four of the games here were run in HDR mode, and there’s no detail on which quality settings were used. However, it is possible to see that the RTX 2080 offers a fair chunk of extra performance even in current games, without ray tracing, DLSS or HDR.

The average performance gain appears to be 30-50 percent, and Nvidia says that all the new RTX cards will handle modern games in 4K at 60fps. But we’ll still have to wait and see how they perform in our own tests to know for sure.