Microsoft took to the stage at its MicrosoftEdu event on 2 May to announce Windows 10 S, a version of Windows 10 that is aimed at students and will be available on ultra-low-cost laptops. Except it’s also available on high-end notebooks, including the stunning new Surface Laptop with which Microsoft surprised its audience. Read our Surface Laptop review.

A sort-of Chromebook competitor but with a gorgeous design and more expensive asking price, the touchscreen Surface Laptop wants to be the laptop favoured by students everywhere in the next school year. Microsoft says its Surface Laptop will last them from the beginning of their studies to their graduation day and beyond.

With Windows 10 S onboard, which prevents the installation of apps outside the Windows Store, this is the most secure Windows laptop you’ll ever cast your eyes upon. Which makes it ideal for students – and the rest of us.

We’ve outlined the answers to all the questions you’re likely to have on the new Microsoft Surface Laptop below, and also provide some of our first impressions.

Could there be a second-generation version in 2018? We take a look at the Surface Laptop 2 rumours.

When is the Surface Laptop release date?

The Surface Laptop goes on sale on 15 June 2017, but Microsoft is letting you pre-order it direct from its website today. You can compare the full Microsoft Surface range here.

How much will the Surface Laptop cost in the UK?

It might be aimed at students, but the Surface Laptop is not particularly cheap. At a minimum you’ll pay £979, whereas even the best Chromebooks cost under £300.

We’ve outlined UK and US pricing for the new Microsoft Surface Laptop in the table below.

The entry-level model includes a Core i5 processor, 4GB of RAM and a 128GB SSD. The latter is a PCIe version that’s soldered on to the motherboard, but you can have up to 1TB if you’re prepared to spend more.

Until 31 December 2017 switching to Windows 10 Pro is a free upgrade (this will allow you to install apps outside the Windows Store).

The Surface Laptop, then, is a premium device that’s more akin to the Chromebook Pixel. Google discontinued the Pixel a few months ago, so it might seem like a strange time to launch an expensive piece of hardware with a cut-down OS. 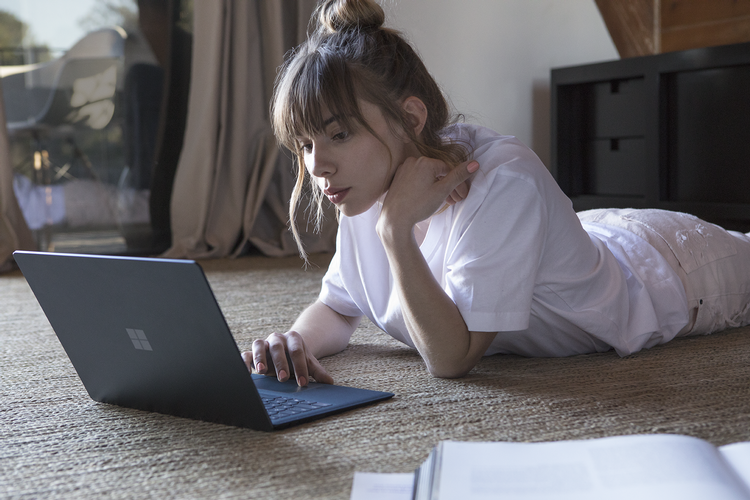 It has a 13.5in screen with the same 3:2 aspect ratio as other Surface devices. Its 3.4million pixel resolution should prove more than adequate, and it also gets factory colour calibrated so you see accurate tones.

At 3.5mm thick, this is claimed to be the thinnest touchscreen on any laptop.

As a whole, it measures 14.5mm at the thickest point, with the front edge being just under 10mm. It’s pretty light at 1.25kg, too.

To enable this thinness, heat pipes are designed into the bottom part of the chassis to dissipate heat from under the processor. You get a choice between the seventh-generation Core i5 or Core i7.

Alcantara fabric is laser-cut around the keys, which have 1.5mm travel and are backlit. 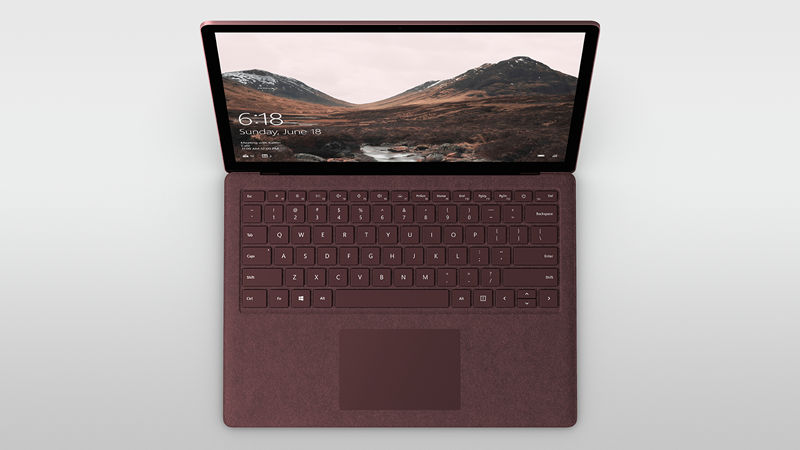 The fabric also has the benefit of acting as a speaker grille, so speakers mounted beneath the keys can be heard without being seen. At the edges the fabric is seamlessly joined with the aluminium chassis.

Around the edges you get a USB 3 port, a mini DisplayPort output, a headphone jack and an SD card reader. The integrated battery is said to last up to 14.5 hours between charges.

Naturally, the current range of Surface accessories work with the new laptop, including the Surface Pen and Dial. You can also use it with the Surface docking station.

There are four colour options for the Surface Laptop, comprising Platinum, Graphite Gold, Cobalt Blue and Burgundy, but only for the entry-level Core i5 model. The other three models are currently available only in Platinum. 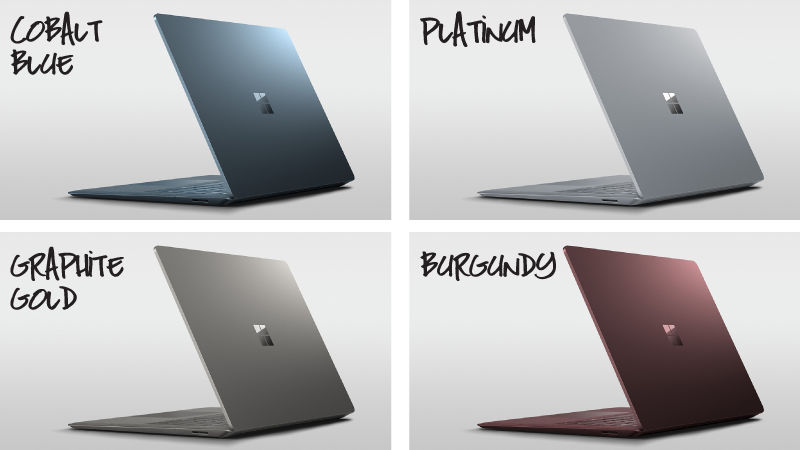 What are the Surface Laptop specifications?

First impressions of the Surface Laptop

Our colleagues over at US-based PC World were able to get a hands-on with the Surface Laptop during the MicrosoftEdu event.

“Two things will immediately strike you about the new Surface Laptop: It’s amazingly light and sturdy, and it borrows a lot of its look and feel from Surface Pro 4,” writes PC World Senior Editor Mark Hachman.

“Think of the Surface Laptop as Microsoft’s answer to the MacBook Air: pricey, thin, and with battery life that goes on and on and on. It’s not a Chromebook competitor, but a far more premium experience,” he continued.

But while the reaction was mostly positive, the price is going to be an issue.

“So far, Microsoft hasn’t announced a cheaper Core m version of the Surface Laptop; I suspect that will arrive at some point to entice the student crowd who live off day-old pizza and beer, and not their parents’ credit card. Still, the Surface Laptop feels great in the hand, seems quick and responsive, and offers the Surface an important entry into the mainstream market,” wrote Hachman.