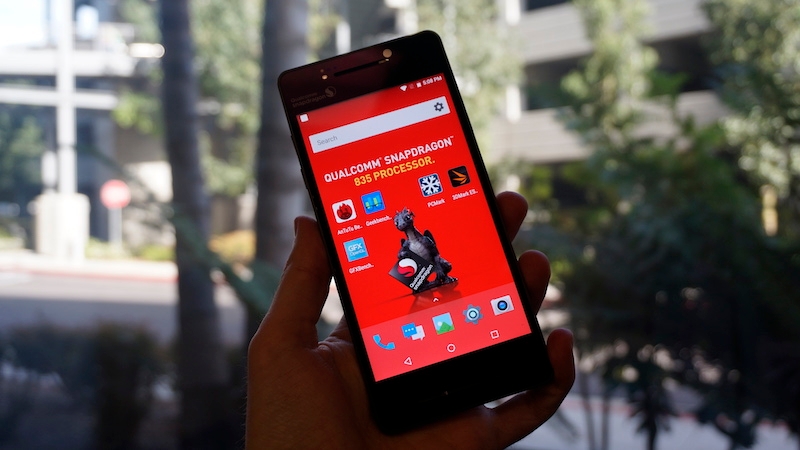 Qualcomm’s new flagship processor for 2017, the Snapdragon 835, is coming soon in phones like the Sony Xperia XZ Premium and Samsung Galaxy S8. But what kind of performance gains can you expect? We’ll here’s our Qualcomm Snapdragon 835 benchmark results compared to rivals. Also see: Windows 10 is coming to Snapdragon 835.

When it comes to benchmarking, we were able to test a reference design smartphone at Qualcomm’s headquarters in San Diego. That means it’s not a device you can buy but gives you an idea of what to expect from smartphones and other products that will use the chip. See also: Best phone 2017.

The device we used had, of course, a Snapdragon 835 inside along with 6GB of RAM, a Quad HD resolution screen and Android 7.1.1 Nougat. We’re still not seeing loads of smartphones with 6GB of memory but the reference device is a good representation of a 2017 flagship.

We’ve run plenty of Snapdragon 835 benchmarks but we weren’t able to test battery life, which is one of the key improvements over previous generations – a 50 percent power reduction since the Snapdragon 801 which is largely down to the 10nm manufacturing process. That said it’s a reference design anyway so look out for battery tests on phones you’ll be able to buy.

Qualcomm is also keen to point out that these kinds of synthetic tests are unable to assess various areas of the Snapdragon 835 such as connectivity, photography, VR, audio, security and charging. We’re predominantly testing the Kryo 280 CPU (octa-core 2.4GHz and 1.9GHz) and Adreno 540 GPU. Also see our Galaxy S8 review and Galaxy S8 Plus review

As a side note, Qualcomm now calls its chips ‘Mobile Platform’ instead of ‘Processor’ (apart from the 200 series) as it felt the word didn’t give its products enough credit. The firm told us in San Diego it’s a combination of hardware, software and services, not just a processor of SoC (system on a chip).

We could compare the Snapdragon 835 with a plethora of devices but we’re going to stick to three here. The new LG G6 which has the Snapdragon 821, the Samsung Galaxy S7 running the Exynos 8890 and the iPhone 7 with Apple’s A10.

Geekbench is a benchmark mainly testing the raw power of the CPU. There’s much more to the Snapdragon 835 but here we’re looking at the Kryo 280 CPU and a higher score is better.

As you can see from the graph, the Snapdragon 835 outperforms the key rivals by a reasonable margin. We can also see that the 835 shows a decent jump when compared to the 821 (the LG G6). It’s almost exactly a 50 percent jump in the score which is impressive.

Moving onto the popular Antutu benchmark, which is a bit different to Geekbench 4. This test ‘all aspects’ of a device according to the maker so looks at the UX, GPU, RAM, CPU, I/O and more. The score you see below is an overall result combining the different areas.

Once again the Snapdragon 835 comes out on top, but not by as big a margin since the iPhone 7 was able to produce an impressive number. Compared to the Galaxy S7 there’s a large jump and the improvement over the 821 is around 35 percent. Not bad at all.

If you’re into your mobile gaming then pay attention to the results of GFXBench which runs through increasingly intensive graphics loops in order to test the GPU, in this case the Adreno 540 – not a new generation for the 835 but an improvement over the previous 530.

This isn’t an area where Qualcomm is shouting about the boost in performance but the Snapdragon 835 still put out some impressive numbers. We test on-screen for real-life devices which makes this a little skewed as you won’t be able to buy the reference model we tested.

The Quad HD resolution of said device (matching the G6 and S7) has a large impact on the results which is why the lower resolution iPhone has such high figures. For reference then, the 835 managed off-screen frame rates of up to 116fps if that bothers you but we don’t have figures to compare to at the moment.

There’s no beating the iPhone in GFXBench but there are significant gains when compared to the LG G6 and Galaxy S7. In fact, the hardest benchmark here (Car Chase) shows a jump of over 50 percent. Note that the iPhone was unable to run Car Chase.

In a similar way to Antutu, PCMark for Android (not available for iOS hence no iPhone score) tests the overall performance of a device giving a numerical score. Work 2.0 tests things like web browsing, video editing, photo editing and working with documents and data.

Once again, the Snapdragon 835 comes out on top with an impressive score – the highest we’ve seen. As you can see, it’s almost double the score of the Galaxy S7 and a decent jump from the 812-powered LG G6.