Call of Duty: Infinite Warfare had soldiers in space, but according to Activision, it didn’t resonate well with players. Call of Duty: WWII takes the series back to its roots with gritty, intense gunplay and a completely rethought multiplayer experience.

Oddly enough, Activision has also announced the first DLC – the battle of Carentan – which will be out 30 January 2018. It’ll be on PS4, and no dates have been announced for Xbox/Windows releases.

What platforms is Call of Duty WW2 available on?

As with all recent Call of Duty games, Call of Duty WW2 is available on PC, PS4 and Xbox One, with Sony’s console boasting exclusive CoD content.

As expected prior to the initial announcement, the  Nintendo Switch isn’t supported, though there are rumours of a lower spec port. Beenox, a developer who’s been responsible for Call of Duty ports to Nintendo platforms in the past, has allegedly  confirmed it is working on something to do with the franchise, but wouldn’t confirm what.

Call of Duty WW2 is available to buy on PS4, Xbox One and PC in both digital and physical forms. Those that want to buy a digital copy of Call of Duty WW2 can head over to the PlayStation Store (£55), Microsoft Store (£55) and Steam (£45).

Those that want a physical copy of Call of Duty WW2 have more options available. The game’s available via Amazon (£48) with its price check guarantee, along with the likes of GAME (£49) and Zavvi (£50). 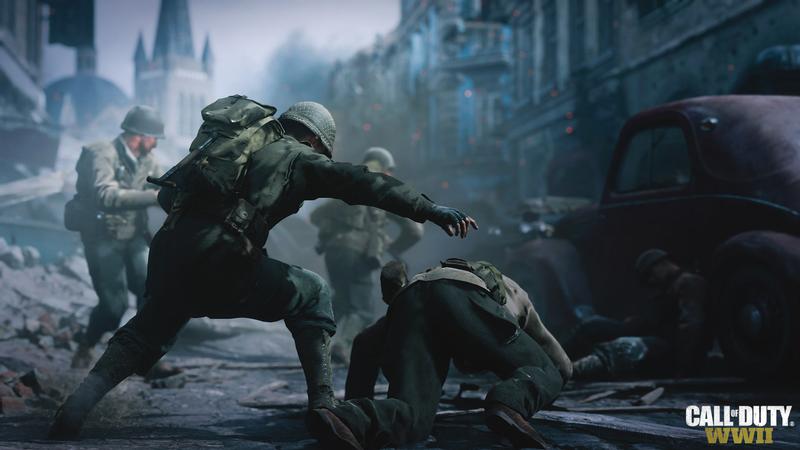 What can I expect from Call of Duty WW2?

The game, rather obviously, is set during World War 2 and will see gamers on the beach in Normandy on D-Day before battling across Europe in a series of iconic locations from the war.

Watch the multiplayer gameplay demo from E3 2017 below:

The first DLC – Carentan – looks stunning and should take players back to the brilliant multiplayer map from CoD 2. Of course, more than a decade on things look a lot more photo-realistic and the new trailer (below) gives a good sense of what to expect. It doesn’t say whether there are both multiplayer and single-player modes though.

Call of Duty WW2 follows the story of the US 1st Infantry Division as they battle their way across Europe. There will be battles in iconic locations including the D-Day invasion of Normandy as well as the Battle of the Bulge, and we expect more locations to be revealed at E3 2017.

Unlike with the hugely popular Battlefield 1, which put you in the shoes of several protagonists, Call of Duty WW2 will focus primarily on the story of inexperienced Private Daniels, although there is a mission where you’ll take on the role of a woman fighting in the French resistance.

Activision has also confirmed that Transformers actor Josh Duhamel will make an appearance in the single-player campaign as 34-year-old Technical Sergeant William Pierson.

Much like with Infinite Warfare, we imagine a slew of famous faces will make appearances in the game, and we expect more to be announced in the run-up to the game’s November 2017 release.

In an interview with Edge, the devs also revealed that they visited the sites of former battles across Europe to help capture the feel and look of the settings, including a visit to the frozen Hürtgen Forest – so we know there’ll be at least some fights in frosty conditions.

That commitment to accuracy extended to the tech too. The devs said that they learned that tank commanders would modify their tanks by fortifying the side or the front to suit their preferred tactics, suggesting that might be a feature in the game, and that they analysed technical data to understand the weak points in tank treads.

You can now watch the awesome trailer for the campaign story mode for CoD WW2.

First up, classes are gone. Don’t worry though, as they’ve been replaced with Divisions that include Infantry, Armoured and Airborne, suggesting that vehicles may finally be coming to the series.

We also know there’ll be at least one major shakeup to the established CoD formula: no more infinite sprint.

Michael Condrey, one of the game’s lead devs, confirmed the news on Twitter. It’s not too much of a surprise, given the shift to a more realistic tone and the WW2 setting, but it’s yet another sign that this Call of Duty is going to be a little bit different.

That won’t be the only change to the gameplay style. In the above Edge interview, Condrey emphasised that the team are trying to make it feel “strategic and appropriate to the time period, while still maintaining the fun of multiplayer,” and claimed that the game is “more grounded, and more strategic, and I think you’ll find it’s not as fast.”

That will affect the map design, because “the feeling of being able to identify your lanes and threats is so different when you’re grounded.” The multiplayer maps will also follow many of the battlefields from the singleplayer campaign, while also expanding to new battlefronts.

Following leaks from the PC beta, Condrey has revealed to Charlie Intel a first look at the new London multiplayer map: 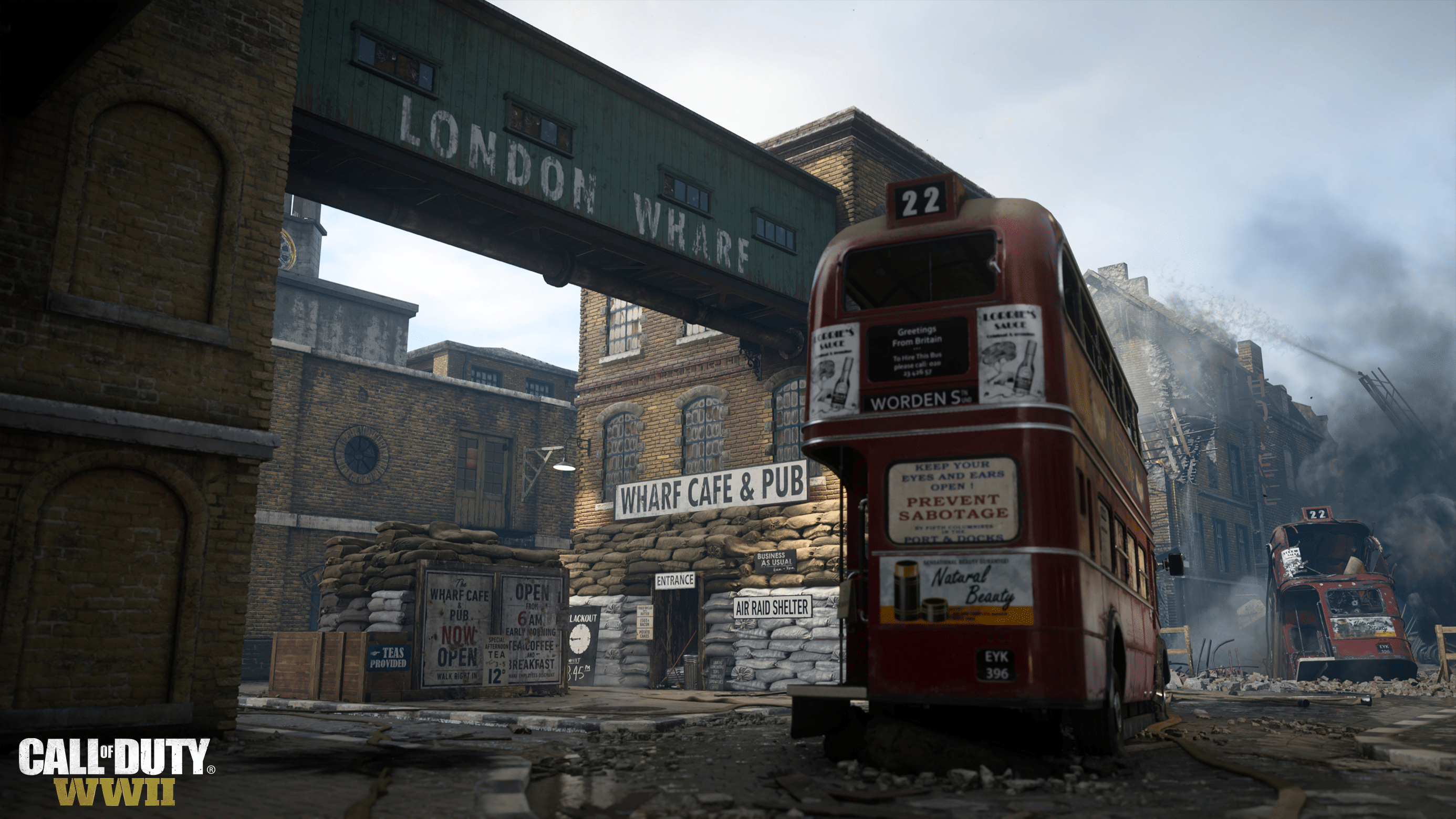 He also revealed a first look at the new Gridiron MP mode: 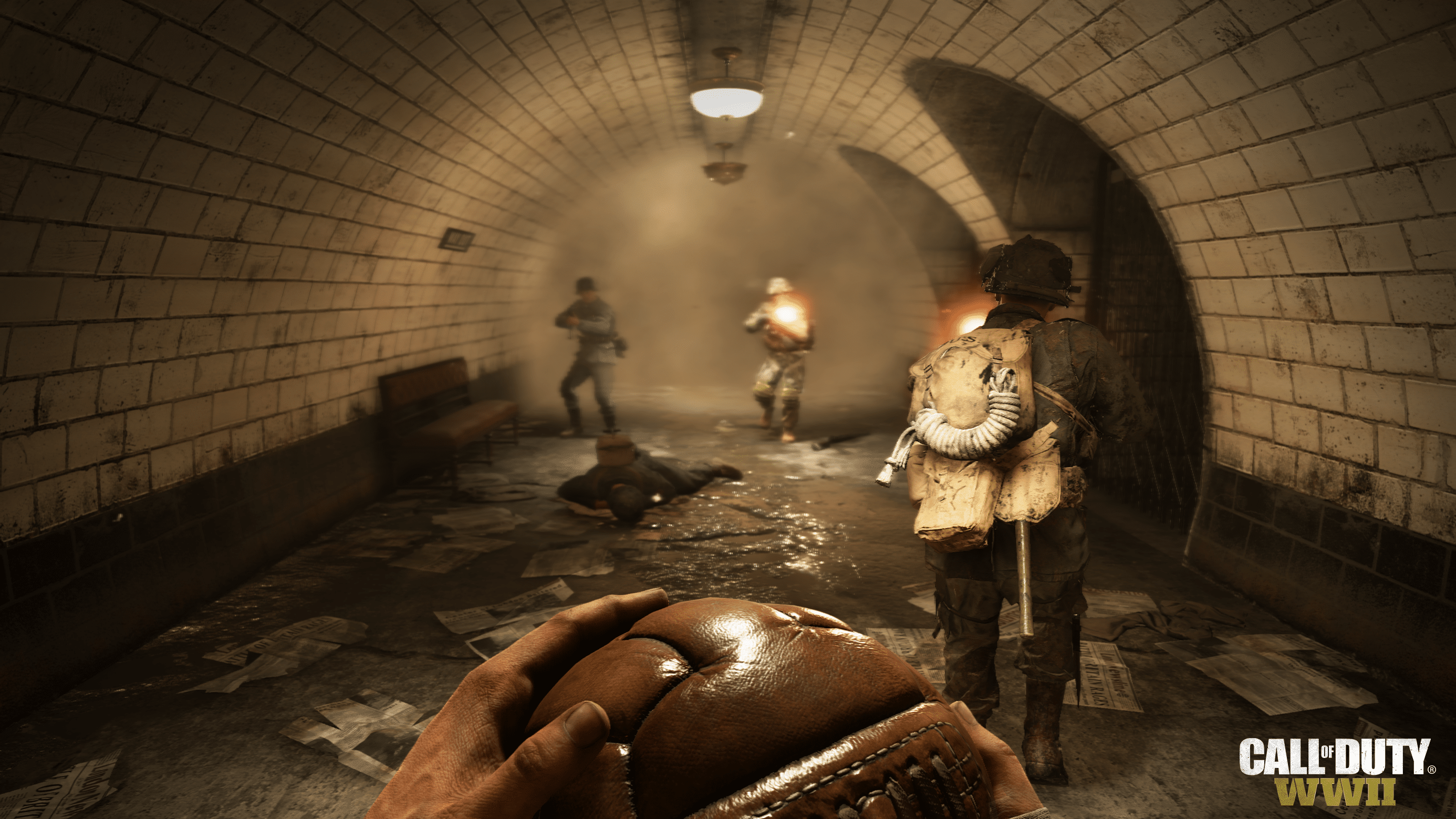 Yet another major shakeup to the formula will be the healing system. A hands-on preview from Gamer Pros claims that “there will be no auto-heal anymore, neither in single player, nor in multiplayer,” suggesting that Sledgehammer will likely introduce a support unit like a Medic instead. 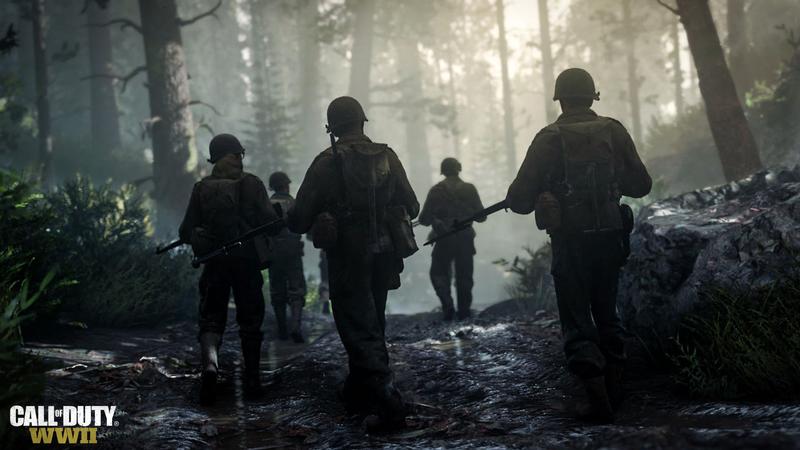 Also new is War Mode, a multiplayer mode that aims to immerse the player in iconic World War 2 battles. Featuring team-based skirmishes, players must choose between Allied and Axis and battle for objectives to push back and conquer the enemy.

It sounds much like Operations in Battlefield 1 where a story drives the objectives, and lasts much longer than a standard multiplayer match.

There’s also a new feature called Headquarters, a Destiny Tower-esque social area where players can interact with each other outside of multiplayer matches. While it’s yet to be confirmed, this could be cross-platform, meaning you might be able to see your WW2 buddies from PS4, Xbox One and PC in one single space.

Either way, it’s something new to the Call of Duty series and it’ll be interesting to see how players utilise the online space.

The new Headquarters feature is revealed in the trailer below:

Along with the campaign and multiplayer, Activision also teased a new Zombies co-op campaign mode.

It’ll feature Nazi zombies and will contain an original story separate from the single-player campaign where players must stop the Third Reich from creating an unstoppable army in the final hours of World War 2. As with everything zombie-related, all doesn’t go to plan.

In October 2017, a huge leak of details of the Nazi Zombies mode surfaced. Found in the PC files of the beta, it’s best not to look if you want the game mode to be a surprise, with no stone left unturned.

Check out the full list here if you want to know it all.

Curiously, Sledgehammer’s Glen Schofield said that the devs’ trip to Europe even inspired the Zombies mode, claiming that “There’s some really authentic stuff in there. There’s back story that’s based on real events.”

Strange as it may sound that the zombie story might be authentic, we imagine he means that it will draw on real Nazi experiments, and some of the regime’s well-documented fascination with the occult.

It also looks like it’ll push further into real horror. Condrey said that the mode will be “unique to our Dead Space signature,” a reference to the fact that many of the devs worked on the Dead Space series at Visceral. Since that’s still one of our favourite horror games, this can only be good news for Call of Duty.

As promised, the Call of Duty WW2’s Nazi Zombie mode was revealed on 20 July. Although the video was leaked ahead of the official reveal, here’s the proper trailer for you to enjoy.