There’s good news for Tolkienistas, because Warner Bros. has been working on Middle-earth: Shadow of War, a sequel to the 2014 hit Shadow of Mordor. Like that game, it’s set in the Lord of the Rings universe as inspired by Peter Jackson’s films, and will once again see you tasked with thinning the ranks of Sauron’s forces.

Shadow of War was revealed in February 2017, and following months of hype, is now officially available to buy around the world. You can take a look at our Middle-earth: Shadow of War review to find out what we think of the game.

Here is where you’ll find everything you need to know about Shadow of War’s UK pricing, platforms, and gameplay, and we’ll keep updating it as news emerges.

When is the Shadow of War release date?

Despite initially announcing that Shadow of War would be available in the UK on 25 August 2017, developer Monolith Productions announced in early June that it has pushed the release date back by 7 weeks, until 10 October 2017.

In terms of platforms, Middle Earth: Shadow of War is available on  PS4, Xbox One, and PC. The game is also part of the Play Anywhere scheme, which means if you buy a digital copy from Microsoft you can play it on either Xbox One or PC, with your save data transferring between them.

There will also be an enhanced version released with Xbox One X support, but naturally that won’t come out until the console does in November.

Shadow of War is now available to buy in the UK, and predictably it’s available in a whole slew of different versions.

Zavvi has the £54.99 Silver Edition ($79.99 from Best Buy in the US), which includes the Slaughter Tribe and Outlaw Tribe Nemesis expansions and a Silver War Chest.

The next tier up is the Gold Edition, which is £84.99 from Game in the UK, or $99.99 from Amazon US, and includes all of the above (except the War Chest is gold), along with two story expansions: The Blade of Galadriel and The Desolation of Mordor. It also comes in a nifty steelbook case. 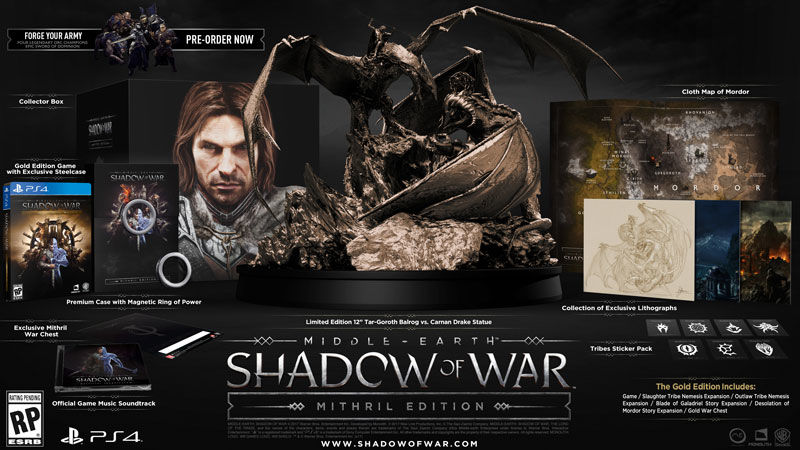 Finally, for the real die-hards there’s the Mithril Edition, which any LotR fan will know is the best of all the fictional metals.

That’s an Amazon exclusive in the UK, and a GameStop exclusive in the US and includes everything in the Gold Edition along with some physical goodies: a magnetic Ring of Power, a cloth map of Mordor, some stickers and lithographs, a soundtrack CD, and the real attraction: a 12in Tar-Goroth Balrog vs. Carnan Drake statue, which does look pretty cool, to be fair. It’ll set you back £249.99/$299.99.

Oh, and if you never played the original Shadow of Mordor, you can grab a Game of the Year copy now for £15/$20.

What is the storyline?

The first announcement trailer for Shadow of War showed off the game’s story, which picks up shortly after the end of Shadow of Mordor, between The Hobbit and The Lord of the Rings, still following Talion and Celebrimbor.

They’ve forged a new Ring of Power, and are going behind enemy lines into Mordor to try and spread dissent and undermine Sauron, turning his own army against him. It looks like that will involve fighting a Balrog, the Nazgul, and maybe even Sauron himself along the way, while building up an army and fortress.

You can see the story in more detail in the story trailer released just before E3 2017, which shows off the new ring, the core cast, and some pretty spiffy action sequences:

While the announcement trailer teased the game’s story, there was little (well, zero) gameplay on display, but luckily we went hands-on with Shadow of War at Gamescom 2017 to find out just how it runs.

Much like Shadow of Mordor, this is a third-person action title, where you’ll fight through hordes of Orcs using a mixture of melee sword combat and archery attacks, with different moves like parries and flips used for certain enemies when the prompts appear.

You can also use the ghostly power of Celebrimbor for more powerful moves, like cinematic combat executions, or to dominate your opponent by battering them repeatedly – restoring your own health in the process, though leaving you vulnerable to other enemies at the same time.

One of the biggest changes is a major expansion to the first game’s innovative Nemesis system, which saw named NPC enemies respond to and pursue the player character across the game.

For example, the mission we tried was built around luring one named Orc out in order to kill him, fighting through his fortress in the process. In fact, several named NPCs might appear rather than just one, and each will have their own procedurally generated name, design, fighting style, and even strengths and weaknesses, like a vulnerability to stealth attacks, or immunity to combat executions.

As with the first game, these enemies can advance and change as the game goes on, and you can even create more – if an Orc defeats you, it might rank up and become an even bigger threat for next time.

One of the main dynamic additions are Followers, members of your army with their own names, backgrounds, and characters. They can be loyal or betray you and become your enemies, creating varied stories along the way, while you can choose which of them to bring into battle, and which will have the most power – and thus influence – over your forces.

You can watch some early gameplay footage right here to see the new Nemesis features in action:

A second gameplay trailer made an appearance during Microsoft’s Xbox One X-focused E3 2017 press conference. The upcoming game is said to offer Xbox One X support from day one, offering enhanced graphics and resolution as showcased in the below gameplay video:

You’ll also come across monsters, from dragons to demonic dogs, on your journey, some of which seem to be tameable. Microsoft showcased some of the beasts in the game in a trailer during its Gamescom 2017 conference, which can be seen below: