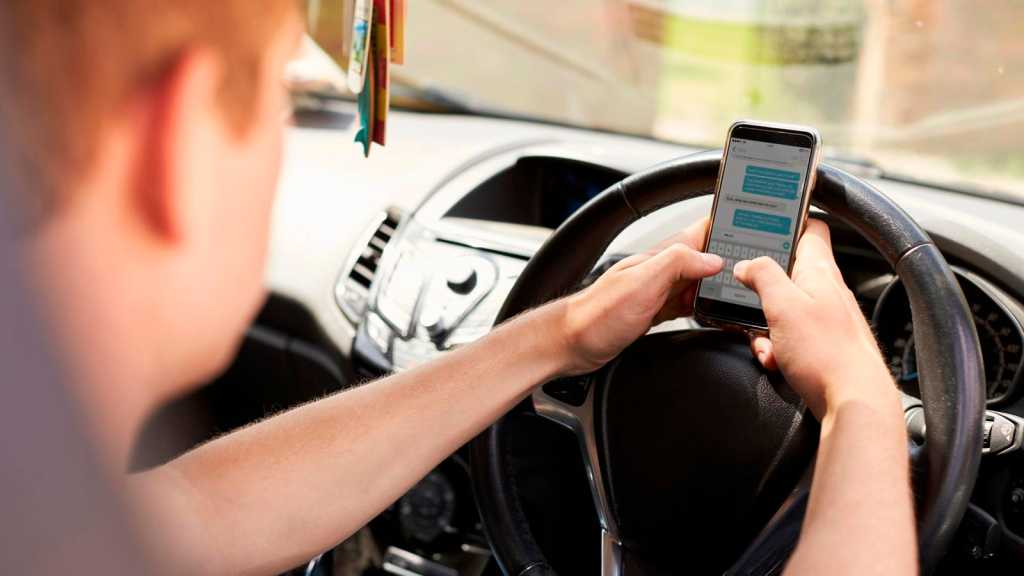 Using your phone while driving is not a good idea. Aside from the accidents it might cause there’s also the possibility of falling foul of the law.

Any driver seen holding, touching or generally interacting with a mobile device while in control of a vehicle (and that includes sitting at red lights or being stationary while stuck in traffic) could face the levy of six points on their licence and a £200 fine. Drivers who passed their test in the past two years could lose their licence altogether.

To avoid these costly mistakes we’ve put together a collection of tips and tech accessories that let you use your phone without losing your licence.

See also: Best Car Phone Mounts,  Best Dash Cams, How to buy a car, and Driverless cars in the UK

Don’t use your phone at all

Ok, it’s something of a nuclear option, but it’s the only way to be sure.

Such is the frequency with which we interact with our beloved handsets it’s entirely possible to instinctively pick up a device at some point in a journey. This will inevitably be at the precise moment that you pull alongside a police car with an unforgiving occupant, and you’ll be banged to rights with that glowing rectangle in your hand.

If you don’t trust yourself to resist the siren song of Facebook, Twitter or even your music app, put your phone in the glove box, your bag, or just somewhere you can’t reach it.

Delegate to a passenger

If you have other members of your family or friends in the car then you can hand your phone over at the start of a journey and ask them to be your surrogate. Of course there are inherent dangers of devolving power over the music selection to younger members of your entourage, but remember you retain dominion over the volume thanks to the stereo controls in the front.

If you still want to see your phone while driving, which most of us do when using it for navigation, then a cradle is the obvious choice. There are a number of different styles available, nearly all of which are designed to fit any handset. See our full round up of the best mounts and holders here.

For the best visibility you’ll want a window mounted model like the Mpow Grip Flex Universal. This has a fully adjustable arm that allows drivers to position it so that they can clearly see what’s on the display. 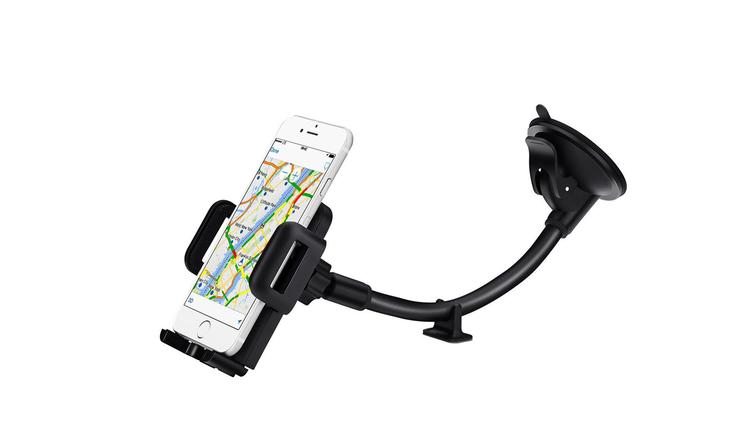 Buy the Mpow Grip Flex Universal for £8.99 on Amazon

Of course, there still remain a temptation to touch the screen, but to stay in compliance with the law you’ll have to ensure that you enter the route and start the navigation while you’re parked and the engine is turned off.

Technically you’re not meant to have anything on your windscreen as it could be deemed to impede your vision. Of course a large proportion of drivers have their phones or satnavs in front of them at all times, so the law seems to be rarely enforced. But if you want avoid being caught on a technicality you could opt for a cradle that attaches to the dashboard instead.

The EReach Car Mount Holder is a silicon mat that grips the dashboard and securely holds your phone in place. Due to its low level nature the mat should happily fulfill the Highway Code stipulations while still providing a useful and safe way to view the screen. 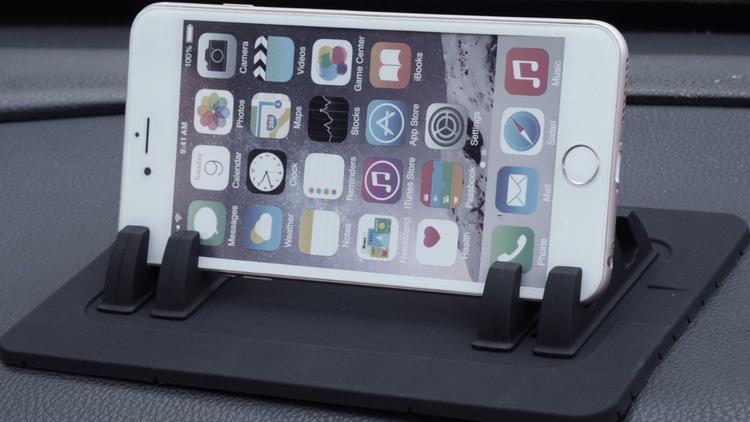 Buy the EReach Car Mount Holder for £7.99 on Amazon

A strange quirk in the law, as far as we understand it, is that even though most modern smartphones come equipped with voice control assistants (such as Cortana, Siri, and Google Assistant) actually talking to them is deemed interacting with your mobile device.

Now, we’re not sure this is something that would be provable, as you could have been talking to yourself or singing along to a tune on Spotify, but again it’s worth knowing that there are alternatives. What you can do, and we know this makes little sense, is interact with hands-free bluetooth kits that control your phone.

If your car stereo doesn’t have an AUX input or Bluetooth capabilities then one cheap and cheerful product we’ve found useful in this regard is the Nulaxy Wireless In-car Bluetooth FM transmitter. This plugs into your cigarette lighter and routes voice calls, music, and messages through your stereo system via the FM radio. It means you can take calls while driving and listen to music without cables running through the cabin. 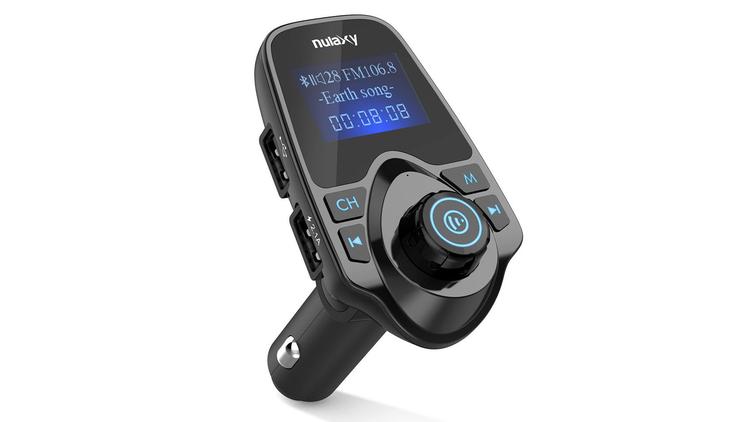 For cars that already have Bluetooth equipped you could try the SOAIY S-61 system, a small device that neatly slides onto your sun-visor and gives you access to the voice control features on your phone. This allows you to start or answer calls, control your music, and even send text messages without taking your hands off the wheel. 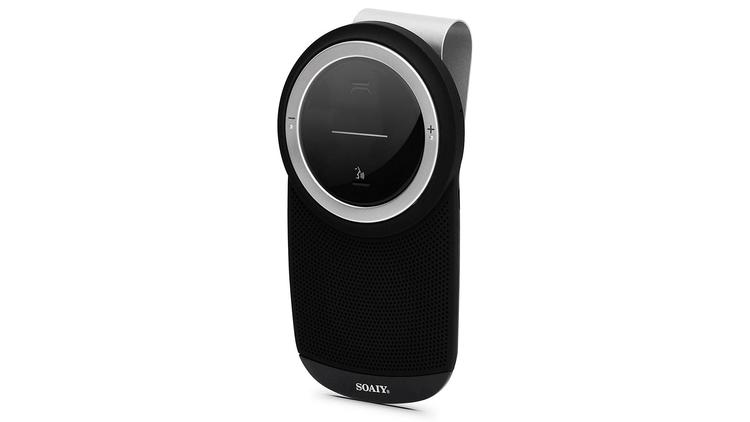 A common way that we interact with our phones while driving is to change tracks on an album or playlist. While these are short tasks, they invariably involve looking away from the road. To avoid this you could use a Bluetooth media controller that attaches to your steering wheel. These allow you to skip back and forth through songs and easily adjust the volume by using your thumb.

You’ll find a number of different models available, with the kwmobile Bluetooth Media Button being one of our favourites.

Buy the kwmobile Bluetooth Media Button for £16.40 on Amazon

So there you go, a few handy gadgets that can make using your phone in the car a lawful activity. Of course once self-driving cars are finally ready we’ll be able to fiddle with our devices till the cows come home, but for now a little restraint is still required.