Intel has revealed its first 8th-generation Core processors and we’ve got all the details including release date and specs. The first chips to arrive won’t be Coffee Lake – they’ll be Kaby Lake-based mobile chips – but Intel has now confirmed the Coffee Lake desktop range including the Core i7-8700K.

Intel officially announced its mobile 8th-generation processors on 21 August and then desktop ones on 24 September.

The firm says the mobile chips – which are low-power ‘U’ versions for mobile devices such as laptops and 2-in-1s – will arrive in September with 145 planned devices coming from manufacturing partners, 80 of which will hit shelves in time for Christmas. You can expect plenty of new devices with the chips to be announced at IFA 2017.

There are four U-series processors to start with and none of them are Coffee Lake. Instead they are based on the previous Kaby Lake architecture. The Coffee Lake range of processors starts with six desktop chips – see below for details.

AMD has now announced it rival chips, the Ryzen Mobile range – read about them here.

The first round of 8th-gen chips will be a Kaby Lake refresh rather than a jump straight to the newer Coffee Lake architecture.

That might be a disappointment for some but Intel promises a 40 percent performance gain compared to 7th-gen processors. That’s a difference the firm claims you can “see and feel” and “eclipses anything in the industry”. 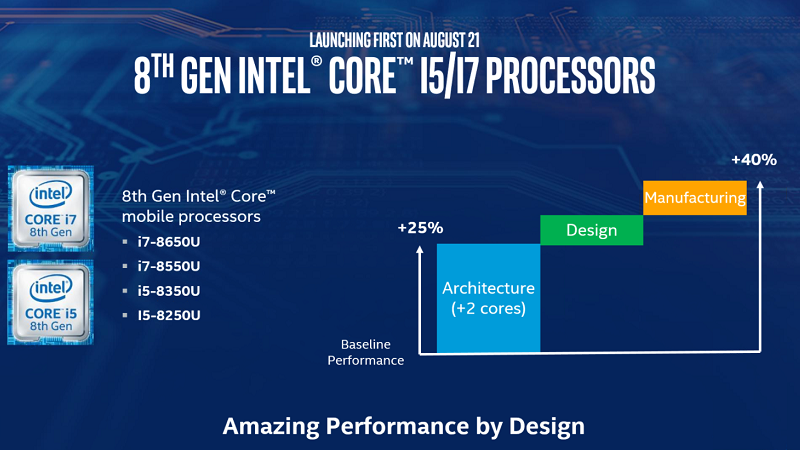 Of that 40 percent, 25 has come from adding two more cores and the rest is either design tweaks (resulting in a higher frequency) or improved manufacturing.

For those on machines five years old, upgrading to one of these new processors will mean double the performance. This is based on a comparison of Core i5s.

You can see the full specs for the first 8th-gen chips below. They are all U-series mobile processors that are 15W, either Core i5 or Core i7 and based on a 14nm+ manufacturing process.

It’s worth noting that there’s no change in the graphics department and Intel claims efficiency stays the same, so you can expect battery life of up to 10 hours on ‘sleek designs’ like ultrathin laptops.

When is the Intel Coffee Lake release date?

After months of Intel keeping quiet, we now know that the Intel 8th-gen Coffee Lake processor will arrive on 5 October. They will appear in pre-built PCs in Q4 2017. 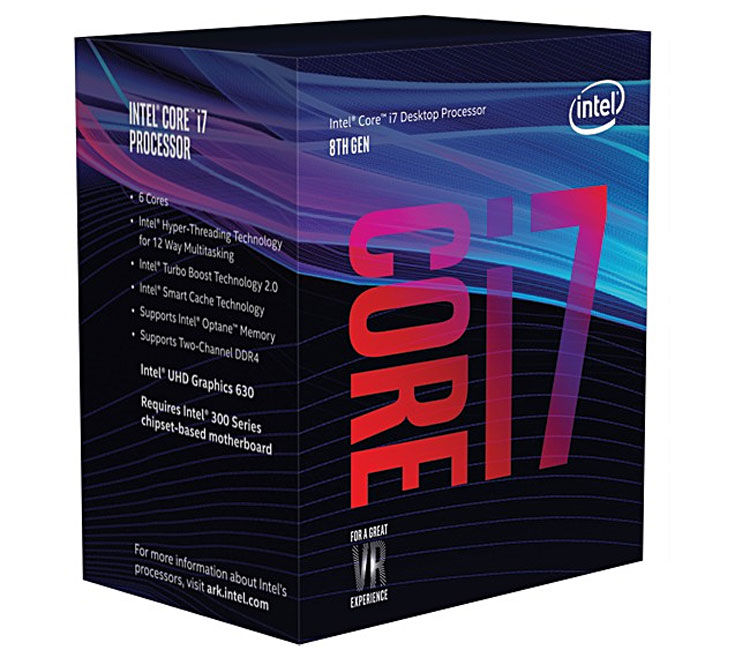 So when will Cannon Lake CPUs come out?

Cannon Lake, which could be the 8th or 9th gen Core i range (it might even straddle both), will use this smaller 10nm process, but these chips won’t go on sale for your home PC until the first half of 2018. The first Cannon Lake CPUs will be for servers, most likely in data centres.

Another milestone for 10nm: Cannon Lake on track and we’ve now taped in Ice Lake, our 2nd-generation 10nm product. pic.twitter.com/DUDm3MsBaB

No-one expected Intel to use the 14nm process a fourth time, especially as Intel has already waved a 10nm Cannon Lake chip around at CES in January 2017.

However, as the slide shows, it will have a similar performance improvement that Kaby Lake did over Skylake.

Intel Ice Lake architecture which is possibly the most likely for 9th-gen chips and will use a 10nm+ process.

Following the unveiling range of U-series processors last month, Intel has now announced its 8th-generation Core desktop processors. These will be available starting 5 October and expected in OEM devices during Q4.

The new range of processors is detailed below and consists of Core i3, i5 and i7 chips. Intel says they are “built for gamers, content creators and overclockers who require premium performance.”

At the top of the range is the i7-8700K which Intel says is its “best gaming desktop processor ever.” It offers up to 4.7GHz single-core turbo frequency which is Intel’s highest ever as an out-of-the-box speed.

These chips also have more cores than their predecessors with up to six (meaning 12 threads rather than 8 previously). There’s also more Intel Smart Cache (up to 12MB) and an improved 14nm process. There’s also memory support for DDR4-2666 RAM (DDR4-2400 for the Core i3 models) and up to 40 PCIe 3.0 lanes for system expandability on graphics, storage and input/output.

All of these chips support Intel Optane memory, too. Here’s a handy table of specs for the 8th-gen desktop chips:

In terms of performance gains, the 8700K is up to 25 percent better than the previous generation in terms of framerate as tested with Gears of War 4 – a 195fps framerate, according to Intel. It’s also 45 percent better at ‘mega-tasking’ which involves gaming, streaming and recording at the same time.

As well as gaming, Intel is promising better performance for content creation, stating that the 8th-gen desktop range can provide a boost of up to 4.5 times when creating, 65 percent when editing and 7.8 times when sharing. All of this is compared to a three year old desktop PC.

In addition, the new chips can provide up to 32 percent faster 4K video editing compared to 7th-gen.

Designing desktop chips for gamers means that overclocking is essential, at least as an option. There are six processors that make up the range, half of which are a ‘K’ model which designates overclocking capabilities.

This time around, Intel has improved the overclocking features to tempt gamers including the ability to overclock per core. There’s also real-time memory latency control, extended PLL trim controls and a maximum memory ratio of 8,400 MT/s.

Unlike the U-series chips that were announced a while ago, the 8th-gen desktop chips require a new chipset. Intel says its new Z370 chipset ensures improved power delivery that’s needed for the 6-core chips to reach maximum performance.

More than 50 new motherboard and system designs will be available from its partners. Just bear in mind that the Z370 chipset won’t work with older Intel processors such as Kaby Lake.

Why is Intel still using 14nm for Coffee Lake?

Typically, or at least in the past, the company would come up with a new architecture (the chip’s design) and then follow up with a ‘process shrink’ the following year to boost performance.

Recently, Moore’s Law, which says that the number of transistors that will fit in a given area will double every 12-18 months, has slowed down. Or so it seems.

Look beyond the headline 14nm figure, and Intel has actually improved the process without changing the figure. Intel refers to Skylake as 14nm, Kaby Lake as 14nm+ and Coffee Lake at 14nm++.

These aren’t simply names to delineate the different generations: there are actual performance improvements behind them. One is the move to FinFET – effectively a 3D transistor, as used by the latest graphics card GPUs – and along with other tweaks, it’s probably unfair to call Coffee Lake a 14nm CPU, or at least lump it in with Skylake and call it the same thing.

In any case, Intel reckons Coffee Lake will offer a 15 percent boost in performance over Kaby Lake, which itself is 15 percent quicker than Skylake.

So a Coffee Lake-powered PC should be noticeably quicker than a three-year old machine.

Intel is also likely to continue to improve the on-board GPU performance, which may well account for a decent chunk of that overall 15 percent bump. We’ll have to wait until we see the benchmark results to know for sure, of course.

The WCCFTech report claims the 8th-gen chips will feature Intel’s GT2-level graphics core with a minimum clock speed of 350 MHz.

Should you wait for Coffee Lake or Cannon Lake?

This is the perennial question with tech: should you buy now, or wait a few months for the next-gen chip.

Without prices and benchmark results, it’s an unanswerable question right now. Plus, unless you already have a recent Intel PC that’s likely to be compatible with Coffee Lake, you’ve also got to consider an AMD Ryzen system.

With Kaby Lake, we saw it first in low-power laptops and 2-in-1s, then on the desktop in early 2017. However, if the rumours are true and Intel’s going to reveal the new chips at Gamescom, then we could well see desktop chips first.

There will probably come a point where you have a choice of a Cannon Lake or Coffee Lake processor, but it’s far too early to say which will be the one to buy.