The latest game in the long-running Assassin’s Creed franchise is called Assassin’s Creed: Origins, and it’s one of our  most anticipated games of the year. The new game is a prequel showing the origins of the Assassins, and takes on a new setting for the series: ancient Egypt.

There’s been a slow drip of rumours and teases about the game ever since the release of Assassin’s Creed: Syndicate in October 2015. We’ve rounded up all the news about the game’s best deals, platforms and gameplay, along with the official launch trailer that can be found above.

When is the Assassin’s Creed: Origins release date?

While rumours throughout early 2017 suggested that the upcoming Assassin’s Creed title could be delayed into 2018, Activision took to the stage at E3 2017 to announce an earlier release date: 27 October 2017 – the same day as Stranger Things series 2 arrives.

Assassin’s Creed has been an annual series ever since 2009, but that all changed with the release of 2015’s Assassin’s Creed: Syndicate. While that game was a hit with critics, its  sales were below publisher Ubisoft’s expectations, perhaps hampered in part by the poor reaction to 2014’s Assassin’s Creed: Unity, which was beleaguered by bugs on its release.

That led the  development team to announce in February 2016 that “there will not be a new Assassin’s Creed game in 2016,” and that they would be using the extra development time “to evolve the game mechanics and to make sure we’re delivering on the promise of Assassin’s Creed offering unique and memorable gameplay experiences that make history everyone’s playground.” 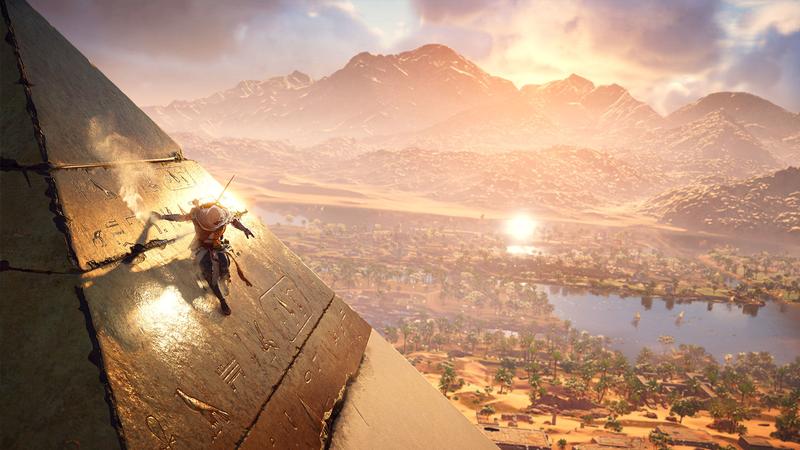 Which platforms is Assassin’s Creed: Origins available on?

Like with previous titles in the Assassin’s Creed series, Origins is available to buy not only on PS4 and Xbox One (with support for PS4 Pro and Microsoft’s new Xbox One X) but also PC.

If you want to get into the serious special editions, the place to head is the official Ubisoft store. There’ll you’ll be able to order the game’s Standard, Deluxe, and Gold editions, along with the limited God’s, Dawn of the Creed, and Dawn of the Creed Legendary editions – the latter of which costs a frankly ridiculous £699/$799. 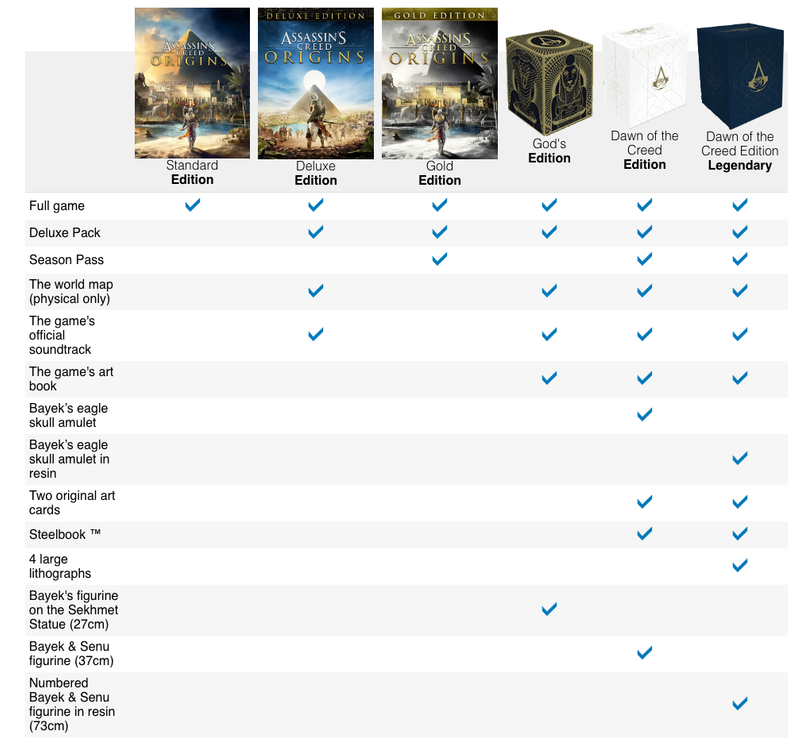 After four years in development by Ubisoft Montreal, Assassin’s Creed: Origins was revealed in all its glory at E3 2017. In the game, set in Ancient Egypt, you play as Bayek, an Egyptian sheriff going up against those corrupting Egypt. The struggle eventually leads to the creation of the Assassin Brotherhood, so think of Origins as exactly that – the origin story of the Brotherhood.

The game’s open world environment spans from the Mediterranean Sea to the tombs of Giza, although most of the gameplay is focused on two ancient Egyptian cities: Memphis and Alexandria. Described as a “brand new vision” for the series by Ubisoft, the game includes action-RPG elements including the likes of leveling up, loot drops, and the ability to customise your character.

Oh, and towers are gone – instead of traversing tall buildings to get an understanding of the local area (along with access to side quests and points of interest) as is the case in previous AC games, Bayek has access to an eagle, Senu, that can be used to spy on the surrounding area and figure out what’s what.

Senu is controlled similarly to the drone in Watch Dogs 2, allowing you to spot objectives and mark both enemies and areas of interest. Once upgraded, you can even use him to swoop down and attack enemies or serve as a distraction.

The combat showcased in the above gameplay walkthrough looks pretty slick, too. While previous entries in the series have been a little hit-and-miss when it comes to combat, Origins looks to take inspiration from the likes of Dark Souls and The Witcher 3, both of which were regarded as having intuitive combat systems.

The system has been completely revamped, making it much easier to fight multiple enemies at once, rather than them each patiently waiting their turn. You now have heavy and light attacks mapped to the shoulder and bumper triggers, with other buttons to block and evade. You’ll also often have to break enemy stances before they’re vulnerable to attack.

There are a bunch of other changes to the game too, including the introduction of skill trees that push the game away from its stealthy beginnings into a game that’s much more action- and stat-orientated, and tiered loot drops to further emphasis the RPG elements.

Missions have been tweaked so that the game world feels more realistic, with characters going about their routines. For example, you might be tasked with killing someone who follows a set schedule in the day, with breaks for lunch or to visit other people, and an entirely different night time routine – it will be up to you when you strike.

Underwater gameplay has also been expanded from Black Flag. It’s now integrated into the main game, rather than locked in separate missions, and Bayek can hold his breath for a good while as you explore the riverbed for loot and objectives. There’ll be some naval combat too, but not on the scale of Black Flag.

The game will also be making the most of the new Egyptian setting. Not only is it an excuse to slide down pyramids, it also means new architecture, new weaponry, and new African wildlife, all of which is showcased in the ‘Mysteries of Egypt’ trailer from E3, which really shows off the appeal of the new setting.

The game also allows you to customise the HUD, including removing the mini-map, to really make the most of the Egyptian surroundings.

And, thanks to an interview in the latest issue of PC Gamer with game director Jean Guesdon, we also know that the AI has been completely rewritten in Origins. This means that, in theory, no two players will have the same experience when playing the game. Speaking to PC Gamer, Guesdon explained how:

“We want players to have their own personal experience, which means less scripting and less handholding. We create a world, we place some content in it – we have dozens of quests, and people that you will meet who will tell you stories. But in between, when you’re in the world, a lot of things can happen. And no two people will have the same experience – it’s just not possible.”

“We’ve reworked the AI so that all living beings in the world are real AI. The lions are hunting antelopes, the crocodiles are attacking hippos if there are any around, and the world is much more living than before.”

The game will also support microtransactions, with in-game currency Helix Credits allowing you to buy Loot boxes. You can buy various packages, as listed here.

With months to go until the release of Assassin’s Creed Origins, we expect to see more information as time goes on, so head back here soon for the latest AC: Origins gameplay news.

As well as an incredibly in-depth open world game, Ubisoft has also confirmed the addition of an entirely different way to experience the game: Discovery Tour.

Discovery Tour is set to make an appearance in Assassin’s Creed: Origins at some point in early 2018 and will be a free download for all owners of the game – but what is it? Assassin’s Creed devs have always been proud of the lengths they go to recreate the time period that the game is set in, providing tidbits of historically accurate information alongside stealthy gameplay.

It has been taken to the next level in Origins. Discovery Tour removes all combat, stealth and narratives from the game and allows anyone to explore the immersive model of ancient Egypt that the team has created. In place of missions, you’ll find a range of virtual guided tours throughout the open world, with Ubisoft calling it an ‘open world museum’.

You’ll get the opportunity to learn about all things Ancient Egypt including the process of mummification, the lighthouse of Alexandria and more. It was developed with help from historians and specialists on Ancient Egypt to provide something both engaging and historically accurate.

It’s not every day that you see games that try to teach the gamers while they play, and should be an invaluable resource for kids learning about Ancient Egypt if nothing else!