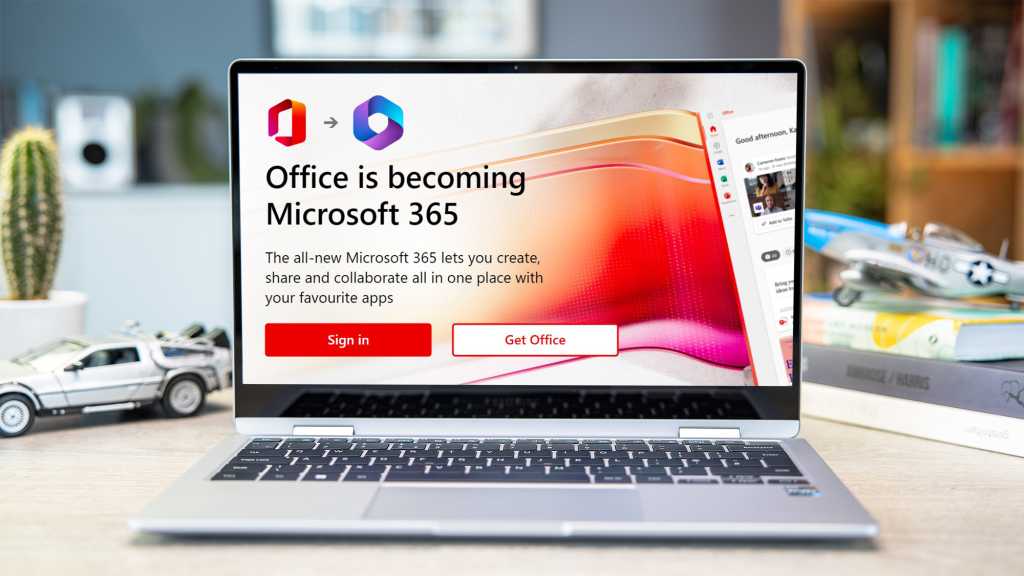 Microsoft Office began life all the way back in 1990, predating widespread availability of the internet. It’s undergone a variety of changes in that time, but maintained the same name – until now.

In October 2022, Microsoft announced that it would be rebranding standalone versions of Office apps to ‘Microsoft 365’. That matches what we saw with the company’s productivity-focused subscription service in 2020, which shifted to the same name.

At its most basic, paying regularly gets you access to Word, PowerPoint, Excel, OneNote and Publisher, plus Teams for communication and Outlook for email. You also get cloud storage via OneDrive and regular updates, but even more software is available on professional and business plans.

While this article is designed to help you decide between them, it’s far from your only option. As has always been the case, Microsoft continues to release standalone versions of Office apps every few years. The latest version was released in 2021, but aside from software patches, you won’t get any updates.

For some people, it’s also possible to access Microsoft Office free or at a discounted rate. Here’s everything you need to know.

How to get Microsoft Office on your laptop or PC

In years gone by, the best (and only) way to get Office was to buy a CD-ROM for a one-off price and install it onto your PC or laptop. These days that would be a bit of a faff, with many laptops not even having disc drives anymore, but it was one way to ensure you had a physical backup.

Nowadays, Office is available as a download, but you can either buy it outright with a one time purchase, or as a monthly subscription. There are advantages to either options.

There are also several different versions of Office available, and you should choose the best one for you depending on your needs. It’s worth noting that while this buying guide covers every platform, Mac users might want to take a look at the specific Office for Mac buying guide on our sister site Macworld.

Which version of Microsoft Office do you have?

If you’re looking to upgrade, it’s easy to check which version of Microsoft Office you have installed. Provided you’ve downloaded all the apps at the same time, they should all be running the same version.

For the purpose of this article, we’re using Microsoft Word. The process may vary slightly depending on your device and app, but it should still be easy to find:

However, the process differs on older Office apps. In Word 2010, you need to choose ‘File’, then ‘Help’. The information will then be displayed on the right side of the screen, as you can see below.

It’s different again in Word 2007. Click on the round Microsoft Office icon in the top left and then ‘Word Options’ at the bottom of the menu. Next, choose ‘Resources’ – the last option on the left-side panel. You should see an ‘About’ button at the bottom of the list which will provide you additional details about the version that you own.

In the 2003 version, go to the ‘Help’ option in the top menu bar, and then the ‘About Microsoft Office Word’. In the pop-up, you will see the MS Office World version along with the suite it belong to, like the Microsoft Office Professional Edition 2003.

Will Windows 11 come with Microsoft Office?

No, it doesn’t. Windows 11 was released in 2021 and is a free upgrade for most Windows 10 users, but Microsoft Office apps aren’t included. All your existing files and apps will make the move, though, so if you already have a standalone version (such as Office 2019 or Office 2021) it’ll still be available.

But everyone else will need to pay for access. Learn more in our separate guide: Does Windows 11 come with Microsoft Office?

Microsoft’s productivity-focused subscription service was known as Office 365 from its initial launch in 2011 until 2020. Since April 2020 it’s been known simply as ‘Microsoft 365’, but the rebrand didn’t affect functionality aside from a few new features.

First up are the options designed for the individual consumer (i.e. probably you). If you’re subscribing, there are two main options to choose from: Personal (for just one user) or Family (for up to six users). For both, you have the option to pay monthly or annually:

There’s also a special free version for students and university staff which we’ll get to later.

The main benefit to opting for Microsoft 365 is that you’ll get regular updates for as long as you’re a subscriber, with no need to jump from one version to the next every few years, and no headaches about file compatibility.

You can also save your work to the cloud, similar to Google Docs. Microsoft also throws in a few extra benefits such as 1TB of cloud storage and full access to Microsoft Teams.

If you’re subscribing, there currently two main options to choose from: Personal (for just one user) or Family (for up to six users). For both, you have the option to pay monthly or annually:

The extra £20/$30 per year or £2/$3 per month for the Family subscription is a great deal if you choose to share the subscription costs among friends. The yearly subscriptions save you on two months of payment as well.

There’s also no device limit on Microsoft 365 installations, meaning both Family or Personal subscribers can install the software on as many devices as needed. You are limited to working on five devices simultaneously, though.

Office 365 Education is (as the name suggests) a special version of Microsoft 365 for students and university faculty or staff. Students and teachers can sign up for free web access to Word, Excel, PowerPoint, OneNote and Microsoft Teams under the Office 365 A1 plan.

Unsurprisingly, you’ll need a university email address or other proof of your status to claim it. See our full article on how to get Microsoft Word for free.

If you want to look for other great student tech deals, check out Tech Advisor’s back to school hub.

If you would prefer to pay a one-off price, Office Home and Student 2021 is the right package for you. You lose the automatic software updates of Microsoft 365, but that means you can use the software for years without being tied into a subscription. It works with one device running Windows 11, Windows 10 or any recent version of macOS.

However, you don’t get full access to the mobile and tablet apps here (anyone can still use them to view documents for free, just not edit or create them), there’s no cloud storage included, and you don’t get access to the full suite of Office programs included in Microsoft 365 subscriptions.

Office 2021 includes new features such as a black theme in Word, new learning tools, new charts and timelines, new transitions in PowerPoint and lots more. But unlike a Microsoft 365 subscription, it won’t continue getting new features over time.

It’s also worth noting that Microsoft Office will soon be known as Microsoft 365 following a rebrand, but it’ll still perform in exactly the same way.

Microsoft also offers business-minded versions of its software. We’re focusing on the options for small businesses here, but Microsoft also offers Enterprise plans for larger companies. Once again, there’s a split between the 365 subscription packages and the one-off purchase version of Office 2021.

There are three main versions of Microsoft 365 Business available, each offering very different software packages, so make sure you pick the right one. Be especially mindful about Microsoft 365 Business Basic (from $6/£4.50 per user per month), which doesn’t actually include desktop versions of the core Office software like Word and Excel – just Microsoft’s online and cloud tools.

Also note the Microsoft 365 Apps for business plan ($8.25/£7.90 per user per month) includes both desktop and mobile version of the apps but without the other productivity tools such as email, calendar and Teams conference call features.