In November Qualcomm announced that its next-generation flagship processor would be the Snapdragon 835 – not the Snapdragon 830 as expected – and that it would be manufactured using the 10nm process in partnership with Samsung, which also made the Snapdragon 820 and 821 as part of a decade-long collaboration between the two companies. Few details were available at the time, but at CES 2017 Qualcomm has offered new information, which we have outlined below.Also see: Windows 10 is coming to Snapdragon 835.

Now in production and expected to make it to devices by the first half of 2017, the Snapdragon 835 is exciting because it’s the processor expected to be used in the upcoming Samsung Galaxy S8 smartphone, and likely a whole host of other flagship phones in 2017 including the HTC 11, OnePlus 4 and LG G6. See also: Best smartphones 2016.

Or at least it was, with Forbes now reporting that the LG G6 (which will launch earlier than the Galaxy S8) will not be allowed to use the chip because Samsung (which is helping Qualcomm build the chip) has first dibs. We assume this would also apply to the HTC 11 (or HTC U), and that both phones would instead have to run the Snapdragon 821 which doesn’t offer a huge improvement over last year’s Snapdragon 820. Of course, none of this has been confirmed, and it doesn’t ring true with us. We have contacted Qualcomm for comment and will update this article accordingly if and when we hear back.

The 835 is the first Qualcomm processor to be made with a 10nm process, which will bring various improvements including performance and efficiency, which in turn will result in better battery life for devices.

“Using the new 10nm process node is expected to allow our premium tier Snapdragon 835 processor to deliver greater power efficiency and increase performance while also allowing us to add a number of new capabilities that can improve the user experience of tomorrow’s mobile devices,” added Kressin.

Compared to its 14nm process, Samsung 10nm method offers up to 30 percent increase in area efficiency with 27 percent higher performance or up to 40 percent lower power consumption.

Since this is Qualcomm’s first 10nm processor, it’s extremely small and fits 3bn transistors. It’s smaller than an average human fingernail in surface and 1,000x thinner than a strange of hair. This should result in thinner phones, space for bigger batteries, better efficiency and therefore longer battery life. (The below image shows it beside the larger Snapdragon 820.) 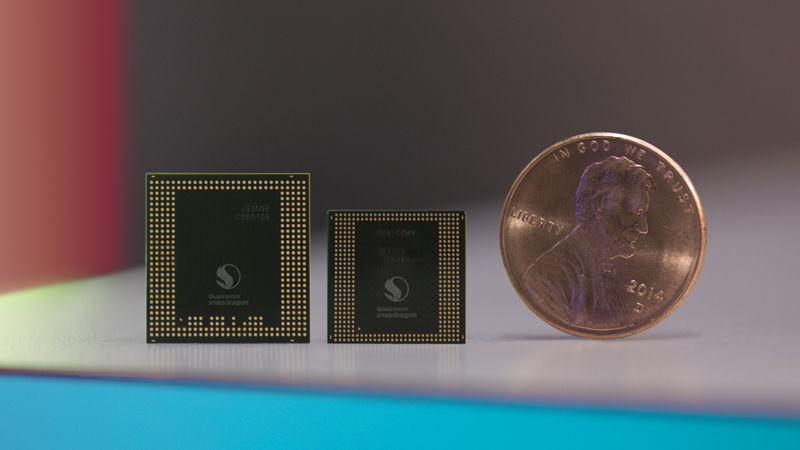 The Snapdragon 835 specs most people will want to know include that the processor Kryo 280 CPU is octa-core with a clock speed of up to 2.45GHz. The big.LITTLE architecture means that four of the cores are a lower 1.8GHz. One cluster is for performance and the other is for efficiency.

Headline performance figures include 25 percent faster graphics rendering and half the power consumption compared the Snapdragon 801. It’s also got 20 percent extra performance vs the 820.

We’ll go into more depth below as Qualcomm has highlighted ‘five key experience pillars’ relating to the new chip.

This is probably top of most people’s feature request list for gadgets and Qualcomm says the Snapdragon 835 is its most efficient Snapdragon processor to date – as you’d hope.

It’s 50 percent more efficient than the Snapdragon 801 via a combination of things. Partly the 10nm process but also a clever way of sending tasks to the right parts of the chip – either the CPU, GPU or DSP – using the Symphony System Manager.

Also related to battery life is the fact that the Snapdragon 835 comes with Quick Charge 4 for up to 20 percent faster charging compared to version 3.0.

This is all about live entertainment and gaming in virtual and AR worlds, according to Qualcomm.

What we’re talking about mainly is a beefed up GPU with 25 percent faster graphics rendering and additional features in this area like HDR10 (10bit)/4K UHD Premium and jitter free display.

Specifically on the VR side of things Qualcomm has ensured the Snapdragon 835 can support 15ms motions to photon latency, which is crucial for not feeling ill. The chip is also Google Daydream ‘ready’. 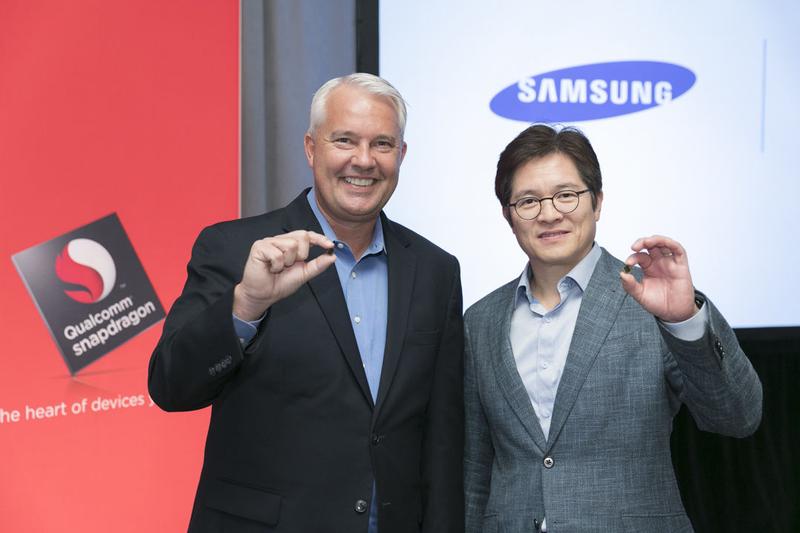 Photography and video capture is top of many smartphone users wish lists and the Snapdragon 835 promises to bring improvements in this area.

Qualcomm said at the Snapdragon Summit that the firm has worked on features such as smooth zoom with low power IS (image stabilisation). The Spectre ISP (image signal processor) is split for wind angle and telephoto, and you can also expect EIS 3.0 (electronic image stabilisation) which brings 2160p, gyro based pitch, yaw and roll correction.

“At the core of the capture experience is the Qualcomm Spectra 180 camera ISP, featuring dual 14-bit ISPs that will enable up to 32MP single or dual 16MP cameras for the ultimate photography and videography experience,” said the firm.

On auto focus the phase detection AF is using paired photodiodes on every pixel rather than five percent for better results. The 835 also supports next gen large 1.4um pixel split into two photodiodes. A hybrid auto focus uses contrast, 2PD or laser/IR.

‘True to life video’ comes with the 835 consisting of HDR 4K with EIS, HDR10 playback and Perceptual Quantization (improves quality with scene analysis, lower bitrate and file size by 30%).

Qualcomm says that LTE will be the key to unlocking future applications such as VR, Cloud and Entertainment so connectivity is a key pillar of the Snapdragon 835.

It’s the first chip to have X16 gigabit speeds and also features 11ad multi-gigabit Wi-Fi. With average speeds of 114Mbps on Cat 16 LTE, users can get a 20MB Instant App in just 1.4 seconds.

3x carrier aggregation allows for faster speeds and 4×4 MIMO can double the traffic.

There are already plenty of security measures around already and the Qualcomm Haven security platform supports solutions such as fingerprint scanners, eye based systems (iris or retina) and facial using camera (need IR and camera).

The firm also mentioned that ‘voice print’ can be used as part of multi-factor (not for primary but good as secondary) and can be always on.