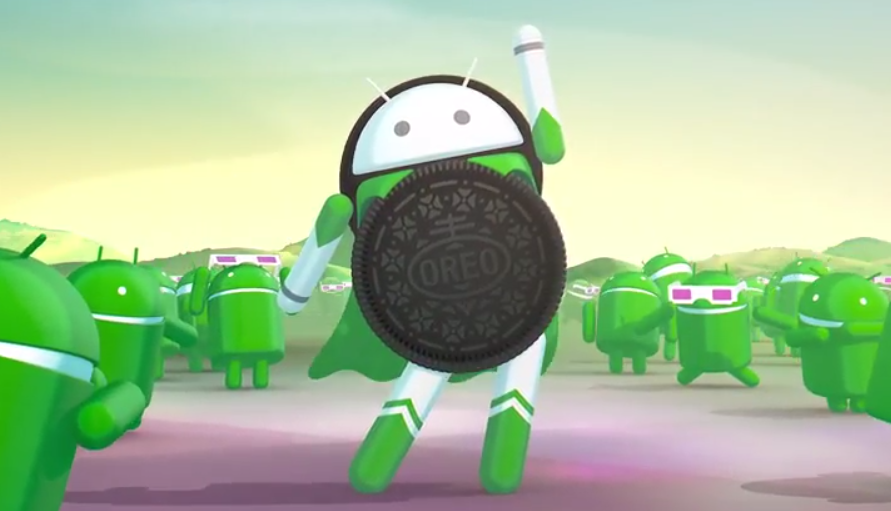 Android has unveiled the final version of Android 8.0, now known to be called Oreo. We explain the new features coming to your Android phone or tablet – imminently if you have a Nexus or Pixel device.

What is Android 8.0 called?

When is the Android Oreo release date?

Google unveiled the Developer Preview of Android O in March 2017, ahead of its May Google I/O Developer’s Conference. Since then we’ve had various public betas, and on 21 August 2017 Google announced the final version.

Google said it would begin rolling out the OTA update to Pixel and Nexus devices soon, but at first was pushing Oreo only to Android Open Source Project (AOSP) for other manufacturers to begin working on their own updates. (Those on the public beta were updated immediately.)

Google states: “We’re pushing the sources to Android Open Source Project (AOSP) for everyone to access today. Pixel and Nexus 5X/6P builds have entered carrier testing, and we expect to start rolling out in phases soon, alongside Pixel C and Nexus Player.”

That day is here, it would appear, as Google is now suggesting the OS is rolling out to Pixel and Nexus devices:

Google adds in its blog post: “We’ve also been working closely with our partners, and by the end of this year, hardware makers including Essential, General Mobile, HMD Global Home of Nokia Phones, Huawei, HTC, Kyocera, LG, Motorola, Samsung, Sharp and Sony are scheduled to launch or upgrade devices to Android 8.0 Oreo.

“Any devices enrolled in the Android Beta Program will also receive this final version.“

What new features are coming to Android O?

Android O focuses on ‘fluid experiences’ and vitals, with new features headlining during its first public appearance at Google I/O 2017 including picture in picture (multi-windowing mode), notification dots (long-press an app shortcut to view the notification right there onscreen).

There’s also autofill (like in Chrome but now in apps), and Smart Text Selection (automatically recognises names, addresses and phone numbers so you don’t have to fiddle around with selection handles; it can also suggest a relevant app).

Android O is much more streamlined than Nougat with various OS optimisations. The bottom line, according to Google, is that devices boot twice as fast and all apps run faster and smoother by default.

On the subject of apps Google is also introducing Play Protect, which installs every app on a per-device basis in order to keep things ultra-secure.

There are many more changes coming to the OS, including such things as a redesigned Settings menu and Project Treble – the latter in essence ensuring all users get Android OS updates much faster. (Also see:  Android Oreo vs Android Nougat)

At Google I/O 2017 we learned about notification dots – when you have a notification a small dot appears on the shortcut for that app. Long-press the app shortcut and you’ll be able to view the notification right there without pulling down the drop-down notification bar: 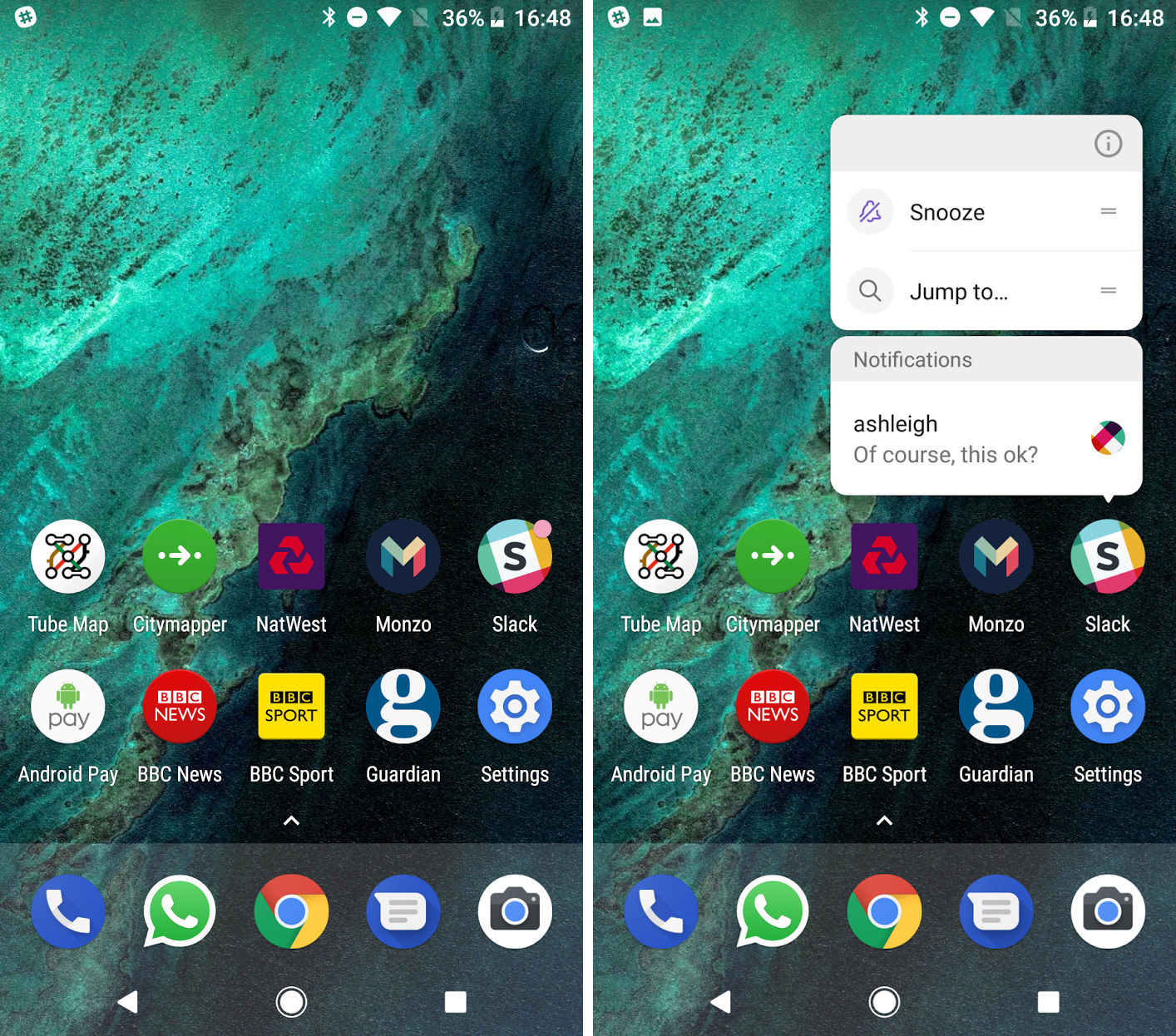 Android O will be able to recognise names, addresses and phone numbers – some of the most commonly copied information types – so you no longer need to fiddle around with text handles (it will automatically select the correct portion of the text). As well as the usual copy and paste controls Android O is also able to serve up relevant app suggestions for how you might wish to use that data.

In Android Nougat Google introduced the ability to restrict certain app activities in the background, and in Android O it improves on this by placing the priority on extending battery life without user-input.

We’ve previously seen autofill in Chrome, and with Android O Google is bringing it to apps. Users will have to opt in to this service, but will then find it easier to fill in login and credit-card information forms with fewer mistakes and much less repetition.

Picture-in-picture (a multi-windowing mode), which is already available on Android TV, is coming to Android O. 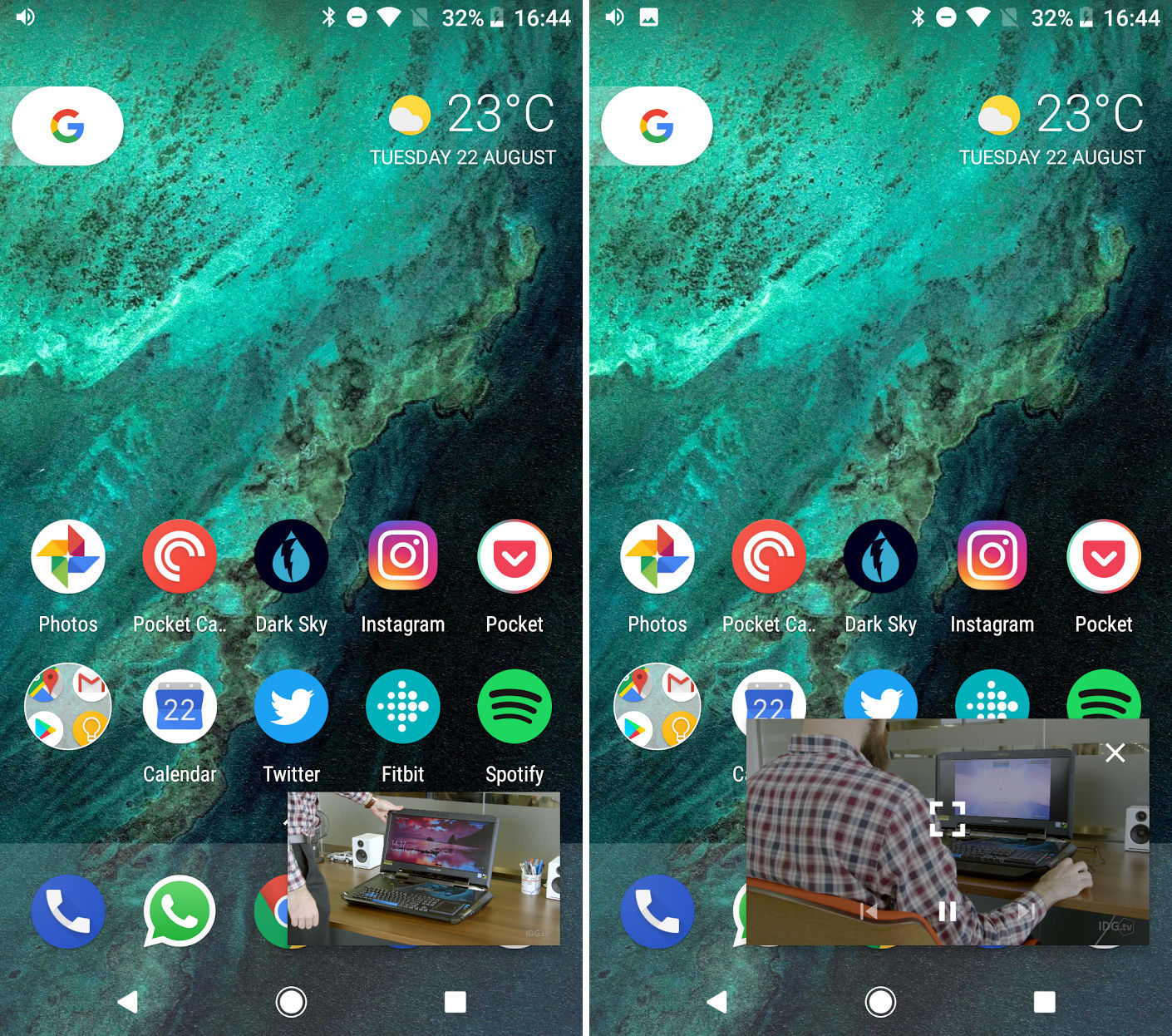 It’s clever enough to minimise video embedded in Chrome. It must be full screen, but then you tap the home button and it changes to the above left image. The above right is the expanded image you get from tapping.

Tap and hold lets you drag it anywhere on the screen.

Android O won’t be restricted to phones, so there will be improved arrow and tab key navigation for when used with a physical keyboard.

Icons in Android O will support visual effects and can be displayed in various shapes on different devices.

Wi-Fi Aware will allows apps and nearby devices to discover and communicate over Wi-Fi without an internet access point. We’ll also see improved Bluetooth support for high-quality audio through the Sony LDAC codec, and new ways for third-party calling apps to work with each other and with your network operator’s special features.

Interestingly, Android O will be able to support multiple displays, allowing a user to move an activity to one screen to the next.

Every app will have a storage space quota for cached data, and when the system needs to free up disk space it will delete data from apps using more than their allocated quota first.

Google says it has made the profile owner and device owner management modes more powerful, productive and easier to provision than ever, with highlights including the ability to use a managed profile on a corporate-owned device and enterprise management for file-based encryption.

You can read about the new updates coming to Android O in more detail over on the Android Developer’s site.

We were already aware of a few user-facing features coming to Android O thanks to a tip-off from  VentureBeat, though there was no confirmation that they would make it through to the final build.

This feature is expected to ease copying text from one app and pasting it within another by giving suggestions in the second app as to what you might be about to type based on what you were doing in the previous app. VentureBeat gives the example of finding a restaurant in the Yelp app, then opening a text conversation, beginning to type ‘It’s at’ and the restaurant name popping up as a suggested term. It is currently unclear whether it will be a new feature on the Gboard virtual keyboard or baked into Android itself.

Right now it isn’t possible to share your current location on Android as it is in iOS, but according to VentureBeat there are some new changes coming that make dealing with addresses easier. If you click on an address in a text message, in Android N it does nothing but in Android O it could open that address in Google Maps. It says it is not yet known whether this will be functional only in Google’s Messages app, or in all messaging apps on Android O.

Today you can quickly call up your contacts using Ok Google, but in Android O you will be able to draw onscreen the letter C to open your contacts menu. This is similar to what we’ve seen in many Chinese phones – the ability to in standby mode draw onscreen a letter and open an app of your choice – though here it should work when the screen is switched on and in any app. This feature may not be ready in time for Android O, however, the source warned.

Will my phone get Android O?

Google phones and tablets are always the first to get new operating system updates, but even Google won’t support them forever. Security updates are provided for three years following the device’s release, or 18 months after it is removed from the Google Play Store (whichever is longer).

Older Nexus devices will not be upgraded.

Google has said it will roll out the update to compatible Pixel and Nexus devices soon, and we’ll update this article when we have an exact date.

If you have a recent flagship phone or tablet from a well-known maker such as Sony, Samsung, HTC, LG or Motorola, it’s likely you’ll see the update rolled out within the next few months.

Google is already pushing out the code to AOSP for other manufacturers to get started with, and says devices from Essential, General Mobile, HMD Global Home of Nokia Phones, Huawei, HTC, Kyocera, LG, Motorola, Samsung, Sharp and Sony will launch or update devices running Android 8.0 Oreo.

However, before you can get the update both the hardware manufacturer and mobile operator must be ready to roll it out, which can slow down things.

Or, at least, that has always been the case in the past. Ahead of Google I/O the company announced Project Treble, which in essence makes it easier for manufacturers to roll out operating system updates to customers faster.

In its promotion of the Moto G4 Plus, Motorola has already said it will receive Android Nougat and Android O. OnePlus has also confirmed the update will come to the OnePlus 3, 3T and 5.

If you’e running a mid-range or budget model it’s likely that you will never get Android O. Android OS fragmentation is still an issue, and at the last count on 8 August 2017 there were still devices running Gingerbread (via Android Developers).

What else is rumoured for future Android operating systems?

Google has recently been awarded a patent for a new form of drag and drop that allows you to share content between apps. You might, for example, drag an address from a text message and drop it into Maps, or a forwarded photo straight into Photos.

Andromeda is a Google operating system that is in essence a mash-up of Chrome OS and Android and has been rumoured for about as long as we can remember.

When Hiroshi Lockheimer tweeted in late September that Google’s October event was going to be as memorable as the one in which Google announced Android (not his exact words – see below), the internet went crazy trying to guess what it is that could possibly warrant such hype.

The only logical suggestion was Andromeda, but of course what we actually got was the first ‘Made by Google’ phones.

We announced the 1st version of Android 8 years ago today. I have a feeling 8 years from now we’ll be talking about Oct 4, 2016.

However, Andromeda is still allegedly on the cards, and Android Police assures us that Andromeda is an actual thing and not the figment of many Google fan’s creative imaginations.

It points to a Wall Street Journal report that Google was intending to fold the two operating systems into one to better suit a range of hardware platforms. This would open the doors to a new market sector in which Google has previously tried and failed: the lucrative world of laptops.

According to WSJ Andromeda won’t see the light until 2017.