The third Apple Watch is available to buy now. Apple announced it at a special event held at its new campus in Cupertino. The Apple Watch Series 3 itself looks the same, but the big news was that it has built-in LTE cellular data (provided you’re using it in your home territory).

Now the big news is that the LTE won’t work correctly abroad (it doesn’t support roaming)… or in the UK it would appear.

According to a Reuters report, Apple has admitted its new Watch has connectivity issues when making phone calls and using LTE data without an iPhone nearby.

Several critics who have got hold of the Watch ahead of the release date for review purposes have complained that it has problems with connectivity when encountering open Wi-Fi networks at a coffee shop or restaurant, for example.

They have also said making phone calls over the watch empties the battery in an hour, while the advertised battery life is 18 hours.

Apple says the problem will be fixed and rolled out in a future software update.

One other thing you’ll want to be aware of when buying the LTE version is that only iMessage texts can be sent independently of the iPhone – to send a standard text message you’ll still need your phone close by.

When is the Apple Watch 3 release date?

You were able to pre-order an Apple Watch 3 from 15 September, with the new device officially going on sale on 22 September. That applies to the standard version. If you want a Nike+ or Hermes, you’ll be waiting until 5 October.

Those who didn’t pre-order immediately are seeing delivery dates slip back into October, but some reports suggest they are then shipping earlier than expected.

Take a look at our guide to the best places to buy the Apple Watch 3 if you’re interested in picking one up.

The cellular version will first go on sale in nine countries including the UK and the US, while the Wi-Fi-only model will be available in 26 countries. In the UK, EE will be the only mobile operator to begin with. You can buy directly from EE on contract, or buy the Watch from Apple, John Lewis, Currys, or other retailers.

EE has said it will offer a £5 per month tariff for the watch over and above your existing phone tariff, with the first six months free. US carriers – Verizon, AT&T, Spring, and T-Mobile – will charge $10 per month. 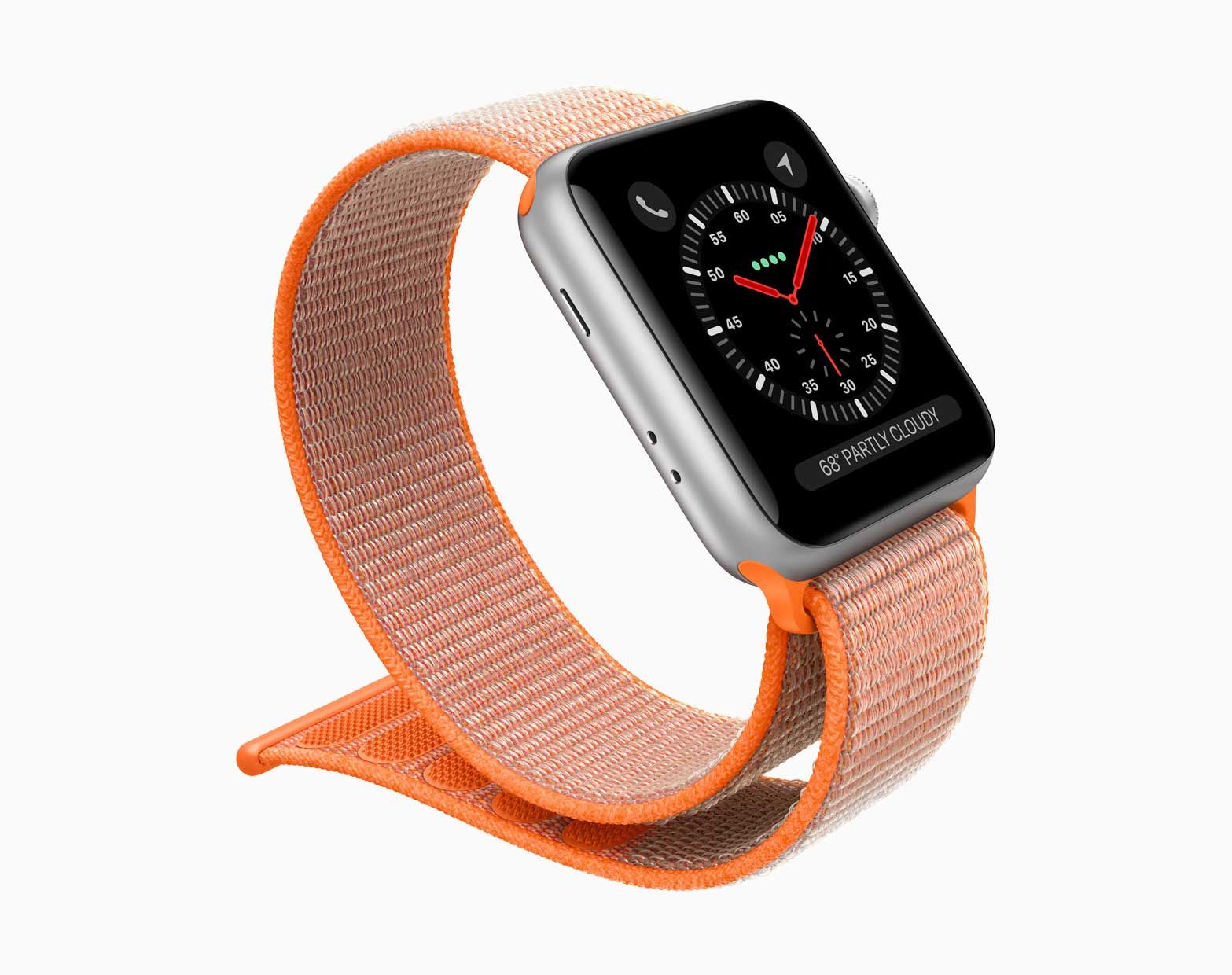 How much does the Apple Watch 3 cost?

There are new colours and bands, including a sporty loop band (above), new colours for the Nike versions and a new rose gold aluminium version. If you have loads of money, then there’s a new grey ceramic finish.

It’s obvious from the photos that the new wearable is very much like its predecessors. In fact, it’s hard to tell it apart – at least from the outside. iFixit has done a teardown to find out exactly what components are inside the Apple Watch 3, and we’ve explained how the Watch 3 differs from the Watch 2 separately.

One of the things it has found include a 1.07Wh battery, a slight increase over the 1.03Wh battery inside the Apple Watch 2, and the 0.78Wh battery in the original. This is despite Apple not changing the form factor of the watch itself.

So what’s new? Well, there’s built-in LTE. This means you don’t need your iPhone nearby in order for it to connect to the internet, allowing all apps to work anywhere in the UK.

(It’s worth pointing out that the Apple Watch 3 LTE does not support roaming, so the additional features enabled by the e-SIM will not work abroad.)

Plus, it means you can make and receive phone calls and messages: usefully it will share your iPhone’s phone number.

You’ll also be able to stream Apple Music while you’re on a run, and use Siri to find the album or track you’re after.

Apparently, Intel is supplying the modem for the watch, partly because it’s smaller and uses less power than Qualcomm’s, but probably also because Apple is currently suing Qualcomm.

Inside is a new dual-core processor, the S3. It’s up to 70 percent quicker than the Series 2. As well as making everything generally more responsive this also allows Siri to talk for the first time on a Watch.

Alongside it is the W2 wireless chip, which is said to make Wi-Fi 85 percent faster and Bluetooth and Wi-Fi 50 percent more power efficient.

There’s also a barometric altimeter which does things such as measuring flights of stairs climbed.

To keep it the same size as the Series 2 even with more packed in, the screen was made into the antenna for Wi-Fi and LTE and an e-SIM is used instead of a nano SIM.

The battery is said to last “all day”. Specifically that’s up to 18 hours of mixed Wi-Fi and LTE use.

This update is focused more on health, but it has quite a few useful changes that make it easier to get stuff done. For example, there’s a new Siri watch face which shows you relevant information as your day progresses. 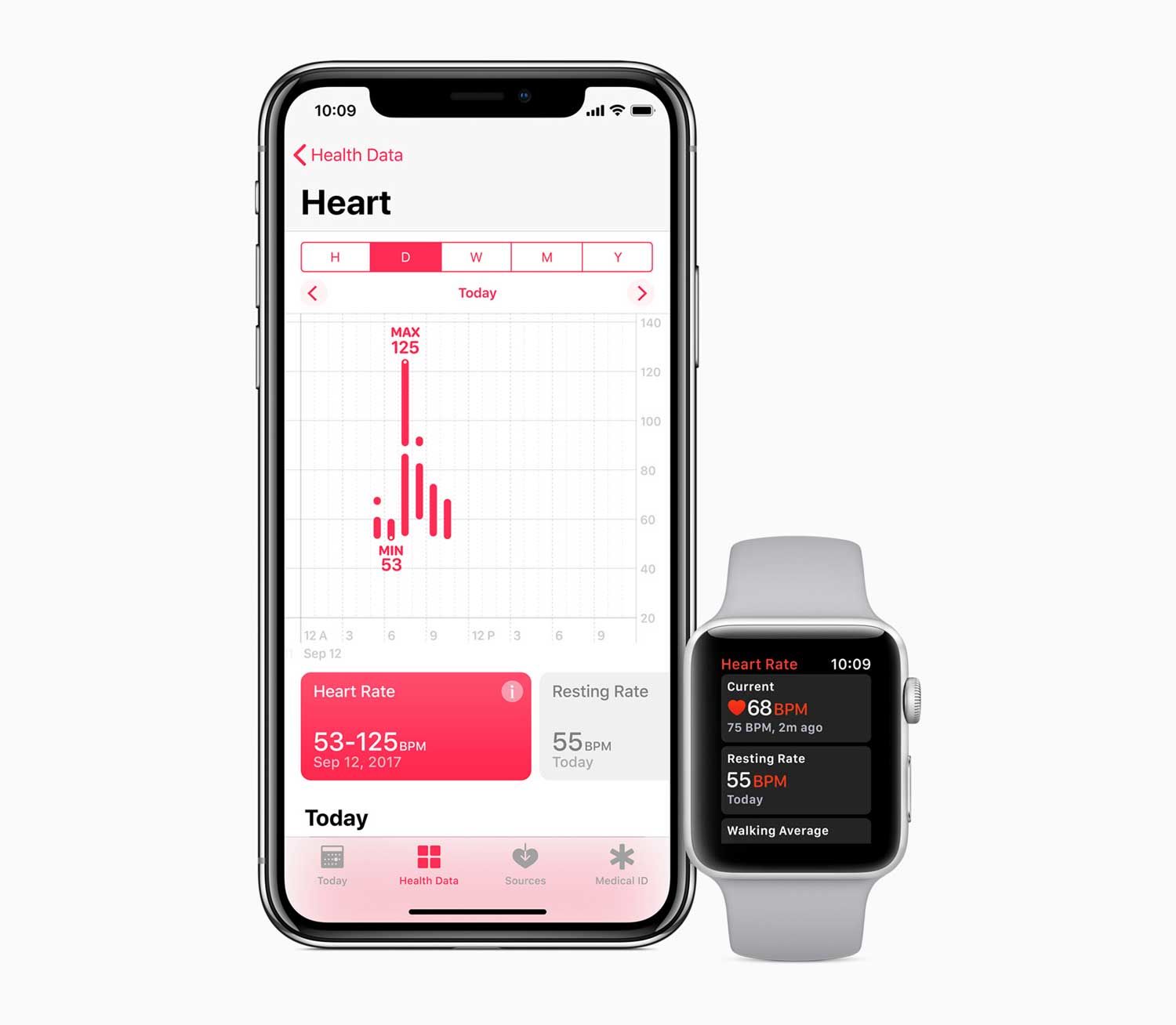 In terms of health and fitness, you can much more easily start a workout, and you can swipe to see your music controls while exercising.

Plus, you’ll now see your heart rate as a complication when you raise your arm to look at the screen.

It will also measure your resting heart rate throughout the day and also give you notifications when your heart rate is unusually high when you’re not active. Plus, it will tell you about abnormal heart patterns, which often go undiagnosed.

watchOS 4 will be released on 19 September for all Apple Watches.

Read more about the new features in watchOS 4.

What’s not in the Apple Watch 3?

Apple didn’t mention the following features, which we hope will be introduced either in a watchOS update or in the next Watch: