After announcing a ‘Platinum’ version of the   Mavic Pro, DJI has introduced a limited edition Alpine White model. Here’s what you need to know about the DJI Mavic Pro Alpine White release date, price and features.

Where can I buy a Mavic Pro Alpine White?

The white version goes on sale 16 November and is exclusively available from Apple and DJI’s website, as well as DJI’s ‘flagship stores’ around the world.

The Platinum version is available  from DJI’s website and other retailers including Heliguy. Also check out the smaller and cheaper Mavic Air.

How much does the Mavic Pro cost?

The limited edition Alpine White costs £1149, or US$1049.95. This is a special ‘Holiday Combo pack’  which includes a remote controller, two extra batteries, two additional pairs of propellers and an ‘aircraft sleeve’.

There’s also a Fly More Combo pack, which includes the Mavic Pro Platinum along with two extra Intelligent Flight Batteries, extra propellers, a charging hub, an adapter, a car charger and a shoulder bag for £1459 (US$1399).

Is there anything different about the Alpine White?

Other than the colour, no. It is a limited edition (the number hasn’t been specified) which comes with a few extras, as detailed above. It is otherwise the same as the original Mavic Pro in terms of its specs.

What are the Mavic Pro Platinum features?

There are two main upgrades over the Mavic Pro: new propellers and new ESCs (the electronics which control the motors). Why should you care? Because combined they make the Platinum 60 percent quieter than the Mavic Pro when taking off and landing, and allow it to fly for 30 minutes.

Sure, that’s only three minutes longer, but longer is always better. And yes, the props will fit the original Mavic Pro, but you won’t see quite the same benefits.

The other change is the colour from dark grey to ‘platinum’ – a more silvery colour. 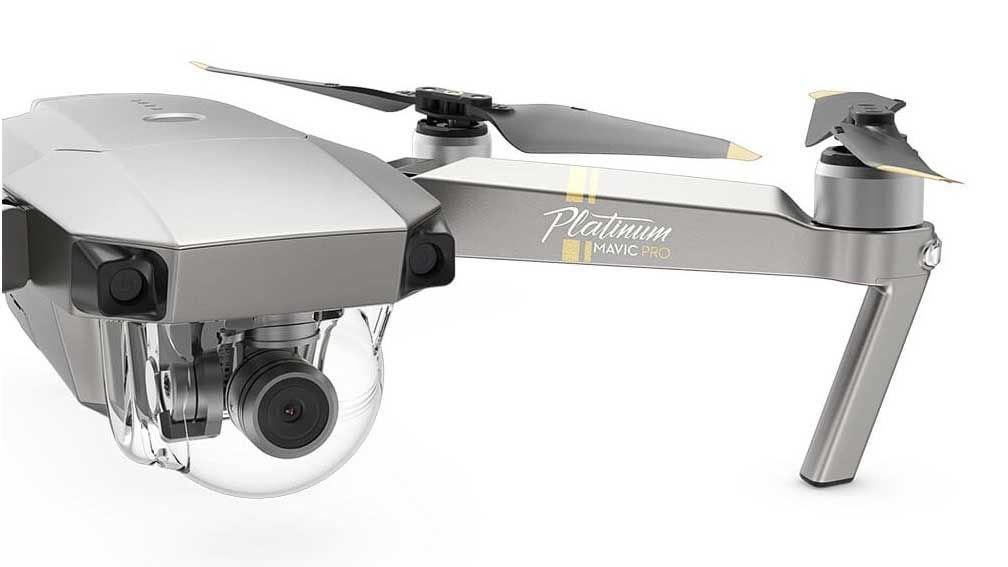 For those unfamiliar with the Mavic Pro, its design is completely different to the Phantom range. It has a smaller three-axis gimbal and a similar setup to the Phantom 4 for obstacle avoidance and low- or indoor flying.

As well as being compact – 83 x 83 x 198mm when folded – the aim of the Mavic Pro is to be easy for even novices to fly with confidence and use it to get great 4K-resolution aerial video plus 12Mp photos and even selfies (the gimbal can flip the camera 90 degrees to portrait mode for this). Nothing has changed on this front for the Platinum version.

As the images show, the gimbal is protected by a clear plastic housing which can help protect the delicate mechanism should you crash the Mavic, though for the best video quality it should be removed.

Below, you can see the two front-facing low-resolution cameras above and either side of the gimbal which are used for obstable avoidance. 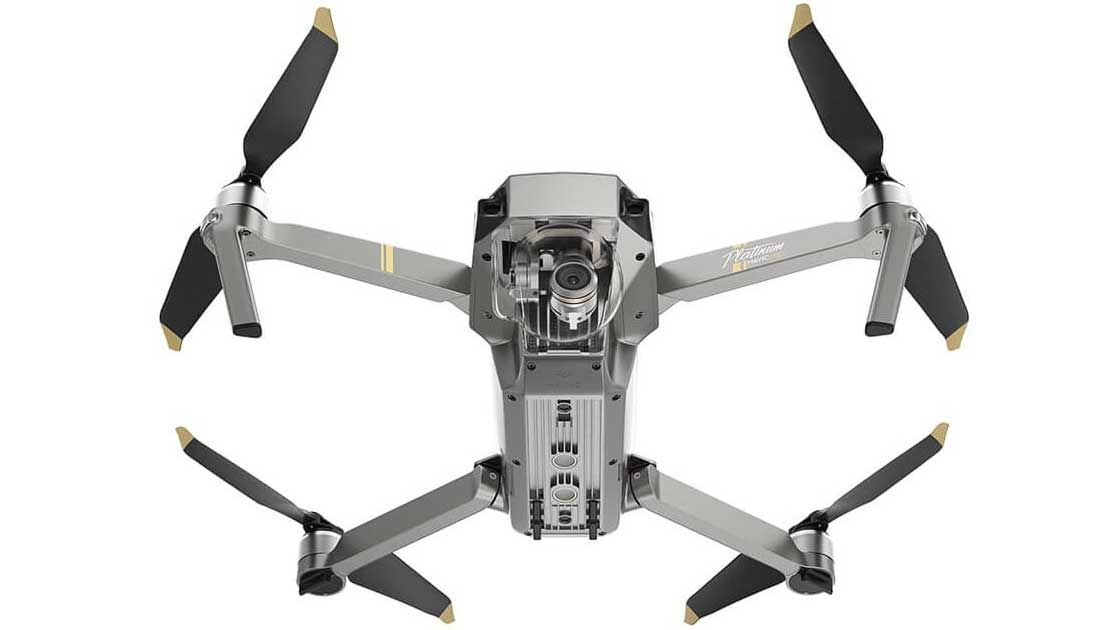 The Mavic Pro’s arms and propellers all fold up and you can fit it into a small bag or purse. It’s not nearly as tiny as the Spark, though.

It has all the automatic flight modes the Phantom 4 does, but including ActiveTrack. It can recognise cyclists, cars, boats and animals. You can choose whether to follow from behind, lead in front, circle above or track alongside.

Plus there’s a nifty Terrain Follow mode which uses the on-board sensors (including ultrasonic) to intelligently follow at a certain height above the ground from 0.3m up to 10m.

You can control the Mavic Pro with your hands using gestures. These include being able to take a selfie and centre yourself in the frame. This means you won’t be snapped holding the controller.

When taking off, two cameras record video. The Mavic Pro then uses this along with GPS to land exactly where it took off, to within 1in, DJI claims.

Here are some of the Mavic Pro Platinum’s main specs: 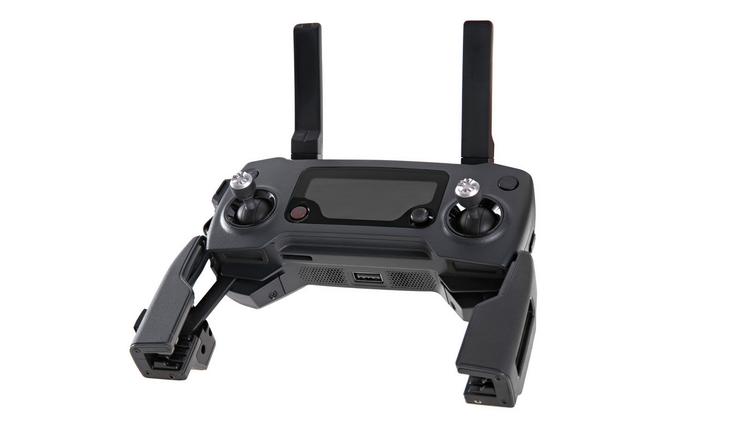 The controller is identical to the Mavic Pro’s – it hasn’t had a colour change. It can be used on its own, or has fold-out arms which hold a smartphone. The controller’s screen shows key flight stats such as altitude, distance and remaining battery life.

It has dedicated buttons for return-to-home and a pause button to stop the drone while it’s flying in its automatic modes. On the right-hand side is a switch for quickly flipping to Sport mode. It’s much like GoPro’s new controller, and the 3DR Solo remote.

The Mavic has a new flight system, OcuSync. This is what allows such long-range flight and DJI says it allows for 1080p live video right up to 7km.

The Platinum is compatible – of course – with DJI’s Goggles, they also use OcuSync so the video is transmitted directly without going through the controller and adding lag. You can switch from FPV to third-person video in less than a second, and flip up the mask to exit FPV mode. They have two 1920×1080 screens, and can display the full 1080p video stream from the drone.