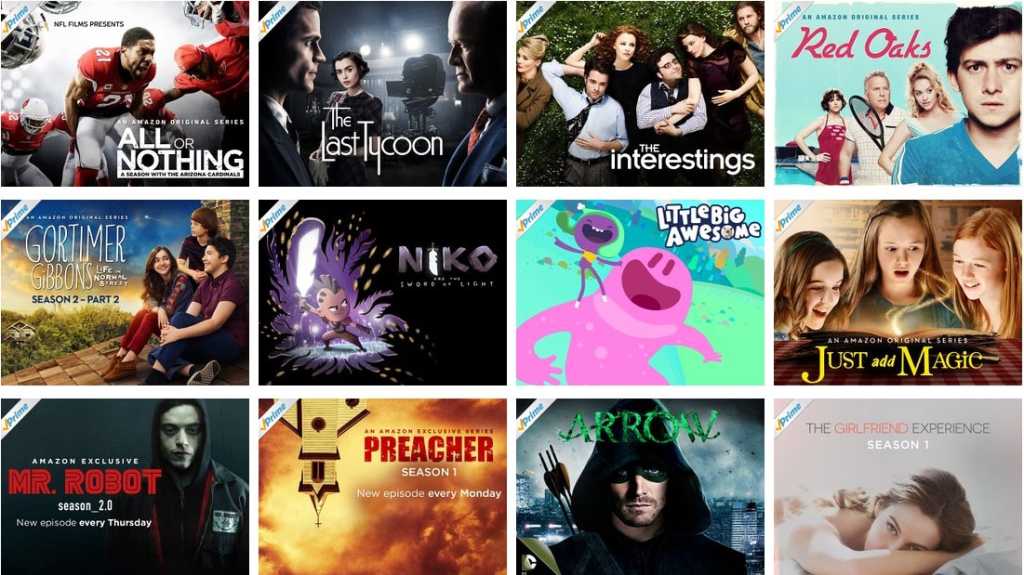 Amazon Prime Video is Netflix’s biggest rival, allowing you to stream and even download unlimited TV shows and movies. You can access Amazon Prime Video on your smart TV, phone, tablet, games console, computer and other devices, so you can take your shows with you and watch them wherever you are. Here, we round-up the best TV shows to watch on Amazon Prime Video in the UK.

If you’re not yet signed up to Amazon Prime or Amazon Prime Video, you can get a free 30-day trial right now to watch these great shows. Follow the links below to find out more:

Think we’ve missed something? Let us know in the comments section below.

Arrow When: 2012 (continuing) Who: Stephen Arnell, Katie Cassidy, David Ramsey IMDB rating: 8/10 Amazon says: After being marooned for five years on a remote island, billionaire Oliver Queen returns home with a mysterious agenda and a lethal set of new skills that he uses in a war on crime in this hard-hitting action series.

Outlander When: 2014 (continuing) Who: Caitriona Balfe, Sam Heughan, Duncan Lacroix IMDB rating: 8.5/10 Amazon says: Follow the story of Clair Randall, a married combat nurse from 1945 who is mysteriously swept back in time to 1743, where she is immediately thrown into an unknown world where her life is threatened. When she meets Jamie Fraser, a chivalrous and romantic young Scottish warrior, her heart is town between to vastly different men in to irreconcilable lives.

Preacher When: 2016 (continuing) Who: Dominic Cooper, Joseph Gilgun, Evan Goldberg IMDB rating: 8.6/10 Amazon says: Based on the popular, cult comic book franchise of the same name, “Preacher” is a supernatural, twisted and darkly comedic drama that follows a West Texas preacher named Jesse Custer, who is inhabited by a mysterious entity that causes him to develop a highly unusual power.

Vikings When: 2013 (continuing) Who: Travis Fimmel, Katheryn Winnick IMDB rating: 8.6/10 Amazon says: Introducing the extraordinarily complex and violent world of the Norsemen, The History Channel’s first scripted series races the gripping sagas of historical hero Ragnar Lothbrok. As claimed direct descendent of Odin, god of war and warriors, Lothbrok’s mystical nature and devotion to the gods feed his stealthy manoeuvres and determination to become King of the Vikings.

Lucifer When: 2015 (continuing) Who: Tom Ellis, Lauren German IMDB rating: 8.4/10 Amazon says: Bored and unhappy as the Lord of Hell, Lucifer Morningstar has resigned his throne and retired to the City of Angels, where he teams up with an LAPD detective to solve crimes. Whether it’s a suppressed desire to punish the wicked or something deeper, the very thought that he could care about a human being disturbs him. But he’s having too much fun to stop now.

The Man in the High Castle When: 2015 (continuing) Who: Luke Kleintank, Arnold Chun, Alexa Davalos IMDB rating: 8.1/10 Amazon says: An Amazon Originals Series – Based on Philip K. Dick’s award-winning novel, and executive produced by Ridley Scott (Blade Runner), The Man in the High Castle explores what it would be like if the Allied Powers had lost WWII, and Japan and Germany ruled the United States.

The 100 When: 2014 (continuing) Who: Eliza Taylor, Eli Goree, Thomas McDonell IMDB rating: 7.8/10 Amazon says: Ninety-seven years ago, Earth was devastated by a nuclear apocalypse, with the only survivors being the inhabitants of orbiting space stations at the time. Three generations later, resources are running out. Taking ruthless steps to ensure their future, a group of 100 juvenile prisoners are exiled to the Earth’s surface to test whether it’s habitable. No one has set foot on the planet until now.

Bosch When: 2014 (continuing) Who: Titus Welliver, Jamie Hector, Amy Aquino IMDB rating: 8.3/10 Amazon says: An Amazon Original: Based on Michael Connely’s best-selling book series, Bosch, an LAPD homicide detective works to solve the murder of a 13-year-old boy while standing trial in federal court for the murder of a serial killer.

Mr Robot When: 2015 (continuing) Who: Rami Malek, Christian Slater, Portia Doubleday IMDB rating: 8.8.10 Amazon says: Mr. Robot follows Elliot, a cyber-security engineer by day and vigilante hacker by night, who gets recruited by a mysterious underground group to destroy the firm he is paid to protect.

Prison Break When: 2005 – 2009 Who: Dominic Purcell, Wentworth Miller, Amaury Nolasco IMDB rating: 8.5/10 Amazon says: Lincoln Burrows is currently on death row and scheduled to die in a few months for an assassination his younger brother, Michael, is convinced he did not commit. With no other options and time winding down, Michael takes drastic measures to get himself incarcerated alongside his brother in Fox River State Penitentiary.

ConstantineWhen: 2014 – 2015 Who: Matt Ryan, Harold Perrinaeu, Charles Halford IMDB rating: 7.5/10 Amazon says: Seasoned demon hunter and master of the occult John Constantine is armed with a ferocious knowledge of the dark arts and wicked wit. With the balance of good and evil on the line, Constantine uses his skills to find the supernatural terrors that threaten our world and send them back where they belong. After that, who knows… maybe there’s hope for him and his soul after all.

Catastrophe When: 2015 (continuing) Who: Sharon Morgan, Rob Delaney, Mark Bonnar IMDB rating: 8.2/10 Amazon says: Rob Delaney and Sharon Horgan write and star in Catastrophe, a comedy following an Irish woman and an American man who make a bloody mess as they struggle to fall in love in London. Clumsy lust, instant pregnancy, and genuine disaster provide the foundation for this flaming hovel of a relationship.

Hand of God When: 2014 (continuing) Who: Garret Dillahunt, Emayatzy Corinealdi, Julian Acosta IMDB rating: 7.5/10 Amazon says: An Amazon Originals Series – A psychological drama about a morally-corrupt judge who suffers a breakdown and believes God is compelling him onto a path of vigilante justice.

The Following When: 2013 – 2015 Who: Kevin Bacon, James Purefoy, Shawn Ashmore IMDB rating: 7.5/10 Amazon says: Kevin Bacon and James Purefoy star in this terrifying thriller from Kevin Williamson that follows a former FBI agent called in to help track down a charismatic and diabolical serial killer.

The X Files When: 1993 (continuing) Who: David Duchovny, Gillian Anderson, Mitch Pileggi IMDB rating: 8.7/10 Amazon says: A young FBI agent is assigned duty over a fellow agent, but finds herself drawn into his investigations of paranormal and unexplained phenomena.