Back at E3 2015, Microsoft announced Sea of Thieves, the multiplayer action-packed pirate game exclusive to Windows 10 and Xbox One. Nearly three years later, the game is now available to play via Xbox Play Anywhere, allowing you to play on both PC and console.

Coming from legendary developer Rare, Sea of Thieves was one of our most anticipated releases and we think it has the potential to become one of the best games on the Xbox One. Here’s everything we know, including the release date, gameplay details, deals and trailers.

We went hands-on with the game, and if you want to find out what we thought, check out our Sea of Thieves initial review.

When is Sea of Thieves being released in the UK?

Following months of silence from the studio and a handful of push-backs, Rare announced at the Game Awards 2017 that Sea of Thieves would be released on PC and Xbox One on 20 March 2018.

With Xbox Play Anywhere support, players are now able to play the game on both platforms after buying just one copy (as long as it’s through the official Microsoft digital store), and their save data will even be synced across both platforms.

You can currently pick up the game via both  Amazon and  Game. The PC version of the game is currently listed at £49.99, while the Xbox One version is cheaper at £41.99, while both versions are $59.99 in the US, but we imagine this will drop somewhat in the coming weeks.

What can we expect from Sea of Thieves?

Sea of Thieves is an open world multiplayer game which involves running around, sailing, exploring, engaging in naval warfare and working as a five-man pirate team.

You’ll be able to play as a five-man ship, which was showcased in the gameplay reveal trailer, but you’ll also be able to sail in smaller one or two player ships. That means that even if the rest of your crew is offline, you’ll still be able to set sail and wreak havoc.

As an adventurous pirate, you’ll naturally be able to entertain yourself by playing music and even drinking. Funnily enough, this feature does make you somewhat tipsy in-game, blurring your vision and making it hard to hard to control your character; so drink responsibly. 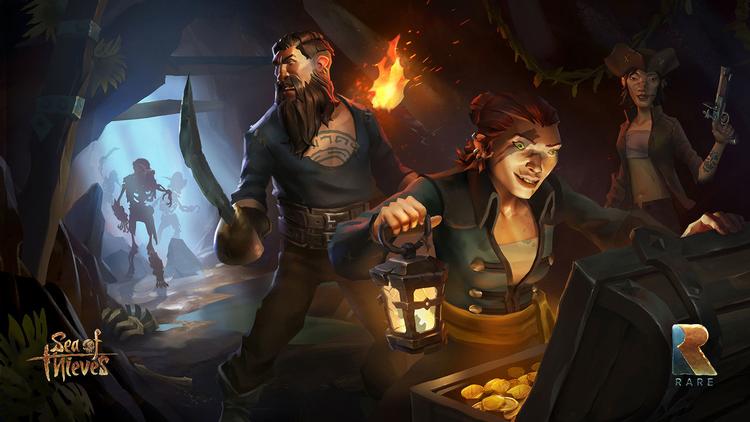 In the gameplay trailer, it was shown that various players can have various roles whilst playing the game, with communication being the key to success. Whilst on sail, you can steer, raise/lower the anchor, fire cannons, and even fix water leaks on the lower decks while your crew take on the attacking enemy.

In order to keep some realism, the wind can hinder your ship’s performance, meaning you’ll have to plan your attacks or manoeuvres tactically.

The game will contain missions and ways of levelling up, allowing you to customise the look and functionality of your ship. If your ship sinks, it will be vulnerable to plunder from other pirates until you get the chance to reclaim it.

Microsoft showcased a second gameplay trailer at E3 2017 where it was also announced that the full release of the game had been pushed back until early 2018, giving us a more in-depth look at the gameplay and mechanics. The full video can be seen below.

Then, at Gamescom 2017, Rare confirmed that Sea of Thieves will feature cross-play between PC and Xbox One. The announcement took place during Microsoft’s Xbox-themed Gamescom livestream where PC lead Ted Timmins and executive producer Joe Neate confirmed that console and PC players would go head-to-head when the game comes out in 2018.

There’s also a post on the Sea of Thieves website where Timmins goes into more detail about how the cross-play will work:

“One of the things we’re very aware of is the need for the balancing to be right,” Timmins said.

“After running some recent tests, we found that PC players were 4.5 percent more efficient at killing skeletons than Xbox players, and this feels close enough that it’s something we’ll continue to monitor.”

“However, PvP between platforms, or more importantly device input, is the big focus point for us as a design team, and already we’ve been working closely with the game experience team to change the way the guns work to be better balanced for crossplay.”

“We’ve put in a bunch of telemetry around this, and with the change to guns it’s made them feel tonally so much more fitting, as previously they felt more like laser weapons than ancient plundered-and-pillaged gunpowder-driven blunderbusses.”