Following the launch of the original game back in 2013, State of Decay 2 is almost here. Initially announced at E3 2016, here’s everything we know about State of Decay 2 including the release date, platforms, gameplay and trailers. For a more in-depth look at what to expect, take a look at our State of Decay 2 review.

“The next instalment in the critically acclaimed “State of Decay” franchise immerses you in an all-new, multiplayer zombie survival fantasy. Build a lasting community, working with other players or solo to overcome challenges while exploring your own unique story in a world that remembers the choices you make,” said Undead Labs which is partnering with Microsoft Studios on the new game.

Interested in other games coming out this year? Take a look at our list of best upcoming games of 2018.

State of Decay 2: Daybreak is the latest DLC addition for State of Decay 2. This additional content will be released on 12 September and will cost roughly £9.

Daybreak will see you take control of a Red Talon soldier and defend an outpost from waves of undead as one of your technicians attempts to activate a satellite up-link. There will be a host of weapons to unlock and resources that you can take back to your community in the real world.

There is only one map, and while this horde mode can be played with up to 3 other people, the £9 price tag seems a little steep for what you’re getting here. Metal Gear: Survive contains a very similar multiplayer component that seems much more fleshed out and also came with the base game at no additional cost.

When will State of Decay 2 be released?

While the game was initially slated for a 2017 release, Microsoft announced at its E3 2017 press conference that State of Decay 2 will now be released in Spring 2018, with no specific date. It wasn’t until 2018 that Microsoft and Undead Labs announced that the game would be released on 22 May 2018.

State of Decay 2 will launch exclusively on Xbox One and Window 10, and it also boasts support for Microsoft’s high-end  Xbox One X. It’s an Xbox Play Anywhere title too, so you’ll be able to play across both Xbox and PC with one purchase of the game – as long as you buy it from the Microsoft Store (£24.99/$29.99).

If you want to get your hands on the game four days early, on 18 May, you can pay a little extra and pick up the  Ultimate Edition for £39.99.

Undead Labs says it will have ‘more to share in the future’ in regards to a Steam launch. 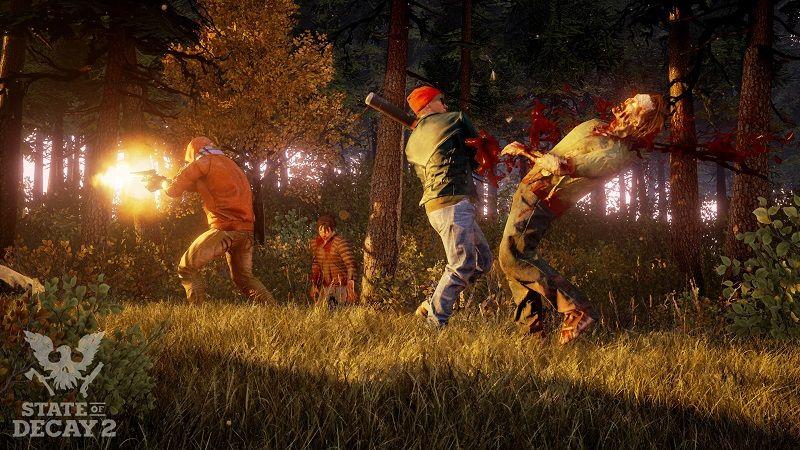 What can I expect from State of Decay 2 gameplay?

You can watch the State of Decay 2 cinematic trailer at the top of the page to get a feel for the game but here are some more details on the gameplay and features. The game is set 18 months after the zombie apocalypse in a refugee camp abandoned by the military. Survivors of the apocalypse must band together to gather supplies, build a community and try to survive the onslaught of zombies.

In State of Decay 2 there is no single protagonist; instead, you play as an entire community. The developer says that each survivor in the game is their own person with a mix of ‘background traits, skills, and attitudes that determine what they can do, what they want, and what they are willing to do to get it’.

With this in mind, no two stories are alike in State of Decay 2 as the community and the collective choices will shape how the game plays. It’s an open world game ‘filled with dynamic zombie and human enemies, friendly survivors to recruit into your community, and valuable resources and gear necessary to keep your people alive’.

You can play State of Decay 2 solo but, for the first time, you can play four-play co-op multiplayer with your friends. You can invite them to your game or drop into theirs. Each player remains in charge of their own community of characters.

“Work together as you explore the deadly post-apocalyptic environment, watching each other’s backs and sharing the rewards of your accomplishments,” says Undead Labs.

What’s interesting is that it’s not a server hosted MMO (massively multiplayer online) game, but it used to be. Undead Labs founder Jeff Strain told IGN that it wanted to give fans “exactly what they want,” which is co-op multiplayer.

“This is not a session-based experience. It’s drop-in/drop-out. The key thing that I want everybody to know is, it doesn’t require you to be online. We’ve designed it very much with the intention of it being the easiest, most convenient type of multiplayer you can imagine,” said Strain.

For a better idea of what to expect, take a look at the State of Decay 2 trailer, first showcased at E3 2017.