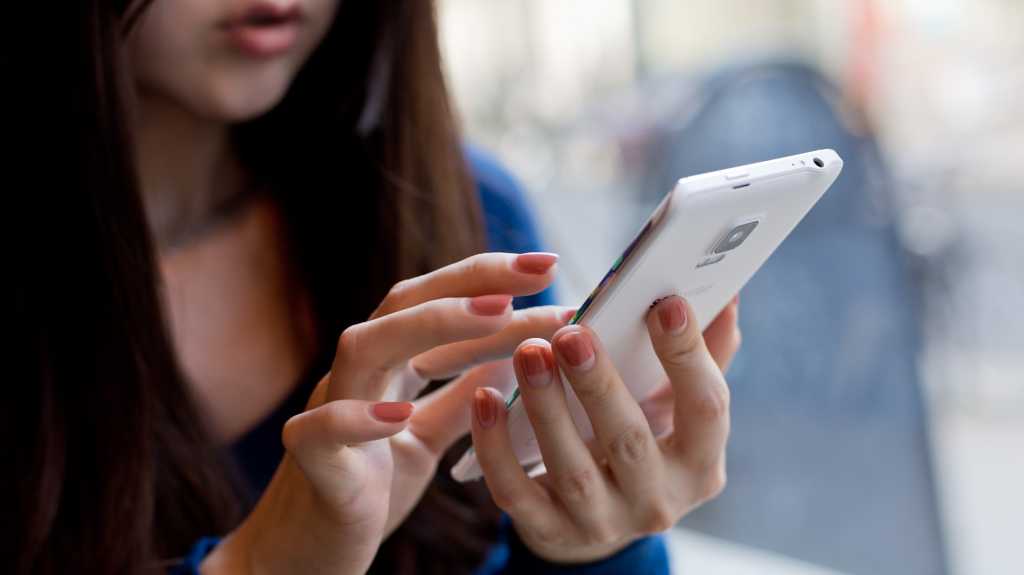 Android users can often find that over time their devices slow down from the lighting pace that they usually arrive with. There can be a number of factors for this, but one that we are often asked about is unwanted apps running in the background. In this feature we’ll look at how you can stop these from launching and what to do if they just won’t stay closed. See also: Best upcoming phones in 2016/2017

How to stop Android apps starting automatically: Why stop them?

Everything that runs on your device has some kind of impact on the resources available for memory, CPU, and battery power. For the most part this isn’t an issue as Android is actually designed to fill up its RAM with apps so that users have a fast experience. If performance starts to dip the system will begin closing down the least used ones in order to claim back speed. For these reasons it can be counterproductive to close down apps via something like a dedicated Task Killer app, as Android prefers to maintain its own environment.

See also: How to speed up your Android phone

But if you have an app that insists on starting up even though you haven’t asked it to, and then sits there in the background, you could find your device becoming sluggish or battery life being drained away. In these cases you’ll need to take the rogue programs to task. Sometimes the problem is due to poor coding, or a bug, while other apps use your phone’s GPS and other location features which can sap battery power. 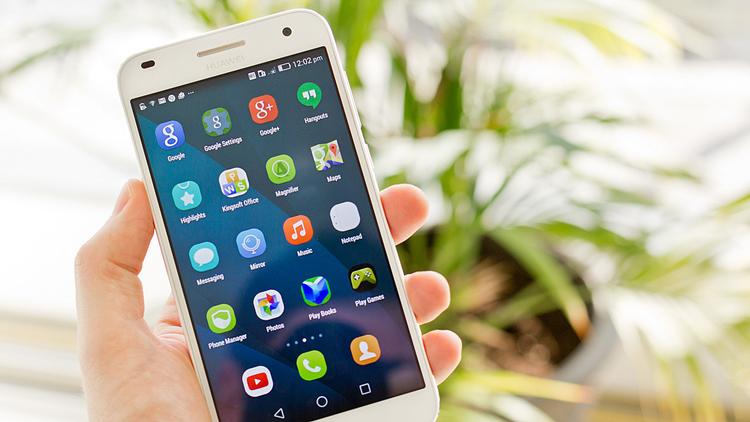 A good rule of thumb is to pretty much leave anything by Google alone. The exceptions are the various Google Play apps (Books, Movies & TV, Games, Newsstand, and Music) all of which can be stopped without causing any disruption to your system. Android protects itself quite well, so even if you do try to stop something essential from running your device will overrule you if it’s results would end in catastrophe. Good to know.

The sad truth is that if an app is determined to run and auto launch it can be quite a challenge to bring it to heel. Nevertheless we’ll investigate the options open to you below.

If you’re noticing performance issues with your device then it’s a good idea to see what apps are running. Finding this out is a little different depending on the version of Android you’re using. If you’ve upgraded to Marshmallow (Android 6.0.1) then you’ll need to enable the developer mode before you can access the information.

To do so go to Settings>About Phone then tap the Build Number section repeatedly until you see the ‘You are now a Developer!’ message appear. Now when you go back to Settings you’ll see a new Developer options section has appeared. 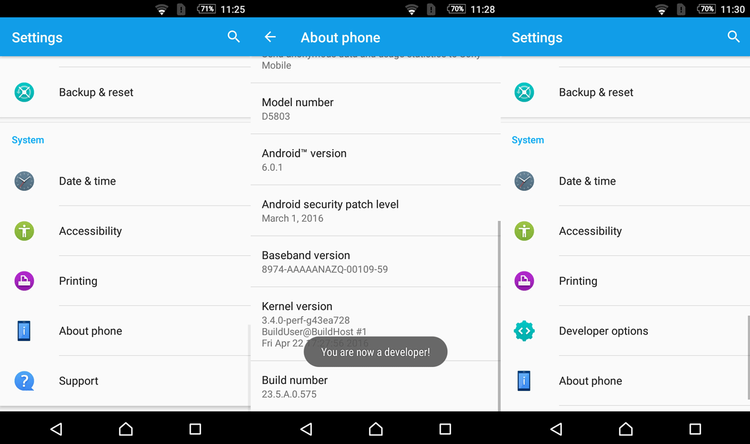 Select Developer options>Running services and you’ll be presented with a breakdown of the apps that are currently active, how long they’ve been running, and the impact they have on your system.

Choose one and you’ll be given the option to Stop or Report the app. Tap Stop and this should close the software down. In some cases you will need to tap Stop for a few different processes within the app, but after you’ve done this the program should close safely. 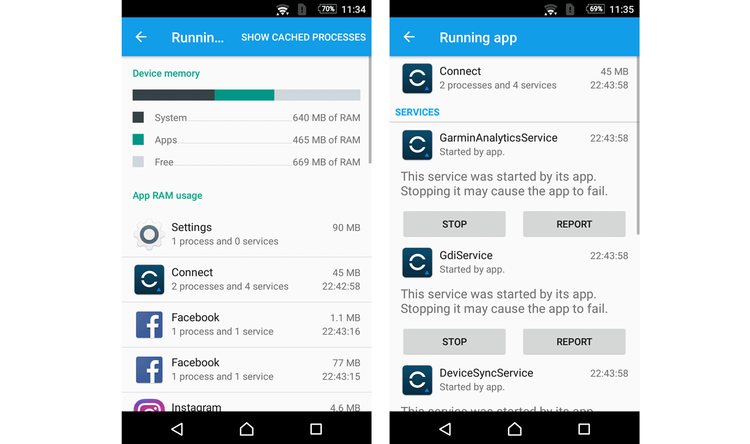 Of course, as Stephen King once wisely wrote, sometimes they come back. So it’s a good idea to keep checking this section to ensure that the app hasn’t automatically reappeared. If it has then it might be worth considering uninstalling the app if it isn’t essential, as preventing determined apps from relaunching can be difficult.

How to stop Android apps starting automatically: The Doze feature

One thing that Android Marshmallow does to minimise the impact of background apps is the Doze feature. This essentially freezes apps from running when the phone is in your pocket, on your desk, in your bag, or basically whenever it’s not plugged in and the screen is off.

To check if your rogue apps have the Doze feature enabled go to Settings>Battery> then tap the three dots in the upper right hand corner. Options will appear that include Battery Saver and Battery Optimization. Choose the latter and you’ll see a list of the apps that haven’t been optimised. If you see the misbehaving app in the list tap it, select the Optimize option and tap Done. Now Android should manage the app more firmly throughout the day. 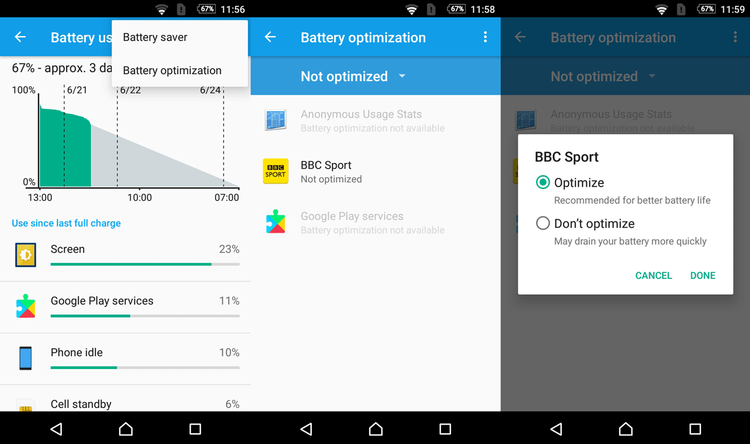 Other than these settings, there isn’t a lot you can do to stop apps loading automatically unless you employ a third party solution task killer. We don’t really think these are the best idea, as they work against Android in many ways. In truth, if an app isn’t respecting your wishes we’d advise uninstalling it and finding a more trustworthy alternative. There are plenty out there.

How to stop Android apps starting automatically: If you’re running an older version of Android

Those on 4.0 or higher have a couple of different options when it comes to killing apps. To see which ones are sucking your resources dry go to Settings>Apps then swipe the list over to the Running section. If you see the app there simply select it and then hit the Force Stop button to kill it. The same thing can be achieved from the Home screen by tapping the Recent Apps button (the square usually to the right of the Home button) then swiping away the app in question.

Of course neither of these will prevent an app from relaunching itself, which means if you really want the app to stay on your phone you’re going to have to use a third party Task manager.

We’re not huge fans of task killer/manager apps on Android, for the reasons we explained above, but if you positively have to have an app on your system that won’t behave, these are probably your best bet. Some of the most popular around are Greenify, Purify, and Doze all of which work in a similar way to the Android Marshmallow Doze feature that suspends app activity when the device isn’t in use. There are a number of extra features available on each app, but these usually require root access, which is a whole rabbit hole of its own. 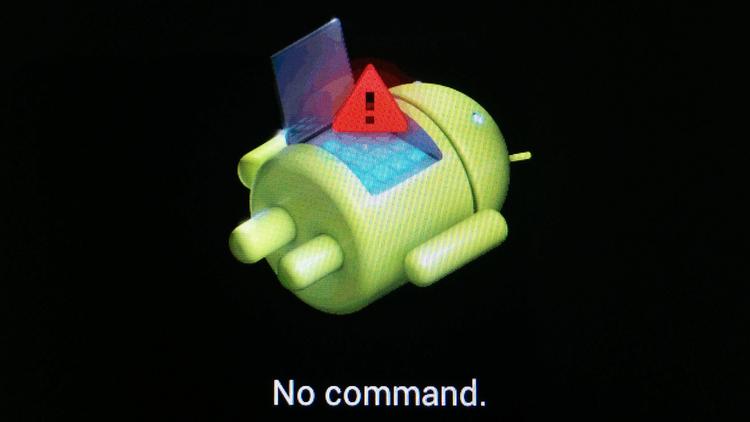 Rooting your handset does give you a far deeper level of control over the device, but this is not without its risks. For the majority of users we’d advise against it, but if you’re confident in your technical ability and really want to micromanage your device then you can follow out guide on How to Root your Android Smartphone.

Hopefully a mixture of these solutions will have your phone back to its top performance in no time. Of course if you’re looking for an excuse to buy a new shiny model instead, well, there’s never been a better time to invest in an Android phone, as our guide to the 20 Best Android Smartphones 2016 proves.