During Sony’s 2016 E3 PlayStation conference, a brand new game was revealed: Days Gone. While it might look like any other zombie game on the surface, huge hordes and multiple ways to play mean that Days Gone offers something slightly different for PS4 players.

Following a handful of delays, Days Gone is finally available to play on PS4. Here’s everything you need to know, from the best deals to gameplay details and the latest trailers.

Sony originally claimed that Days Gone would be released in the first half of 2018, but, like most first-party games, it was delayed – several times in fact. Thankfully, the game is now available worldwide following a 26 April 2019 release date.

You can pick up Days Gone from various retailers including the PlayStation Store (£54.99) and  Amazon (£58.49), although UK fans can pick it up cheaper from  GAME at £49.99. Those in the US can choose between the PlayStation Store,  Amazon and Walmart, where it’ll set you back $59.99 regardless of where you buy.

And in case you skipped past the intro and didn’t already know, it’s ONLY available on PS4 (and PS4 Pro).

Days Gone is set in the post-apocalyptic Pacific Northwest. It’s probably easiest to think of it as the game you’d get if you crossed The Last of Us with Sons of Anarchy, since the main protagonist, Deacon St. John, is a biker. 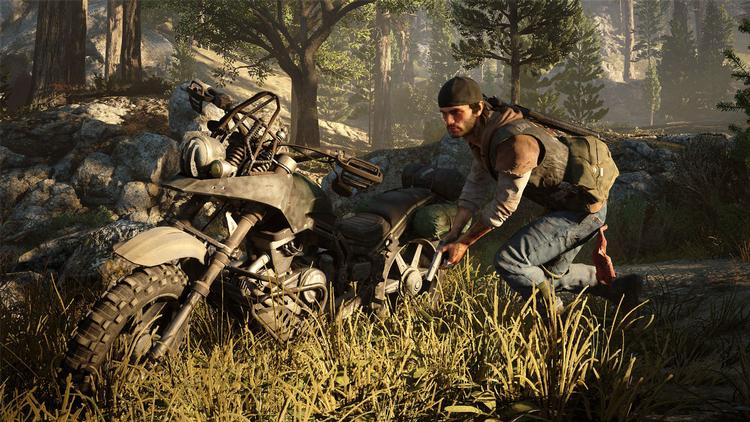 The story takes place two years after a “global pandemic has killed almost everyone, but transformed millions of others into what survivors call Freakers”. A bit like zombies, but not – they’re feral, more animal than human, alive and “quickly evolving”.

But, according to director John Garvin, freakers aren’t the only things you need to worry about; less-than-friendly humans will also cross your path throughout the game. In fact, Garvin claims that humans play a significant role in the game, whether friend or foe. It could be a similar implementation to that of State of Decay 2, where you can opt to help other survivors you come across, or leave them and make an enemy of them.

What we do know is that there will be Rippers – humans that worship Freakers – roaming the open world, attacking any survivors they come across. You’ll also come across camps of Rippers on your travels and, as they worship Freakers, they won’t fight back if you *ahem* lead a horde into their camp.

Aside from Ripper camps, there will be towns and cities full of human settlements, including a city of over 800 residents – though Garvin didn’t go into detail about whether all 800 NPCs will be in the game, or whether it’s lore, but the huge hordes of zombies seen in gameplay trailers make us think it might be the latter.

Garvin also revealed that there are no difficulty options, and there will be no “easy mode” – an interesting approach to a single-player game and something not seen very often in gaming. “The game itself is already pretty hard,” said Garvin. “It’s not very good when it’s easy. It’s a way more exciting game [when it’s hard], it’s a lot of fun, and kind of speaks to the fantasy of the apocalypse by being a challenge. We give too much away for free by having an easy mode”.

While it’s an interesting move that’ll put all players on a level playing field, not all players will be die-hard gamers – some may want to play the game for the story, and if they find it too hard, they may stop playing altogether.

In terms of length, it’ll apparently take over 30 hours to complete the campaign, and you’ll be able to keep playing once you’re done. PS4 Pro users can look forward to 4K@30fps support via checkerboard.

The open-world nature of the game is exciting enough, but the gameplay demo video below also shows how you’ll be able to set traps and craft – as well as the ability to play in different ways to achieve the same end goal.

The original demo below shows two types of Freaks: Newts and Hordes. The former were young when infected and are “opportunistic hunters” while the latter are large groups which eat, move and attack as one.

At E3 2017, a seven-minute gameplay walkthrough gave a much better idea of what it’s like to move through the world and use items tactically:

Then, in the run-up to E3 2018, Sony released a new trailer giving us a better look at some of our allies and enemies in Days Gone, along with confirming the 2019 release date.

The most recent Days Gone trailer was released in January 2019, and gives us a more in-depth look at the open world that the game is set in.