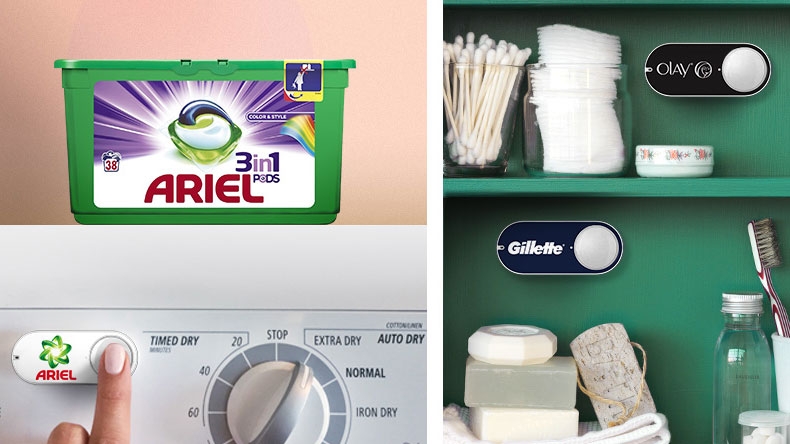 Amazon’s Dash Buttons arrived in the UK in 2016, with 100 buttons available by October 2017. Now, Amazon has launched Virtual Dash Buttons to make life even easier. Here, we explain what are Amazon Dash Buttons, and bring you everything you need to know about using them.

What are Amazon Dash Buttons?

There are more than 100 Dash Buttons available in the UK. Each little device will cost you £4.99, but that £4.99 will subsequently be taken off your first order so they’re essentially free.

The buttons are connected to the internet, and once they’re set up with your Amazon shopping account via the app you simply press the button to place your order.

WIthin the app you select exactly which product you want the button to buy from that brand. You can also set order limits and the price difference allowable – prices change all the time.

Your order should arrive within 24 hours for Prime members, and any further button presses before your order is delivered will be ignored.

You’ll also get a notification to tell you that your order has been placed, how much it cost and when you can expect it to arrive, which will also allow you to cancel or adjust the order if it was a mistake.

The idea is that you’ll never need to worry about running out of everyday essentials again. You can get toilet paper from Andrex, razors from Gillette, nappies from Huggies and even condoms from Durex. For kids there’s NERF and PLAY-DOH too.

As of January, Amazon has introduced Virtual Dash Buttons. They do the same thing as the physical ones, described above, but instead of buying them and having them around your house, you can add them as shortcuts on the Amazon mobile app and website. You can find out more about Virtual Dash Buttons and how to get them here.

In addition to Amazon’s Dash Buttons, the Amazon Dash Replenishment Service is now available to device makers, allowing them to build automatic reordering tools into their products. This could be a printer that orders ink when it detects that it is running out, for example. Amazon is already working with the likes of Samsung, Whirlpool, Bosch and more on this technology.

In July 2016, Amazon announced a little device called Amazon Dash, which is basically a smart barcode reader. The company says it’s a quick and easy way to place grocery orders on its AmazonFresh service.

Amazon Fresh UK: What is AmazonFresh?

Amazon is taking on yet another industry with its latest UK service called AmazonFresh. It’s a direct move against supermarkets, but right now there aren’t many people who can use it. We look into exactly what is AmazonFresh, who can get AmazonFresh and how much AmazonFresh costs.

On 9 June 2017, Amazon.co.uk launched a new service called AmazonFresh for select areas of London in the UK (for now). The service allows those in the initial catchment area to order groceries from a massive range of locally sourced products from around London. Amazon promises ‘fast and flexible delivery’ and is a clear move to compete in yet another retail space in an attempt to wrestle some ground from the food delivery services of Tesco and Ocado.

Tellingly and cleverly for Amazon, it will exploit its existing relationship with Morrisons to offer the latter’s products over those of other supermarkets.

Where does AmazonFresh deliver?

AmazonFresh currently delivers to 69 Central and East London postcodes. As with many of Amazon’s new services, this is a trial run of a service that has expanded greatly in the US, so we expect it won’t be long before other areas of the country get the service.

To check if you are eligible for the services, click here and follow the instructions, or check out the map below of the initial areas.

What does AmazonFresh deliver?

There are a whole host of foods you can purchase on AmazonFresh, with enough range to conceive doing your whole food shop on it. From dairy to deli, meat to breakfast food, the service means you can order as little or as much as you like with the same delivery options.

Check the range out here.

How do I get AmazonFresh?

If you are in the catchment area, you are eligible. Unfortunately this means it is a London-only service at the moment, but as with services such as Amazon Prime, we expect the reach of it to increase massively very soon.

AmazonFresh is available to existing Amazon Prime members. Prime is a membership that allows people to use many of the company’s different services. For a full explanation, here’s our Amazon Prime round up.

How much does AmazonFresh cost?

The necessary Amazon Prime membership in order to use AmazonFresh costs £79 per year – click here to view the benefits and sign up for a free 30-day trial of Amazon Prime.

It is notable however that you not only have to sign up to Prime, but also pay an additional £6.99 monthly fee on top of that. This gets you unlimited free orders of shops over £40 in total. If this seems like a lot to pay, you may be right – however if you already have Prime and want your food to come from the same company, it represents a good deal.

AmazonFresh and Amazon Pantry: What is the difference?

Amazon already has a service called Amazon Pantry, which is confusingly slightly different. Amazon Pantry allows you to fill a box for a flat rate of £2.99 with any good eligible – the range is different to that offered by AmazonFresh.

Every subsequent box you order is 99p. It’s great if you’re a Prime member in an area that’s served and need a few bits and pieces delivered fast.