For the first time, the specifications and architecture of these chips are basically identical on both desktop and laptops. This brings a whole new meaning to mobile gaming, especially since a GTX 1060-equipped laptop can now run a VR headset such as the HTC Vive.

You can buy a 1080 Ti for £689.99 from Overclockers UK, although that’s the cheapest card. The most expensive is over £800. The Founders Edition costs £739.99, although it’s supposed to cost £699 according to Nvidia, or $699 in the US. Boards from partners including ASUS, EVGA, Gainward, Galaxy, Gigabyte, iGame, Innovision 3D, MSI, Palit, PNY and Zotac are also available. Nvidia says that overclocked editions will run at up to 2GHz (the standard boost clock is 1.6GHz).

Cards are now on sale, and you can buy them in shops and online.

What are the GTX 1080 Ti specifications?

These are the official prices, but they will vary depending on the retailer and third-party manufacturer.

You can purchase the GTX 1060 from various retailers in the UK: Overclockers UK, Box.co.uk, Scan and  Ebuyer. You can also order it directly from Nvidia’s website. You’ll also be able to find the laptop equivalent through system builders, including Acer, Alienware, ASUS, Clevo, EVGA, Gigabyte, HP, Lenovo, MSI, Origin, Razer, Sager and XMG.

Nvidia confirmed that the AMD RX 480 is a direct competitor, so it comes as no surprise to see competitive pricing. Also see: AMD RX 480, 470, 460 UK release date, price, features and specification.

What are the GTX 1060 specifications?

The GTX 1060 does not support SLI. Nvidia says it isn’t relevant for mid-range cards, and that it concentrated on producing the best single GPU card for the money.

Apart from being cheaper, the new 3GB model is available from some partners as a shortened card, around 175mm in length, which makes it suitable for smaller PC cases that don’t have the space for a full-length graphics card.

As with the 1080 and 1070, the 1060 supports Ansel for in-game screenshots, and also simultaneous multi-projection. On 14 July, the first game supporting the Ansel technology was Mirror’s Edge: Catalyst, whilst there are many more planned for the future.

The GTX 1070 is available with UK pricing officially announced. The Founders Edition costing £399, but you can find it online for £374.99.

You can purchase the GTX 1070 from various retailers in the UK: Overclockers UK, Amazon, Scan and  Ebuyer. You can also order it directly from Nvidia’s website. You’ll also be able to find the laptop equivalent through system builders, including Acer, Alienware, ASUS, Clevo, EVGA, Gigabyte, HP, Lenovo, MSI, Origin, Razer, Sager and XMG.

In the US the GTX 1070 can be found on Amazon US, newegg, MSI,  Gigabyte and through other manufacturers’ websites. It can also be found through Nvidia’s website for $449.

What are the GTX 1070 specifications?

In the UK, you can order the GTX 1080 through a variety of UK retailers. Here’s a few suggestions on where to buy the new GPU:  Overclockers UK,  Ebuyer, Scan, Amazon, Maplin and Currys. You’ll also be able to find the laptop equivalent through system builders, including Acer, Alienware, ASUS, Clevo, EVGA, Gigabyte, HP, Lenovo, MSI, Origin, Razer, Sager and XMG.

In the US the GTX 1080 can be found for sale on Amazon US,  newegg, MSI,  EVGA, Gigabyte and through other manufacturers’ websites.

What are the GTX 1080 specifications?

With that said the GTX 1080 and GTX 1070 both beat their predecessors and the GTX 1060 comfortably and even knock the 2015 Titan X off its throne – an impressive performance gain.

Despite its high price, the GTX 1080 might still prove to be a fantastic value for money card for high-performance VR, given its better architecture over Maxwell cards, we see it being the king of VR.

That’s not to say the GTX 1070 and 1060 aren’t capable of VR, quite the opposite. However, if you’re serious about VR, you’ll want to get the very best graphics card in order to enjoy it at its fullest. 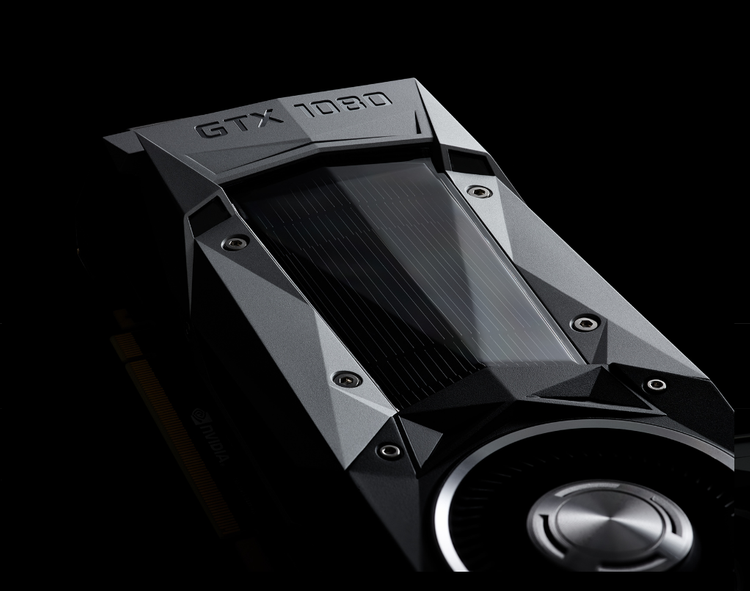 The GTX 1080 & 1070 run on Nvidia’s new Pascal GP104 architecture, both of which have stunning performance gains over previous generation Nvidia cards. The GTX 1060 runs on a GP104 variant, codenamed GP106. The GP106 card will still run on the Pascal 16nm FinFET architecture, but is aimed at those looking for single-monitor 1080P gaming performance.

The GTX 1080 is faster than SLI GeForce GTX 980s – that’s two once-flagship GPUs being outpaced by a single GTX 1080. For enthusiasts running 4K screens, it was often the case of choosing SLI 980s over a single Titan X, which on its own is a ridiculously powerful graphics card. This makes the GTX 1080 the single best graphics card on the market for gamers, with the GTX 1070 closely following it.

The GTX 1060 is aimed to compete with the AMD RX 480 and rightfully does. Through benchmarks found online, it’s clear to see that the GTX 1060 competes well with the RX 480 and often outpunches the GTX 980 – impressive!

Given the card’s specifications and pricing, it will be interesting to see how well the GTX 160 does versus the AMD RX 480, as both are similarly priced.

The Pascal architecture brings both performance gains and excellent power efficiency (as shown in Nvidia’s graph below). This is fully reflected in the mobility versions of the cards, with the graphics cards being able to provide high framerate in a confined, power-deprived space. 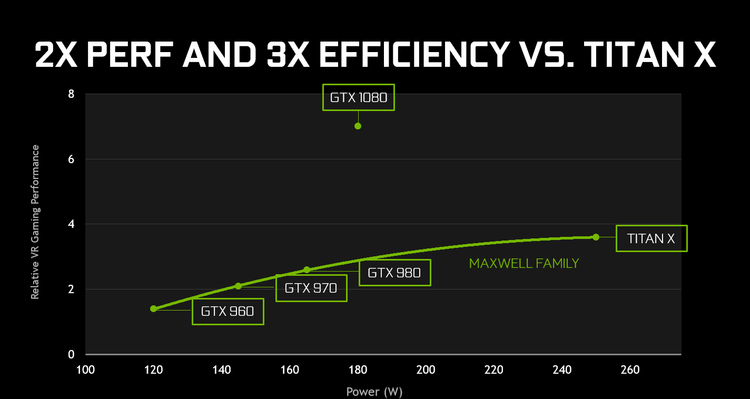 There was a big push during the launch event about virtual reality. VR has grown in popularity among gamers and tech enthusiast; it therefore comes as no surprise that Nvidia’s event talked about the integration of the new GPUs within a virtual reality environment. Read our review of the HTC Vive (a VR headset).

Nvidia’s VRWorks Audio, a tool for developers and eventually consumers is therefore a good leap for those wanting to venture into the world of VR.  Nvidia’s VR Funhouse was launched on 14 July to make it the company’s first game that will be made available on Steam. The game is free to download and allows you to play fun arcade games in VR, where you’ll get special effects through the use of PhysX, Hairworks, Flow, FleX and Destruction – various technologies used to aid your visual experience.

There is also a new game-centric photography tool called  Nvidia Ansel. The tool provides a way of editing and viewing different angles of your in-game screenshot. It even has the ability to take full 360 VR screenshots – an exciting prospect for a selection of games which will have full support for Ansel.

Nvidia has also released Ansel support on Mirror’s Edge: Catalyst. You can therefore now take full 360 screenshots of the game and view them on your PC, smartphone or VR headset. Ansel also hosts a large array of editing tools for those in-game screenshots.

All of the above features are those showcased alongside the graphics cards, and provide a healthy step forward for current-gen Nvidia GPU owners.

See also:  How to build a gaming PC. 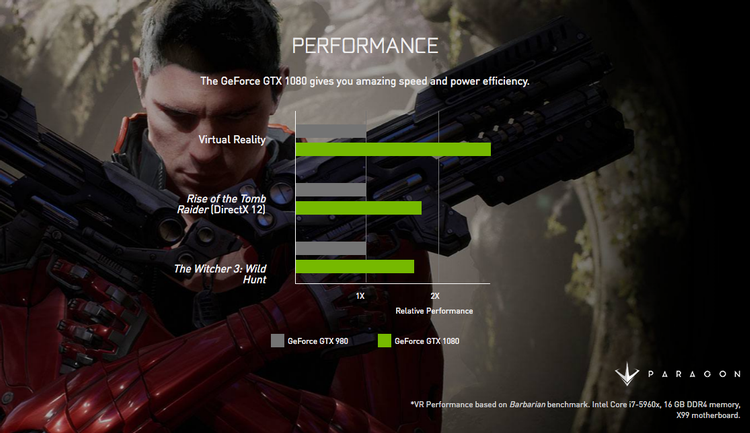 The added VRAM on both GTX 1070 and 1080 GPUs will be a welcome addition to those running intensive games on high-resolutions, such as 4K or multi-monitor setups.

For developers, a GTX Titan X might still be the best option, given its larger VRAM capacity and high CUDA count. As for raw performance, given the raw core and boost clock of the GTX 1070 and 1080, it’s a simple decision for gamers to choose the newer Pascal graphics cards.

The GTX 1060 on the other hand is aimed at those wanting a good single-monitor 1080P gaming performance and a solid 1440P single-monitor experience. Its specs sit between the GTX 980 Ti and GTX 980.

However, it should be noted that the GTX 1070 & GTX 1060 use GDDR5 memory, but the GTX 1080 uses the new GGDR5X memory, which performs a third faster than the older generation memory modules. 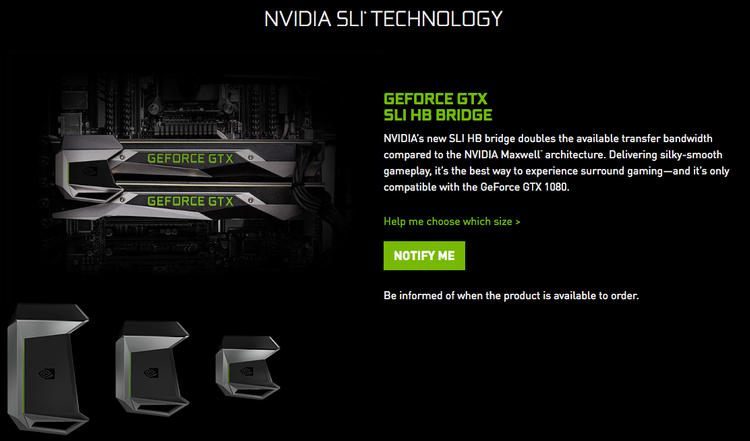 Nvidia also announced a new SLI HB Bridge, which, is claimed to double the available transfer bandwidth compared to Maxwell GPUs – could we see an end to micro-stuttering?

Finally, those who like overclocking their GPUs will be extremely pleased to know that the headroom that the GTX 1080 offers is huge. Nvidia showcased their GTX 1080 running on a ridiculous 2114MHz, a massive stock overclock over the 1607MHz core clock and 1733MHz boost clock! Better still, it was running well below its thermal threshold and was pictured at 67 degrees Celsius. See also: How to upgrade your graphics card.