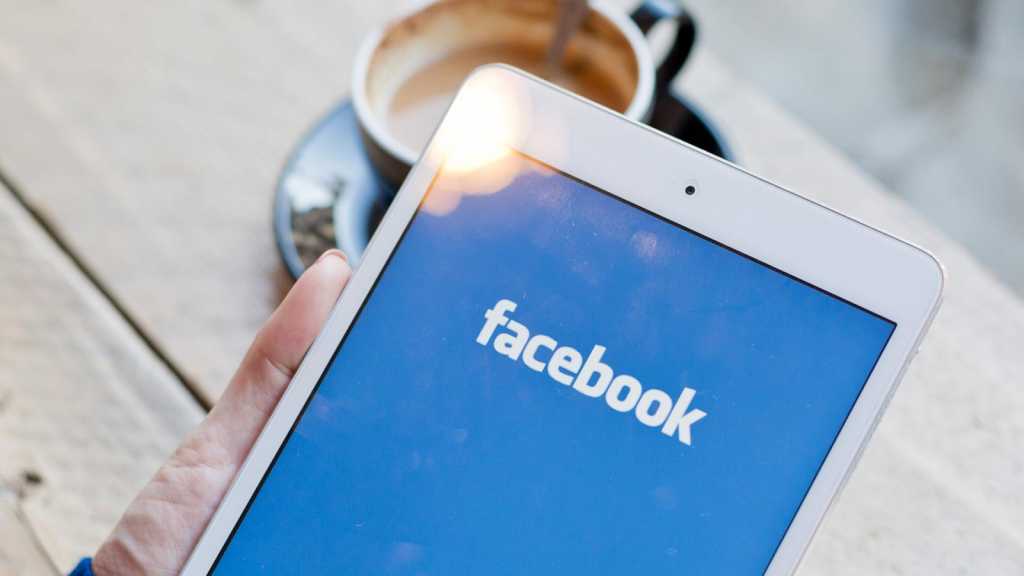 All it takes is for one person to fall victim to a hoax on Facebook and they spread like wildfire through the social network. Many people when quizzed will say they knew it wasn’t true, but they thought they had better share it just in case. (Which makes no sense whatsoever.) We round up some of the more common scams found on Facebook so you know what not to share.

Facebook scams usually focus on the idea that Facebook is either going to start charging users, or that Facebook’s privacy options are changing. By copying and pasting a status you can somehow protect yourself from either having to pay a fee or losing the rights to any of your stuff saved on the network.

Exactly why people start spreading these scams isn’t clear, but there is one thing we can guarantee: they are all absolute rubbish and you can safely ignore them. Certainly do not share them, which does nothing other than keep the rumour alive and allow people to falsely believe they are protected.

It’s only natural that users will flock to social media to learn all about the new Royal baby. But wherever there is an audience there is a scammer, and they’re already cashing in on Baby Sussex.

Komando.com reports that fraudsters are tricking users into clicking on dodgy links with the promise of exclusive footage of the newborn, but really are downloading to your machine a virus that will steal your personal data and share the post again via their now compromised account.

This is why it pays to be extremely careful what you click on and what you share – keep your wits about you, even while going all gooey-eyed over the new baby.

We’ve outlined this one in more detail here, but in essence this is more of a confused message than a proper hoax as there is actually some truth to it.

In January 2019 Facebook is updating its policy on group membership, requiring users who are invited to a group by a friend to physically accept that invitation or to at very least visit that group’s page if they wish to retain their membership. If they do not they will be automatically removed.

Find out  how to use the off-Facebook tool.

However, the message has been confused, with some admins prompting users to post on their group’s page, or to comment on or like an existing post, warning that they will be removed if they are inactive. This is not necessary.

The new policy is actually good news for those users who are frustrated with friends automatically adding them to pages against their will. Facebook is merely moving from an opt-out- to an opt-in policy for groups.

Strangers are following you

This is an odd hoax doing the rounds, and one we think comes from a misunderstanding rather than anything malicious.

Facebook allows users to follow people who they aren’t friends with, yet all they can see is any information posted on their profile with the public setting.

However, we’ve seen the following message appearing on Facebook: “Learned something that was rather disturbing tonight. Time to tighten up security on your Facebook profiles!! I just blocked about 20 foreign people from following my profile and I thought I was already locked down! If you go to Account Settings > Blocking > Block Users and type in “following me”, without the quotes, you may possibly see a bunch of people following you that you don’t know Block each one and confirm!”

If you follow those steps you will indeed find a list of people you don’t know. As will everyone else who tries – in fact they will see the same list of people you do. They aren’t really following you at all. In fact, there is something in their profile – be it a nickname or a liked page or whatever – that causes them to appear under this search. 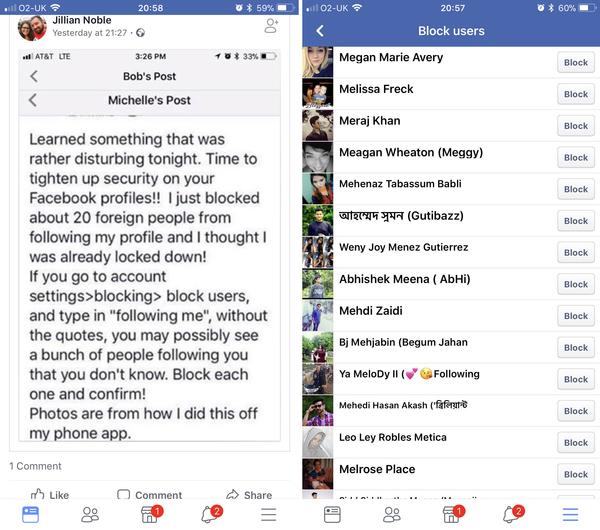 Back in November 2012 when these hoax posts first began doing the rounds, the company stated: “There is a rumour circulating that Facebook is making a change related to ownership of users’ information or the content they post to the site. This is false. Anyone who uses Facebook owns and controls the content and information they post, as stated in our terms. They control how that content and information is shared. That is our policy, and it always has been. Click here to learn more: facebook.com/policies.”

It’s important to note that any terms and conditions to which you are bound were explained when you signed up to Facebook. Facebook can’t change the terms without telling you, and posting a status update won’t protect you from those you’ve already agreed to – if you don’t like its terms (the actual terms, not the rumoured ones) then deactivate your account and stop using the social network.

Don’t accept a friend request from this known hacker

We’ve seen a few messages shared via Facebook Messenger warning users not to accept friend requests from known hackers or their account will be compromised and so will that of all their friends. It’s nonsense, but it does do some good in reminding people that they shouldn’t be accepting friend requests from people they don’t know.

Here’s the full text: “Please tell all the contacts in your messenger list not to accept Jayden K. Smith friendship request. He is a hacker and has the system connected to your Facebook account. If one of your contacts accepts it, you will also be hacked, so make sure that all your friends know it. Thanks. Forwarded as received. Hold your finger down on the message. At the bottom in the middle it will say forward. Hit that then click on the names of those in your list and it will send to them.”

“Now it’s official! It has been published in the media. Facebook has just released the entry price: £5.99 to keep the subscription of your status to be set to “private”. If you paste this message on your page, it will be offered free (I said paste not share) if not tomorrow, all your posts can become public. Even the messages that have been deleted or the photos not allowed. After all, it does not cost anything for a simple copy and paste.”

This particular rumour first appeared on Facebook in 2013, and went viral in September. We’re still waiting for Facebook to start charging £5.99. We’ll be waiting a long time for it to do so because, apart from anything else, it is not in the business of alienating its users.

There are some other variations on the theme doing the rounds as well, such as this one:

“Oh Dear Some PEOPLE COULD BE IN TROUBLE Everything you’ve ever posted becomes public from tomorrow. Even messages that have been deleted or the photos not allowed. It costs nothing for a simple copy and paste, better safe than sorry. Channel 13 News talked about the change in Facebook’s privacy policy. I do not give Facebook or any entities associated with Facebook permission to use my pictures, information, messages or posts, both past and future. With this statement, I give notice to Facebook it is strictly forbidden to disclose, copy, distribute, or take any other action against me based on this profile and/or its contents. The content of this profile is private and confidential information. The violation of privacy can be punished by law (UCC 1-308- 1 1 308-103 and the Rome Statute). NOTE: Facebook is now a public entity. All members must post a note like this. If you prefer, you can copy and paste this version. If you do not publish a statement at least once it will be tactically allowing the use of your photos, as well as the information contained in the profile status updates. DO NOT SHARE. Copy and paste to be on the safe side.”

The idea that simply copying and pasting a message would protect you from such a change is frankly ridiculous, never mind the fact Facebook would be in seriously hot water if it decided to open up its users’ private data for all to see.

As of January 4th, 2015 at 5pm Central standard time. I do NOT give Facebook, or any entities associated with Facebook, permission to use my pictures, information, or posts, both past and future. By this statement I give notice to Facebook that it is strictly forbidden to disclose, copy, distribute, or take any other action against me based on this profile is private and confidential information. The violation of privacy can be punished by law (UCC 1-308-11 308-103 and Rome statute). NOTE: Facebook is now a public entity. All members must post a note like this. If you prefer, you can copy and paste this version. If you do not publish this statement at least once it will be tactically allowing the use of your photos, as well as information contained in the profile status updates. DO NOT SHARE. You MUST copy and paste to make this your status. I will leave a comment so it will be easier to copy and paste!!!

“In response to the new Facebook guidelines I hereby declare that my copyright is attached to all of my personal details, illustrations, comics, paintings, professional photos and videos, etc (as a result of the Berner Convention). For commercial use of the above my written consent is needed at all times.”

“The content of this profile is private and confidential information. The violation of privacy can be punished by law (UCC 1-308- 1 1 308-103 and the Rome Statute). NOTE: Facebook is now a public entity. All members must post a note like this. If you prefer, you can copy and paste this version. If you do not publish a statement at least once it will be tactically allowing the use of your photos, as well as the information contained in the profile status updates. DO NOT SHARE. Copy and paste.”

A new type of scam doing the rounds works slightly differently to previous scams, spreading itself via direct messages from hijacked accounts rather than the News Feed.

Once an account is hijacked, the scammer will send a message to everyone in their Friends list with a link to what appears to be an image saved in .svg format. They are then taken to a site that looks like but is not YouTube, and instructed to download a browser add-on in order to watch a video.

This browser add-on is in fact malware, and can steal sensitive information such as account details, passwords and even banking information. It will also spread itself further to all the friends on your own list.

Should you see such a message on Facebook Messenger, don’t click on the link without confirmation from your friend that they intended to send it to you. If it wasn’t them, inform them that their account has been compromised and that they must change their password in Settings, General, Password.

While they’re at it they should also check the Recognised Devices and ‘Where you’re logged in’ options in Settings, Security, removing anything they don’t recognise here.

Using a mobile antivirus may also help you to avoid downloading malicious software.