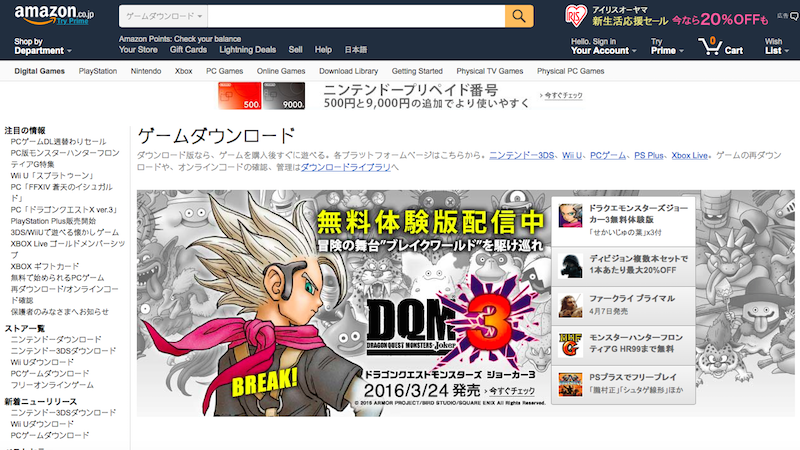 See also: The most anticipated games.

If you’re an early adopter and just can’t wait for a game to come out in Europe or the UK then you can now get hold of the title you’re after a lot easier. This is thanks to Amazon as the online retail giant has decide to start shipping some Japanese video games and consoles internationally.

Over at Amazon Japan, it’s been possible to buy items and ship them to the UK but video games and consoles have only been available to purchase like this recently.

How to buy and import Japanese video games and consoles

Although you’ve no doubt got an Amazon account, you’ll need to set a new one up for Amazon.jp. This is all pretty straight forward and when you first navigate to the site, you’ll want to click the ‘In English’ link under the search box in order to navigate and use the site – unless you’re fluent in Japanese.

Not everything will be shown in English so it can get tricky at times so use Google translate if you need to.

Amazon Japan doesn’t simply have every video game on every platform available to buy or pre-order with international shipping so you can import easily. You’ll need to look for items sold directly by Amazon.jp and ones which qualify for Amazon Global International Shipping – the price seems pretty reasonable, too. Products that aren’t available internationally will say “Sorry, we can’t deliver this item to your area” in their product description.

For your information, here is a list of Japanese-exclusive video games via Wikipedia.

One last note is that not all consoles support every region so don’t all work with Japanese imports. Those using a PS4, PS Vita or Xbox One will be fine but the Nintendo Wii U and 3DS are sadly region-locked so won’t play Japanese imports. You could always buy a Japanese console in order to play the imported games. Read: PS4 vs Xbox One.

Also be aware that since you’re buying a Japanese region game, there may not be an English language options or subtitles.