Though many expected a smartphone related announcement from Huawei at MWC 2016, the company launched its first 2-in-1 – the Huawei MateBook. Featuring a detachable keyboard and full Windows 10, the laptop/tablet hybrid looks to take on the likes of the Microsoft Surface Pro and the recently launched Surface Book. While it looks like an interesting product, the company is yet to announce any details regarding its UK pricing or when we’re likely to get our hands on one. Here, we detail the Huawei MateBook release date, price and specs in the UK and US. Read next: Huawei P9 release date, plus feature and spec rumours

It’s taken a while but we now know that the MateBook release date is 11 July but that’s in US – you can pre-order from the Microsoft Store now (the m7 models aren’t available to select). We’re still waiting on a UK release date and will let you know as soon as we have it.

There’s also still no work on a UK price but we do at least have the US and European pricing for reference. Bear in mind that the price is for the tablet only. See below to see how much extra the accessories cost.

Huawei’s MateBook looks to be a Microsoft Surface rival, offering a full Windows 10 experience on a tablet/laptop hybrid. Featuring an aluminium body and a 12in display with 84 percent screen-to-body ratio, it’s a pretty impressive device – in terms of design, anyway. It’s lightweight too, at 6.9mm and 640g (although it’s worth mentioning that’s without the keyboard attached) and will be available to buy in one of two combinations; white and gold, or moonshine grey and black.

The keyboard is securely fastened into place when attached to the display using a pogo pin connector, but the keyboard can be removed for a standard Windows 10 tablet experience. The keyboard is backlit with four levels of brightness, and features a full glass trackpad with click opposed to touch. Huawei claims it offers 14 percent more travel on keys than others on the market, but we’ve yet to confirm this.

There’s a downside to the keyboard though, as only a single viewing angle is available when in use – Huawei says this doesn’t matter because of the IPS technology used in the display, but we beg to differ. Different situations call for different angles, as the angle used when resting the MateBook on your lap will no doubt be different to that used when using the MateBook on a desk. 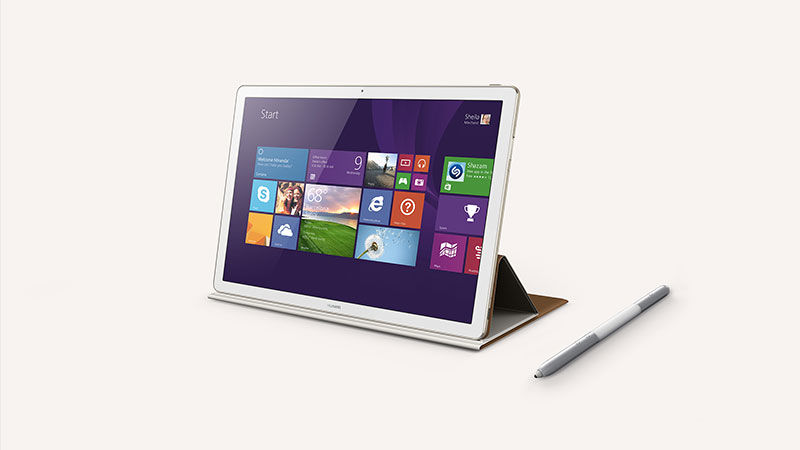 Apart from the pogo pin connector, the only other visible port on the MateBook is a micro USB-C port – there’s no home button, or Micro-USB available by default. It gives the MateBook a clean and simplistic design, and it’s not like Huawei isn’t offering connectivity, it just has a different idea of how to present it. Instead of cluttering the MateBook with various ports, Huawei has made an adaptor case to go along with it, which when plugged into the Micro USB-C port offers 2x USB ports, Ethernet, VGA, HDMI and a throughput USB-C port. It’s called the MateDock.

Along with the adaptor case comes a slot for the MatePen which is similar to that offered with the Microsoft Surface Pro series. The MatePen ($59) itself features 2048 pressure levels which Huawei calls “artist grade” and offers two buttons (eraser and action button) for ease of use, and even features a laser pointer for the (few) occasions where one is necessary.

The Huawei MateBook features a 12in touch-enabled IPS display with a pretty impressive resolution of 2160×1440. It’s fairly bright at 400nits, which should be helpful when trying to use the MateBook in bright conditions. The colour reproduction isn’t bad either, boasting 85 percent colour gamut (which Huawei claims is as close-to-life as possible) although we’ll be reviewing the quality of the display in more depth when we get a sample back to the PC Advisor towers. 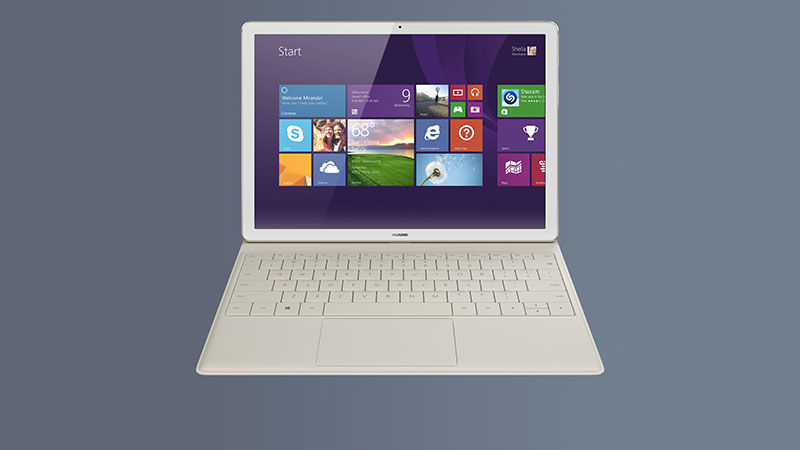 What about the internals? The MateBook features an Intel Core M processor (M3, M5 or M7 depending on the configuration) up to 3.1GHz, which allows the device to be fanless. It has a built-in heat shield with eight layers, which should help dissipate the heat generated over the aluminium body and provide decent battery life and performance. Along with the Intel Core M processor, you’ll find either 4 or 8GB of RAM and 128/256/512GB of storage, which should be plenty for browsing the web and running your favourite apps, although we’d leave the likes of Photoshop and video editing to more powerful machines.

In fact, Huawei claims that you’ll be able to get 10 hours of ‘work’ (editing documents, browsing the web) out of the MateBook before requiring a charge. If you’re only listening to music however, that battery life jumps up to a whopping 29 hours, although we can’t confirm this until we get a sample into the office. If the MateBook does run out of battery, Huawei says that it’ll recharge from 0 to 60 percent in only one hour.

Camera wise, the MateBook features a 5Mp front-facing camera for the likes of Skype and selfie-taking, but in an interesting move has decided not to feature a rear-facing camera. While tablets aren’t the best devices to take photos on, it’s still a feature of almost every tablet on the market at the moment – could this be the end of people taking photos on ridiculously big screens? We sure hope so.