New versions of Samsung’s mid-range Galaxy A3, A5 and A7 are on their way for 2017, taking several new features from the current flagship Galaxy S7, including the always-on display, waterproofing, improved cameras and increased storage. We outline the Samsung Galaxy A3 (2017), A5 (2017) and A7 (2017) release date, price and specifications. Also see: Galaxy A3 (2017) review

A UK release date has not yet been confirmed by Samsung. The company has said the phones will go on sale in Russia in early January, and then will be expanded to global markets.

Neither has Samsung confirmed official pricing for the Galaxy A series 2017, though our friends at MobileFun have confirmed that the Galaxy A3 will be available from £299 and the Galaxy A5 from £399. At a guess we’d estimate the Galaxy A7 to therefore cost around £499.

Both Galaxy A3 and A5 are available to pre-order now via the MobileFun website, though we suggest at these prices you also consider Samsung’s outgoing flagship Galaxy S7 (now £452 at Amazon) and the Galaxy S6 before it (£369 at Amazon).

If you wish to buy the Galaxy A3, A5 or A7 2017 on a contract, Vodafone and Three have already confirmed they will be stocking the handsets soon, and we expect the other UK mobile operators to follow suit. 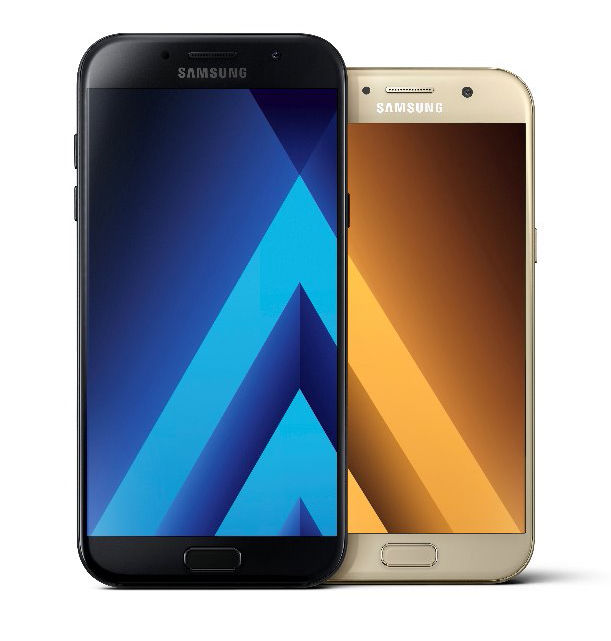 MobileFun will be among vendors stocking a range of accessories for the Galaxy A series 2017, including Galaxy A3 2017 cases and Galaxy A5 cases. These are available to pre-order now and should ship within two- to three weeks.

The following official accessories have been confirmed by MobileFun:

All three models feature a fingerprint scanner and the now-familiar metal frame with glass front and rear. The Galaxy A series will be available in Black Sky, Gold Sand, Blue Mist and Peach Cloud.

As in previous years, the key differences between the three Galaxy A-series models are their screen sizes and resolutions, battery capacity and performance.

The Galaxy A5 sits in the middle, and is expected to have similar performance (and battery life, given the smaller battery but also smaller screen) to the A7. Full specifications are provided in the comparison table below.