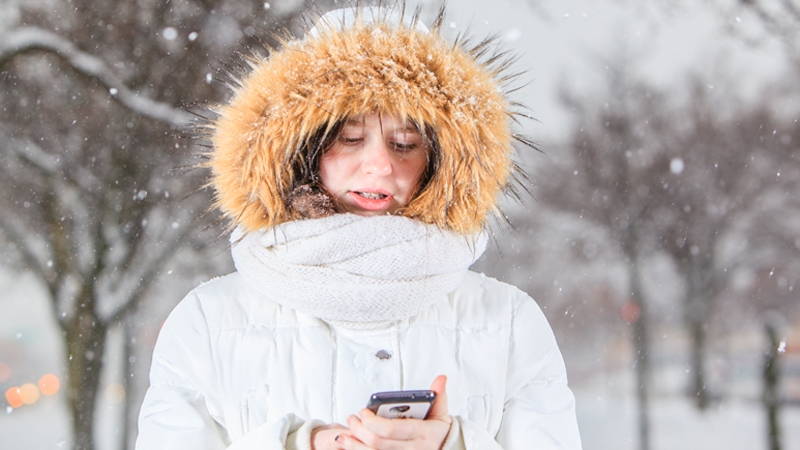 It’s freezing cold outside, and it’s important that you keep those closest to you warm and dry. No, not your partner, your child or your pet – you need to look after your smartphone. With some worrying that their phones are going to die as a result of the cold weather, we look at the effects of extreme temperatures on smartphone batteries. Can cold weather kill your phone?

We often see car batteries dying and needing a jump start to get them going again. Does this same principle apply for smartphones? Is there even a smartphone- defibrillator that exists? Let’s delve into the problematic dilemma.

Can cold weather kill your phone: Which battery do I have?

First of all, you need to know what type of battery is inside your phone. You’ll find specifications listed on its manufacturer’s website, or it may be written on the box it was sold in or on the battery itself, if you can access this.

Many consumer-grade batteries use rechargeable lithium-ion cells (also known as Li-ion battery or LIB). These come in a variety of sizes, but most smartphone batteries adopt a similar small and rectangular form. Lithium-polymer batteries are also used in some smartphones. Read next: Best power banks 2016.

Can cold weather kill your phone: How do lithium-ion batteries work?

If you’re interested in the science behind how batteries work,  Battery University offers lots of information. However, to briefly summarise, lithium-ion batteries work by moving ions between positive and negative electrodes in order to charge or to discharge.

The weather, or more precisely the temperature, can affect how these ions are transferred between the electrodes. If it gets really cold then they won’t move at all and the battery will not work

But the key point here is that it has to be really cold, and while there are places in the world that get that cold, the UK is not one of them. Here are the facts:

Can cold weather kill your phone: How cold is the UK?

Now if you don’t think you’ll be prone to extreme temperatures and by extreme we don’t mean a ‘North easterly breeze with the hint of showers’, then you should not panic, nor worry about your smartphone’s battery dying or even needing resuscitation.

Can cold weather kill your phone: How to maintain smartphone battery performance

The optimal battery-charge temperature for lithium-ion batteries is between 10°C and 30°C; while the optimal amount of charge with which you should store a battery is between 40- and 80 percent. Following this advice will ensure you prologue your battery life and in essence extend it over time.

It should be also noted that lithium-ion batteries do have a self-discharge rate. This can vary wildly between manufacturers, but is generally around 1.5-2% per month, again depending on the temperature.

Finally, the average lifetime of a battery is between 500- and 1000 cycles, where a cycle is measured as your battery depleting and being recharged.

We hope this guide has helped calm your nerves over the UK’s colder climate!