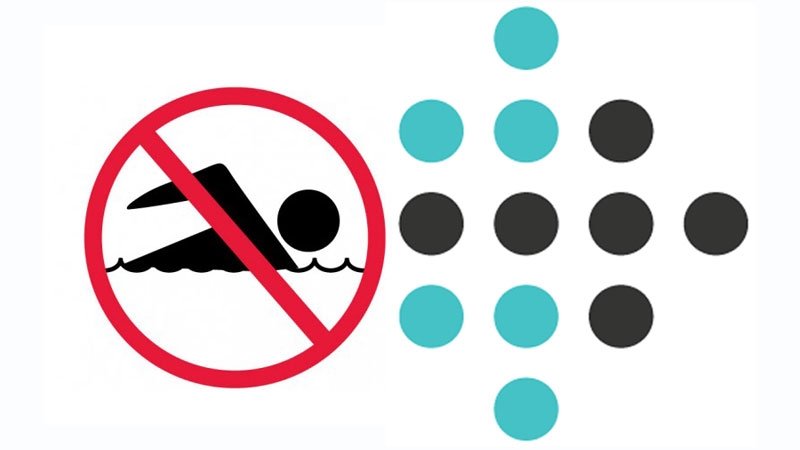 How waterproof are the Fitbit trackers? Can you wear a Fitbit in the shower, bath, or swimming pool? What happens when a Fitbit gets wet, and how do you dry it?

Fitness trackers are great for walking, running, and a wide range of sports, but swimming is not one of them for most trackers. See: Which Fitbit is best.

While there are fitness trackers that are waterproof – take a bow the Misfit Shine and Flash, plus Garmin Vivofit and VivoSmart, plus the Basic Peak, and Tom Tom Multi Sports GPS Watch – others can take a dive… or rather they can’t take a dive. So which activity tracker is best for swimmers? And well done for Apple making the S eries 2 Apple Watch waterproof, too.

Fitbit has now released a waterproof tracker, the Flex 2; read our Fitbit Flex 2 review for more details. This is swim proff up to 50 metres in depth, the equivalent of five Atmospheres (or 5 ATM). The Fitbit Surge is also rated as 5 ATM but Fitbit is adamant that it is not waterproof like the Flex 2.

Fitbit recommends you don’t go swimming with your Fitbit tracker, which “has been tested up to 1 ATM meaning it is sweat, rain and splash proof.”

The company says that, except for the Flex 2, its trackers are “not swim proof”, and also recommends taking it off before showering “because, as with any wearable device, it’s best for your skin if the band stays dry and clean.”

The Fitbits aren’t killed by a splash, and originally the company was happy if you wore it in the shower: “It should be able to brave all the elements of your everyday life ­– whether you’re in the shower or out in the rain,” it said about the Flex on its launch.

Fitbit now pointedly advises against showering with its trackers – even washing the dishes is not recommended.

When I owned the original Flex I thought nothing of wearing it in the shower or bath, and often swam 1,000m with it still on. The wristband did eventually start to degrade and rot, but the joy of the Flex was that you could buy new straps for it. That’s all sorted with the waterproof Flex 2.

The Charge 2, HR and Blaze wristbands are rated as 1 ATM (or atmosphere), meaning they should be able to be submerged in water up to 10 metres in depth. The Fitbit Surge is rated at 5 ATM, so it theoretically can be submerged to 50m depths, but again Fitbit says you shouldn’t swim or even shower in it.

We believe that Fitbit recommends taking its trackers off before even a shower because it’s worried about possible skin complaints if the wet rubber has a long contact with the skin – and not that it will break the tracker itself. The company had problems with its short-lived Force trackers due to allergic reactions to the band from some users, and had to withdraw the product> after just a few months. It does not want another scandal like that, so it’s playing safe – and so you probably should too.

Fitbit is keen to point out possible skin problems rather than damaged trackers: “It’s not good to keep a wet band on your skin for long periods of time. Be sure your skin is dry before you put your band back on.”

So a Fitbit can probably withstand the pressures of a relatively deep dive, but Fitbit won’t guarantee it will keep working afterwards.

What happens when a Fitbit gets wet

We had no problems swimming with the orginal Flex, apart from the eventual rubber degradtion mentioned above. I have also jumped into a swimming pool while wearing my Charge HR, and that worked fine – although I did get out of the pool fairly quickly when I realised my mistake.

So we would expect, but not guarantee, that a Fitbit trackers should be able to survive a shower or dip in the pool, but we wouldn’t recommend it if Fitbit says not to. Also, as the trackers won’t register your swimming efforts there’s little point taking it in the pool unless you don’t want to waste your step count to and from the changing room.

Prolonged wetness – such as leaving your Fitbit in a washing machine – might well lead to damage; see Fitbit’s drying tips below.

Drying out a wet Fitbit

Fitbit recommends that if its One, Zip or Ultra clip-on trackers get wet you should cover it in uncooked rice for 24 hours to extract the moisture from inside the device. We presume you should do the same if any of the other Fitbits gets drowned.

First off, get that Fitbit out of the water as fast as you can, and dry with a towel, or anything dry that will soak up as much of the dampness as possible. Fitbit says: “If your band gets wet – like after sweating or showering – rinse and dry it thoroughly before putting it back on your wrist.”

We’re not sure that rinsing is advisable if what you want to do is dry the thing! We think this refers to an overly sweaty rather than just wet tracker.

We don’t recommend you stick the tracker under a hairdryer if it’s set on hot. Try the rice trick for at least 24 hours.

And try to get rid of the moisture before connecting it to a power source for charging. Charging a wet device can do more harm than good.