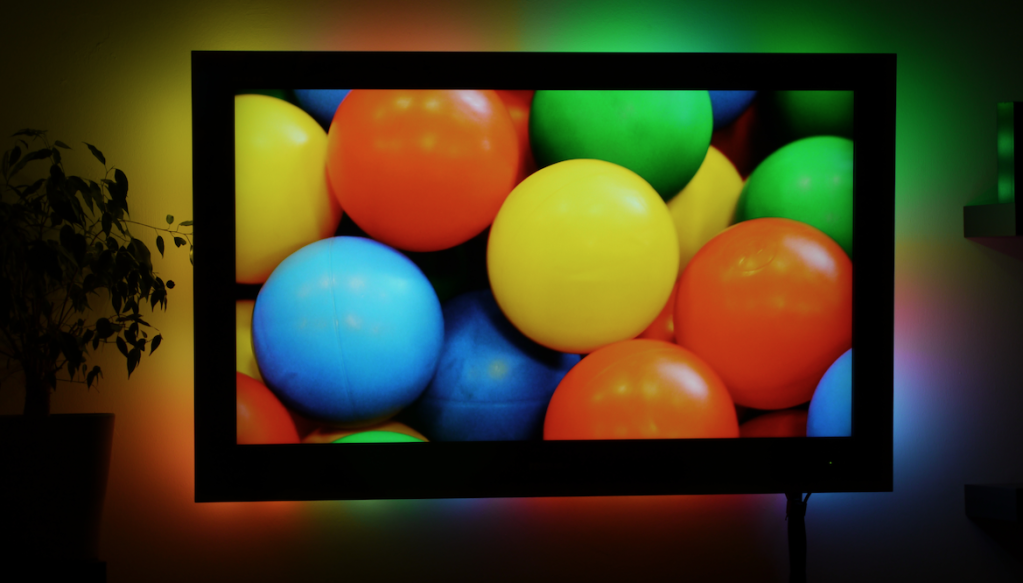 Philips’ Ambilight TV range offers LED lighting around the sides of the TV, creating the illusion that the image displayed on screen somehow carries on beyond the edges of the display. But what about if you don’t want to pay out for a new TV and want that on your existing TV? We’ve found a solution – Lightberry HD. But what is Lightberry HD, and how do you install it? Here, we review the Lightberry HD system as well as show you how to set up your own.

While UHD TVs are all the rage at the moment, there are companies working on far more exciting projects applicable to existing TVs. One notable company is Lightberry, a company that has enhanced the viewing and gaming experience through the use of colour LEDs, similar to the hugely popular Philips Ambilight system. The only difference is that this lighting system can be used with any TV, no matter the size, meaning you need not spend £100s on an Ambilight (or Ambilux coming soon!) TV when you’ve already got a decent TV.

In theory, the system is quite simple – using a Raspberry Pi as the brain, a HDMI cable runs from a HDMI splitter to the Lightberry HD kit, which analyses the outer edges of the image being outputted to your TV. The Lightberry HD then recreates the colour and brightness to match, with almost instant effect. The lights displayed around the edges of the TV provide an illusion of the image extending beyond the edges of your TV, while generally enhancing the general ambience of the room too. 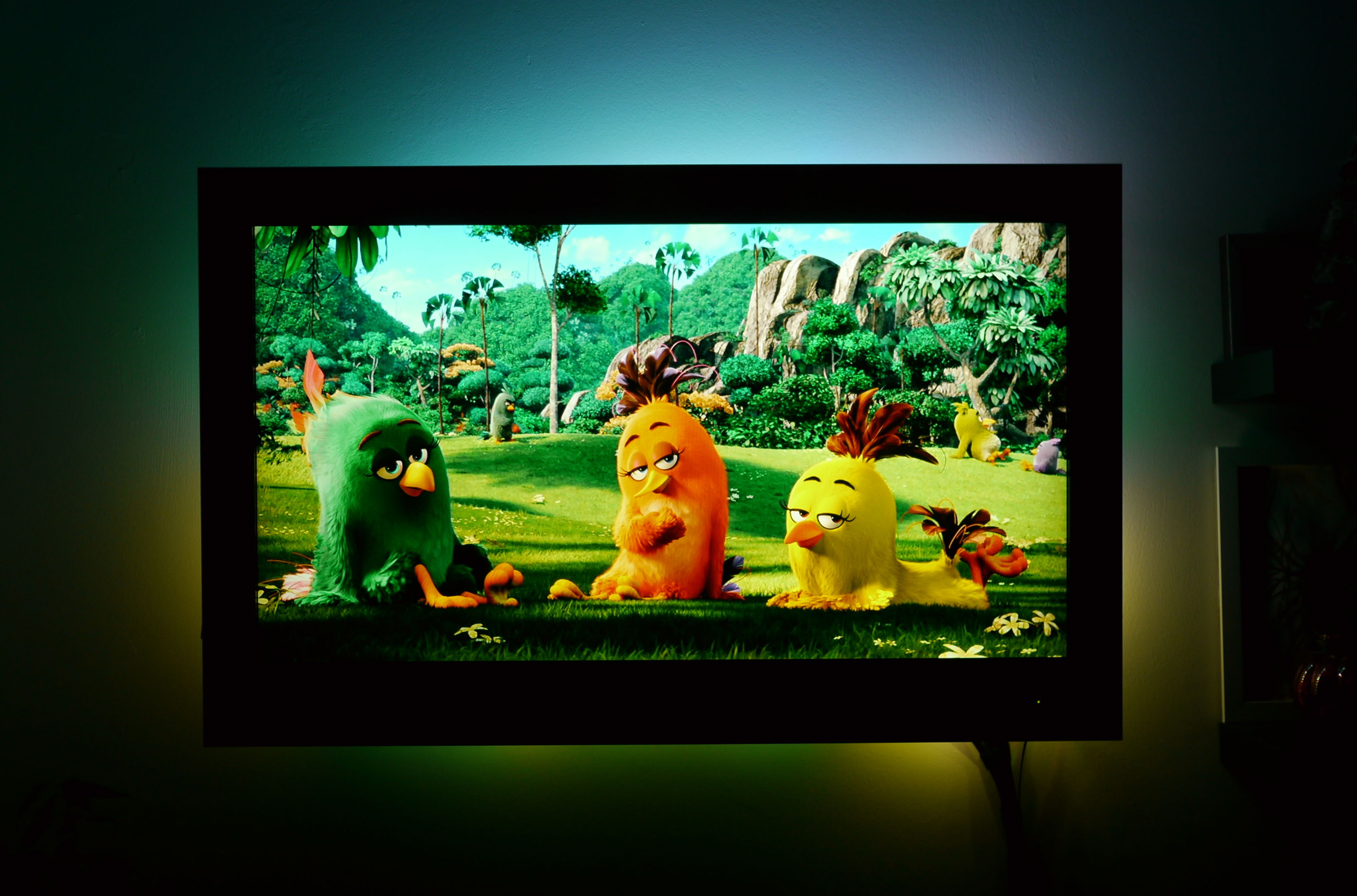 Our personal experience with Lightberry HD was great, although the setup did take a tad longer than we’d liked – around an hour and a half in total, including troubleshooting (we had issues with the Lightberry HD firmware, but the bug has since been fixed).

Once the Lightberry HD had been fully setup, it was an extremely enjoyable experience – especially playing games. Where films tend to cut instead of having one continuous shot, games don’t, which makes them great for showcasing just how responsive the Lightberry HD kit is. For example; we can see a tree being ‘lit’ at the edge of the display, and as we pan across the screen, we see the light produced follow it almost instantly. It’s something we haven’t got bored of seeing, and we’ve been using the system for almost a month now.

Of course, the Lightberry HD works great with films – it’ll only produce light in areas that are brightly lit, which both helps set the mood and looks cool at the same time. Picture a black screen with a torch shining from the bottom left hand side to the top right corner – all LEDs apart from the white light will be off, extending the reach of the torchlight, which (slightly) blurs the line between your TV and reality. 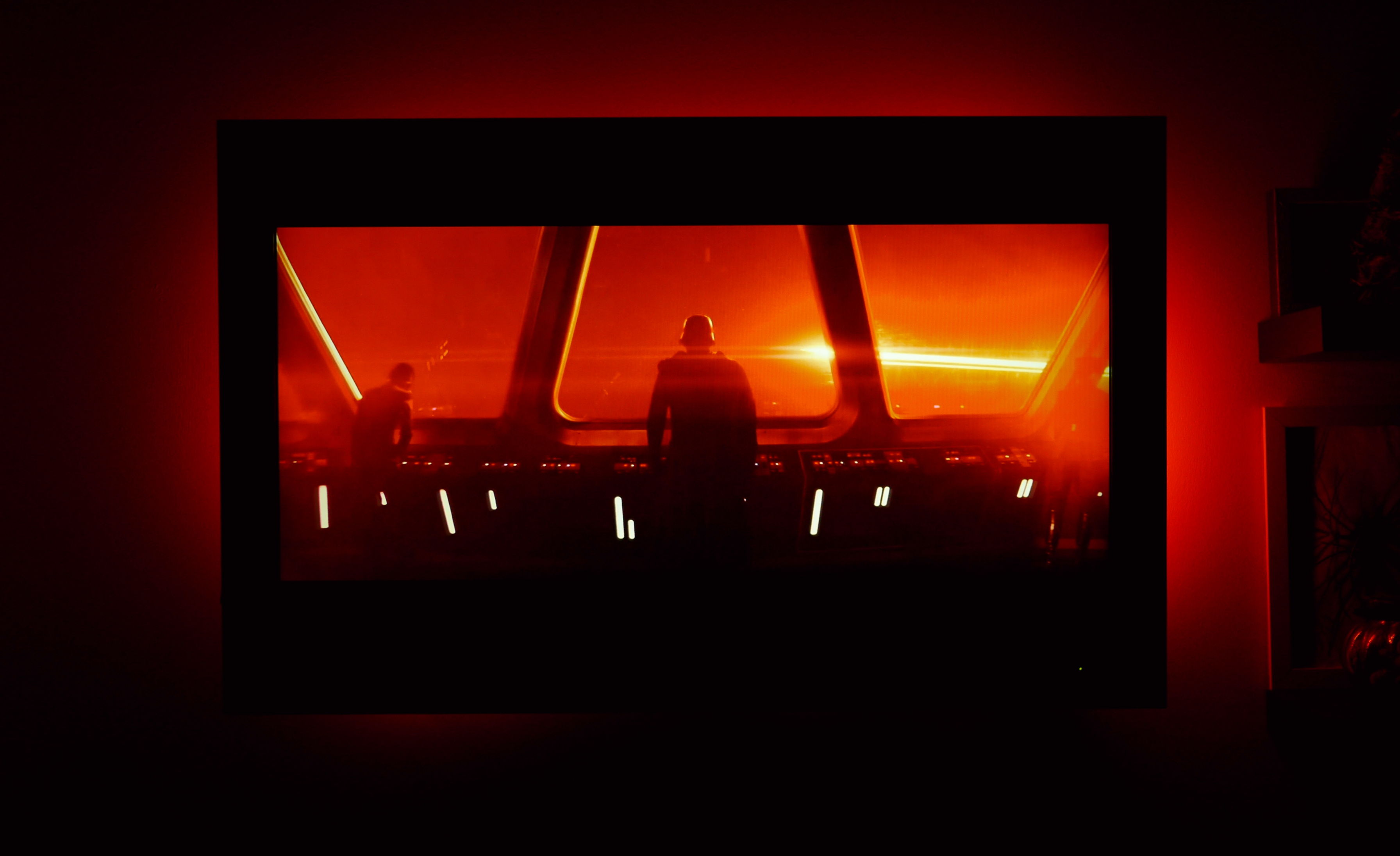 There’s only two downsides to using Lightberry HD – firstly, as the Lightberry HD requires a HDMI input to analyse the live image, built-in smart TV apps (i.e. Netflix) won’t produce lighting effects. Although with this being said, if you’ve got a media streamer, you’re all set! Secondly, we’ve noticed on a handful of occasions that (we assume) the Lightberry HD couldn’t recognise the prominent colour on screen, and started to strobe brightly between colours. The effect only lasted 5-10 seconds but when watching a tense horror movie, it ruined the mood.

We’re really impressed with the Lightberry HD overall, as it brings something new and exciting to an industry that until now has been mainly focused on screen size and display quality. It makes watching TV and gaming a much more enjoyable experience, and it definitely has the “wow” factor for those movie nights that you’ll inevitably be having if you buy it yourself. Speaking of which, those interested in purchasing a Lightberry HD bundle can do so from the Lightberry website, and will set you back between £109.19 – £115.93 (originally priced in Euros) depending on the conversion rate when purchasing.

Read next: Six of the best (and cheapest) 4K TVs in the UK

How to make any TV an Ambilight TV

Next, we’ll show you how to turn any TV into an Ambilight TV using the Lightberry HD kit. For simplicity, we’ve split the how-to into three sections:

To complete the how-to, you’ll need the following: 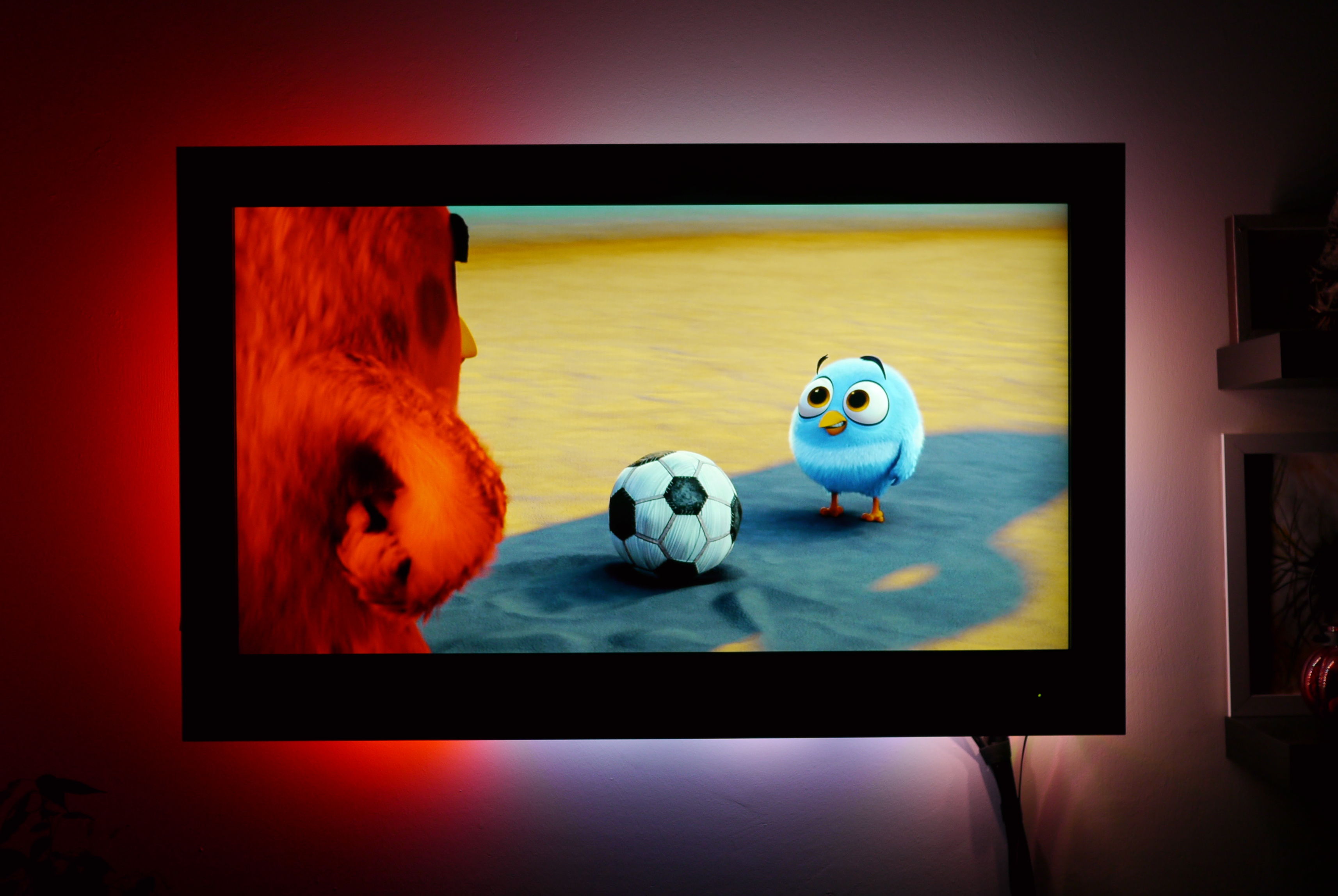 How to make any TV an Ambilight TV: Installing correct system image on Raspberry Pi

3) Insert microSD card. Next, you need to insert the microSD card into your PC or Mac. This can be done via an SD card slot if your machine has one built-in, or via a USB SD card reader (like this one).

4) Install system image on microSD card. In ApplePi Baker, simply select the microSD from the ‘Pi Crust’ section, browse for the downloaded system image by clicking the three dots in the ‘IMG Recipe’ section and finally click ‘Restore Backup’ to install. Windows users need to run Win32DiskImager as an administrator, which is done by right clicking the utility and selecting ‘Run as administrator’. Next, browse the system image downloaded earlier, then select the driver letter of the SD card in your computer and click ‘write’. 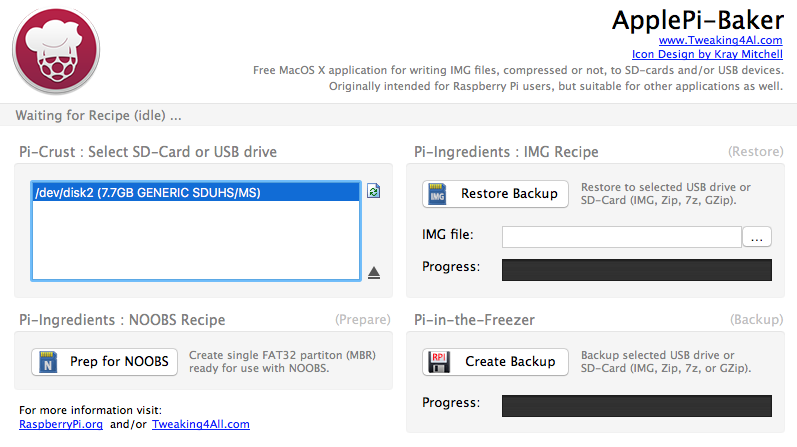 5) Insert microSD into Raspberry Pi. Once the software has finished installing the system image on your microSD card, eject it and insert it into your Raspberry Pi.

How to make any TV an Ambilight TV: Installing Lightberry HD on your TV

1) Stick hooks onto your TV. The first step is to stick the supplied Lightberry HD hooks onto the back of your TV. You should aim to place them in a similar position to what’s described in the official Lightberry HD instruction sheet, supplied with the kit, and is displayed below: 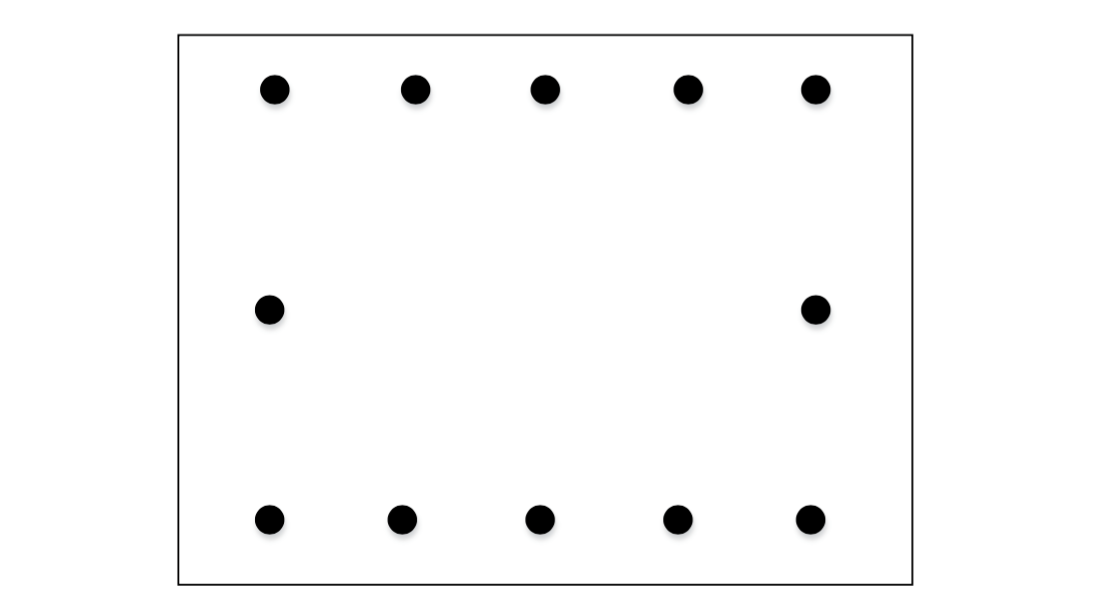 2) Align LEDs. Once the hooks are attached, unravel the Lightberry HD LEDs and run them around the edges of your TV, starting from the bottom left corner. The important thing to remember is to make sure the LEDs are facing outwards, towards the edges of the TV as noted in the below photo: 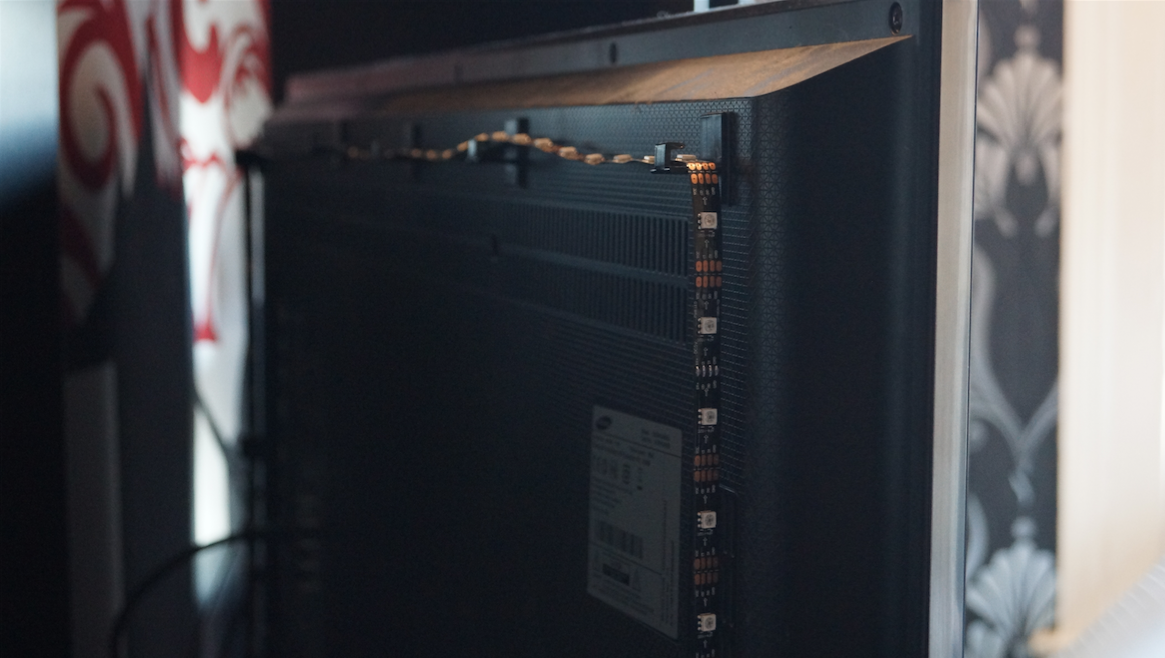 3) Align LEDs (again). As well as making sure the LEDs are facing outwards, you also need to ensure that the positioning of the LEDs match those opposite it. For example, if there are 31 LEDs along the top of your TV, you’d need to make sure there are 31 running along the bottom of the TV too. Though it sounds complicated, if you followed the hook layout as advised, it should match pretty easily.

4) Attach LEDs. Once you’re happy with the positioning of the LEDs, simply peel off the protective cover on the back and fix them to the hooks. Once all is in aligned and securely fixed, simply cut any excess LEDs – just make sure you cut along the dotted edge and not in an LED, as this may damage the system. 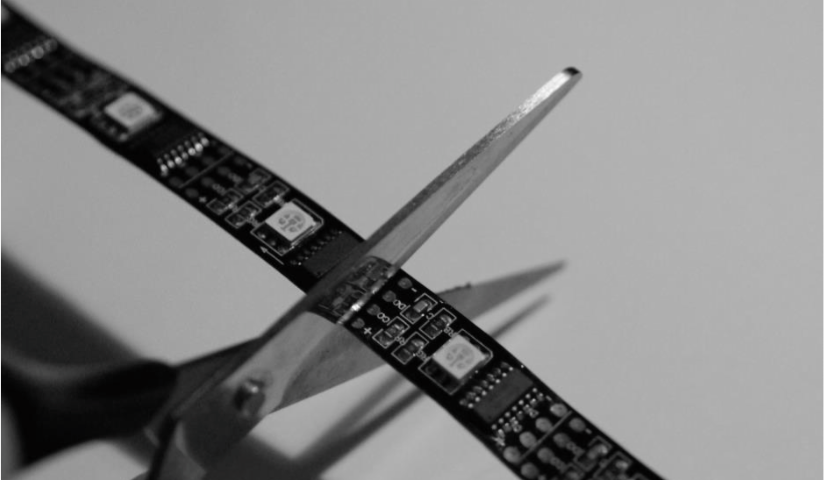 How to make any TV an Ambilight TV: Configuring Lightberry HD

1) Connect and turn on Raspberry Pi. For the configuration of Lightberry HD, you’ll need to plug a mouse (keyboard not necessary) and display into the Raspberry Pi unit.

3) Input number of LEDs. The next step requires you to enter the number of LEDs horizontally and vertically on the back of your TV, so the lights are correctly aligned to what’s happening on TV.

4) Test new settings. The setup should then display colours on-screen with the aim of verifying the position of LEDs, and whether they match up or not. If all LEDs are powered on and are the correct colour, simply save the settings and exit the app. 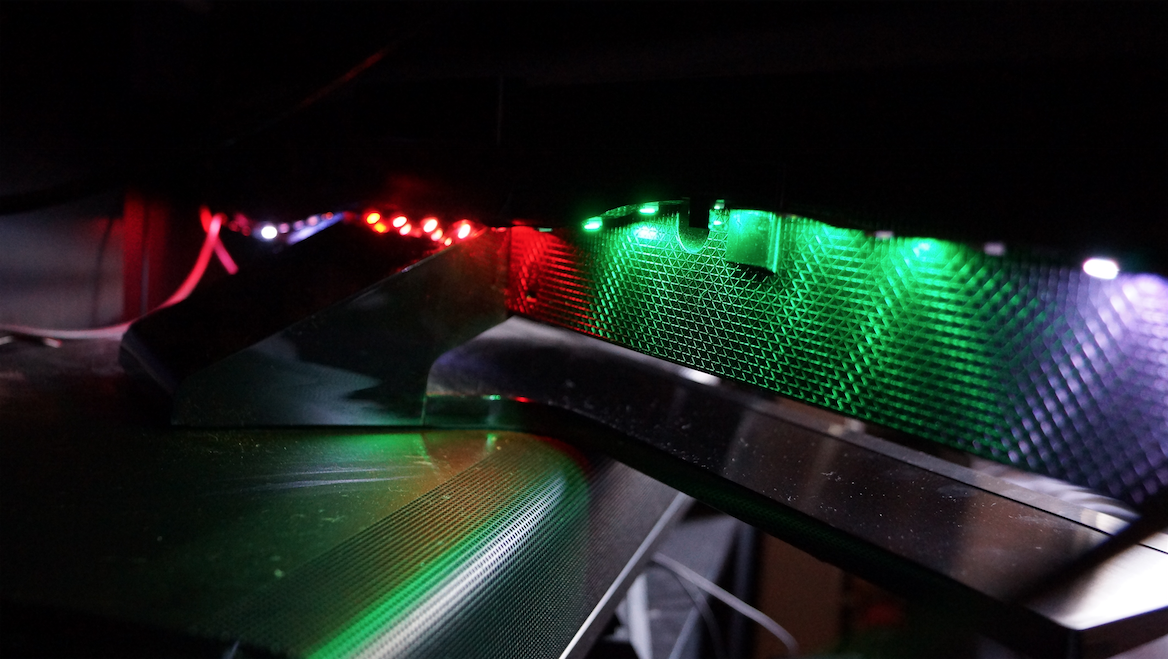 5) Unplug Raspberry Pi. You no longer need to have the Raspberry Pi hooked up to the TV, so you can now remove the mouse and HDMI – but make sure it’s always connected to power.

And that’s it – if you’ve followed our instructions, any video signal that passes through the Lightberry HD should produce Ambilight-esque effects around your TV.

Read next: 13 best media streamers in the UK right now