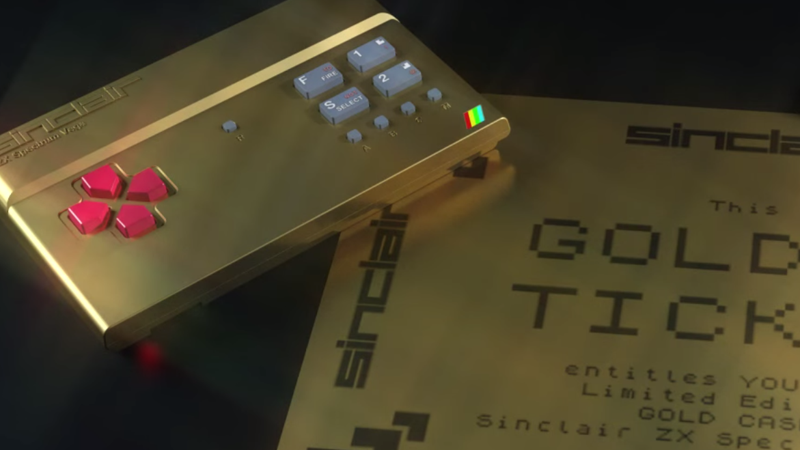 If Charlie Bucket’s dreams can come true, so can yours. Sir Clive Sinclair is giving away 12 Golden Vegas in a Willy Wonka-style Christmas campaign. Here’s how to get the chance to win a Golden Ticket.

What is the Sinclair ZX Spectrum Vega?

The Sinclair ZX Spectrum Vega, endorsed by Sir Clive Sinclair himself, is a retro games console designed and manufactured in the UK, and sold through Retro Computers.

With 1,000 games preinstalled you won’t wait around an age for games to load, as you did with the original. You can also play almost any ZX Spectrum game (that you have downloaded or personally programmed) via the Vega’s microSD slot.

The ZX Vega is connected to a TV using video and audio outputs, plus a USB connection for power. The console itself has ready-mapped buttons for all included games, and allows you to use a virtual keyboard.

The Sinclair ZX Vega costs £100 plus delivery. You can buy one from Retro Computers.

What is the Golden Vega?

The Golden Vega is a limited edition golden version of the Sinclair ZX Spectrum Vega – only 12 will ever be made. It is otherwise the same as the standard console.

Golden Vega UK price: How much is the Golden Vega?

Priceless. You cannot buy the Golden Vega, you can only win one.

There are 12 Golden Tickets in total, one of which is reserved for a random backer of the Vega’s Indiegogo campaign. The remaining 11 Golden Tickets will be placed, one per week, in sealed Vega console boxes sold between now and Christmas.

What exactly do you win?

Lucky winners will be invited to the Vega factory (aka the SMS Electronics Ltd factory), where they will be presented with their Golden Vega.

Read next: Most anticipated games.