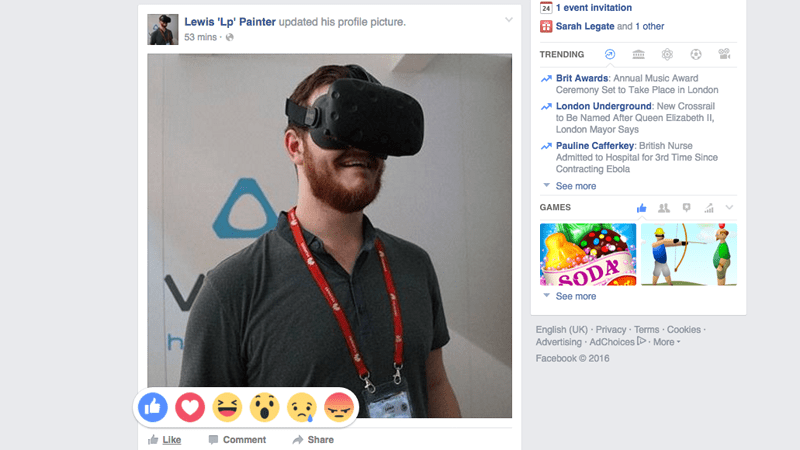 Fearing that a Dislike button would breed too much negativity on the social network, Facebook last year implemented Reactions that allow you to show empathy, displeasure or other emotions on a Facebook post. Now those Reactions could be coming to Messenger too. Also see: How to use Facebook Reactions and  Best Facebook tips and tricks.

In February 2016 Facebook Reactions were rolled out globally to iOS, Android and the web. A year later, TechCrunch reports that the company is considering bringing the feature to Messenger, and is currently running trials.

Facebook has since 2009 had a Like button, which is typically used to show that you agree with a post’s sentiment or have found it amusing. In 2015 news emerged that Facebook wanted to experiment with a Dislike button, but that it would not be the polar opposite of the Like button.

Facebook wanted to implement the Dislike button as a way of showing empathy or support, for instance when a friend’s loved one dies, they’ve been in an accident or suffered some form of bad luck.

“What they really want is the ability to express empathy. Not every moment is a good moment,” CEO Mark Zuckerberg told Time.

The reason Facebook has never added a Dislike button in the past – and why it’s possible that even after thorough testing of the Dislike button it may still never roll out to users of the social network – is that such a feature could also be used to attack a post or the person who wrote it. The ability to dislike a post has the potential to breed negativity across the social network.

Former Facebook CTO Bret Taylor, who joined the social network after his company FriendFeed was bought by Facebook, was among the minds who came up with the concept of the Like button.

Taylor told PC Advisor’s Ashleigh Allsopp: “The power of the Like button is its simplicity. With a single click, you can tell a friend that you appreciate what they’ve done. It’s a small gesture, but it has also become a meaningful way to communicate and bring people closer together.

“Negative feedback can be just as powerful, and not in a good way, so generally we have steered away from things like a Dislike button and left room for people to express disagreements in comments,” said Taylor, who is now working at Quip.

In October 2015 it was revealed that rather than adopting a Dislike button, which had the potential to breed negativity on the site, Facebook’s chief product officer Chris Cox and his team had been experimenting with ‘Reactions’. More than just Like and Dislike, these buttons were an extension of the Like button and allow you to convey anger and sadness, as well as expressing the sentiments wow, haha, yay, and love.

Facebook with Reactions looks the same as it did with only the Like button, with the thumbs-up symbol below each post on the News Feed, but when a user taps this icon they are presented with more reactions to choose from.

A lot of thought has gone into the creation of the Reactions buttons, with Facebook reportedly consulting with sociologists on human emotion.

In October 2015 Cox’s team began testing Reactions in Spain and Ireland, then Chile, the Philippines, Portugal and Colombia, according to Bloomberg Business.

In early January, Cox told a Tokyo audience of reporters: “You can love something, you can be sad about something, you can laugh out loud at something. We know on phones people don’t like to use keyboards, and we also know that the like button does not always let you say what you want.”

According to Bloomberg, Reactions had its biggest test during the November terrorist attacks in France, and people took advantage of the chance to use other emotions than Like.

Without Reactions, the only way you could previously show empathy with a friend’s Facebook post was to add a comment to show your support. This didn’t have to be public, of course, and you could also use Facebook Messenger to send them a private message to let them know you’re thinking of them. (Or pick up the phone or go and see them in person.)

It had become generally accepted that Liking a sad Facebook post was a way of showing empathy with it, but for many people that felt crass and could be taken the wrong way. That’s why a Facebook Dislike button could have been a welcome addition to the social network – but only if Facebook was able to stop it being mis-used, and that’s a big ask.

A Dislike button – if ever implemented – should be used only to show empathy, but there are also times that you might want to show your displeasure in a post. Perhaps a video of a spider coming out of someone’s ear has made your stomach turn, and you don’t want it autoplaying in your news feed, or someone has made an offensive comment with which you don’t agree. Also see: How to stop Facebook automatically playing videos.

If there is nothing essentially wrong with a post, but you don’t like it and don’t wish to view it again, it’s easy to remove it from your news feed. By tapping the downward arrow at the top-right corner of the post you can access an option to Hide post. Tap on this and the offensive post won’t upset you again. 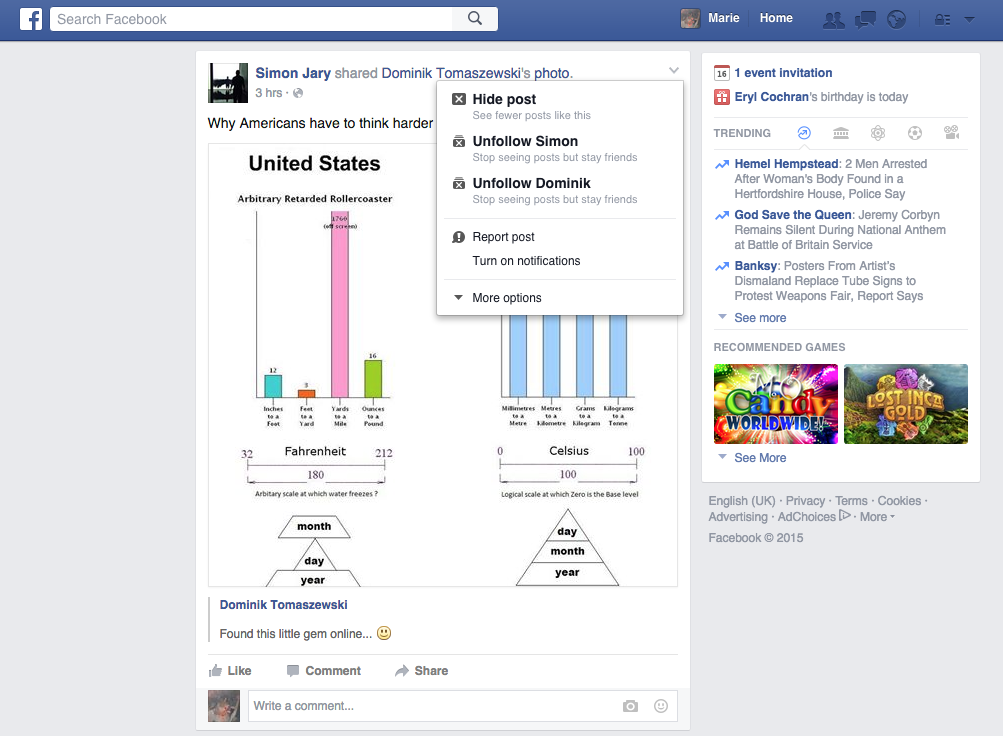 If the person who posted the status is a serial offender, also in this menu is an option to unfollow them. This won’t remove them from your friends list, but you won’t see their posts and they will be none the wiser. Then again, if you don’t feel the need to hide behind Facebook’s protection you could also comment on the post and tell them why it upsets you – they might think twice before posting similar material in the future.

At all times, though, you should remember that these people are supposed to be your friends. If you want to personally attack or criticise them then you are not friends. In such cases, bite your tongue, click on their username to visit their profile and, from the Friends drop-down on their cover photo, choose Unfriend.

It’s also possible to report posts on Facebook, although it should be used only when you feel a post shouldn’t be on Facebook at all. From the down arrow at the top-right corner of a Facbook post you can select Report this post. Facebook will ask you to confirm whether the post is annoying or not interesting, whether it features you and you don’t like it, whether you don’t think it should be on Facebook or whether it’s spam. It will then investigate the post and, if necessary, remove it from the social network. 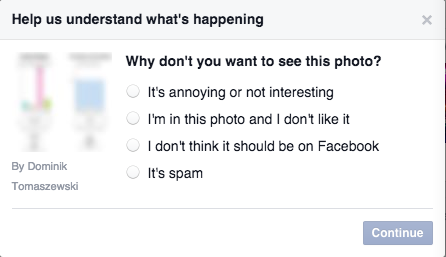