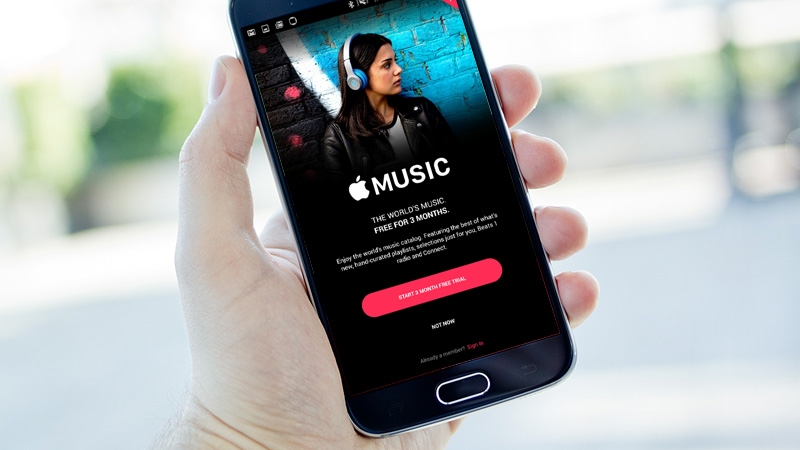 Apple is taking on Spotify, Deezer, Google Music, and a wealth of other music streaming providers with its new Apple Music service ( which is now also available in beta as a web player).

It’s been a long time since iTunes revolutionised the digital music market, and things have moved on quite a bit since then, but this latest effort could see the California giant climb back to the top of the tree. In this feature we’ll show you what Apple Music has to offer, and how to get the most from the service. Plus: how to use Apple Music on Android, and how to cancel Apple Music.

Apple Music arrived on 30 June with the iOS 8.4 update and a three-month free trial. For many users that free trial period will now be over, and they’ll now be getting charged £9.99 per month.

But don’t worry, it’s easy to cancel Apple Music by following the steps below.

The first thing you’ll need to do is navigate to the Apple Music Membership page, which can actually be quite tricky to find. You can either go to your original Apple Music sign-up email and click the link at the bottom that reads: “Manage Subscriptions,” or the easier option is to go to the iOS App Store on your iPhone and scroll right to the bottom of the screen until you see your Apple ID. Tap it and then tap View Apple ID.

Whichever you choose, you’ll now need to login with your Apple ID password. If you used the email link you should go straight to the Apple Music Membership page.

If you used the link in the iOS App Store, scroll down to ‘Subscriptions’ and then tap ‘Manage’. 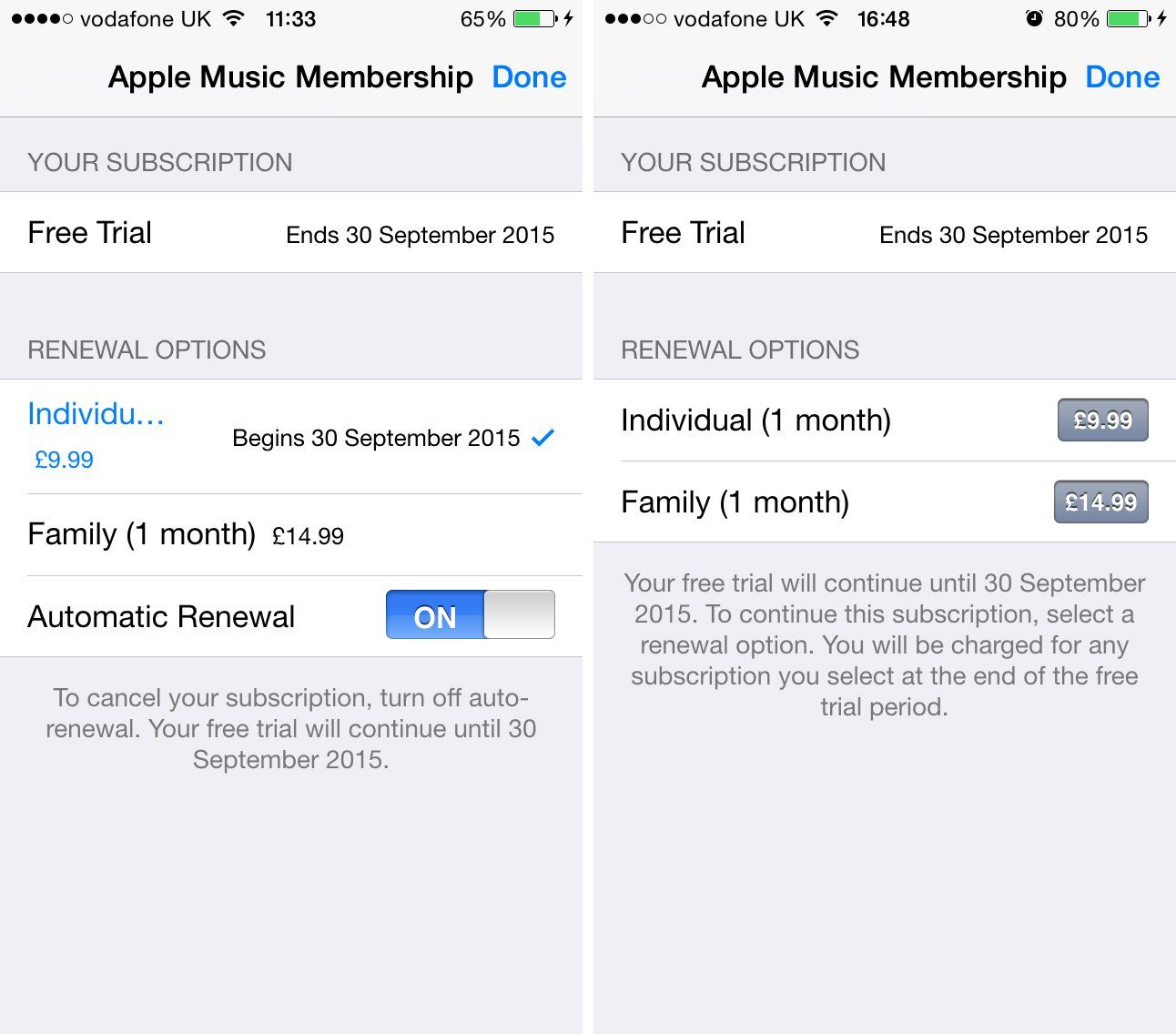 If you haven’t started using Apple Music yet, you’ll be pleased to hear that you still have the three-month trial available to you. Read on to find out how to get Apple Music and how to use it for free for three months.

How to use Apple Music: What is it and how do I get it?

With iOS 8.4, Apple updated the Music icon on your device to a smart, white version. In here you’ll find the gateway to the new service which allows you tostream music, download it to your device, connect with artists, create playlists, and listen to the brand new 24-hr radio station Beats 1. As with all other music services there is a monthly charge for all these features, starting at £9.99 for individuals or £14.99 for a family of up to six people. Before you dig out the credit card though Apple is offering a three month free trial so you can see if the service is for you. To begin the trial tap on the For You icon at the bottom of the app and select the ‘Start 3 Month Free Trial’ option, fill in the details, and you’re good to go. 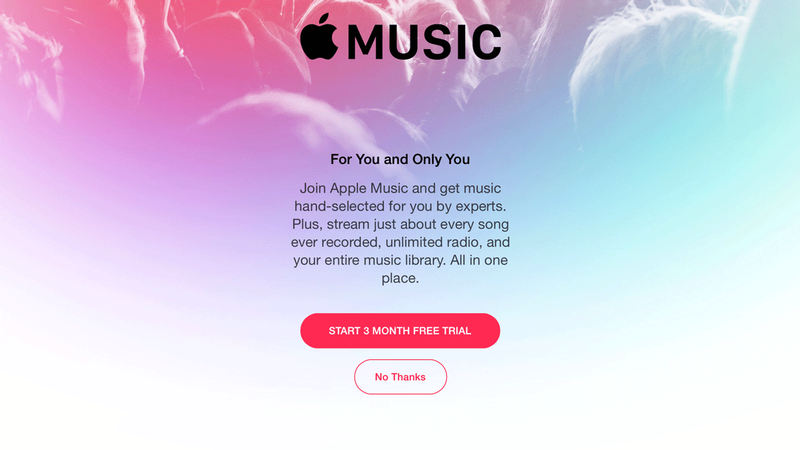 Android users can now use Apple Music, too, with a beta version of the app now available in Google Play. To start using Apple Music on your Android device simply launch the Google Play store and search for the Apple Music app. Click Install to download the app, then Open to launch it.

To make the most out of Apple Music you need to have an Apple ID. If you’ve ever owned an iPad or iPhone, it’s likely that you already have one. If you don’t then it’s easy to create one.

Click the Sign in option at the bottom of the screen. You’ll be prompted to enter your Apple ID and password. If you don’t already have one choose ‘Create an Apple ID’.

For many of the options within Apple Music you’ll find you need to sign up for a free trial of the service (which costs £9.99 per month after three months). All you can do without one is browse what music is available and follow artists through Connect. The Beats Radio option looks as though it should be available without an Apple Music account, although it did nothing when we tried it.

How to use Apple Music:  Choosing your music preferences

When you first sign up to Apple Music you’ll be presented with a screen filled with red circles, in which you’ll see various types of music. This is how you teach the service about your tastes. If you like Dance then tap on the circle, if you really like Dance tap it again and it will increase in size. Tapping a third time will reset the circle, saving you the bother of accidentally having Country dominate your playlists. When you’re happy with the list tap Next at the top of the screen. Now you’ll be taken to a screen where you repeat the process, but this time with specific bands and artists. Tap Done when you’re ready to continue. 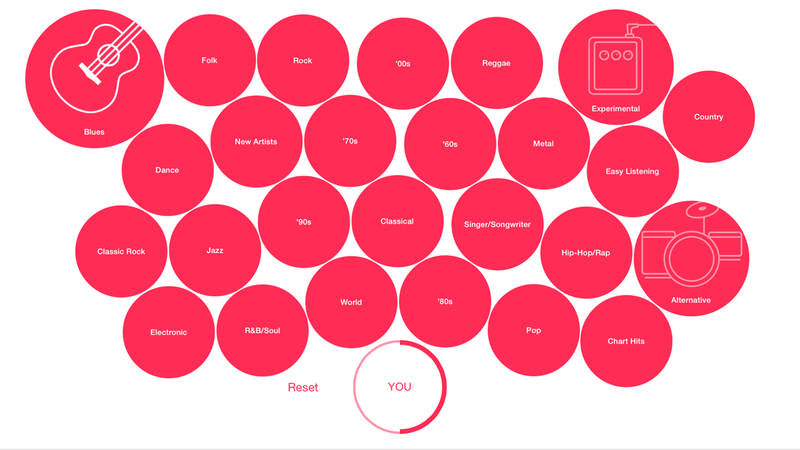 How to use Apple Music: Exploring recommended artists and albums

The Apple Music app has several options along the bottom of the screen, each of which takes you to a specific section. The For You option hosts playlist and album suggestions that Apple thinks you’ll like, based on the information you gave via those cheery red circles. To play an album or playlist just tap on the small circle with the triangle inside that you’ll see on each recommendation. If you like the album then there are a few different things you can do with it. You’ll see at the top of the album page, just above the track listing, four icons. The first is a plus sign and this adds the album to your My Music list, which holds all of your iTunes purchases and, if you have an iTunes Match account, any music that is stored in your iTunes library from ripped CDs or other music providers. The heart icon is there to let Apple Music know that you like this album/song, which will further refine the recommendations you receive. 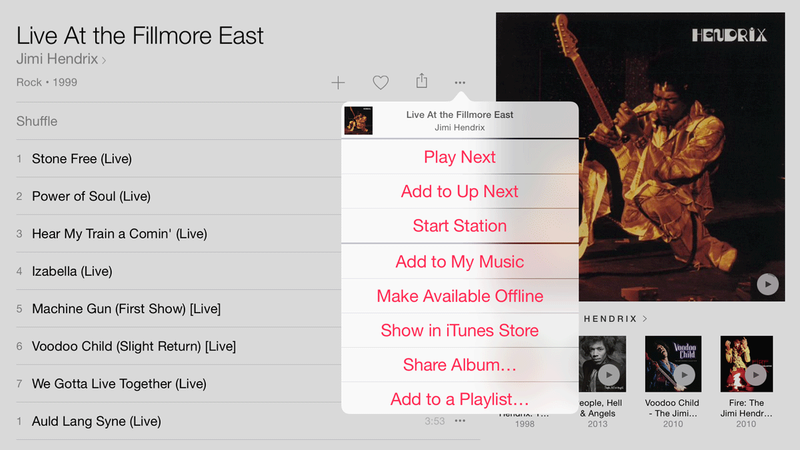 The familiar share option means you can share the album/playlist/song with friends on social media, email, or a few other platforms. Of course they’ll need an Apple Music subscription to actually listen to it. Moving to the last of the icons you’ll find the now ever present three dot option which opens up a drop down menu. From here you can queue up a song to play next, or base an automatically created radio station on this track or album via the Start Station option, but perhaps most importantly you can make the music available offline. Streaming is great, but if you’re going to be on an airplane or somewhere with patchy connectivity then you’ll want the music stored locally to avoid disappointment. The other options allow you to go to the iTunes Store and purchase the music, or add the selection to a playlist. Also be aware that each track in an album also has these options available by tapping on the three dot option that appears to the far right of the song title.

Of course is the suggestions presented by Apple don’t appeal there is the standard Search option available in the top right hand corner (the magnifying glass icon) where you can look for any artist you like. This is true on all areas of the Music app.

How to use Apple Music: New music

The New section is pretty much what you’d expect, with the latest releases from current artists available here. As far as we can tell it isn’t linked to your preferences as Little Mix kept appearing in our stream, which is definitely not something we asked for. Think of this as similar to the front page of iTunes and you’ll get the idea, with various sections highlighting popular albums and tracks. 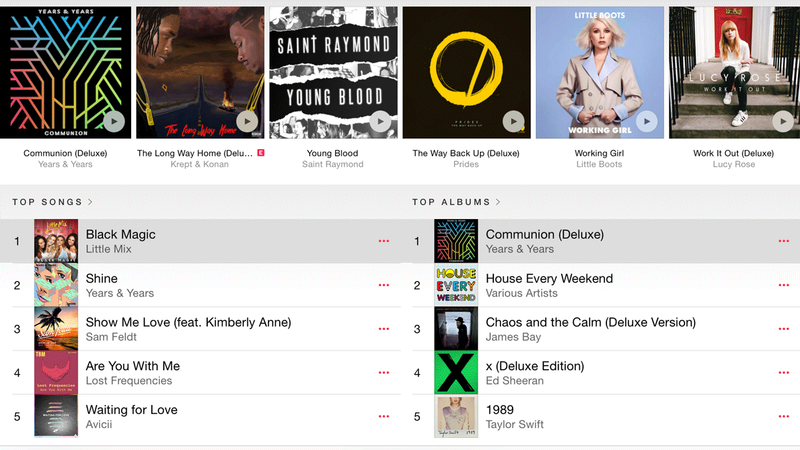 How to use Apple Music: Radio is back and actually pretty good

At the announcement of its new Music service Apple went to great lengths to promote Beats 1, a new 24-hr, global radio station that features, among others, former Radio 1 DJ Zane Lowe. To find this tap on the Radio option and then you’ll see the Beats 1 logo dominate the top half of the screen. While radio has obviously been around for a very long time, the recent trend in music services has been to provide automated stations that eschew hosts and instead use algorithms to put together playlists. Apple still offers these themed stations, but Beats 1 is more akin to classic radio, with presenters talking and selecting songs. In the short time we spent with it, we were impressed with the variety of music on offer. There are a few scattered ads, some shows are repeated at different times of the days, and like most other mainstream stations the lyrics are censored to be family friendly, but overall the first impressions of Beat 1 are very encouraging. 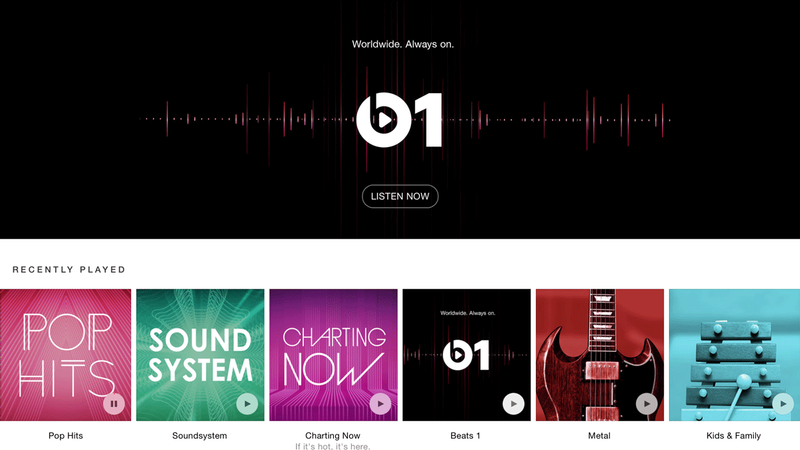 How to use Apple Music: Connect with the artists

Another interesting addition to the Music service is the Connect section. In here you’ll find various things that artists have posted, such as photos, artwork for upcoming releases, lyrics, quotes, and links to promotional material. It’s something of a curiosity at the moment, but if artists (or most likely their PR firms) decide to use it then you could come across some fascinating stuff. 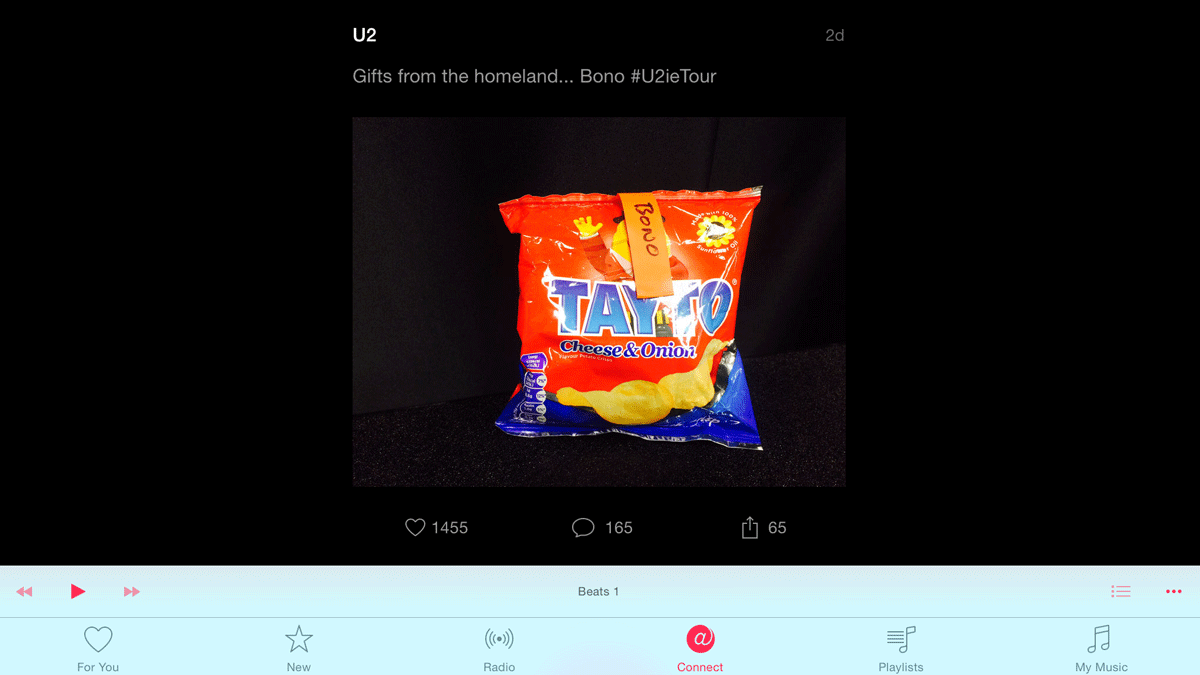 How to use Apple Music: Your music

The remaining options are ones you’ll already know from iTunes, which display your playlists and music library. You can create new playlists directly from the app, and if you then go back to the For You or New sections you can add songs from there. That’s it. A whistlestop tour of the Apple Music service. As it’s still a new creation, there may well be changes along the way, but so far it’s an easy to use app that makes accessing new, and old, music simple and fun.