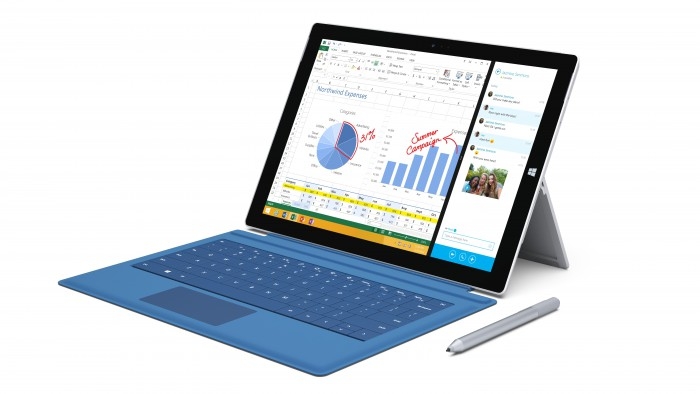 It’s fair to say that Microsoft made some bad choices in Windows 8, paramount of which was the touch optimised interface. Forcing this strange and clunky method of control on the user was, in the most part, unwanted and certainly unwelcome. Windows 10 fixes most of these issues with a new feature called Continuum, which makes sure you always have the best interface for your device at all times.Here we explain what Continuum is and how to use it on your tablet, touchscreen laptop, and Windows phone.

How to use Continuum: What is it?

Continuum is a way for Windows to detect the hardware you are using and ensure that you always have the optimum interface on your machine. If you are using a desktop with no touchscreen, then Windows will now know this and present the traditional mouse and keyboard interface that works best on that setup. For those with a hybrid device, such as the Surface Pro 3, Continuum will monitor whether a keyboard is attached or not and provide either a tablet or touchscreen laptop interface. If you then remove the keyboard this will be detected and the interface adjusted accordingly by the system, and vice versa. It’s simple and keeps out of the way, just like good software should.

It isn’t just Windows itself that changes to suit your hardware; applications will also adjust to offer the best way to interact with them on the platform you’re using. Microsoft has made this possible in a large part by the introduction of Universal Apps, which share the same underlying code (as do the various version of Windows 10) and are able to adapt to either a desktop or mobile interface without the need to launch a separate version.

How to use Continuum in Windows 10

As Continuum comes built in to all versions of Windows 10 there isn’t much to do in terms of setup. If you have a traditional desktop or laptop your system will always use the same interface. For owners of tablets and hybrid devices there are options for controlling how your device responds to a change of hardware, such as removing or adding a keyboard.

In Windows 10 when you remove a keyboard, for example, the system will pop up a dialog box asking if you want to enter tablet mode. Tapping this will then adjust the interface. Of course the reverse is true when you reattach the keyboard. Rather than be prompted every time, you can select an automatic response so that Windows knows what you want it to do. 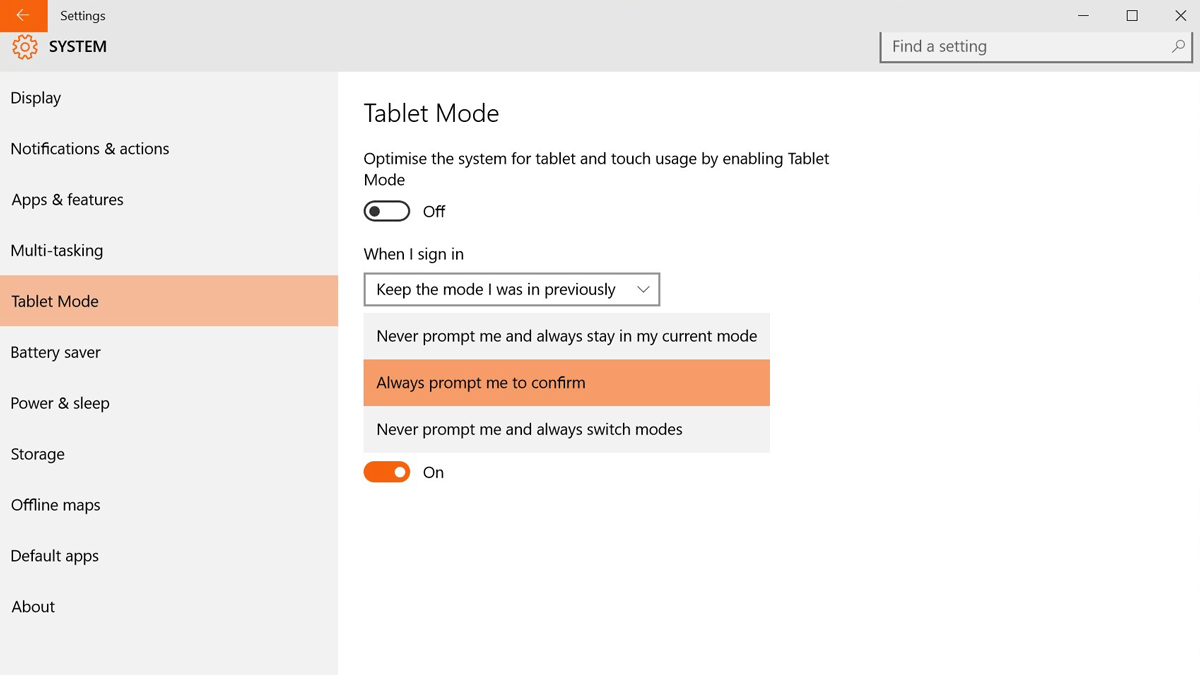 To find this open the Start Menu and go to Settings > System > Tablet Mode.

Under the heading ‘When my device wants to switch modes’ you’ll see a drop-down menu. Tap this and you’ll see the following three options:

The first is essentially turning off the Continuum feature, the second is the default setting where you are asked every time if you want to switch modes, and the third is the automatic switching option. Experiment with which one works best for you, and of course you can change it at any time.

The other setting in this menu allows you to instruct Windows 10 which interface is the default one you want when you sign in. 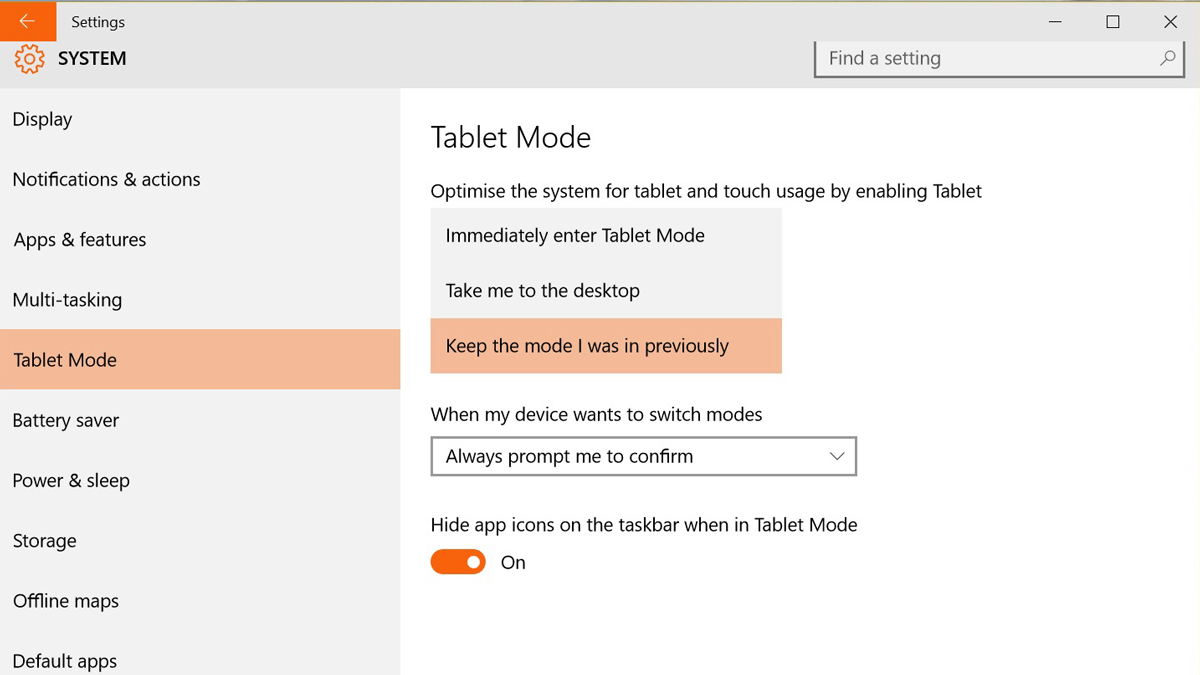 How to use Continuum: Switching between modes

Whenever you switch between modes you’ll find that the interface has different options. Entering tablet mode will mean that tapping the Start button (the Windows icon in the bottom left corner) will launch the Window 8 style fully-expanded Start Screen. Menus are also available by swiping in from the left or right. The Charms bar is no longer around in Windows 10, so swiping in from the right reveals the Notification Centre instead.

To exit tablet mode you either reattach a keyboard or tap the Tablet Mode option at the bottom of the Notification Centre, which then asks you if you want to switch. It’s all very quick, easy to use, and feels a long way from the pain of Windows 8. 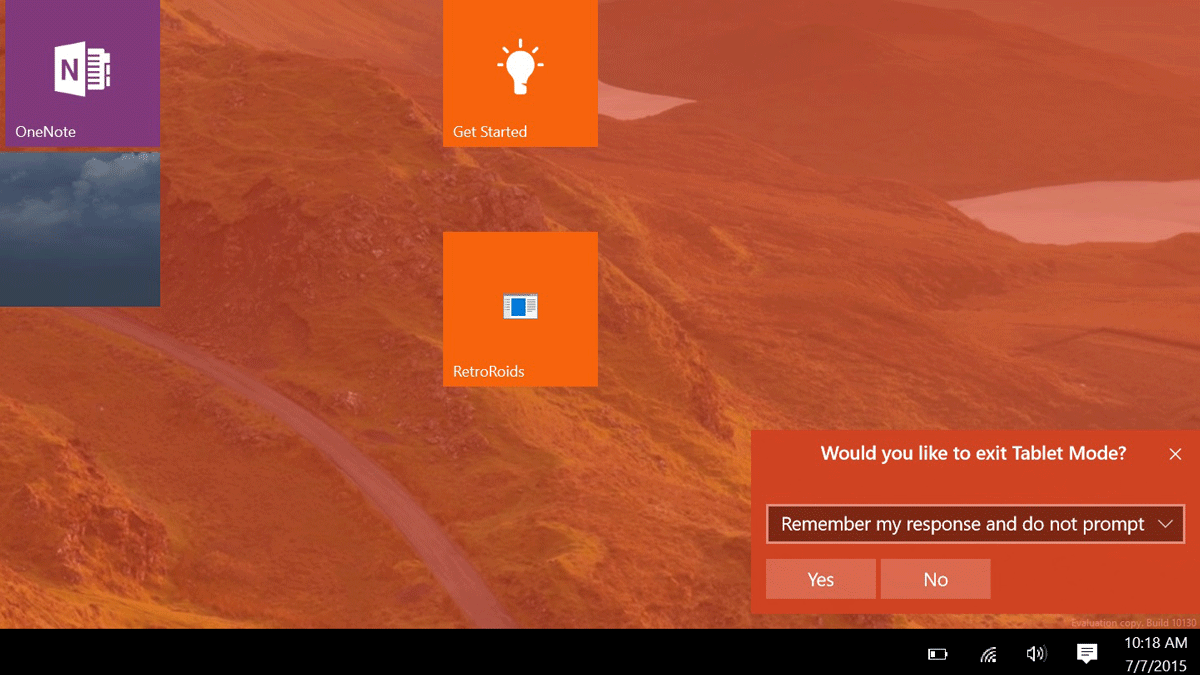 How to use Continuum: Turn your phone into a PC

One of the most exciting parts of Continuum is the way it can turn a Windows Phone into a PC. Microsoft recently demonstrated how connecting a phone to an external monitor, keyboard, and mouse turns the universal apps on the phone into fully fledged versions of Office, Outlook, or other Microsoft applications. You can even run two things at once, independently on the phone screen and external display, so your kids can watch Netflix while you answer a call or catch up on emails.

Due to the new Qualcomm chips required for this advanced feature, Continuum on Windows Phone will be restricted to new device models set to be launched with Windows 10. Expect to see reviews of these devices on the site, and a full explanation of how Continuum works on them, as soon as they are released.