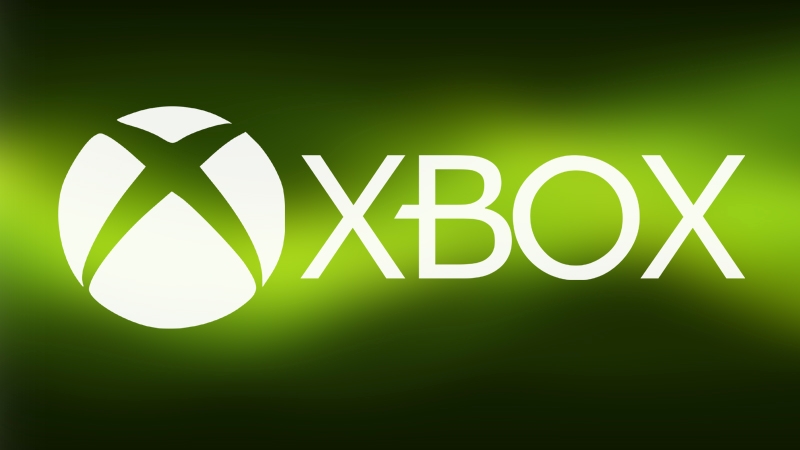 We’re big fans of Windows 10. The interface tweaks and new features – plus the free upgrade for most users – make is an absolute no-brainer when it’s released on 29 July. One of the new features lets you record any game you play in Windows and take screenshots. Here we’ll show you how to record games in Windows 10.

There’s currently no way to upload it directly to YouTube or any other video-hosting site, nor to stream your games live to the internet; you’ll need a third-party app such as Twitch to do that.

Game DVR works in a similar way to the same feature on the Xbox One. On the console you double-tap the Xbox button to bring up an overlay which also lets you press the X button to record the last 30 seconds of gameplay, since the Xbox One is always recording what you’re playing. It’s ideal for capturing something interesting that just happened.

With Windows 10, you get a new app called Xbox. This lets you check on your achievements when you’re logged in with the same ID you use on your Xbox, as well as message friends. It also houses Game DVR where you can find screenshots and video clips from both your Xbox One and games you’ve played on your Windows 10 machine, be that a tablet, laptop or PC.

How to record games with Game DVR in Windows 10

Step 1. In any game, press the Windows key along with G to bring up the Game Bar. This is a little like the Snipping tool overlay which offers a few controls for recording games. It doesn’t matter if it’s a Steam game, a classic Windows game or something from the new Windows Store. 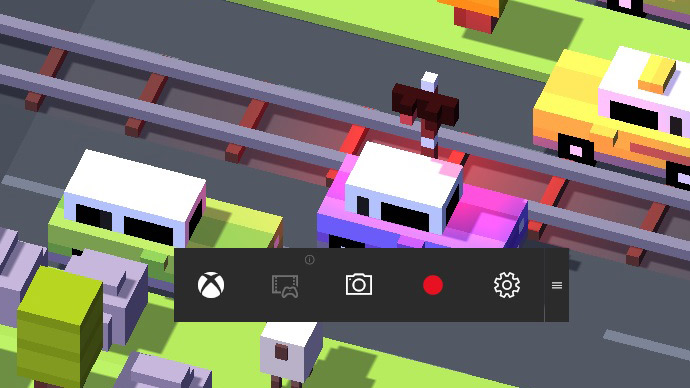 Step 2. The game will continue to play in the background, so you may want to pause it. Then, press the red record button (shown above) to begin the recording. A timer will start and after a few seconds the Game Bar will hide and you’ll see only a small red timer at the top-right of the screen. In this build of Windows 10 (10130) the timer display is corrupted, but it should be fixed soon. 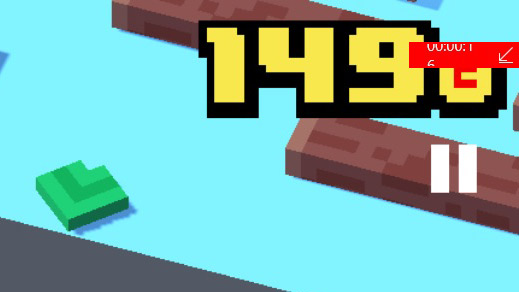 Step 3. To stop the recording, press Win+G again and tap or click on the red square. A message confirms the clip has been recorded and it’s automatically saved in your user account’s Videos folder. 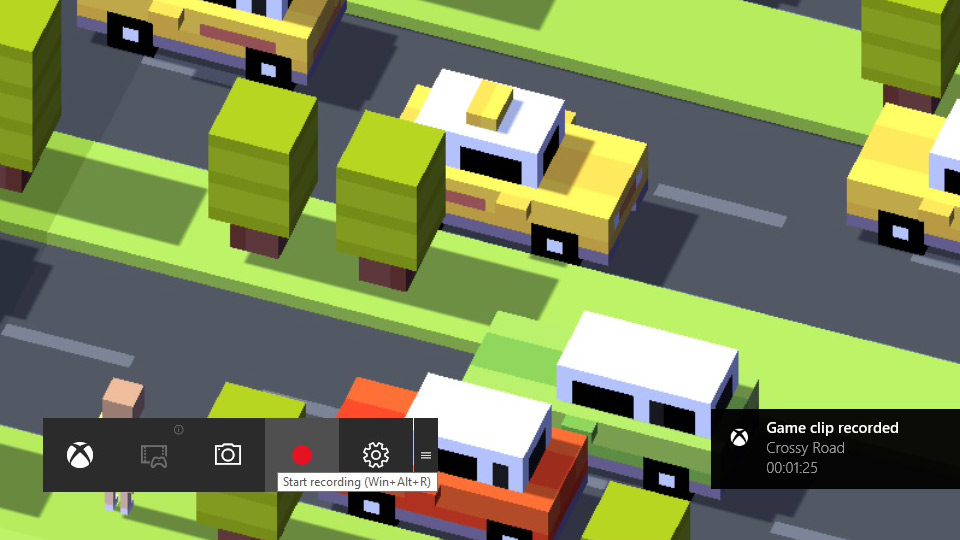 Step 4. You can use the shortcut Win+Alt+R to start and stop recordings without having to bring up the Game Bar and click on it. This way it’s easier to record clips while you’re in the middle of a game.

Step 5. You’ll notice that one of the icons on the Game Bar is greyed out – the Game DVR icon. Tapping it when it’s live automatically saves the last 30 seconds of gameplay, just as with the Xbox One. To enable it, launch the Xbox app and click on the settings icon at the bottom of the left-hand menu. Just type Xbox in Windows 10’s search box in the taskbar to launch the app.

There are lots of settings, but the first is an on/off toggle for Game DVR. It’s on by default. You can also customise the shortcuts to your liking. One you might want to change immediately is the screenshot shortcut, especially if you own a Surface tablet which has no PrtScn button. 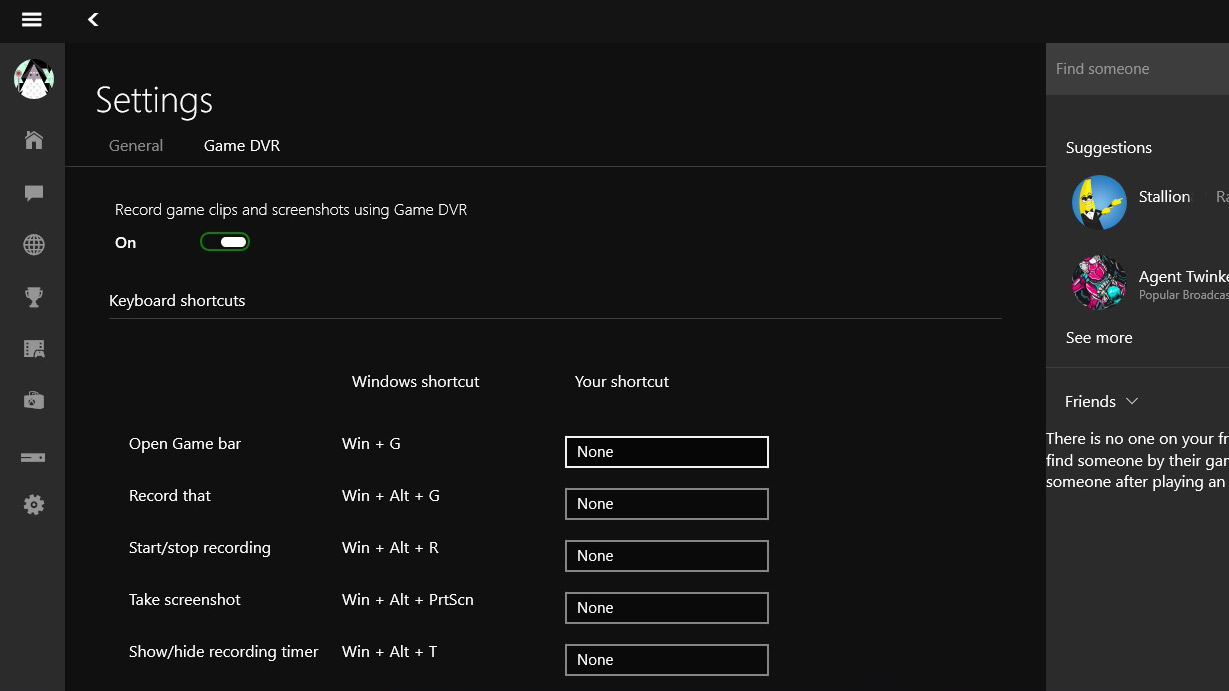 Step 6. Scroll down the list of options until you ‘Record in the background while I am playing a game’. It’s advisable only to enable this when necessary as it does have an impact on game performance and could make gameplay choppy if your machine doesn’t have enough spare processing power. Below the switch is a drop-down menu to change the amount of time to save. 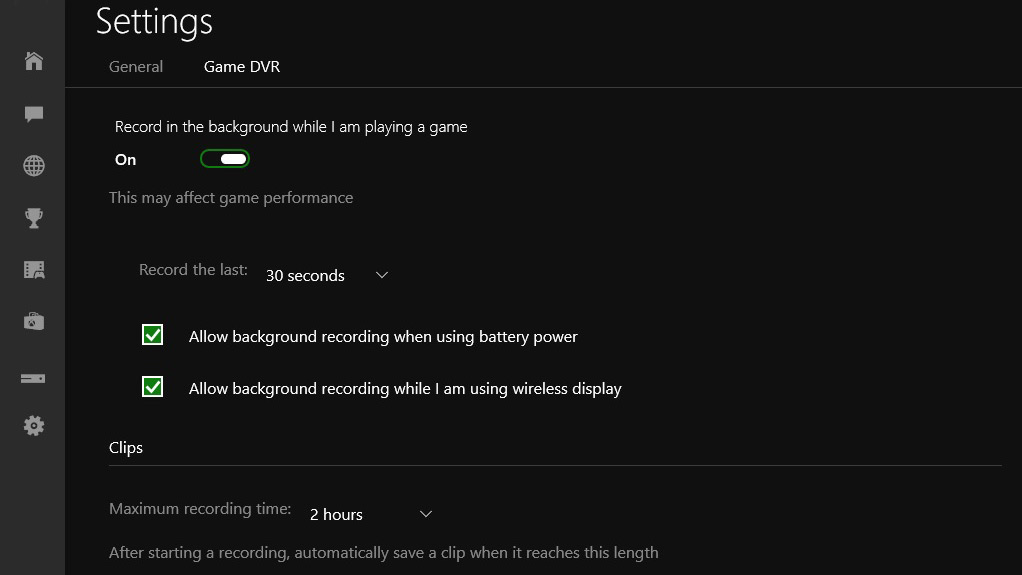 Once enabled, the Game DVR icon will light up in the Game Bar, but you can use the Win+Alt+G shortcut to save the last 30 seconds (or whatever length you set for background recording) as a video file.

Step 7. If you want to review screenshots and video recordings in the Xbox app, simply click on the Game DVR icon in the left-hand menu. There are three sections: On this PC, shared and community.

These are fairly self-explanatory, but the shared section includes clips you’ve recorded on your Xbox One when logged in with the same Xbox gamertag or Microsoft ID. Click on a clip in the list and it will show on the right. Use the playback controls to watch the video. 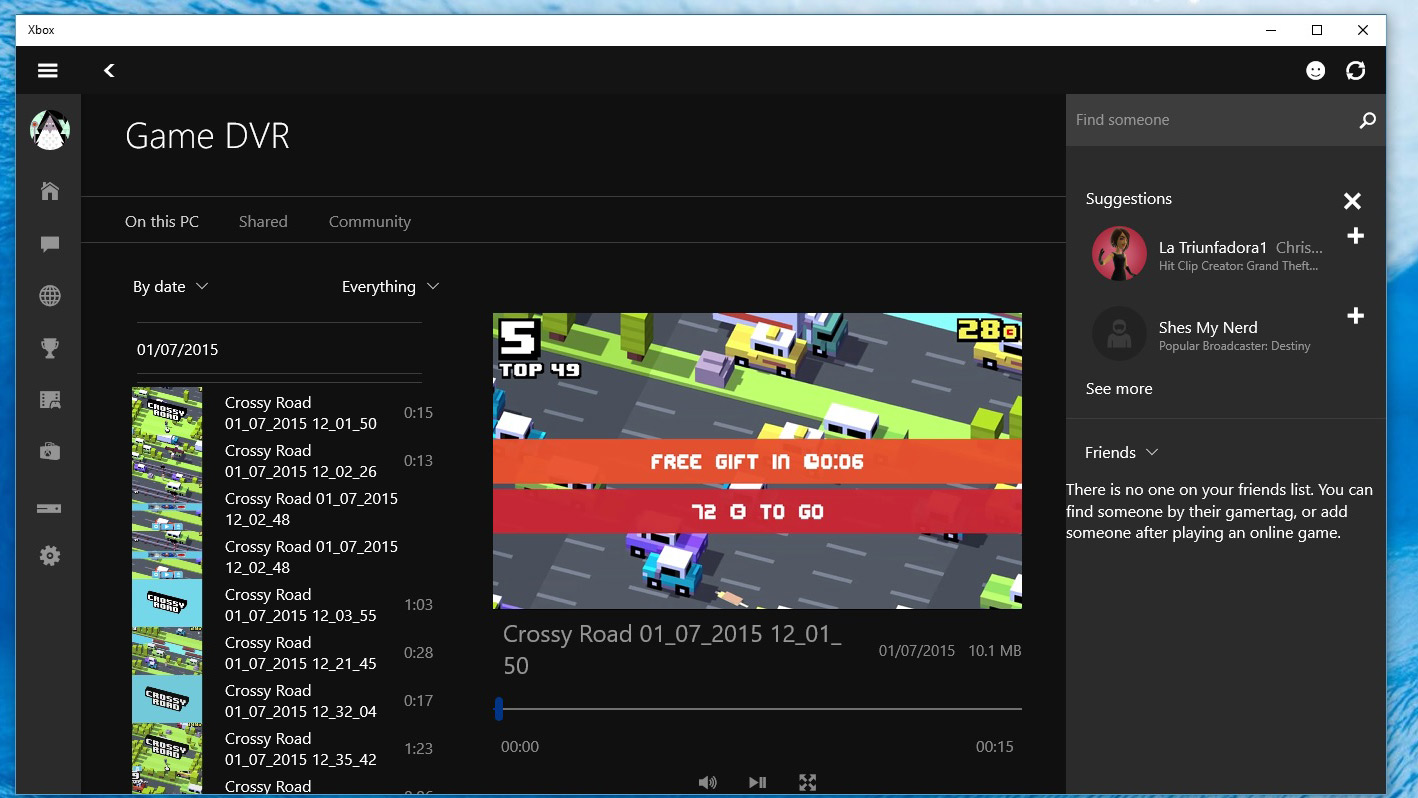 Step 8. Below the playback controls is a Trim link. Click this to make the blue markers appear. Just drag these to the positions where you want the video to start and end. Then click Trim original or Save copy depending on what you want to do. 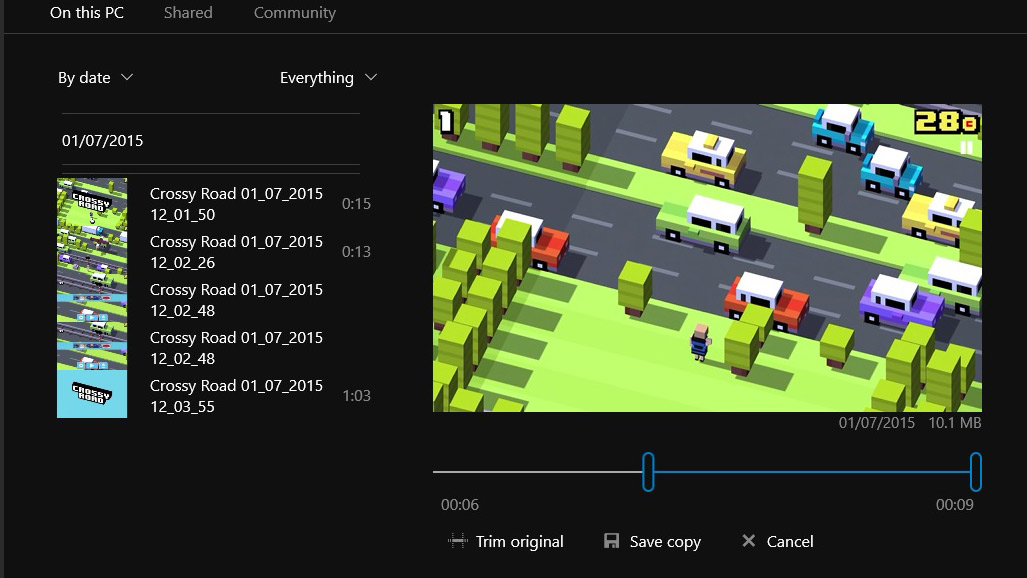