The free upgrade to  Windows 10 ended on 29 July 2016. You can still upgrade, of course, but should you? With scare stories of ransomware encrypting files on unsupported versions of Windows, there are certainly reasons to consider it.

Here’s what you need to know about the pros and cons of upgrading to Windows 10.

Which versions of Windows are still supported?

Microsoft is pulled the plug on Windows Vista support on April 11 2017, and Windows XP hasn’t received security patches for a while now. In the wake of multiple ransomware attacks, Microsoft has taken the unusual step of issuing a patch for both operating systems because of the high risk and fact that millions of people are still using these versions of Windows.

However, this has come after computers have been infected, which is why it’s best to use a version of Windows that receives automatic updates that help to protect you (and your files) from disaster.

Windows 8 isn’t supported either, but most machines with Windows 8 should have been updated to Windows 8.1, which is still supported. Windows 7 also receives updates and will until 14 January 2020.

Business users can opt to pay for Windows 7 Extended Security Updates (ESU). This is a new offering from Microsoft for those who can’t or won’t update to Windows 10 before the free updates cease in 2020. The ESU programme runs until January 2023, but prices haven’t yet been announced.

If you’re a home user wondering about this, it’s only for Windows 7 Professional and Enterprise versions, and the cost is likely to be prohibitive.

How much does it cost to upgrade to Windows 10?

As you’ll see in our Home vs Pro comparison, few home users will need the extra features in Pro.

It’s a clear message from Microsoft (and we happen to agree) that it’s not the best plan to stick with XP or Vista. And if your computer is running Vista or XP then the chances are it’s quite old, and likely to have parts wearing out.

Instead of splashing out £119.99, you could put that amount towards the cost of a new machine. Check our reviews of the best cheap laptops to ensure you get the best possible value.

Virtually all software for Windows XP and Vista work in Windows 10, and remember that some software is already obselete for older operating systems such as XP and Vista – the Google Chrome browser is the latest to join the list. While you could switch to another browser ( read our advice on the best browsers for Windows), how many times will you switch your software before you upgrade your PC?

Those who choose to upgrade to Windows 10 will also benefit from the all the updates since it first launched. They have added quite a few new features.

Can I downgrade Windows 10?

A common question is how easily can you go back to your old OS if you don’t like it. The answer with Windows 10 is that it’s very easy.

Microsoft has built in a simple process that only requires a few clicks to have the system roll back to your previous version of Windows (so long as you haven’t deleted the windows.old folder in which the previous version lives). You can read our guide to downgrading Windows 10. 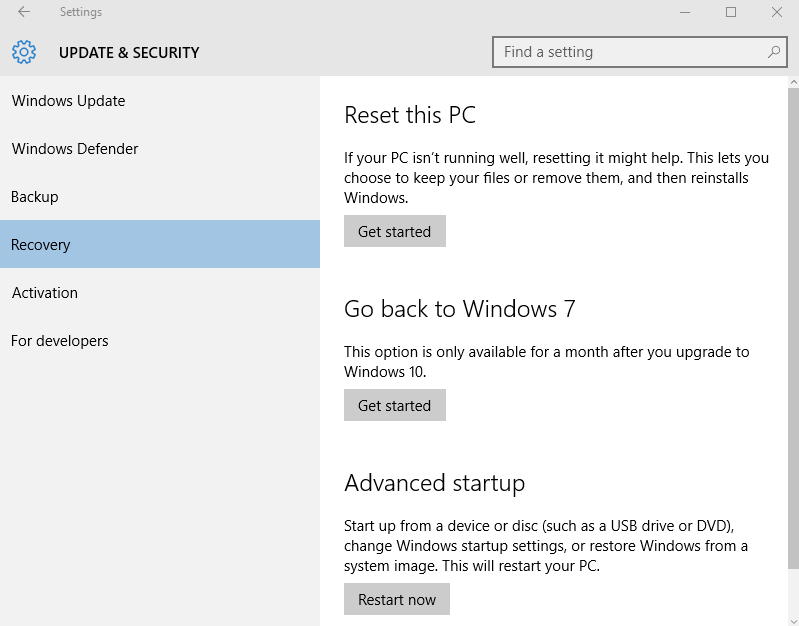 Of course, as with any operating system installation, you’ll want to make a full backup of your data before you begin either the upgrade or the downgrade.

The roll-back doesn’t always work perfectly, so there is a chance that upgrading and rolling back won’t be a seamless process: bear this in mind if you’re thinking about upgrading just to see whether you like Windows 10. Again, make a FULL backup beforehand to guard against any problems.

It’s hard to imagine that Windows 8 will be fondly remembered by anyone. While it has a fine engine at its core, the clumsy interface that favoured touch over traditional mouse and keyboard inputs made it confusing to use at first.

Splitting apps into two desktop environments – modern and classic – gave the whole OS a schizophrenic persona and one that was totally unnecessary as so few decent Modern apps were actually available.

Windows 10 avoids the same pitfalls by returning to a Windows 7 style desktop, complete with a Start Menu that features optional live tiles for those who liked that addition to Windows 8. The Charms bar from ‘8 is no more, instead replaced by a more robust Settings section that is easily available from the Start Menu.

Modern apps run in windows on the desktop, so you don’t notice the difference between them and traditional apps.

Touch hasn’t disappeared entirely, because Windows 10 is also available on tablets and hybrid 2-in-1 devices. And a new feature called Continuum senses what kind of device you are using and adjusts the interface accordingly.

So, for example, if you have a Surface Pro and remove the keyboard, Windows 10 will then switch to an entirely touch based system, and vice versa. 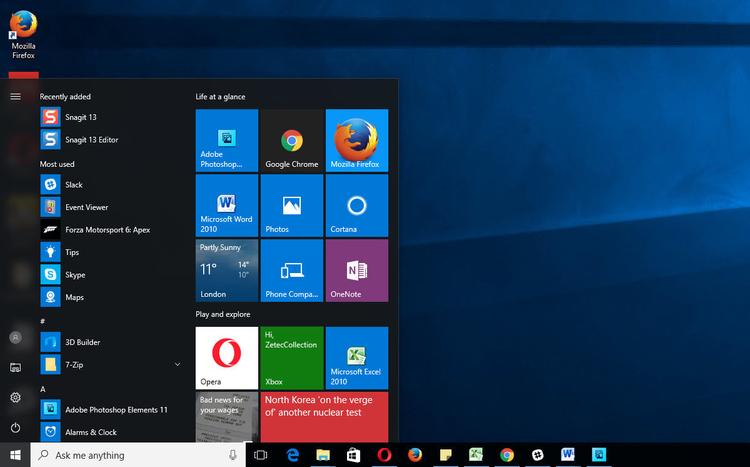 Is Cortana any good?

Virtual assistants are already helping out on your phone and around your home, with the Google Assistant on phones and Google Home and A mazon’s Echo featuring the ever-helpful Alexa.

Microsoft has an assistant, too: Cortana. She lets you control elements of your PC by using your voice. Clicking on the search section of the Taskbar will open up Cortana, and from there you can make web queries thanks to the new universal search facility that incorporates the internet as well as your device.

You can also schedule appointments in your calendar, dictate notes and reminders, control your media, get map directions, and a host of other commands. What’s even better is that Cortana is available for Android devices and the iPhone, so no matter what your choice of device you can still sync up your data. Read more about how to use Cortana in Windows 10. 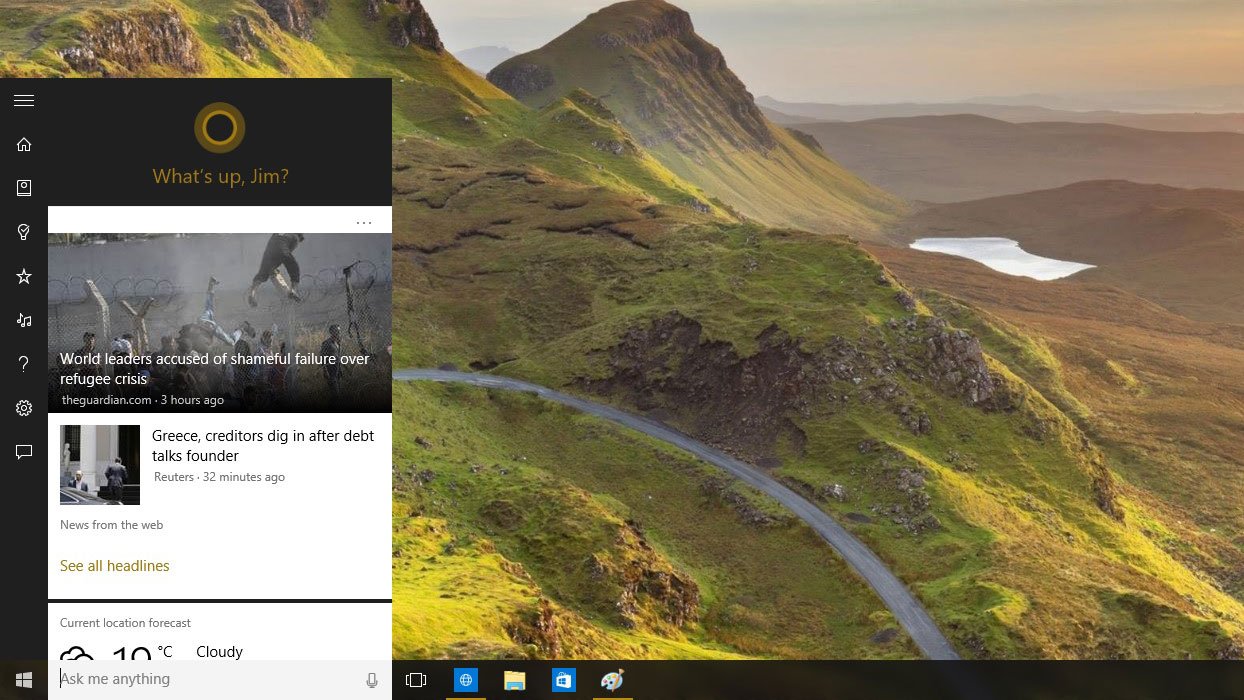 Doesn’t Windows 10 spy on you?

Much has been written on Windows 10’s privacy, or lack of it, but in short, no Windows 10 does not spy on you.

As of the Creators Update, it also changed the setup options so users could opt for ‘Basic Level’ of data collection or the ‘Full level’. As Terry Myerson  explains in a blog post, the data collected is “necessary to keep your Windows 10 device secure and up to date”.

And for the first time ever, the firm has published a full list of the actual data that’s collected so you can read it for yourself.

While Windows 8 was an unpleasant surprise for a lot of people, Windows 10 goes a long way to putting that right. The OS is clean, familiar, like it was on Windows 7 and its predecessors, where it’s easy to understand, plus it has a wealth of new, helpful features that you’ll actually want to use.

Despite now being a paid upgrade to all, Windows 10 offers a good performance boost for Windows 7 users and below, and a better user experience for those on Windows 8/8.1 – making it easy to recommend for all. But instead of shelling out £119.99 for a copy to install on your old computer (anything purchase over five years ago), we recommend buying a new one.

For those with younger machines running supported versions of Windows, feel free to stick with Windows 7 or 8.1 for now, but don’t use them after the security updates stop flowing.