Hitman featuring Agent 47, the sixth game in the series, is going on sale in the UK tomorrow, and if you’re desperate to give it a go you can buy and pre-download Hitman right now. Here’s what we know about Hitman Agent 47 including the UK release date, price, pre-order, platforms, gameplay, betas, exclusives and official trailer. Read: 26 most anticipated games of 2016: Best games of 2016 for PS4, Xbox One, PC, Wii U, 3DS.

“This is a true Hitman fantasy, a highly challenging, thinking person’s game where creativity is rewarded,” said Christian Elverdam, creative director at Io-Interactive. “You have the power and intelligence of Agent 47 at your fingertips and it is your choice whether to use brute force or orchestrate a genuine masterpiece of assassination.”

Since the game is called just Hitman it was initially referred to as Hitman 2015, however the delay (see below) means it’s now known as Hitman 2016 but also commonly called Hitman Agent 47 which is what we’re using.

Hitman Agent 47 UK release date: When is Hitman coming out?

If Christmas was a bit disappointing for you, it might be because you had your fingers crossed for a Hitman shaped present under the tree (a game box we mean, not an actual hitman!). The game was due to be released on 8 December, but has been delayed until 11 March.

The Hitman Agent 47 delay is to allow IO Interactive additional development time to include more content into the base game – more than was originally planned – and then ‘follow with a tighter frequency of updates‘.

“Moving a launch date is never an easy decision, we know it’s frustrating to have to wait a bit longer for the game, but we truly believe it will mean we can deliver a better launch and overall experience,” said IO.

The game will still debut as a digital release with those aforementioned updates coming throughout the year. A physical release is expected once all the additional content has been created and made available to players.

To give you an idea of the scale, IO has released the following infogram which compares the Paris Showstopper mission to the largest level in Hitman: Absolution. As you can see, it will be six time larger and contain up to 300 targets. 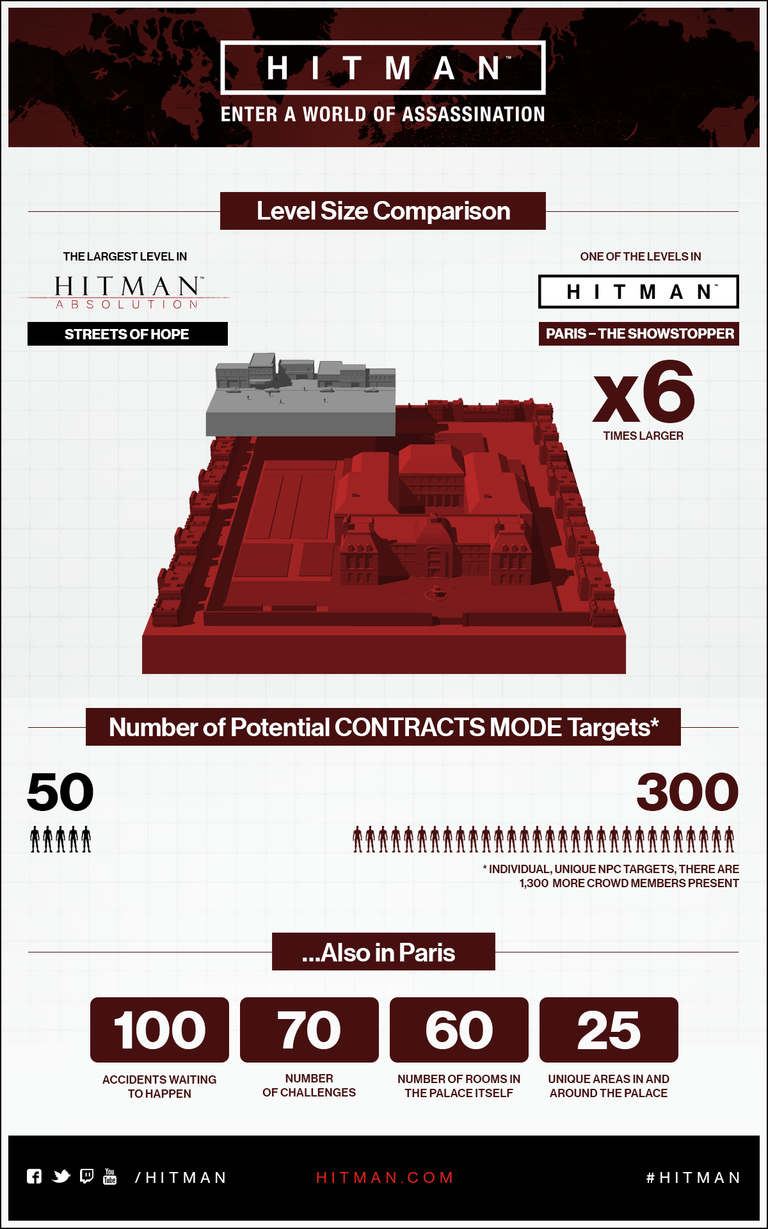 Hitman Agent 47 UK price, pre-order and platforms: How to buy (and play) Hitman at midnight

Hitman Agent 47 is available to pre-order on PC, PlayStation 4 and Xbox. If you want to be playing the game at midnight you should pre-order the digital download from the PlayStation Store or Xbox Store, which will pre-download and be ready to play at 00:01.

The Hitman trailer was shown during Square Enix’s E3 press conference (which you can watch again via the link) but you can watch it right here – over and over again if you like.