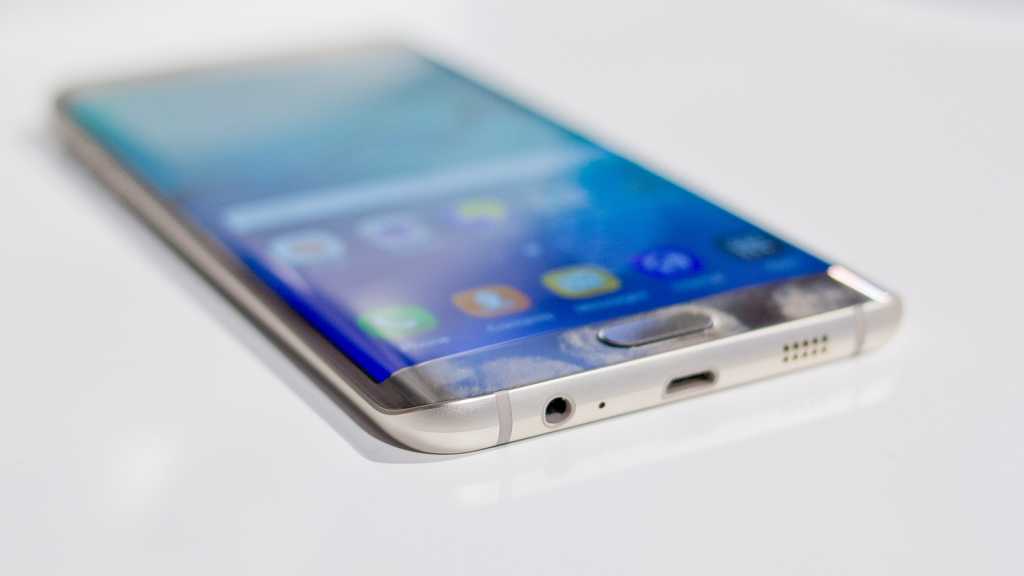 Update: Samsung has slashed the price of the Galaxy S6 Edge+ to the extent it is now cheaper than the smaller original model – details below.

Although it wasn’t announced for the UK, here’s all the details on the Galaxy Note 5 release date, price and specs.

In the UK, you’ll be able to pre-order an S6 Edge+ on 18 August, and it will go on sale on 4 September. In the US, you can pre-order from 3pm local time and get a phone on the 20th August.

EE has already confirmed it will sell the Gold Platinum and Black Sapphire versions of the phone and will offer its Wi-Fi Calling feature with it. Also see: Best new phones coming in 2015. 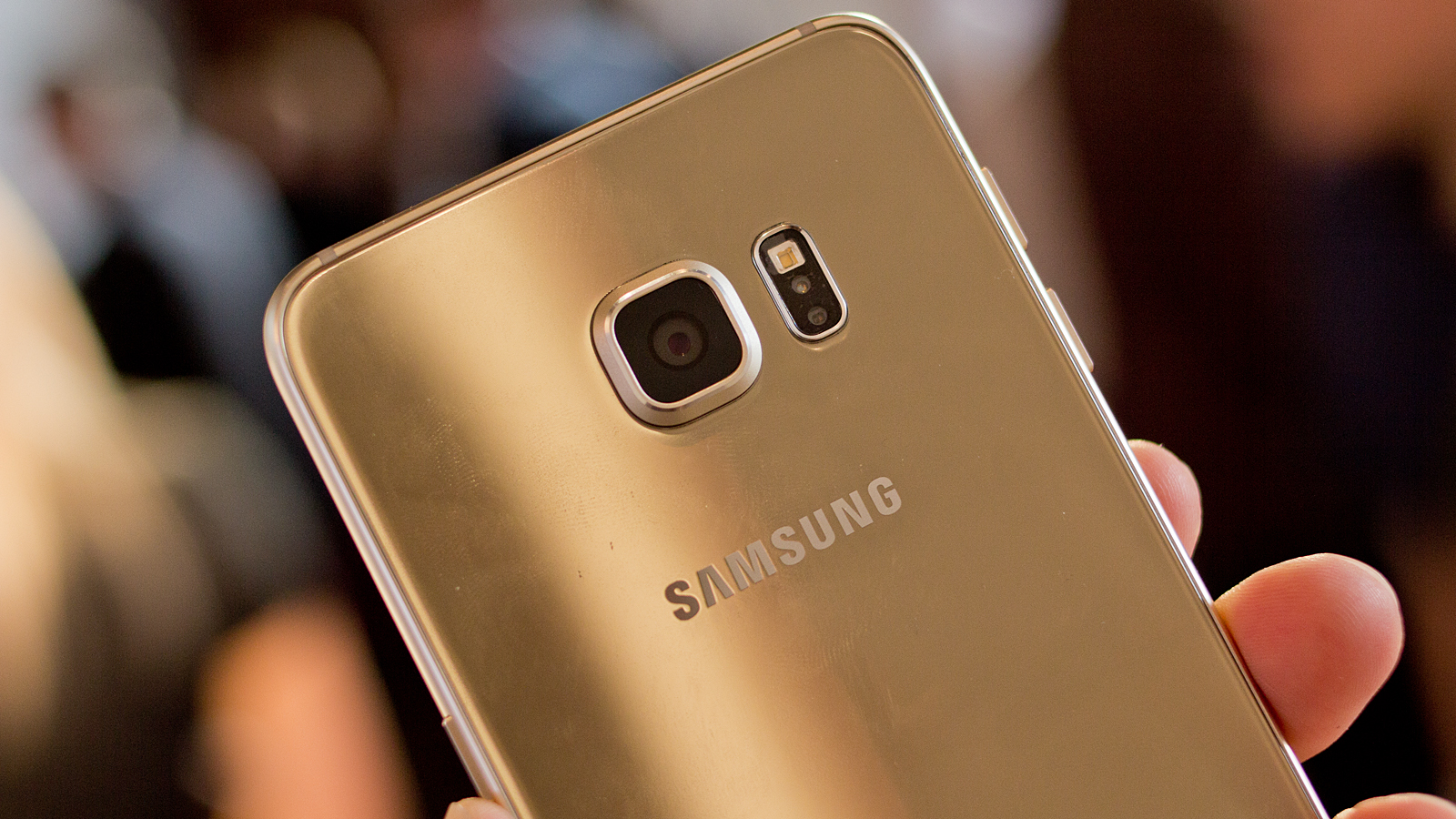 That’s a good price considering Samsung has put the device up for pre-order at £749 for the 32GB model and a whopping £829 for the 64GB option.

Update 21 September: In a dramatic move, Samsung has reduced the price of the Edge+ on its official store to just £599 (£679 for 64GB) so it’s cheaper than the original Edge. This may be a short-term deal but it doesn’t look like it on the store.

If you’re an O2 Refresh customer, you can pay off the remaining bill for your current phone and upgrade to the Edge+ almost immediately. You can recycle your old handset with O2 Recycle and get money back, to help make up the difference.

The Galaxy S6 Edge+ has very similar specs to the Note 5, but the Edge+ has the same double-curved screen as the current S6 Edge. Also see: Samsung Galaxy S6 vs iPhone 6.

It’s bigger of course – 5.7in vs 5.1in, which means that the pixel density is slightly lower as the resolution remains the same: 518ppi to be precise. This is more than enough, and there’s no real need to go beyond Quad HD resolution. 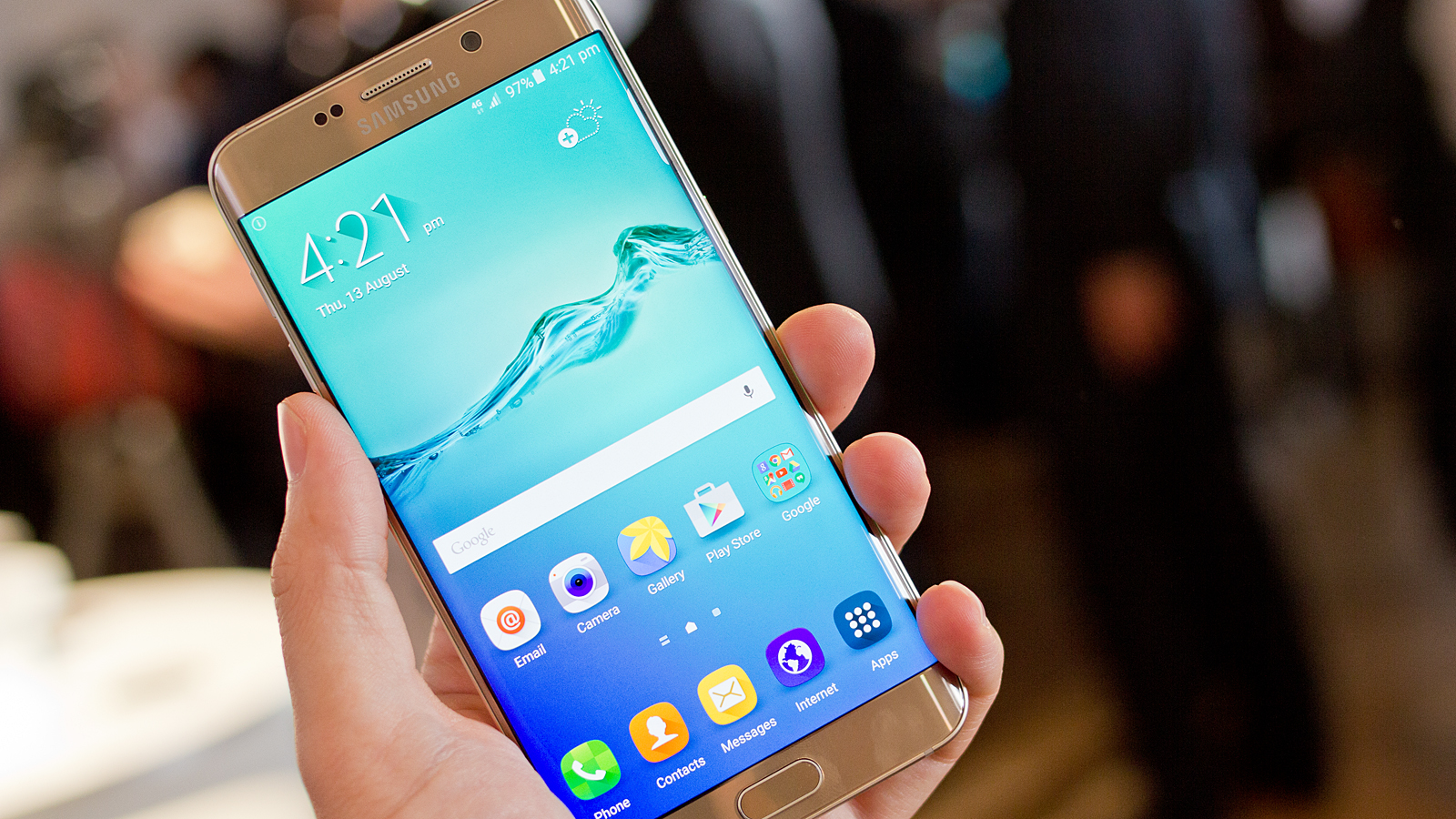 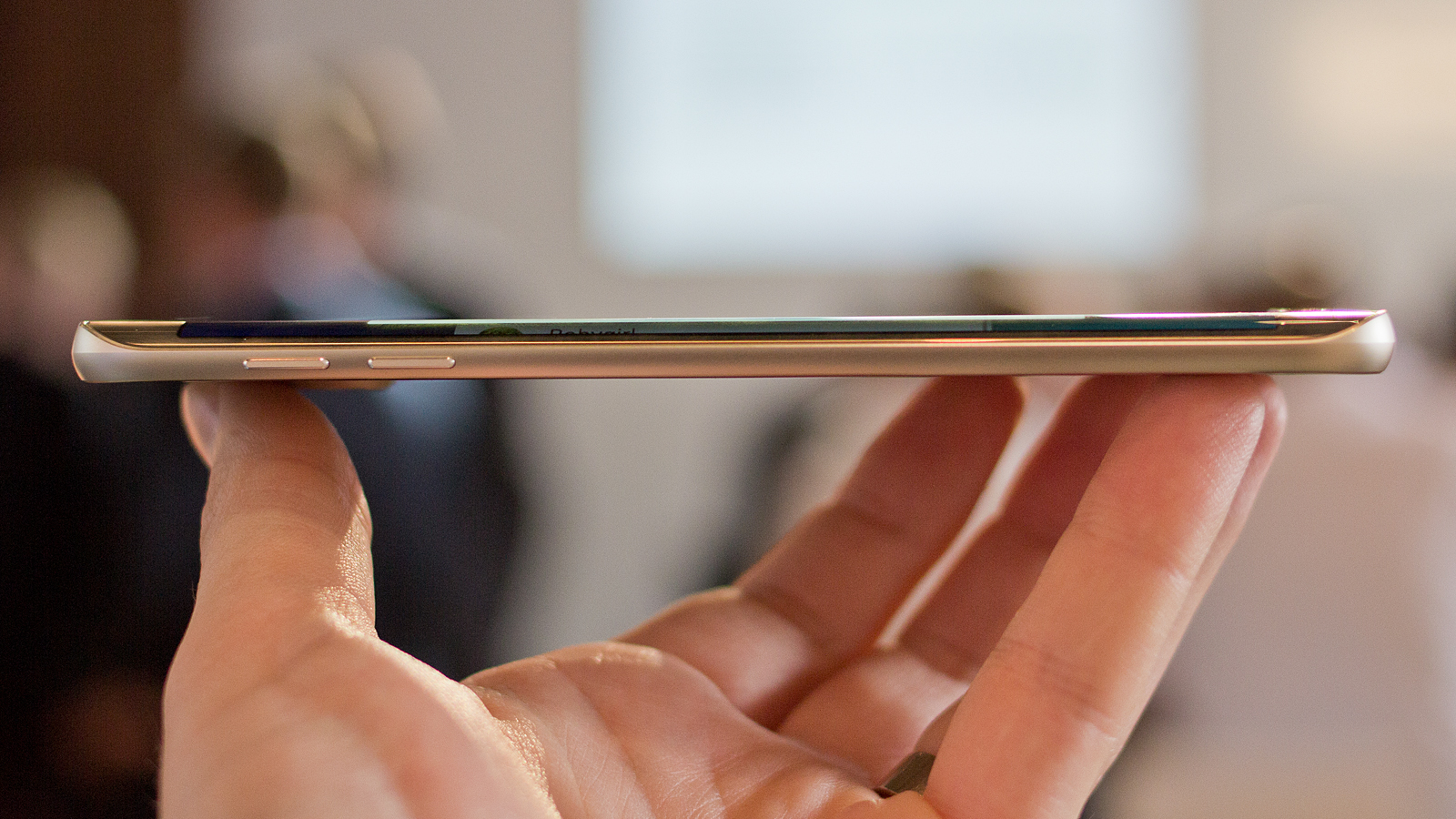 Specs are all well and good, but what has Samsung added to the S6 Edge+? Well, let’s start with what the new handset doesn’t have. The bad news is that there’s no expandable storage. This will push many people to buy the 64GB version, which could be almost as expensive as the 128GB iPhone 6 Plus at £789.

The battery isn’t removable either, but this isn’t nearly as big an issue as having limited storage. 64GB should be enough for most people, but it will be a deal-breaker for others.

It’s impressive that Samsung has managed to keep the weight down: the Edge+ is only 20g heavier, although it is most definitely a phablet now.

Being a Galaxy and not a Note, the S6 Edge+ has neither the stylus (S Pen) nor productivity software you get on a Note. Instead you get the curved screen edges which offer something a bit different. You can see scrolling headlines, a night-time clock, a certain colour when a specific contact calls you and there’s a new People Edge which brings up your favourite contacts when you swipe the top-right corner.

The Edge+ will support Samsung Pay – no surprises there. There’s no launch date for the UK though, so we don’t yet know when you’ll be able to walk into a shop and buy things with your phablet.

One handy feature is SideSync. This is software which runs on Windows and Mac and lets you transfer files wirelessly between your phone and computer. It also works like Apple’s Continuity, allowing you to transfer phone calls to your PC, and play Android games on it too.

Below are the images leaked prior to today’s event, along with rumours of accessories and more. We have photos of the Galaxy S6 Edge Plus shown next to the iPhone 6 Plus and the Galaxy Note 5 (on the left) via iNoob. 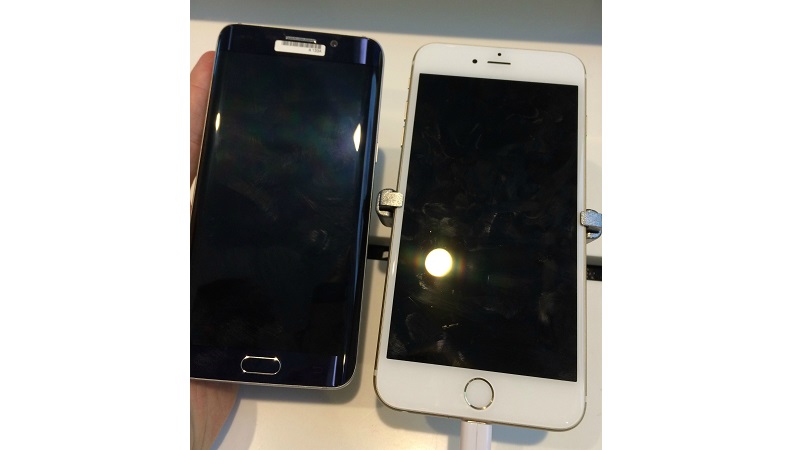 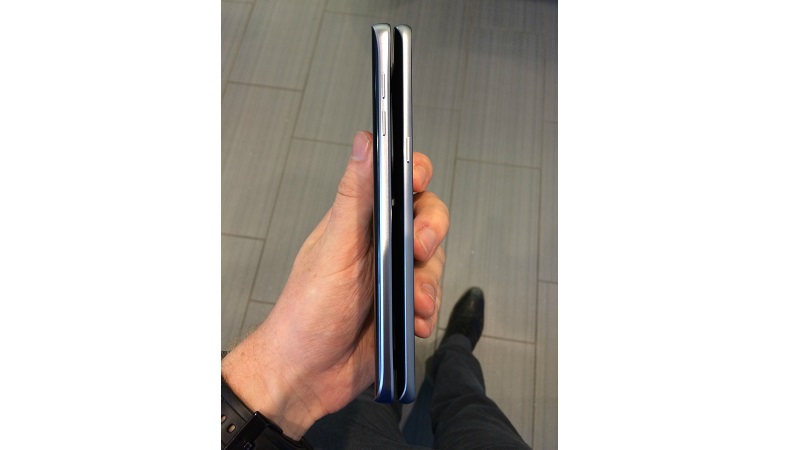 The first of our S6 Edge+ leaked images come from  MobileFun. 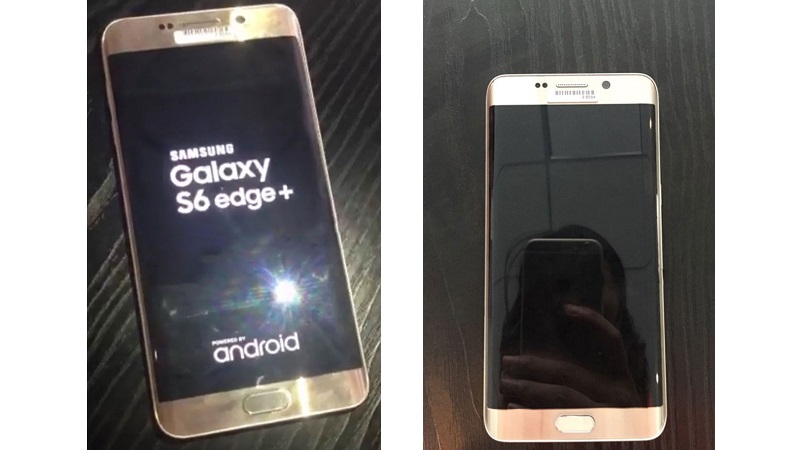 All About Samsung has also posted photos of what it alleges is the Galaxy S6 Edge+, shown here beside the Note 5. Interestingly the date on the screen is 21 August, which adds fuel to rumours that the pair will launch the week following Samsung Unpacked. 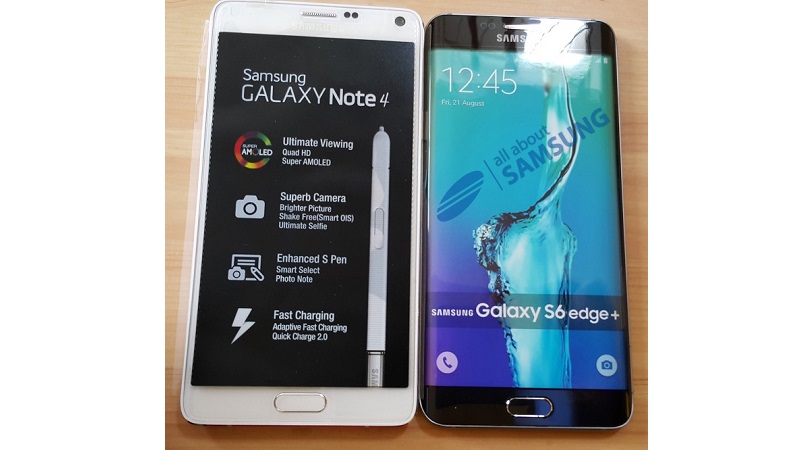