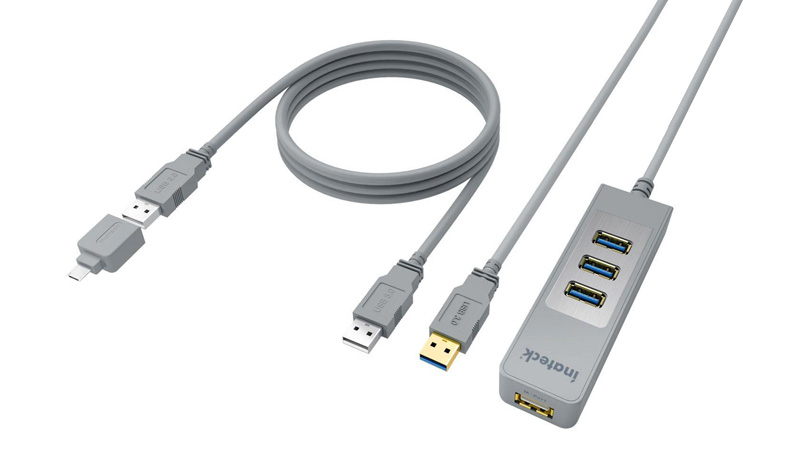 There are several ways to transfer files between PC, Mac and phone, including cloud services such as Dropbox, USB flash drives and external hard drives, but if you’re looking for a simple hardware solution that you can plug in and forget about it then we like this  Inateck HB4009 USB 3.0 hub. Here’s how to transfer files between Windows, OS X and Android. See all How to articles.

In its simplest form the Inateck is a three-port USB 3.0 hub that you can plug into a PC or Mac and gain a couple of extra USB ports. But the HB4009 also has a ‘Magic port’, which allows you to transfer files between Windows, OS X and Android at USB 2.0 speed, share clipboards between PCs, and with KVM support even share a mouse between computers.

Inateck’s HB4009 three-port USB hub is available from Amazon for £25.99. It supports Windows 7 and Mac OS 10.6 or later, plus Android devices with OTG support. An OTG adaptor is supplied in the box, while a driver is built into the hub, so you won’t need to carry any extra software discs or download them from online.

Plug the USB hub into a spare USB hub on a Windows PC. We’re using a Windows 7 laptop, but the Inateck hub also supports Windows 8. AutoPlay will pop up asking what you want to do with the device, so click on Run SKLoader.exe. Also select ‘Always do this for software and games’ so that you won’t have to go through this step each time you use the Inateck. You now have a three-port USB hub attached to your Windows PC that you can use as you would any other USB ports on the laptop. 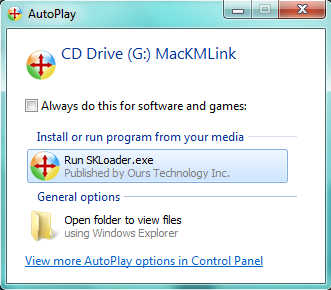 To now connect the Windows PC to a Mac, take the USB-USB cable included in the box and attach one end to a spare USB port on your Mac and the other to the Magic Port at the end of the Inateck.

On the Mac desktop will pop up an untitled drive and a CD icon called ‘MacKMLink’. Double-click the CD icon and choose MacKMLink. Now you’re ready to go. 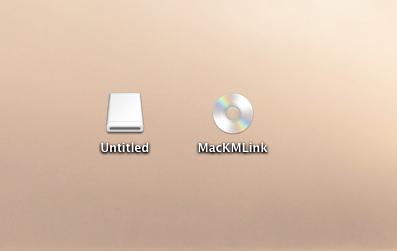 With KVM support we found we could use either the mouse attached to our Mac or the trackpad on the laptop to control either PC. Simply drag your mouse cursor off the edge of the screen and on to the desktop of the other PC. (If you have any problem getting this to work, hit Alt-S to move the cursor to the other screen.)

Mac and PC now share a clipboard. If I copy this sentence on the Mac, I can open a new document on the PC and hit Paste (and vice versa). 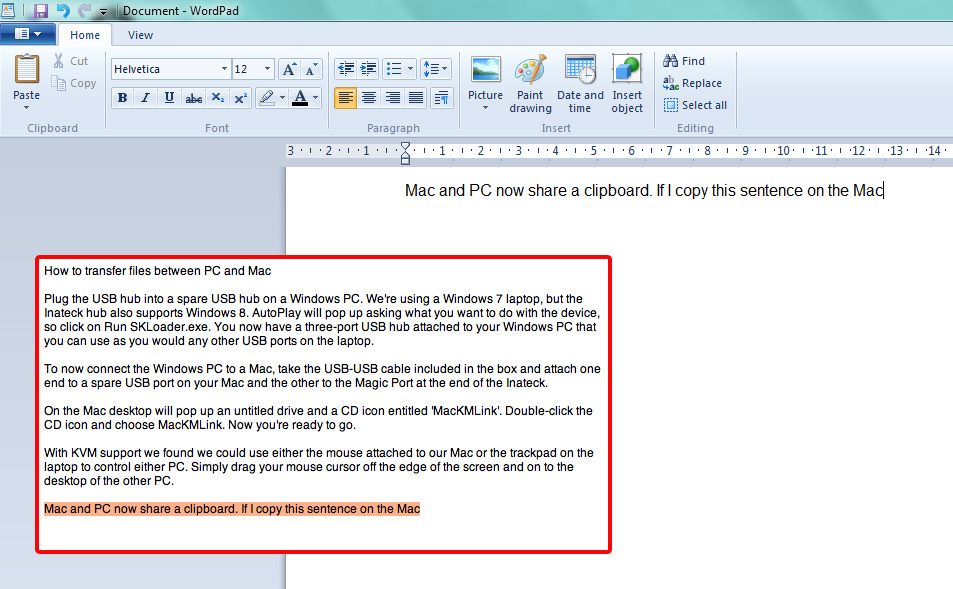 You can copy-and-paste files between PCs in the same manner, or you can simply drag-and-drop them between desktops. This will copy the file rather than moving it from the first machine.

Alternatively, use Go! Bridge. Tap on the MacKMLink icon in the taskbar and select Go! Bridge. This will open a file browser Window that shows your attached device, just as if it were a drive connected to your PC. You can now drag-and-drop files between folders on Windows and Mac. 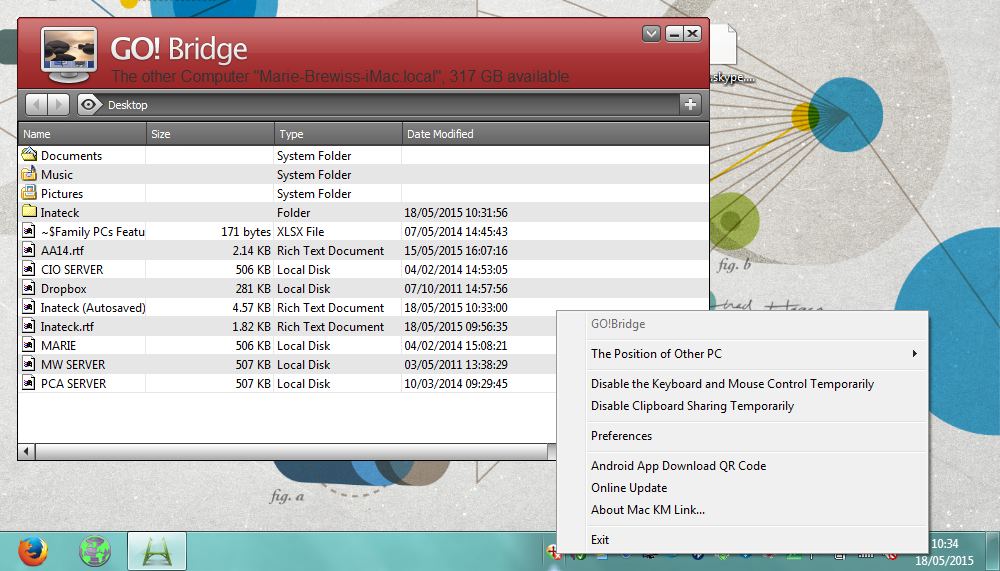 Having followed the above steps to set up MacKMLink between Windows and Mac, it doesn’t matter whether Mac or PC is your host device. If you use the Mac as the host then you can, as before, tap Alt-S to move your cursor on to the PC screen, and you can share clipboards and copy-and-paste or drag-and-drop files. If you want to use Go! Bridge you’ll have to access it from the Windows PC’s taskbar icon, however.

When used with Android the PC or Mac must be the host device. Plug the USB hub into a spare USB hub on a Windows PC or Mac. We’re using a Windows 7 laptop, but the Inateck hub also supports Windows 8. AutoPlay will pop up asking what you want to do with the device, so click on Run SKLoader.exe. You now have a three-port USB hub attached to your Windows PC that you can use as you would any other USB ports on the laptop.

You’ll need to download the free WinDroid Linker app on your Android device. There are two ways to do this, and the easiest is simply to search for and install it from Google Play. Alternatively, you can click the MacKMLink icon in the taskbar and choose ‘Android App Download QR Code’, then use the reader on your phone or tablet to get a direct link to the app download. (If you don’t have a QR code reader app on your device then plenty of free ones are available to download from Google Play.) On your phone or tablet tap the link in the web page and hit OK to go to the file in your browser. Hit OK again to download the .apk file. Drag down the notification bar and tap on the file download, then click Install. Also see: 200 best Android apps and how to install an Android app. 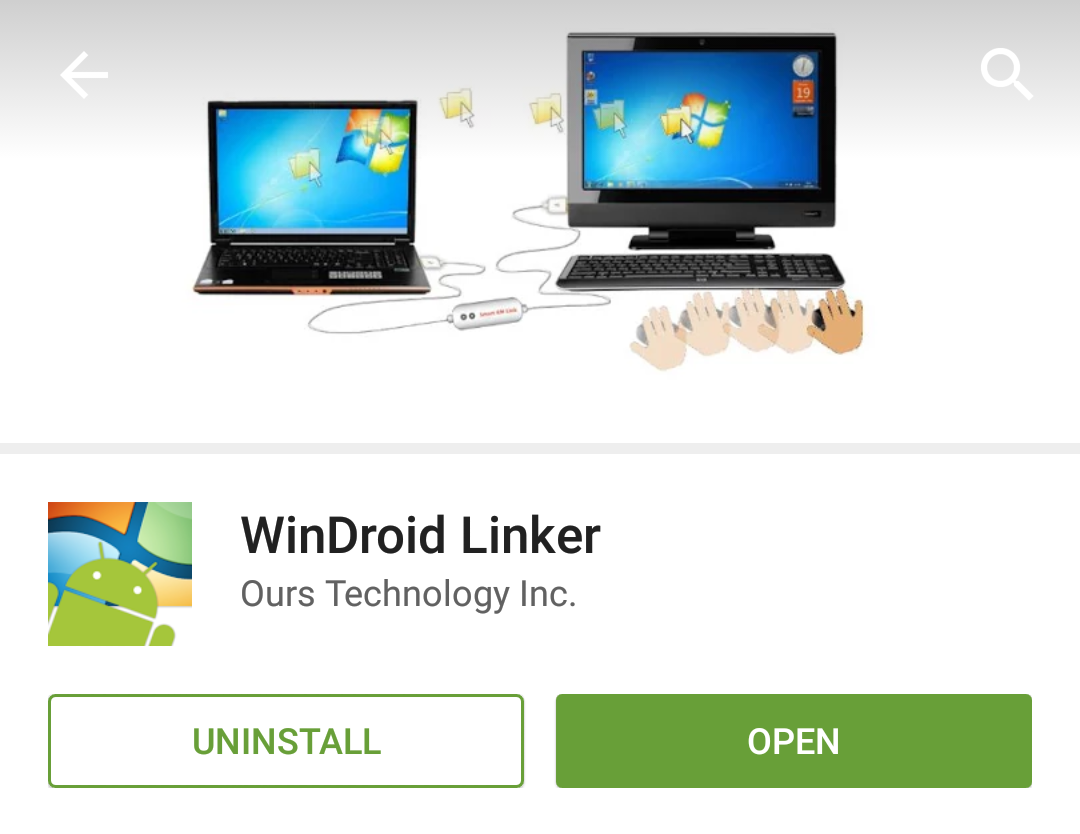 To now connect the Windows PC to an Android device that supports OTG, connect the OTG adaptor included in the box to one end of the supplied USB cable. Plug this end into your Android phone or tablet, and the other into the Magic Port at the end of the Inateck hub. 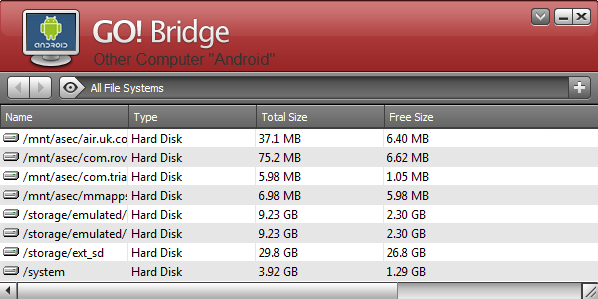 You can also use your PC or Mac keyboard and mouse to control your Android device – just hit Alt-S on the PC’s keyboard to switch screens. The mouse cursor will then appear on your Android. 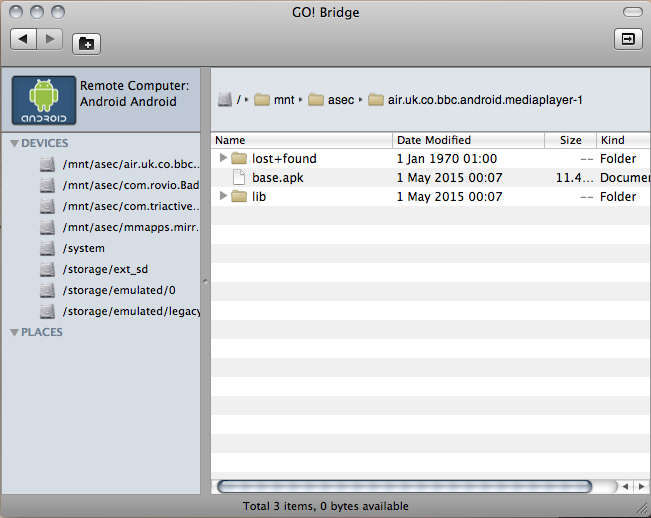