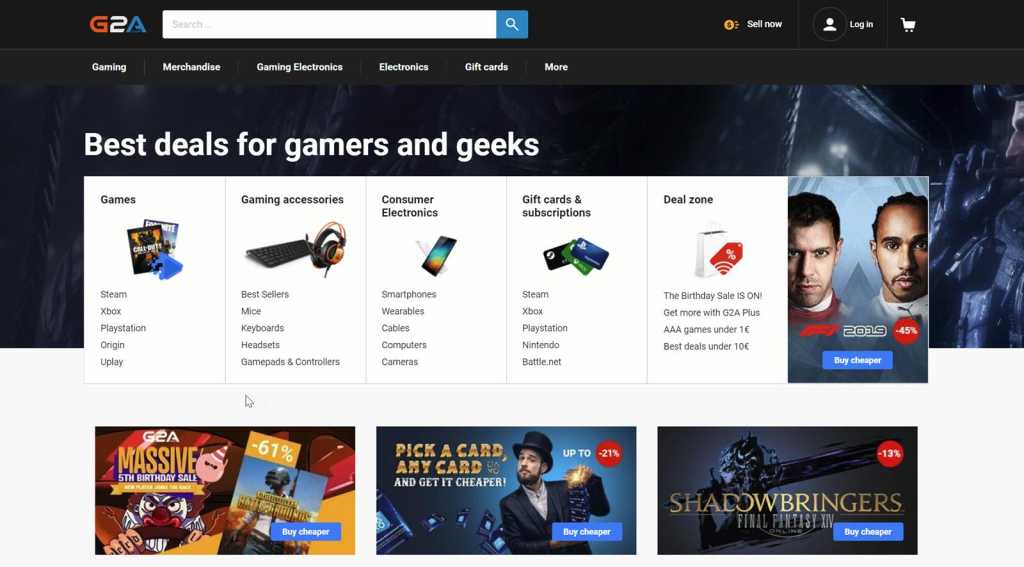 If you saw a website offering heavily discounted activation keys for software, you’d be right to be suspicious. In this day and age it’s tricky to tell scams from legit businesses, and many people ask us whether it’s safe to buy games from G2A.com. So is G2A safe? Here’s what we know.

How does G2A work?

G2A.com is a website that – like Gumtree or ebay – brings together buyers and sellers of grey-market game keys for PC games and activation codes for PSN and Xbox Live credit, as well as codes for other software, gift cards and – these days – even gaming hardware.

To be clear, G2A itself does not sell game codes, at least not that we’re aware of. It is purely a marketplace where people can sell game codes. What you do is buy your key, wait for it to be emailed to you, then head to the relevant platform: Epic Games Store, Steam, Uplay, etc, log in and select the option to activate a game. You paste in your key and then download the game files from the platform’s servers – not G2A’s.

How, then, can the codes be so cheap, you ask. The answer lies in the fact that game prices vary from country to country, according to the average salaries. Sellers purchase activation codes in the cheapest regions with the aim of selling them to buyers in the most expensive. This makes them – and G2A – a profit, while gamers get to make a saving on the usual street price.

G2A adds steps to prevent fraud. Sellers have to verify their social media details and phone numbers, and are limited to 10 transactions before having to provide extra verification. Its aim is to prevent dodgy sellers from scamming buyers with non-working game codes.

Here are our tips on buying games and other software safely.

However, game developers do not like G2A. Some have even taken to Twitter to tell gamers that if they cannot afford to pay the full price for their games, it would be better to pirate the game than buy it from G2A. These statements are extreme because the developers say that they don’t get paid a penny when a game is sold on G2A and that the codes are often obtained by fraud, not by legitimately purchasing them. You can read more in this blog post from Mode 7 games.

For example, G2A has admitted that through the marketplace it sold almost 200 stolen keys for the game Factorio, so so has paid the developer Wube $39,600 in recompense. Still, this is a rarity, and most codes sold are legitimate.

This is also why it is a risk to buy these grey-market codes: they may work initially, but the code might be rendered invalid if the developer discovers and blocks fraudulent codes. Essentially, G2A isn’t an authorised reseller, and so you could say it is not legit.

Knowing what we know, we wouldn’t buy games from G2A – we would support the developers by purchasing them direct or from a legitimate reseller such as Steam.

G2A.co is the company’s corporate site which explains the business model in more detail. It was set up by a group of enthusiastic gamers in Hong Kong with the aim of “providing the best digital game licences and retail service to all our partners and customers”. Unlike some companies which hide their contact details, G2A is happy to publish phone numbers and addresses: they have their headquarters in Hong Kong and a support office in Poland.

The game keys are offered by ‘marketplace sellers’, i.e. third parties who have keys to sell. These could be private individuals who have bought a game, but decided not to activate their key, or businesses who have bought keys in bulk in regions where they’re cheaper. They can also be keys which have been obtained through false key requests, and are effectively illegitimate.

Is it safe to buy from G2A?

G2A used to add ‘G2A Shield’ to your shopping cart when you add a game. Now, though, it offers a money-back guarantee with all purchases in case “something goes wrong and the seller doesn’t want to help you out even though they should.”

And it adds an ‘Order fee’ of around 10% which is one way that it makes money.

So the price you see is the base price, excluding G2A’s Order fee and any payment fees for using one of the many payment methods. So factor this in when comparing prices on Steam, Amazon or any other authorised reseller.

We checked out a good selection of gaming forums to see how many people were complaining about G2A. When we did, we found that people who’d actually purchased games said they’d received keys in just a few minutes and that they were genuine and valid.

Others pointed out – quite rightly – that it was the same as buying products on the grey market and that the codes could be revoked by game publishers at some point in the future. There were many more who had had a bad experience and either not received a key, or a working key and had been refused refunds.

We asked the following questions to try to clarify how G2A works. The answers are from various G2A employees, with some questions being answered by more than one person. We have not edited the answers.

1. Where do the sellers of the game keys get their codes from?

The major part of sellers on our platform are running their own businesses and obviously, that is their own company ‘trade secret’. G2A is a marketplace and in order to provide best service, we screen all sellers. We also provide reviews of each seller/merchant so that buyers can check the background of the seller before making a final decision.

2. Are the sellers private individuals or businesses?

Everyone can sell on G2A.COM so we have all types of sellers: from private persons, games distributors, game developers and wholesale sellers. There are more than 50,000 sellers on G2A Marketplace.

We’re also preparing tailored solutions for game developers and publishers (including Indi developers), to give them a very special spot on G2A. Some of them are already selling on our marketplace and getting great results.

3. How can they sell them so much cheaper than on Steam, Uplay or on Amazon?

If you are buying games on special promotions you can even get 90% discount so you are able to ‘sell the games on’ cheaper. If you are a big seller you are high in the chain of games suppliers and they give you good prices.

G2A.com is a global solution and the global market is much bigger than can be imagined. G2A brings many brilliant opportunities for local sellers and buyers to trade their digital products globally

4. Are the codes from gamers who have played the game and are now selling it on ‘second hand’ or ‘used’?

If we’re talking about activation codes for games, you’re able to use just once and it’ll bind to your account. That means you’re not able to sell it anymore.

There is no possibility of trading a game-key that has already been activated. However in the gaming market there is quite a flourishing trade in games in boxes “on second hand”. This case does not concern G2A because on our platform you can buy and sell exclusively digital products.

5. Most game codes, such as Steam or Uplay, are bound to an account and cannot be ‘de-registered’ and then sold on. Is that correct?

There is a way to deactivate the game from Steam, Uplay or Origin account but if you do this, you won’t be able to activate the same code again.