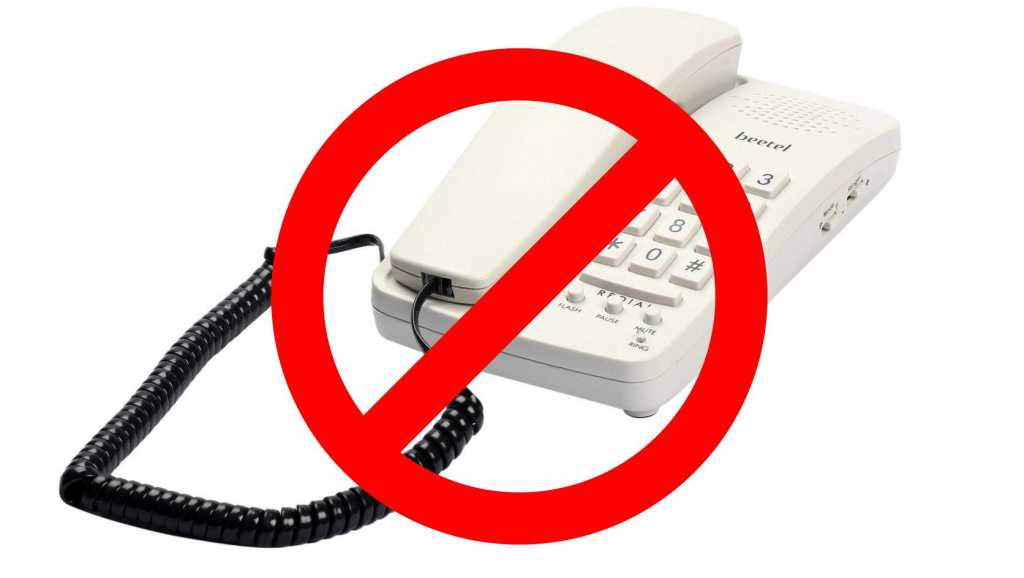 Landlines are so last century. You probably make most of your calls on your smartphone and use messaging services such as WhatsApp to keep in touch with friends and family. Video calling is easy and ‘free’, so you can talk to distant relatives using WhatsApp, Skype or FaceTime.

So why do we still pay £20 a month for a landline phone that few of us use and even fewer actually need? Doesn’t it feel like a waste of money to be paying for this on top of your monthly broadband subscription? Isn’t it just a con that you can’t get internet with some broadband providers without being forced to pay for line rental on top?

Well, we’ve got news for you. You can stop paying a line rental fee right away – so long as you’re happy to change your broadband provider. If you’re not tied in to an ongoing contract which has penalties for ducking out early, you can look again at the alternatives to traditional ADSL. We’re talking satellite, fibre, cable and the new 5G network.

These alternatives give you internet without also demanding that you sign up for a phone line you may well never use. Shop carefully, though, as while such connections are often faster, they aren’t always as cheap as you might expect.

Put simply, you might well find that it is cheaper to get internet even if you have to pay the line rental charge. Use our deal finder below – click the ‘Broadband only’ option – to see what you can get in your area, but read on to find out more about the different types of package, and their pros and cons.

If you’ve spotted those triangular plates in the street bearing the acronym CATV there’s a good chance you’re living in one of Virgin Media’s cabled area, but enter your postcode on Virgin’s site to be sure.

Virgin Media’s ‘slowest’ connections start at 50Mbps (£37 a month / £479 annually including activation, rising after the first year) and top out at a whopping 350Mbps (£40 a month / £515 for the first year including activation). Of course, there’s no point getting the most expensive package if you won’t be able to get those sorts of speeds in your area, and 50Mbps should be plenty for most people. 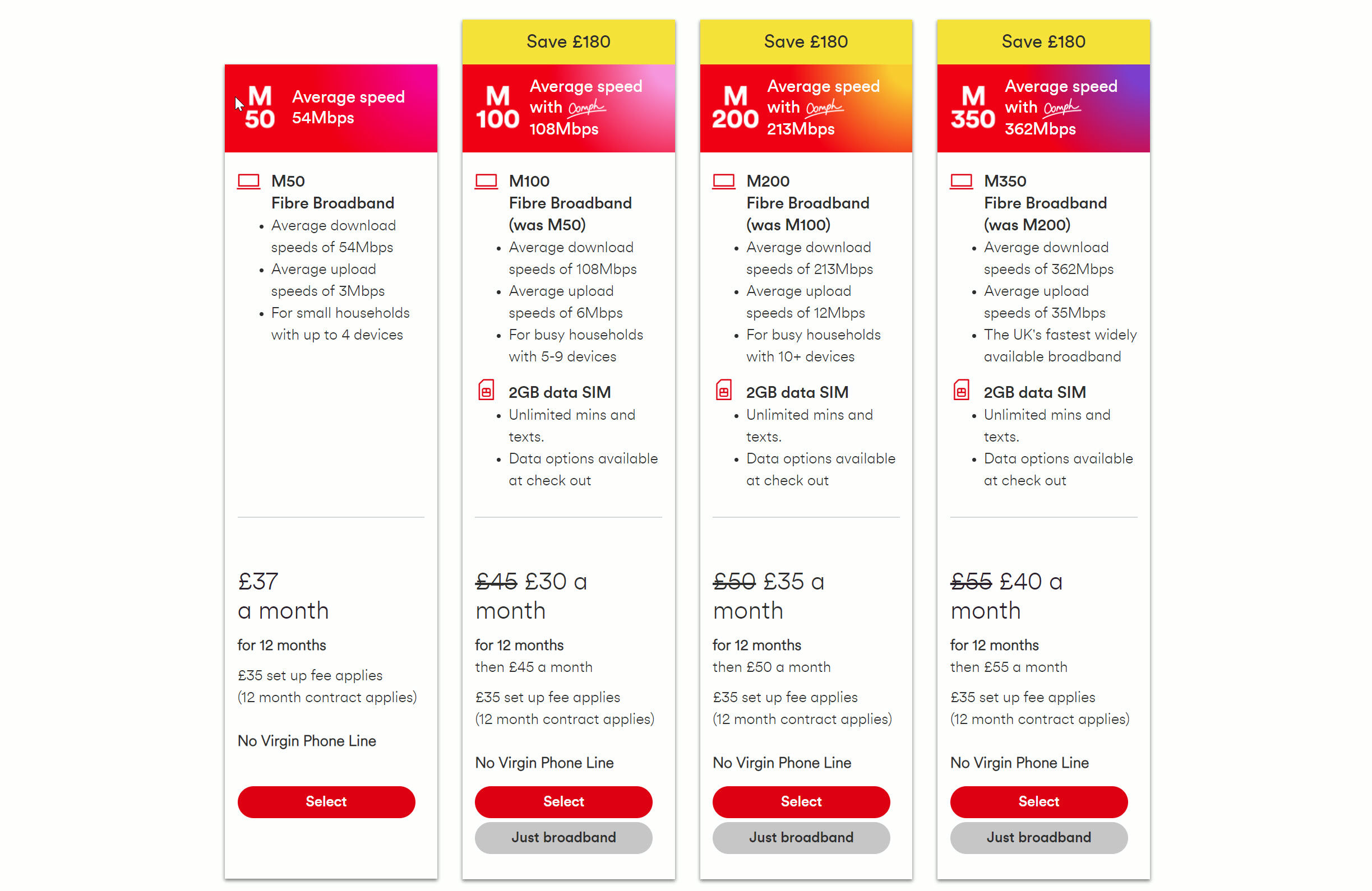 None of them require a landline, however signing up for one does reduce the cost of the broadband. For example, the cheapest 12-month contract including a phone line is just £27 per month. But this rises to £49per month after the first year.

For the sake of comparison to a traditional broadband provider, Plusnet’s unlimited Fibre package, with download speeds of around 36Mbps, costs £19.99 a month for a 18-month term. That includes line rental and with the £5 activation fee, works out at a grand total of £446, or just £299 for the first 12 months. That’s a lot cheaper than Virgin’s best offer.

Mobile broadband is by far the most flexible option, as you can use this wherever you go. Just be wary of the fact that 4G isn’t available everywhere and performance will vary from place to place. You will find your phone stepping back to slower 3G – or worse – as you travel around. Fixed 5G is brand new, but it is by far the most suitable choice for a home broadband replacement.

The problem is that coverage is extremely limited at the moment, so chances are it isn’t available in your area.

We’re not talking about mobile phone contracts here: we’re talking data-only packages which are aimed at replacing your usual broadband.

For example, there’s the 4GEE Home Router, which will provide a similar signal to what you can expect on your phone. With EE at the forefront of 5G investment, a new  5GEE Home Router is coming, but you’ll have to be patient as phones will probably be prioritised.

Vodafone now offers its 5G Gigacube. The unlimited plan costs £50 per month with a £50 upfront cost, but you’re tied in for 18 months. if you’re not ready to commit long-term, there’s also the option for a 30-day rolling contract at the same monthly price, but the router itself will now set you back £325. Again, coverage is very limited, so you’ll need to live in the right place to get it. 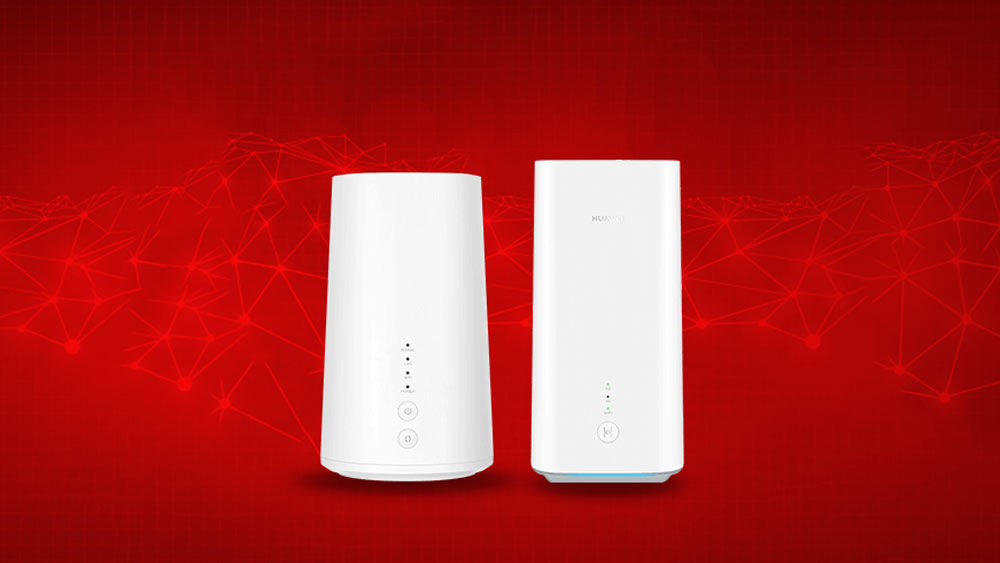 Three also offers Home Broadband (formerly called Relish) with its Indoor Hub which as you might have guessed, isn’t designed to be portable. It offers 12-month contracts at a flat rate: unlimited data £22 per month, with no upfront cost. You can also get a rolling 30-day contract for the exact same rate, though you’ll have to pay £70 for the hardware.

Three’s service uses 4G and coverage is limited to central London and a few outlying areas.

Right now, 4G and 5G home broadband is expensive and only available in specific areas so is only worth it if you just don’t have access to Virgin or ADSL in your area.

Ten years ago, satellite broadband would have been your only option if you lived far away from a major town or city, but as access by traditional means has gotten both faster and more comprehensive it’s now just one of several choices for most of us.

At the budget end, Bigblu’s entry-level service gets you 10GB of ‘priority’ data with downloads averaging 12Mb/s.Once that’s used up, you get unlimited data at an average of 7.8Mb/s.

This costs £24.95 a month, with an initial connection fee of £49.99. The price may be tempting, but neither the speeds nor the cap compare favourably with ADSL.

Satellite might save you the cost of a landline you’ll never use, but unless you live in one of the increasingly rare spots where reliable broadband still isn’t an option, it’s struggling to compete in the speed versus value equation.

Fibre to the premises

Perhaps the most exciting of all the options is fibre to the premises – FTTP. We’re not talking about BT Infinity or Virgin Media here, but a dedicated fibre line running directly to your router.

Hyperoptic offers synchronous connections up to 1Gb/s flat out. That means that there’s no difference in the speed of uploads and download the way there is with ADSL. It’s worth pointing out though that you won’t be able to enjoy those speeds over Wi-Fi – only wired devices will be able to make the most of the 1Gb/s connection, and only if your home network is properly equipped with gigabit cabling and hardware. 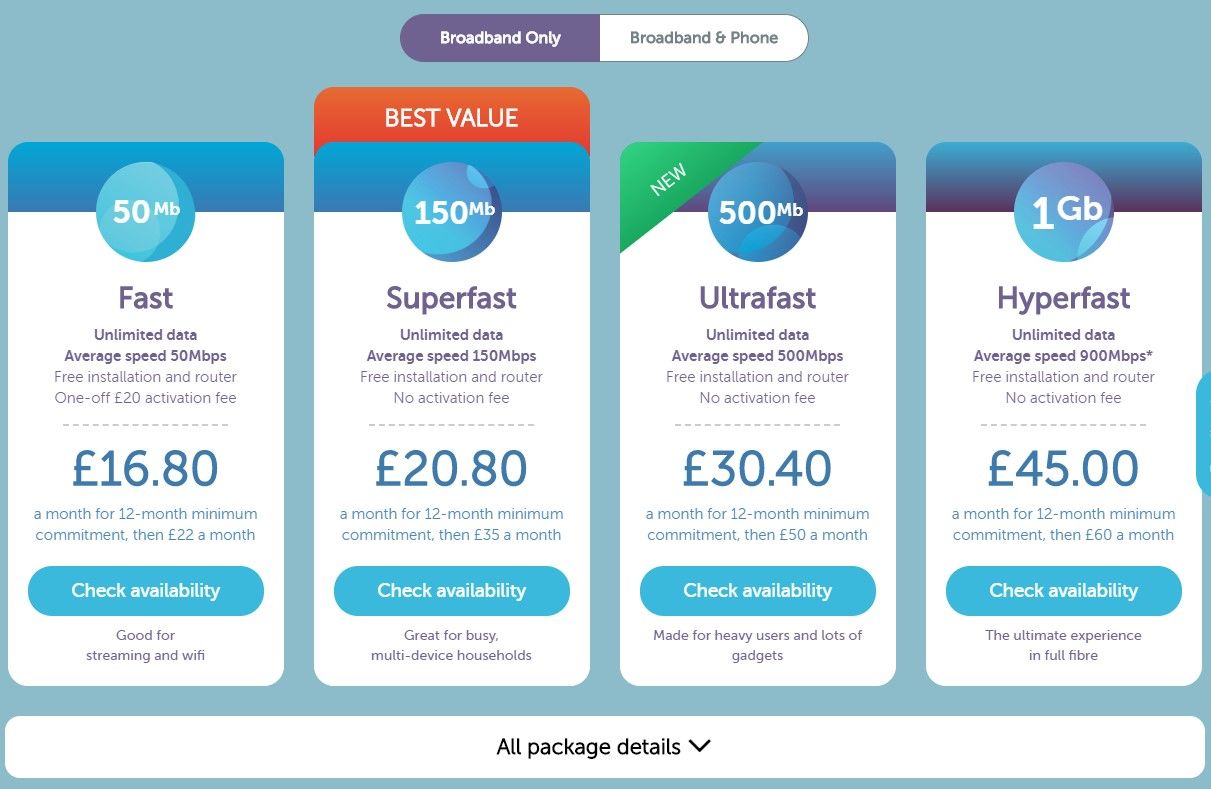 At the top end of the scale, then, you’re looking at a year one cost of £540 – roughly what you’d be paying for the 350Mbps deal with Virgin Media, while enjoying far higher speeds. The other packages all offer excellent value for money.

But there is a catch.

Because it’s building its own fibre network, Hyperoptic is concentrating on multi-dwelling buildings and, requires enough residents to express interest in the service before it will commit to installing anything.

Its service is installed in 100,000 homes spread across 1,000 buildings, and if yours is among them you’ll already know. If it’s not, and you live in a block of flats, your best bet is to enter your postcode on Hyperoptic’s site, fill in the form to register your interest in the service and get your neighbours to do the same. If you live in a terrace, semi or detached house, though, don’t get your hopes up just yet.

Are landlines a necessary evil?

So it’s not as clear cut as you might think. Yes, a lot of us are paying for landlines that we don’t use, and that hurts, but the alternatives aren’t always better value for money.

Fibre to the premises is the fastest option since it’s 21st century technology all the way from the exchange to your router, rather than fibre to the cabinet in your street, and limiting copper (which can’t push downloads beyond 76Mb/s) from there to your house.

Cable has better coverage, and again it’s faster than ADSL at present, but it’s not been rolled out everywhere. And then there’s 5G, which is promising gigabit speeds, but as with FTTP, unless you’re in central London or live in the middle of one of the UK’s bigger cities, you’ll probably find you can’t actually get it.

Which brings us back to traditional ADSL. It doesn’t make the line rental any easier to swallow, but at least you can console yourself with the thought that your landline fee is paying to maintain the line from your house to the nearest box on the street. In that respect you can think of it as a digital standing charge, like the one you pay to hook up your home to the National Grid, the gas lines and the water supply – or, indeed, the Vehicle Tax you pay to drive your car on the road.

And if there’s one small consolation, it’s that most ASDL providers now combine broadband and landline costs into one price so it’s easier to see what you’ll pay and compare that with other services.