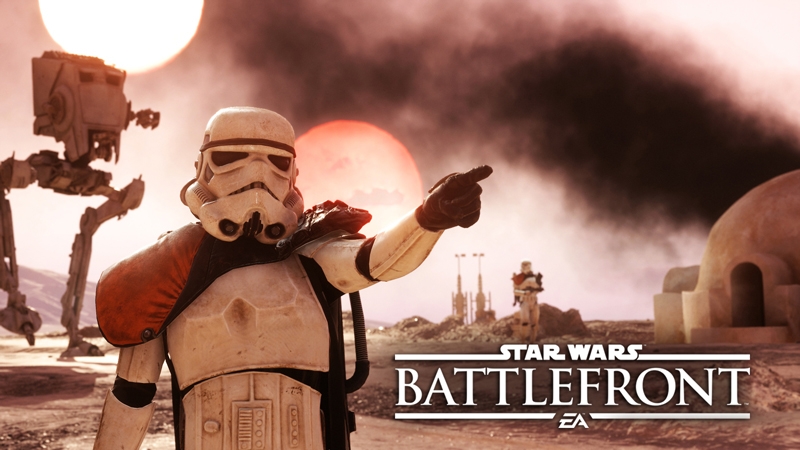 So, how can you get your hands on the utterly brilliant Star Wars Battlefront? First things first, we should address the platforms it’s available on; PS4, Xbox One, and PC users can all purchase Star Wars Battlefront right now, although PS3, Xbox 360 and Wii U customers aren’t so lucky – the game isn’t available on any other platform, with no plans for support in the future.

But if you’re one of the lucky ones that have a compatible console and hasn’t yet played the game, you’ll be happy to know that it’s substantially cheaper than when it was first released back in November 2015. Let’s start with those for Xbox One – if you’re looking to buy the standard edition, you’ll find it for £49.99 at GAME or slightly cheaper at £31.58 on Amazon. It’s a similar story for the PS4 too, as the standard edition will set you back £49.99 at GAME or even cheaper at £29.05 on Amazon.

PC users can grab the standard edition on Origin for £49.99, but they’ll find it cheaper over at Amazon at £29.97. If you’re in the market for a new gaming PC, take a look here:  Best gaming laptops and best gaming PCs.

Star Wars Day: May the 4th be with you – free Battlefront trial for PC

To celebrate Star Wars Day Electronic Arts is offering a four-hour (cumulative) trial of Star Wars Battlefront on PC, to be downloaded from Origin on 4 May.

Those who already own Battlefront will receive 4444 in-game credits when they log in on May 4th, and there will be a new Hutt contract: “Jabba the Hutt has a new challenge waiting for all Star Wars Battlefront players on May the 4th! Spend 3500 to 8000 credits and complete bounties to unlock the powerful Bacta Bomb Star Card which provides a health boost to you and your allies,” says EA.

EA outlined its plans for Star Wars Battlefront DLC and expansion packs for 2016 (and beyond) back in January, and we will see four DLCs in 2016.

We’ve already seen Outer Rim, which became available in March, and the next DLC will be Star Wars Battlefront Bespin, which will become available in June.

“We’re taking players in and around Cloud City, with four new maps for all of our most popular modes. You’ll see AT-ATs in Cloud City, take to the skies in Fighter Squadron, and even spend time in a carbonite chamber. Of course, we’re also adding more blasters and Star Cards, a new game mode, and two new iconic characters we’re really excited about – Lando Calrissian and the cold-blooded bounty hunter, Dengar,” writes EA, which confirms that over the coming months we’ll see new in-game events, new Hutt contracts and more new content.

So, what can you expect from Star Wars Battlefront in terms of gameplay? Developers EA DICE spent a lot of time focusing on the online gameplay, which, in our opinion is phenomenal. Players find themselves traversing planets from the original Star Wars trilogy including Hoth and Tattooine, along more recent environments including Jakku. How you navigate the world is down to the game type you choose – you can get around on foot as you’d imagine, but you’re also able to jump in either land-based (AT-AT’s) or air-based (TIE fighters) vehicles to keep gameplay interesting.

All battles take place on planets whether air or ground based, so those hoping for all out space war may have to wait for No Man’s Sky to be released later on this year. With that being said, there are a number of different game modes that should keep you entertained for hours on end, as it did for us.

The game lets players choose between the Rebels or Stormtroopers when in battle, although there aren’t any immediate benefits/drawbacks to either faction. That is until you start to use Heroes (Hero power-ups spawn randomly, not generated based on performance), where some may argue that the Dark Side offering is more powerful than that of the Jedi, featuring huge names including Darth Vader and Emperor Palpatine. Online gameplay features up to 40 players in a single match, and there are 15 different maps to choose from between the different game modes.

It seems we’re not the only ones to think this, as Star Wars star John Boyega recently took to Twitter to ask EA if the company had any plans to bring an offline story mode to the hugely popular Star Wars Battlefront. The star tweeted “ @EAStarWars Will fans get a full on offline story mode? It’s more of an enjoyable way to learn controls.” And while EA must get tweets like this all the time, it’s not usually from the star of the movie the game is based upon.

EA replied asking if Boyega had tried the offline missions, but it seems the star wants more: 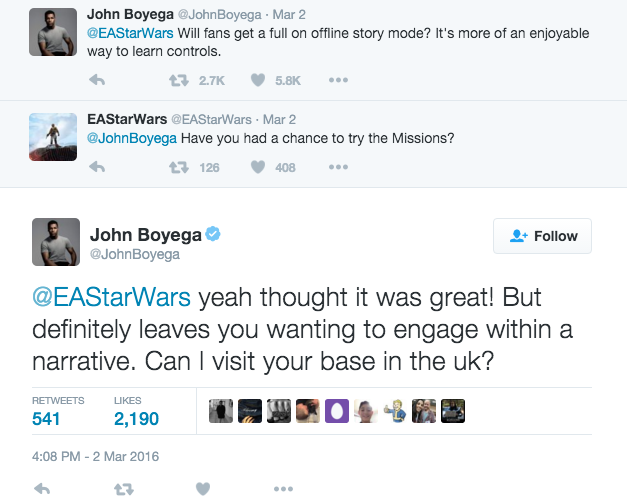 The EA UK account tweeted back “sounds like a date,” which suggests that Boyega will be visiting the UK HQ at some point soon. Let’s hope that he can get something made, although it has been suggested that campaigns are expensive and not as popular when compared to multiplayer content these days, which if true means that even if the star of Star Wars makes an appearance, we won’t be seeing it anytime soon.