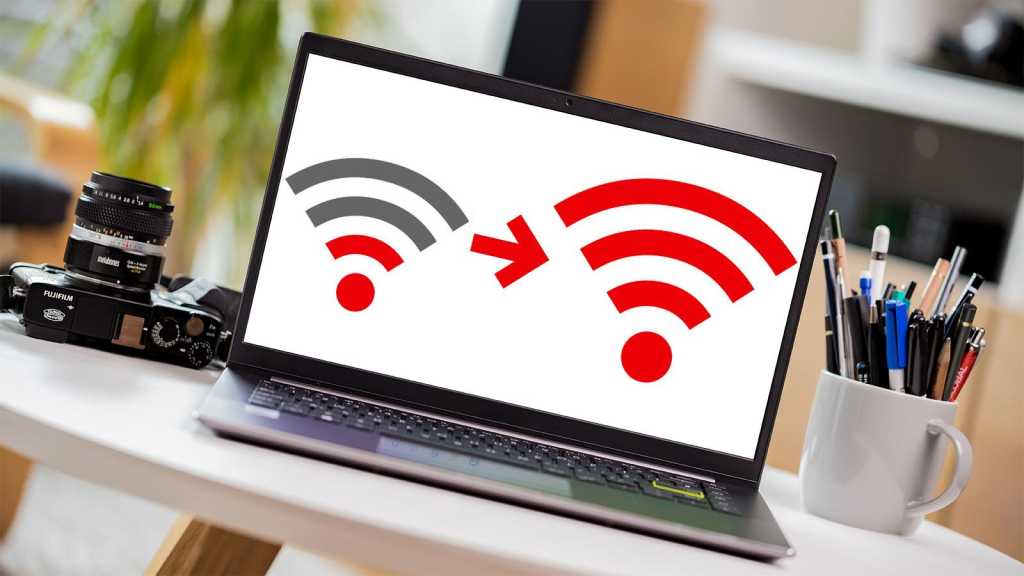 Wi-Fi is just as essential as running water for many people, especially those who work from home. So when it’s slow or keeps dropping out – and ruining your Zoom call or interrupting your Spotify stream – it can be very frustrating indeed.

Your situation may be even worse than this: no signal at all in some parts of the house, or such a weak connection that it’s not good enough for loading a web page, let alone checking who’s at the front door via your video doorbell.

These Wi-Fi ‘black spots’ are most often caused by too much distance from the wireless router (wireless signals weaken with range), thick brick or stone walls, and interference from other devices.

There are several ways you can fix this, but it all depends upon how much money you want to spend and where the problem areas are. Here are the main six ways to extend your Wi-Fi:

Now let’s look in more detail at each of those options.

If your house suffers from weak Wi-Fi upstairs, check the placement of your wireless router. Make sure it’s out in the open (even if it is ugly) and in the centre of the home if possible, free from obstructions.

Don’t hide it in a cupboard, on the floor or behind your TV. try to elevate it because Wi-Fi signals have an easier time traveling through open space.

Does your router have movable aerials? The Wi-Fi signal beams out from the sides of the antenna, and up (perpendicular to the router) is usually best so the signal doesn’t shoot into the ground or ceiling. However, if you have multiple antennae, you can try adjusting them to different angles to provide the widest coverage.

2. Upgrade to a better router: look for WiFi6

If the weak or slow Wi-Fi continues despite moving the router, consider upgrading it to a better one.

A WiFi 4 or WiFi 5 router can communicate with only a certain number of devices at once, so the more bandwidth-hungry devices you have, the slower your network will work.

Another boost in busy places is a technology called ODFMA (Orthogonal Frequency Division Multiple Access). Using this, WiFi 6 allows one transmission to deliver data to multiple devices at the same time.

We’re seeing WiFi 6E support being added to the latest devices—for example, Apple’s M2 iPad Pros—and WiFi 6E routers are available but very expensive right now. WiFi 6 should offer enough advances for most of us at this time.

Why not be cheeky and ask your ISP to send you an updated wireless router? If you’ve been a customer for a while it should help you out, but watch out if it asks you to sign up for a new contract.

A common misconception is that the latest Wi-Fi standard gives you the best performance and range. While that is partially true, the best speeds come at the expense of range, so you’ll actually get the best coverage from a router with really good performance using 2.4GHz, not 5GHz.

However, this is where mesh Wi-Fi comes in, and it’s why we highly recommend you invest in a kit, which can cost less than a single router in some cases.

Remember that your devices also need to support these newer Wi-Fi standards. But rather than buy a new laptop you can buy a USB wireless adapter that plugs into a USB port. The Ugreen AX1800 is an affordable WiFi 6 dual-band wireless adapter, available from Amazon or AliExpress. Sorry, Mac users, it is a Windows-only product.

You can also add a new wireless adapter inside a desktop PC’s case or via a PC Card slot, but good luck trying that with a Mac!

We’ve also got a separate guide with tips on how to speed up Wi-Fi.

In case you skipped the intro and scrolled straight to here, a mesh network is two or more routers that work together to provide much wider Wi-Fi coverage than a single router can ever deliver. It replaces your existing router’s Wi-Fi, and is easy to set up.

You attach one of the units from a mesh Wi-Fi kit to a spare port on your existing router, and it creates a new Wi-Fi network to which all your Wi-Fi gadgets connect.

You then place the second (and third if required) mesh device somewhere else in your house—usually on another floor, or on the other side of your home. The devices all talk to each other and create a single super Wi-Fi network that’s both strong and fast and can usually extend into your garden, if you have one.

You can read more about the differences between the cheapest and most expensive systems in our roundup of the best Mesh Wi-Fi, but our current top pick, which combines Wi-Fi and Powerline networking for great coverage and speed at a reasonable price is the TP-Link Deco P9.

The Devolo Magic 2 WiFi 6 Kit is another Mesh system that uses Powerline as its backbone, but supports WiFi 6 rather than just WiFi 5.

Powerline adapters are slowly being phased out and replaced by mesh Wi-Fi, but there is still a place for them—the Deco P9 kit uses the technology as we’ve just said. But traditional Powerline adapters can be the cheapest solution to extending Wi-Fi if you need to get a signal in one particular room, or even a separate building such as a garage.

Simply plug one adapter into a power socket near your router and connect it to the router using an Ethernet cable (usually supplied in the box).

Then plug the second adapter (which must be a model with built-in Wi-Fi) into a power socket in the other room such as a loft room, garage or other outbuilding. As long as any separate building gets its power from the main house where the router is located, it will work.

In most cases these create a new Wi-Fi hotspot—they do not boost the wireless network that already exists like a Wi-Fi extender. Powerline kits with Wi-Fi cost more than extenders but are much more versatile and can provide faster speeds.

Read our roundup of the best Powerline adapters for recommendations.

Wi-Fi extenders—also called repeaters or boosters—increase your Wi-Fi signal by ‘capturing’ the wireless signal from your router and then rebroadcasting it. Some people rightly wonder whether they really work: they do, but they’re not the best option if you need very fast Wi-Fi speeds.

You can use a Wi-Fi repeater to boost the signal from a router on a different floor of a house or on the opposite side of a building.

A repeater uses half its internal antennae to receive a wireless signal and the other half to transmit a new signal—effectively halving the potential speed of the original Wi-Fi signal.

This shouldn’t be that noticeable for light web browsing, email, etc, but can be felt when moving large files around the network such as high-definition video. That’s why we prefer Powerline for the more demanding tasks. But you might find it’s still perfectly good for streaming Netflix or YouTube.

A Wi-Fi extender needs to be placed in a central location, not too far away from the main router, as shown in the image above. If you put the repeater at the far edge of your main network hoping to strengthen the signal you will reduce the speed of your connection to the rest of the network and to the internet.

Remember that the extender is just boosting the signal. If it’s placed in a spot where Wi-Fi is already weak then it will merely push around that weak signal. Place it in an area with better Wi-Fi and the signal it pushes out will be stronger, too.

The ideal location for a range extender is half way between your main router and the intended wireless devices – in an open corridor or spacious room rather than a crowded space. It should be away from interfering devices such as cordless phones, Bluetooth gadgets and microwave ovens.

Wi-Fi can use one of two frequency bands: 2.4GHz or 5GHz. Many people think the latter is better because it offers faster speeds.

However, this comes at a price: range. The higher the frequency, the shorter the wavelength. And 5GHz signals cannot penetrate walls, ceilings, desks, and, yes, people as well as 2.4GHz signals. (Incidentally, this is why 5G is promising such fast speeds, because it uses much higher frequencies—called millimetre wave—but these signals have a tough time getting through glass, trees and even rain.

2.4GHz, on the other hand is better at delivering a signal over a greater distance, at slower speeds. That’s why you might be able to get better range from your router by forcing your phone or laptop to connect to your router’s 2.4GHz network. Many routers combine the two frequencies into one network name. That’s done for convenience, but it means you can’t choose which network to connect to.

If your router is like this, log in to the settings web page and look for a Wi-Fi menu where you can split the two frequencies into two separate network names.

It’s worth bearing in mind that 2.4GHz devices face a battle because lots of other things also use this frequency including microwaves, baby monitors, Bluetooth and more.

So your mileage may vary, but it is well worth understanding the difference between Wi-Fi bands, as you can use these to your advantage.

We have a separate step-by-step guide on how to change the channel your router uses to avoid interference.

And the very latest, but still expensive, WiFi 6E offers a third band: 6Hz, which offers additional headroom to a network, but this is for the future rather than today.