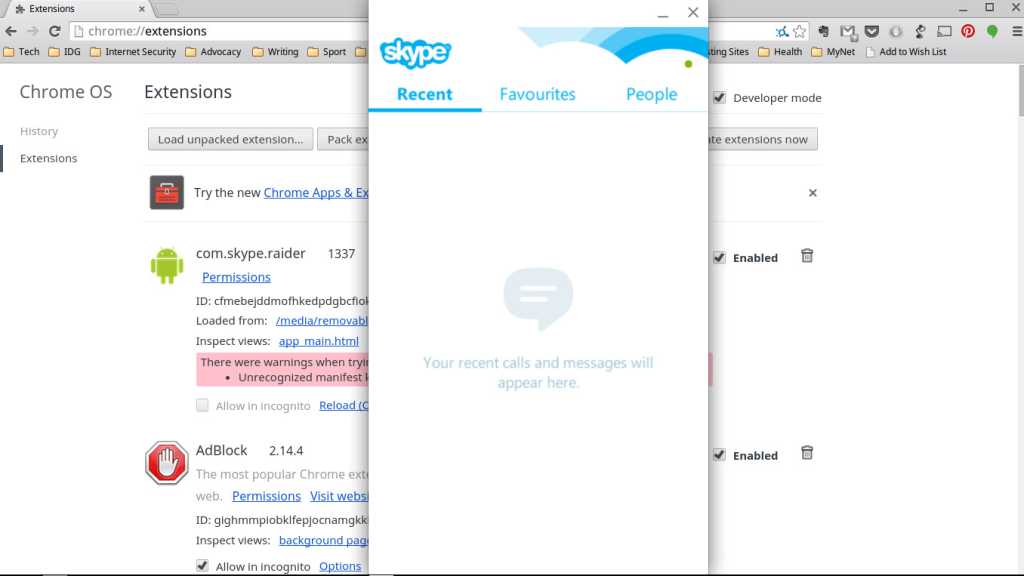 Update January 2017: According to Google, all new Chromebooks in 2017 will run Android apps with support for the Play Store out of the box. Google will maintain a list of Google Play-supported Chromebooks here. In the meantime, read on for advice on how to install Android apps on a Chromebook.

Chromebooks are excellent devices that offer great value and a surprising amount of capability.  This can be increased by the addition of Android apps, many of which can run on Chromebooks, albeit with a little help. Google recently announced the App Runtime for Chrome, which allows developers to adapt their Android apps to Chrome OS. So far four official apps have been released using this runtime – Evernote, Duolingo, Vine, and Sight Words – but with some effort it’s possible to get a lot more of them using this feature. Be warned though, performance can be very patchy, and during our experiments we encountered several issues that induced furious head scratching. But if you fancy a spot of gentle hacking, we’ll show you what you need to make this work, and how to do it.

How to run Android apps on a Chromebook: Downloading Google’s App Runtime for Chrome.

While you might expect a trip to some developer sight in order to find the Runtime app, it’s actually a lot simpler than that. To install it on your Chromebook all you need to do is download any of the four apps mentioned above (Evernote, Duolingo, Vine, or Sight Words) and the Runtime app is automatically included in the package. So head to the Web Store on your Chromebook, search for Evernote, then click to install it. Notice that there are more than one version of Evernote listed. Ignore the one entitled Evernote Web, as this is just a shortcut to the online version. 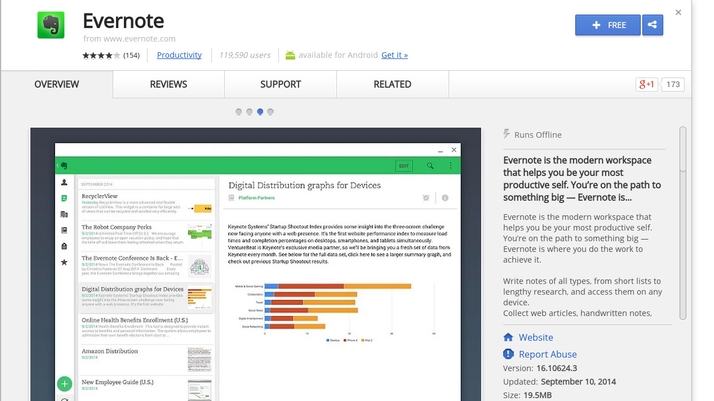 How to run Android apps on a Chromebook: Downloading an app APK

To install an Android app on your Chromebook you’re first going to need the APK, which is the basic equivalent of an EXE file on Windows or a DMG on OS X. You’ll need to do this on a Windows or OS X machine, as Chromebooks can’t run the repacking software we’ll be using in the next step. Google the app you want, making sure to include APK in the search. Be careful when going to the listed sites as many of them have big Download Now buttons that are often for the adverts next to them rather than the file itself. Take your time, make sure you check that you’re clicking on what you actually want, then you’ll be able to download the APK instead of some dodgy browser plug-in. 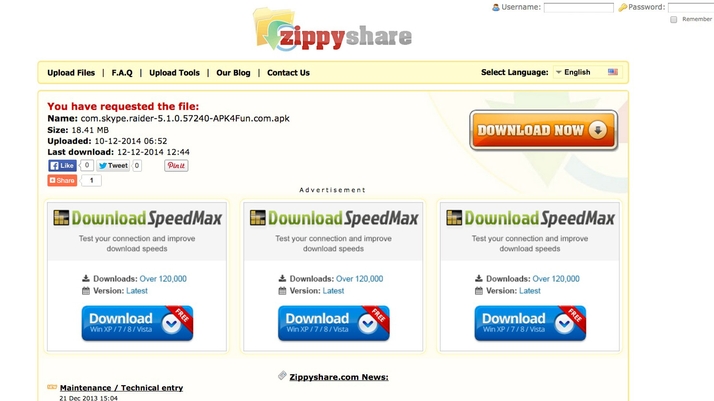 How to run Android apps on a Chromebook: Converting the APK

Now you have the APK you’ll need to repackage it for Chrome OS. This might sound somewhat intimidating but it’s only a couple of lines of code. We will need another piece of free software though, which can be found at nodejs.org. So visit the site, go to the downloads page, then choose the version of Node-JS that works on your system. 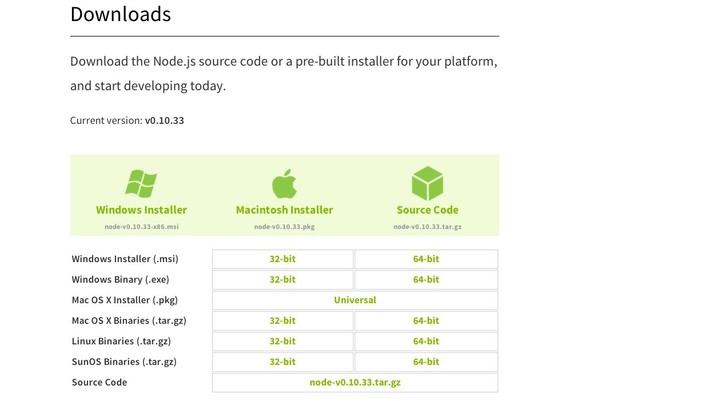 Before you launch it remember to note the name of the APK file, and in which folder it currently resides, as we’ll need to navigate to it manually. 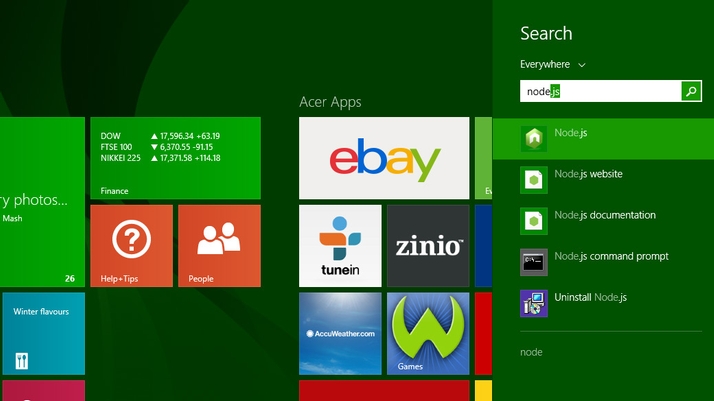 Load up nodejs and then enter the following command;

If you get an error message saying ‘npm should be run outside of the node repl, in your normal shell’, then close the windows, open up the normal terminal window by searching for Command Prompt, then enter the following;

then run the original command again.

Now you’ll need to change to the directory that the APK file is in. For ease we’ve used a USB drive. Check Windows Explorer for the correct path then navigate to that one, like this.

d: (which changes our current place to the USB drive)

then enter the following command

You should have seen some green writing appear below the command telling you that a directory was created. This means the APK is ready. 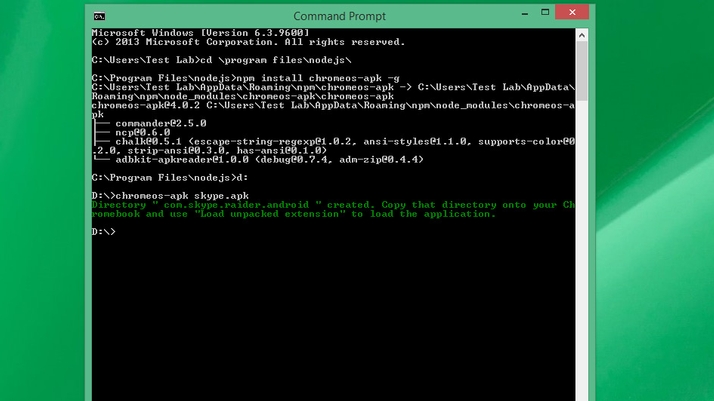 Make sure that the new APK is on your USB stick, then plug it into your Chromebook. With a browser windows open go to the settings option (the three lines in the top right corner) then select More tools>Extensions. Now tick the box in the top right corner marked Developer mode, and another button bearing the legend ‘Load unpacked extensions’ will appear. Click that. 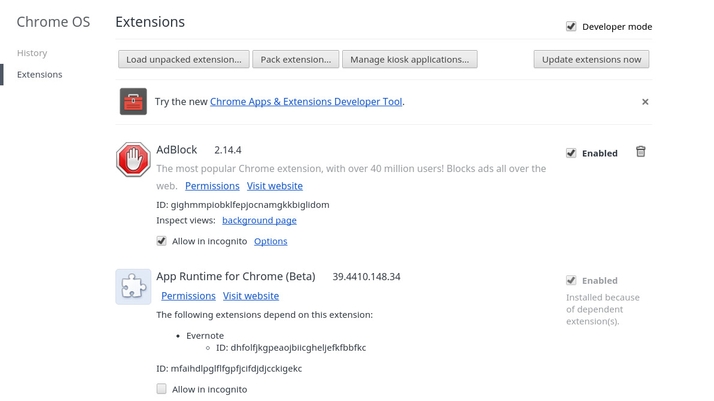 If everything is working correctly you should see a pink warning appear under the name of your new Extension. This is fine and can be ignored. It you have any other error messages, and we has several throughout the process of writing this guide, then we suggest you Google the message and you will find plenty of solutions already online.

The last thing to do it hit the launch option under the pink message, then watch your Android app load up on a Chromebook. It must be said that some work better than others, and Skype was very flaky on our HP 11” Chromebook, but if you really want to dabble then there are plenty of apps that will be perfectly happy on your little laptop. 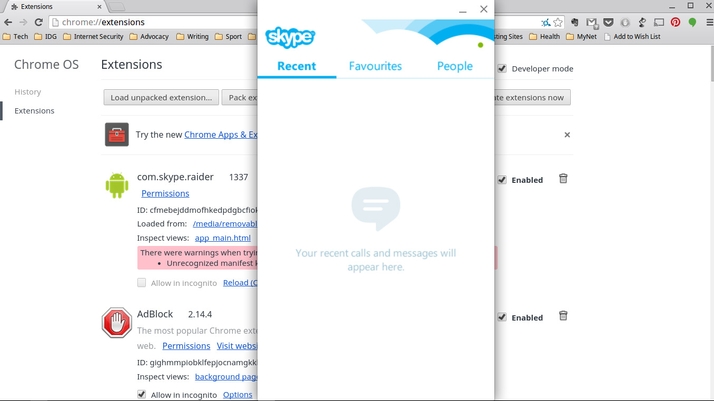