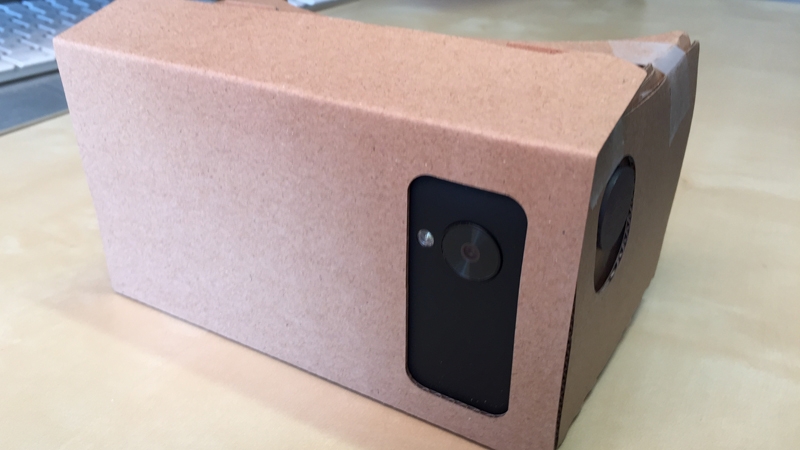 Update 1 March 2015:  Google now has an official VR headset page which links to certified ‘Works with Cardboard’ headsets. Apparently, Google is also selling its own second-gen Cardboard viewer but there’s currently no link to buy this on the page, but when we get the link to buy it in the UK, we’ll update it here. Some of the headsets are better made and more comfortable: Mattel’s View-Master has been updated for 2016 and costs a reasonable £22.99 from Smyths. If you do buy a headset like this, make sure your phone will fit – the View-Master works with iPhone 5, 5C and 5S only. 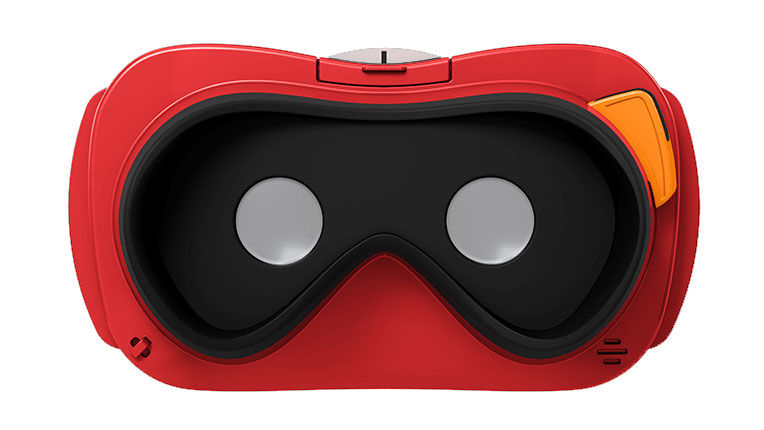 Does Google Cardboard work with iPhone?

As of 28 May 2015, yes it does. Along with Google Cardboard v2 Google announced that its SDK was now available to iOS developers, and that the button inside the new headset works with any phone. There isn’t a great many VR apps out there for iPhone, but expect that to change very soon. Some of those available now include Dive City Coaster, The Height, Dive Zombie, Moorente and Stereoscopic Tunnel Effect.

Where to buy a Google Cardboard kit in the UK

A variety of Google Cardboard headsets are available on Google’s VR site, both first- and second-generation, or head over to Amazon and you’ll find headsets from just £3. Note that some are supplied without head straps and NFC. Having thrown out our original Google Cardboard (cardboard and sweaty foreheads aren’t a good match when passed around a busy office for everyone to try – yuck), we’d highly recommend a darker or non-cardboard model.

The catch of getting Cardboard on the cheap can mean you’ll find no instructions, inferior lenses and a generally cheaper build. And as we mentioned, there may not be a head strap or NFC. Buy a more expensive one and it may even be pre-assembled. Still, it all does the same thing.

How to make a Google Cardboard VR headset

Step 1. If you’ve ever completed an old jigsaw that you’ve found lying in the loft, you’ll know how important it is to make sure you have all the pieces before you begin. In the box you should find two lenses, two magnets, two Velco pads and three pieces of cardboard. You’ll need to supply your own Android phone, obviously, which must run Android 4.1 or later and have no larger than a 6in screen. 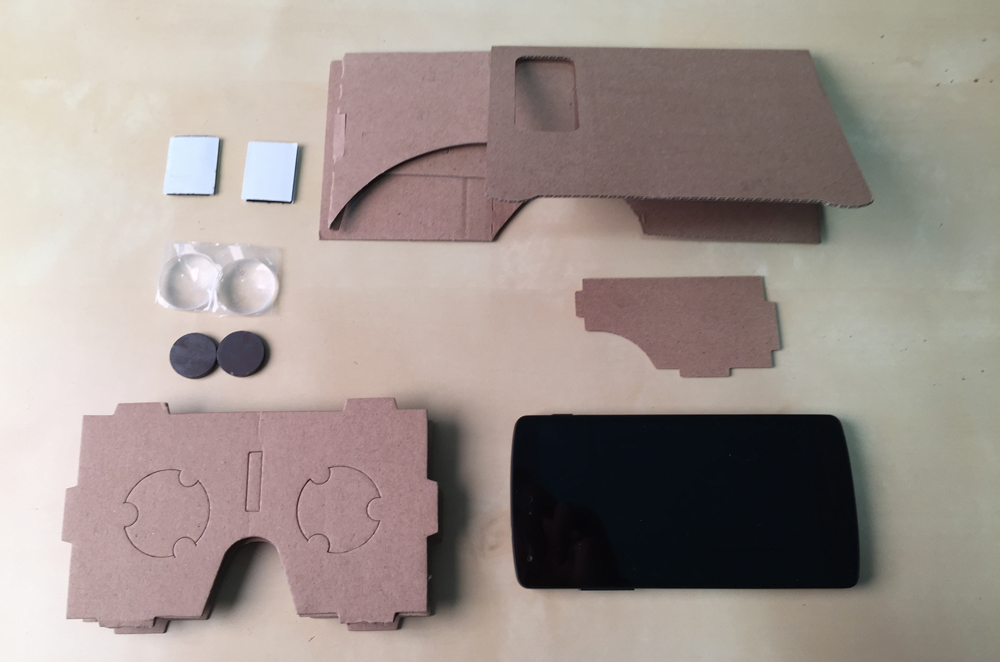 Step 2. This is the annoying bit. The cardboard has been pre-cut, but the unwanted material has not been removed. You’ll need to carefully press out the cutouts without ripping or bending the card. That shouldn’t be too difficult, though: it’s pretty sturdy. 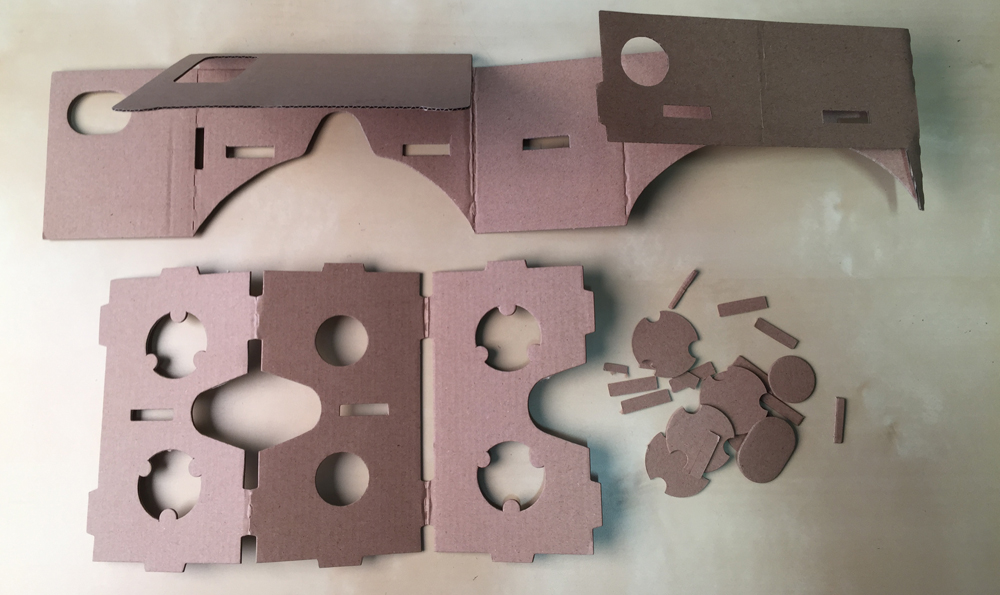 Step 3. Place the two supplied lenses in the large circular holes (it doesn’t matter which way around they go), then fold the cardboard around the front and back to keep them in place. You can use a bit of tape or glue to secure them if necessary. 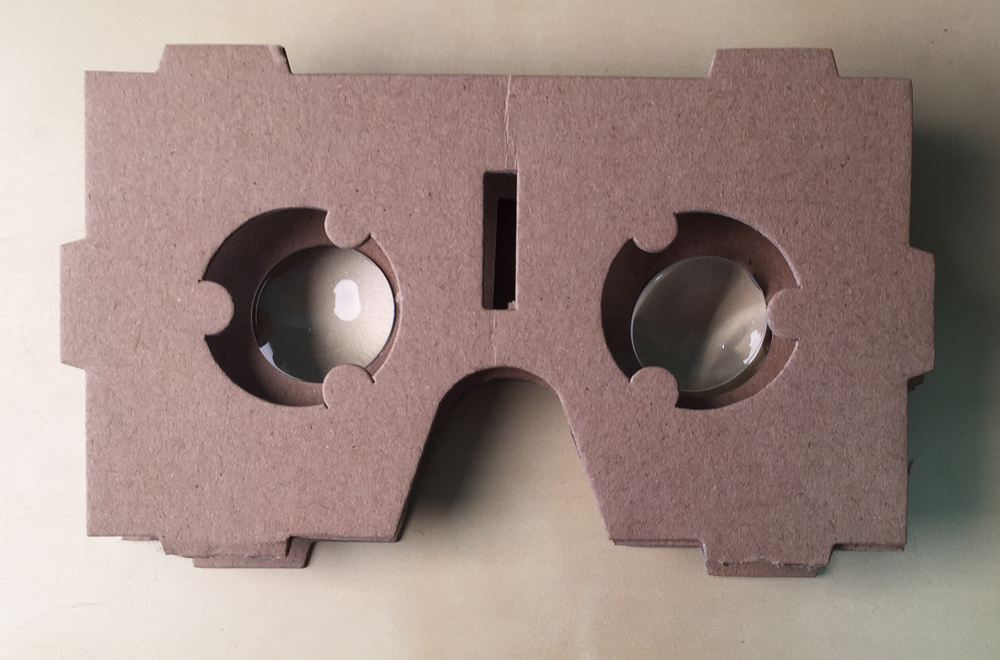 Step 4. Fold the main piece into shape starting with the section shown in our photo. The circle should face inward, and is used to hold the magnets. Again, you can use glue or tape if you like, but it’s not necessary. 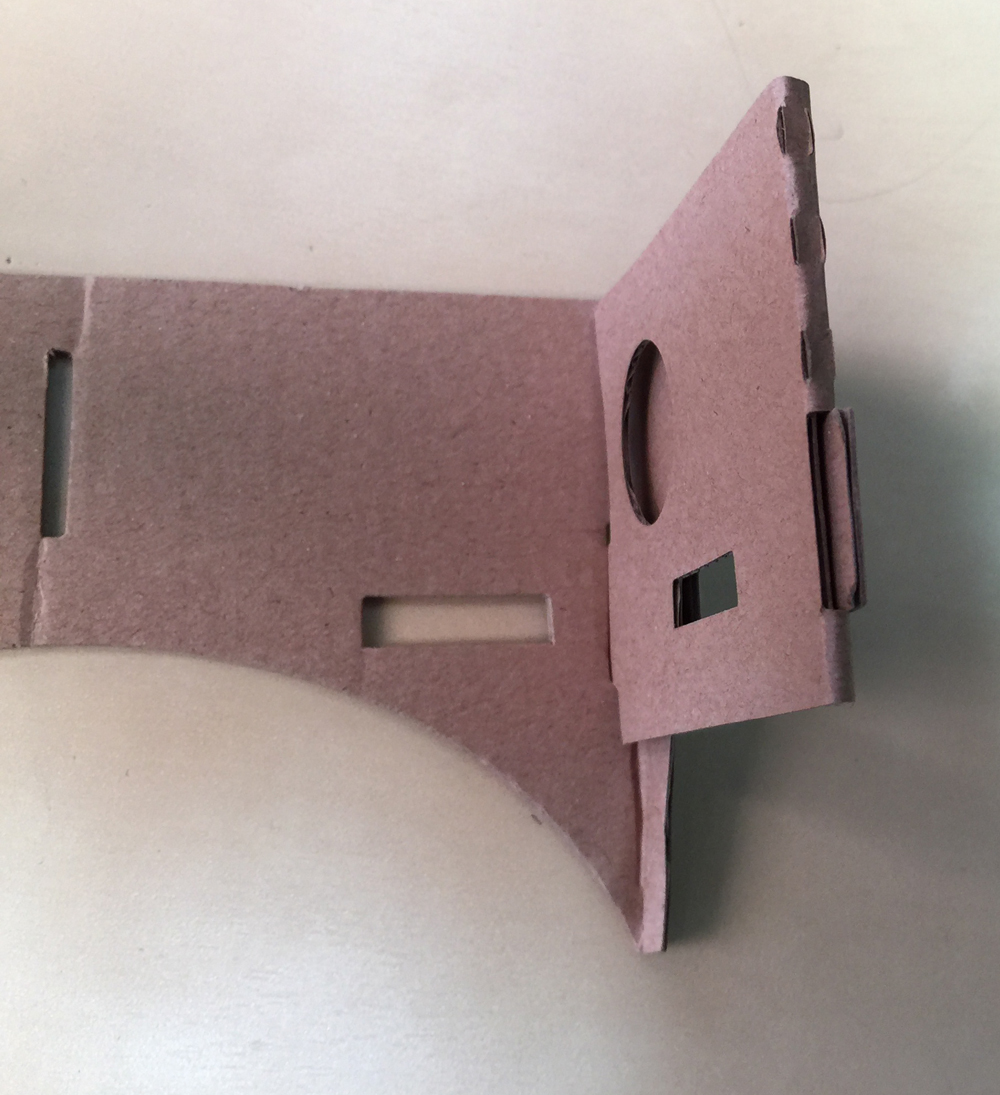 Step 5. Now fold this component around the piece with the lenses, with the centre hole facing the front. The small divider piece slots in here to make sure each of your eyes see only the images intended for them. 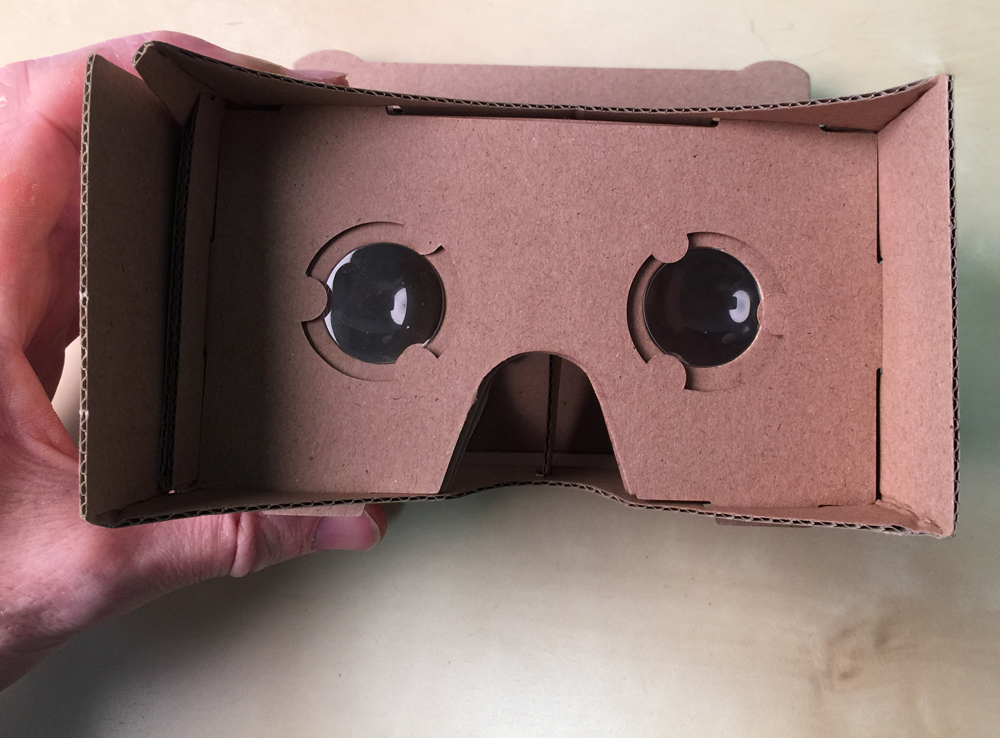 Step 6. Create an easily opened yet secure compartment for your phone by using the two Velcro pads to fasten the flap to the top of the headset. 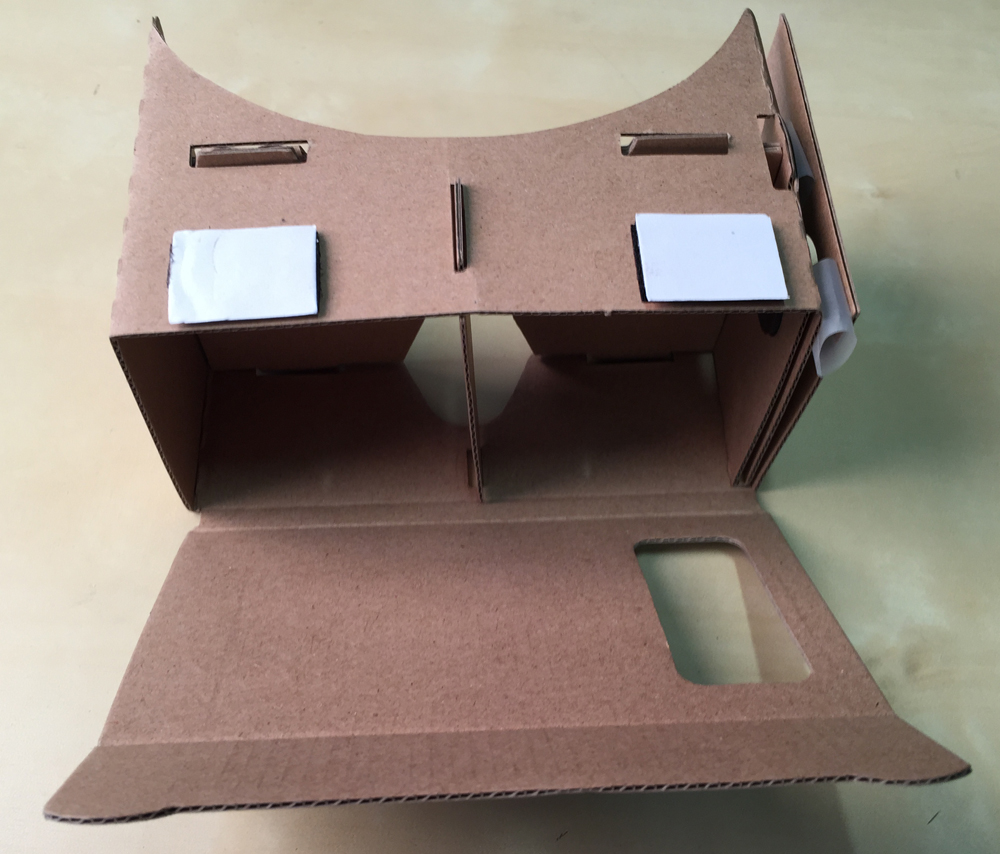 Step 7. Next you need to download the Cardboard app from Google Play. It’s a large app – 74.63MB – so make sure you both have room on your phone and that you’re connected to Wi-Fi.

Step 8. Place your phone inside the Google Cardboard headset so that the camera can be seen through the cutout. It looks as though it won’t fit because the divider is in the way, but the Velcro should give you enough wiggle room to secure your phone in place. Note that you might need to take off any case you might be using first. 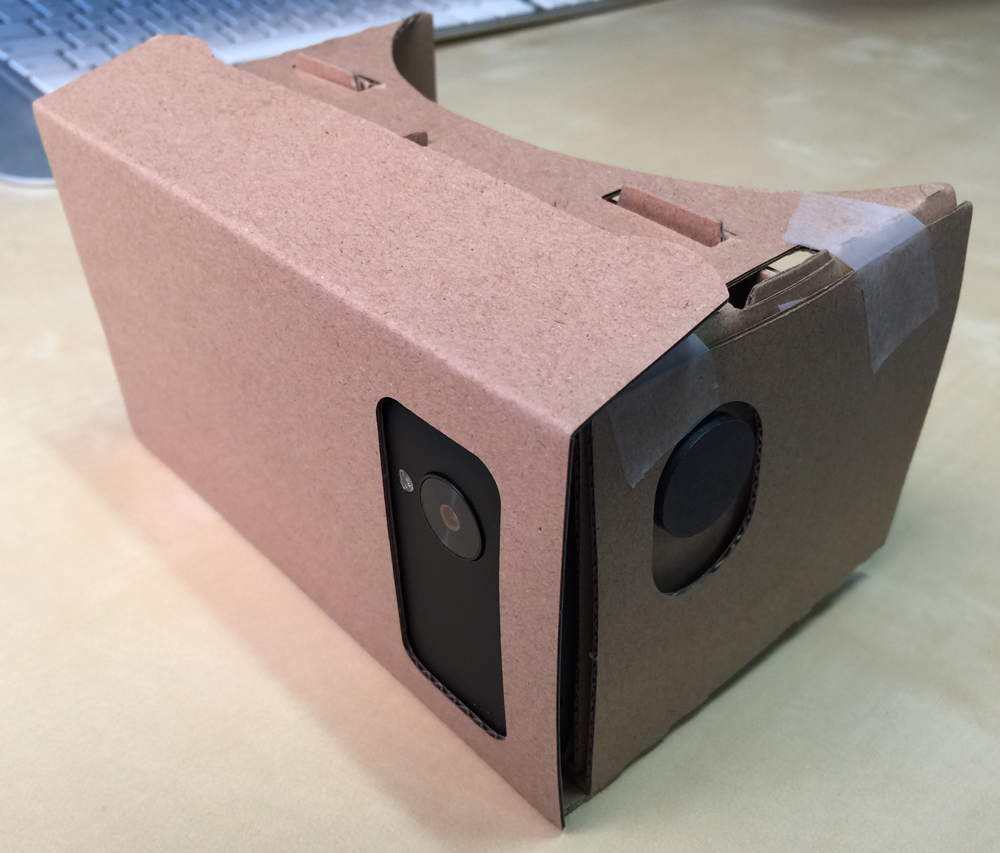 How to operate Google Cardboard

With the Google Cardboard app launched and your phone inside the headset, you’ll feel it vibrate. You can then look left and right to scroll through the menu – from Tutorial to Tour Guide, Exhibit, Windy Day, Earth, YouTube, Photo Sphere and Street Vue.

All the apps are cool – we particularly like Windy Day, a cute game in which you have to search the forest for a mouse – but they are relatively limited. For example, with Exhibit you get to look at only one item; in Google Earth you get to explore only one corner of the world; and in Street Vue you don’t get to pick your street or where you go. 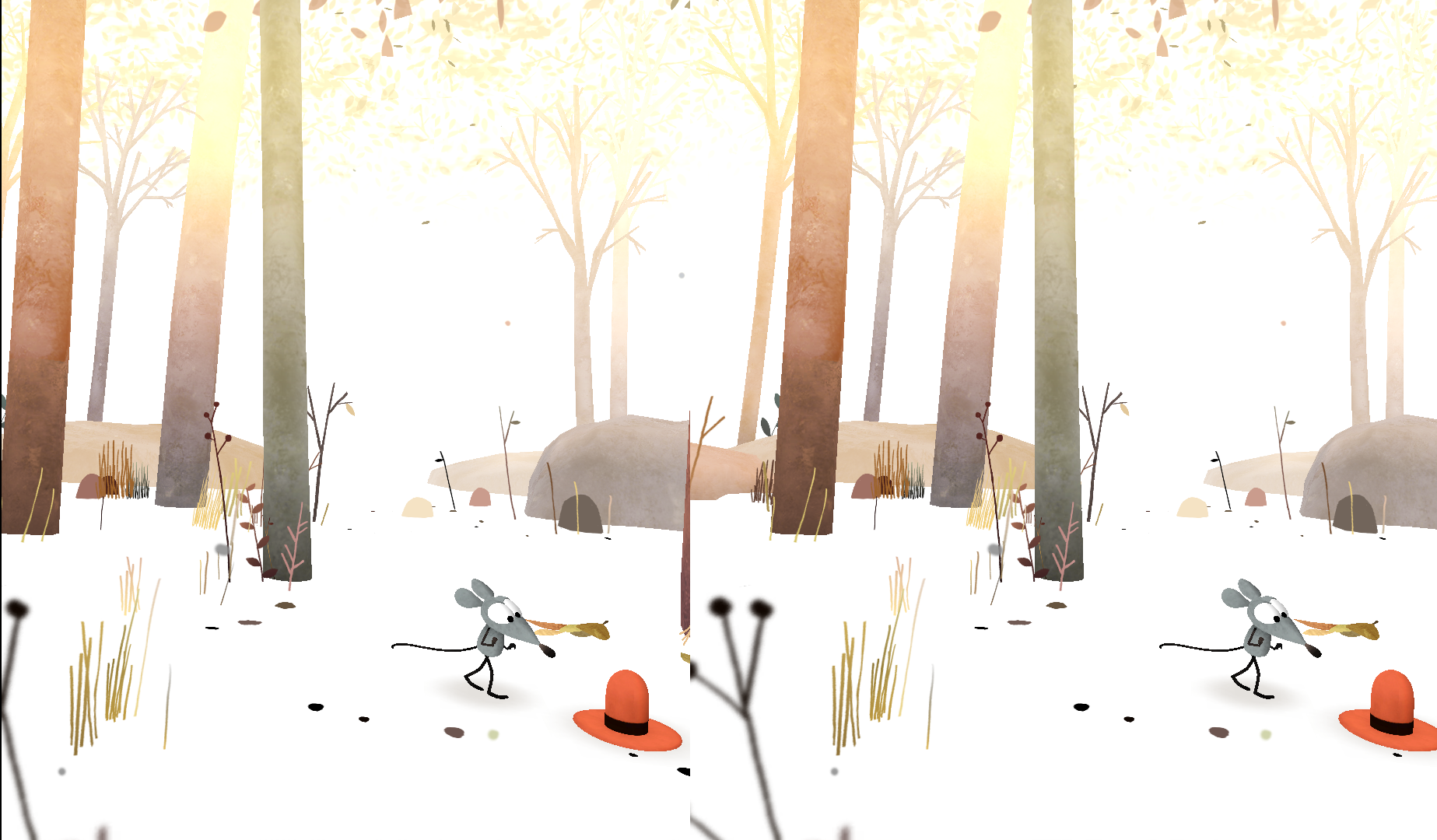 YouTube is one of the best of the bunch: you look around left and right to see multiple video screens, then stare at one and pull down the magnet to play it. The video will open on what looks like a cinema screen, from which you can look down to select voice search. 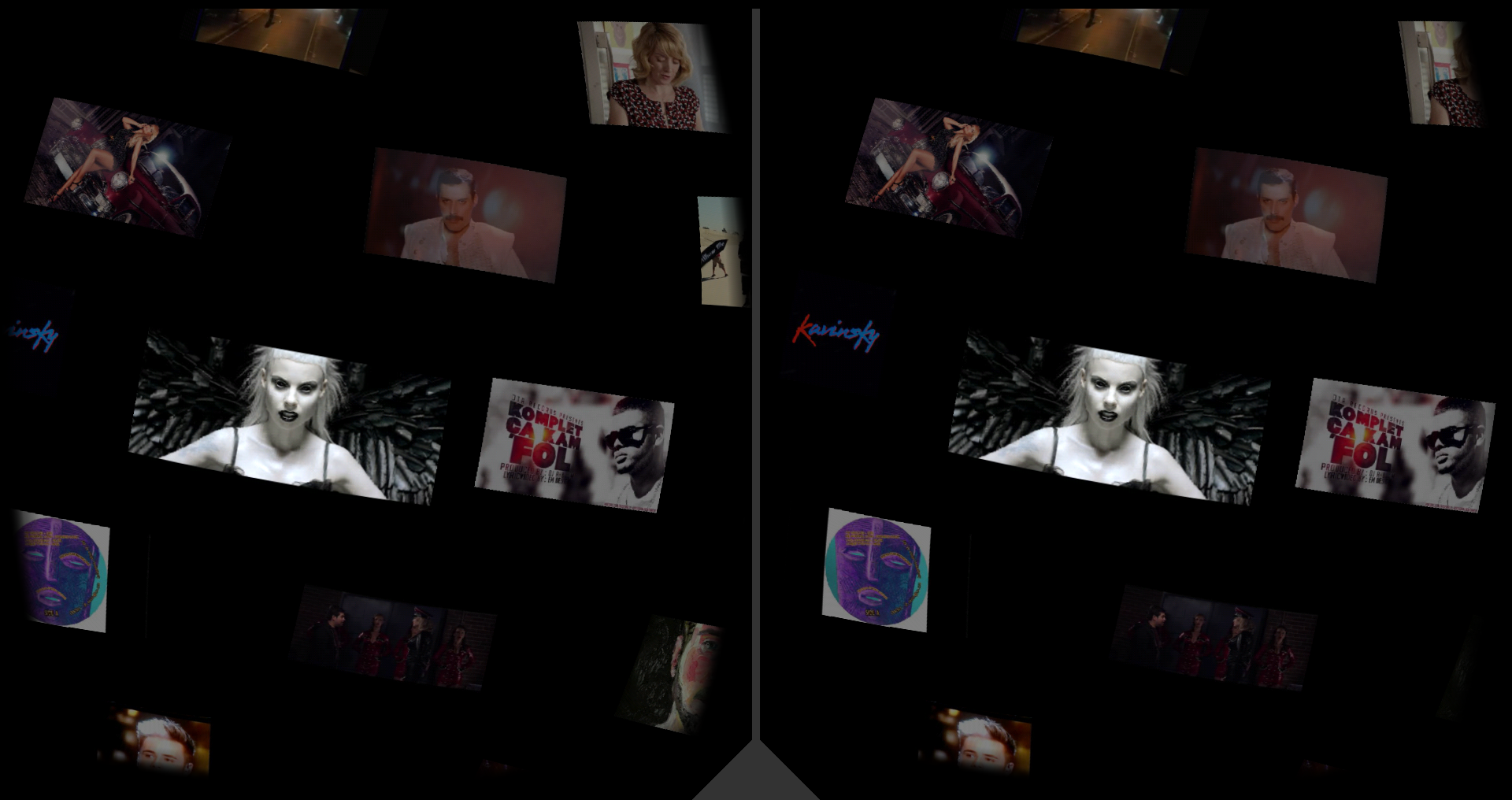 It’s difficult to tell from our screenshots, since they are unable to separate the view for each eye, but the experience really is cool.

It won’t be long before you get bored with what’s available, though, so you’ll want to download some new apps. Check out our pick of the Best Google Cardboard apps.