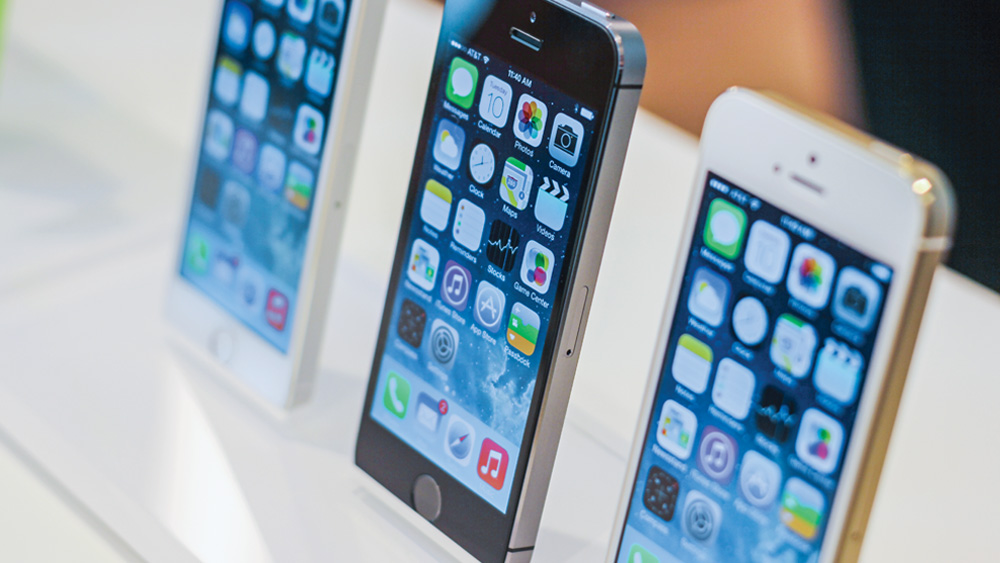 For many people using smartphones today, a telephone call will come some way down a list of communication priorities, now that text, emails, IM, Skype, Twitter and assorted social networks fulfill most personal needs.

But if you do require that real-time chat, there is still the option to dial out and chat over the GSM mobile network. Shame then, in this ultra-high-definition video world, that most of the time for most of the people that chat will still be of such low audio quality.

Have you ever wondered why the sound of a phone call on your mobile is little different to that experienced by your parents, or even grandparents, when they used the GPO landline many decades ago? There is sign of improvement to the situation though, a not-so-new technology that is being slowly rolled out across the UK mobile networks, although to hear the benefits requires several strict conditions to be met.

The technology is variously called HD Voice (a proprietary name coined by video-conference specialist Polycom), or generically as ‘wideband audio’. It has been commercially available for five years and even now in 2014 has limited availability within the UK.

HD Voice: Voices on the line

Capturing and sending the human voice for a telephone call in the digital age is like any other sampling of real-world ‘analogue’ data. Here ‘digital quality’ can mean sublime life-like preservation of the original – but so often it is severely compromised and weakened by commercial or technological requirements.

In the case of telephone communications, we now have the capability to conduct phone calls anywhere from 1920s crackly quality up to nearly CD-quality; but wireless connectivity issues and the need to cram in as many concurrent calls as possible to maximise profit usually means we’re only provided with calls at the lower, early-20th century, end of that spectrum.

When digital mobile phones were first launched with the GSM (Global Systems for Mobile telecommunications) in the early 1990s, the standard voice codec was GSM-FR (full-rate), which required a datarate of 13Kb/s, and then only provided mediocre quality. But it was at least better than its Half Rate alternative running at 6.5Kb/s.

These codecs have now been largely replace by either GSM-EFR (enhanced full-rate) which runs at about the same datarate as GSM-FR but with quality closer to a landline connection; or the later adaptive multi-rate (AMR) narrowband codec, which technically close to today’s HD Voice technology. With both these two latter ‘telephone-quality’ audio codecs, the resulting call is quite comprehensible but far from high-fidelity.

The audio bandwidth of these systems – that is, the range of frequencies that can be reproduced – is less than 4kHz, and focused on just the midrange frequencies that dominate in the spoken voice. In the case of AMR, the digital sampling frequency is 8kHz, which can only provide theoretical bandwidth to a maximum of half that frequency; in actual application it nominally extends from 200Hz to just 3.4kHz. Compare this with the bandwidth of the spoken voice of between around 80Hz and 14kHz. 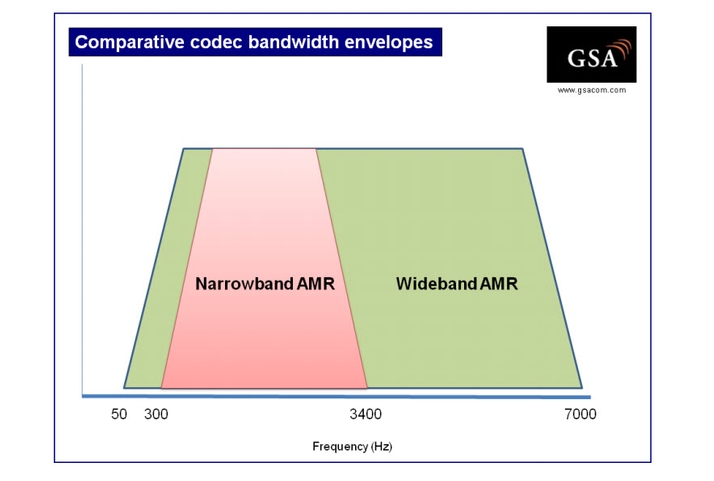 HD Voice is based on a codec named G.722.2, and also known as AMR-WB – adaptive multi-rate wideband. It’s still far from high-fidelity specification, using 14-bit sampling and 16kHz sampling frequency, but at its best can reproduce sounds from 50Hz to 7kHz. In other words, the nominal range of frequencies that make up our speech.

With the correct setup of modern smartphone and network provider, the result can be clear, crisp and cleanly intelligible speech. Heard in your eyepiece after familiarity with restricted and grainy regular calls, it comes as a sonic revelation.

Better voice fidelity helps reduce cognitive load – that is, we need not concentrate so hard to make out the sense and meaning of the speaker’s conversation. This will be enormous benefit when used in a car, for example, when the driver needs to focus on safely driving the car.

Wideband audio reduces the confusion between spoken letters and numbers, such as the classic mishearing of ‘f’ and ‘s’ which are rendered almost identically in narrowband transmissions. Regional dialects or foreign accents are more easily understood, and differentiation between muliple speakers on the line is made simpler.

In order to experience wideband audio in a mobile phone call, you must have a suitable handset and be using a network that supports the technology. Additionally both these two conditions must be met by the person to whom you’re calling.

Supporting networks in the UK

The first UK network to offer wideband-audio mobile telephony was Orange, which rolled out its HD Voice service in 2010. Next up was Three in the following year, and then T-Mobile in 2012.

EE – the joint venture of Orange and T-Mobile founded by the merger of the two companies in 2010 – supported HD Voice from its inception in summer 2010.

Unlike its overseas divisions in Ireland, Australia and New Zealand, British operator Vodafone has been slower to support wideband audio in the UK. We asked Vodafone for an update and were told ‘we are currently rolling out HD voice technology across the UK’.

‘The rollout is well under way and will continue until late summer when we plan to have introduced the technology across our entire 3G UK network. The service is available between Vodafone to Vodafone calls and customers will automatically switch to HD Voice technology when in coverage including those on our 4G service (when their phone connects to 3G to make calls).’

This leaves O2 as the only UK network without the facility, and with no official plans to add it either.

The image below shows which countries (in red) have HD Voice services: 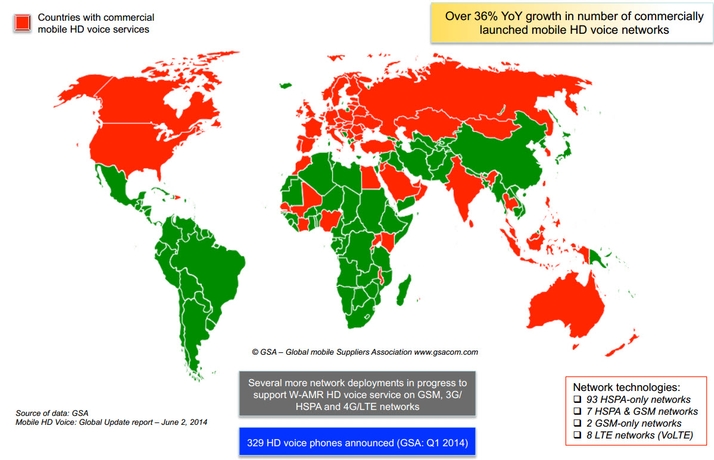 Many of the current popular smartphone handsets can support wideband audio voice calls. The current series of Apple iPhone 5 all support AMR-WB, including iPhone 5, 5s and 5c; older iPhone series models do not.

Smartphones running Google Android with wideband audio support include the Samsung Galaxy, from S2 to S5; many Sony Xperia models; HTC One and its similarly named models such as One M8, One S and One X; and LG models such as G2, G3 and Nexus 4 and Nexus 5.

Besides the right network and the right handset, there is one principle impediment from preventing wideband audio calls from becoming more prevalent. At present, both parties must be subscribed to the same mobile network.

So a telephone call between two Three subscribers each using an iPhone 5, for example, will benefit from the improved sound quality of HD Voice. But if one caller is with Three and the other EE, the call will be with traditional narrowband quality.

We asked all current participating wideband audio-capable UK networks to explain the obstacle that prevents cross-network compatibility. It is unclear if the reason for low-resolution calls between operators is a technical one – such as slightly differing implementations of the 3GPP G.722.2 standard – or a commercial one. As a premium features, the UK companies may be withholding access to wideband audio calls in order to encourage subscribers to join or remain with their network.

At the time of writing, only Three had replied with an answer to this thorny question. The company has no immediate plans to extend beyond Three customers, it told us, and ‘to enable this in a practical way networks would need to move to an IP interconnect. This will come when UK operators introduce VoLTE’ (voice over LTE). This suggests that cross-network support of HD Voice will only be viable when 4G LTE becomes the dominant system in mobile communications.

A similar problem is presented with wideband audio calls between countries, although the first such breakthrough has already been made by Orange in 2012, with HD Voice calls between Moldava (the first territory in the world to introduce the technology) and Romania.

This chart shows the number of operators around the globe which support HD Voice. 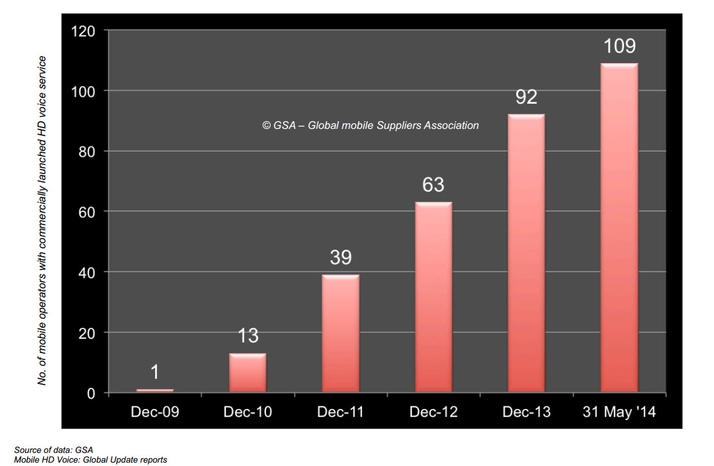 Besides the traditional phone call over GSM, there are other ways to enjoy better-than-telephone-quality voice chatting.

Most ubiquitous must be Skype, which as well as allowing the familiar video conferencing can also be used with an audio-only chat. Both of the popular smartphone platforms of Apple iPhone and Google Android includes apps that allow simple voice chats as well as video and IM. Microsoft now also includes apps for its Skype service from the Windows Phone platform – not surprising given that Microsoft bought Skype a couple of years ago.

The audio codec used by Skype is a proprietary wideband compression system it calls Silk, in use since 2009. Like the codecs used in HD Voice, it is adaptive to network conditions: with poorer/slower broadband connections it will drop to a lower audio quality to maximise intelligibility and reduce the chance of drop-outs that can remove syllables or entire words from a conversation.

Apple iPhone users are also able to use FaceTime for purely audio communications. Older handsets such as the iPhone 4 must connect to a Wi-Fi network first, while iPhone 5 and later can use FaceTime over 3G and 4G LTE.

We compared the three options of HD Voice over 3G GSM, Skype and FaceTime. With both callers using an iPhone 5 and connected to the Three mobile network, all three services provided superb voice clarity.

In the case of the 3G GSM call, we noticed that the iPhones’ noise-cancellation facility was engaged (where two or three micrphones spaced apart help to focus on the caller’s voice by subtracting ambient noise); but voice calls made through the purely IP-based Skype and FaceTime were subject to plenty of background noise. Given the resolving power of wideband audio, this could sometimes detract from overall intelligibilty, as distant sounds could be all-too effectively mixed with the caller’s voice.

Note that despite the popularly used name of HD Voice, the quality is not actually high-definition in the usual sense of better-than-CD quality. It is only used as a relative term compared to the very limited bandwidth of familiar narrowband telephony. But it is a significant step-up from the low-resolution telephone sound we’ve had to endure since Alexander Graham Bell first asked Mr Watson to ‘Come here – I want to see you’ with his first working acoustic telegraph apparatus in 1876; which later gained the altogether snappier name of ‘telephone’.